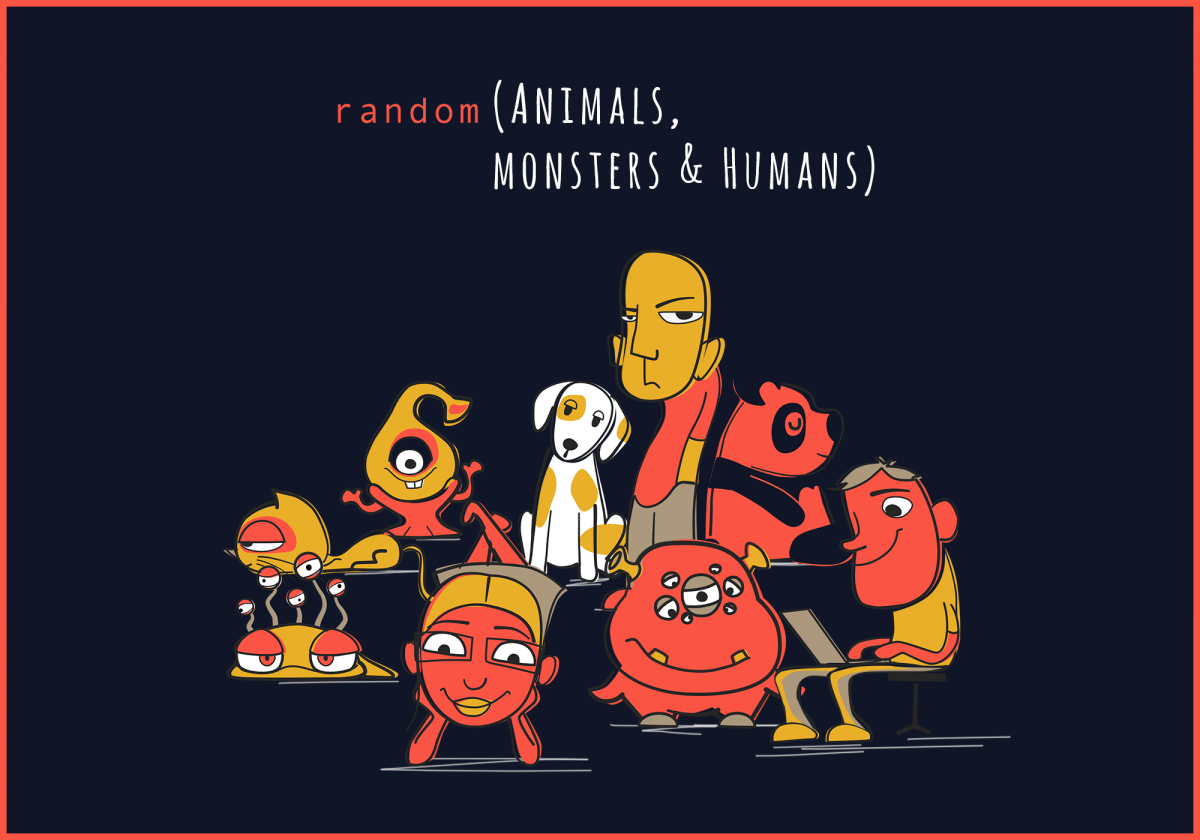 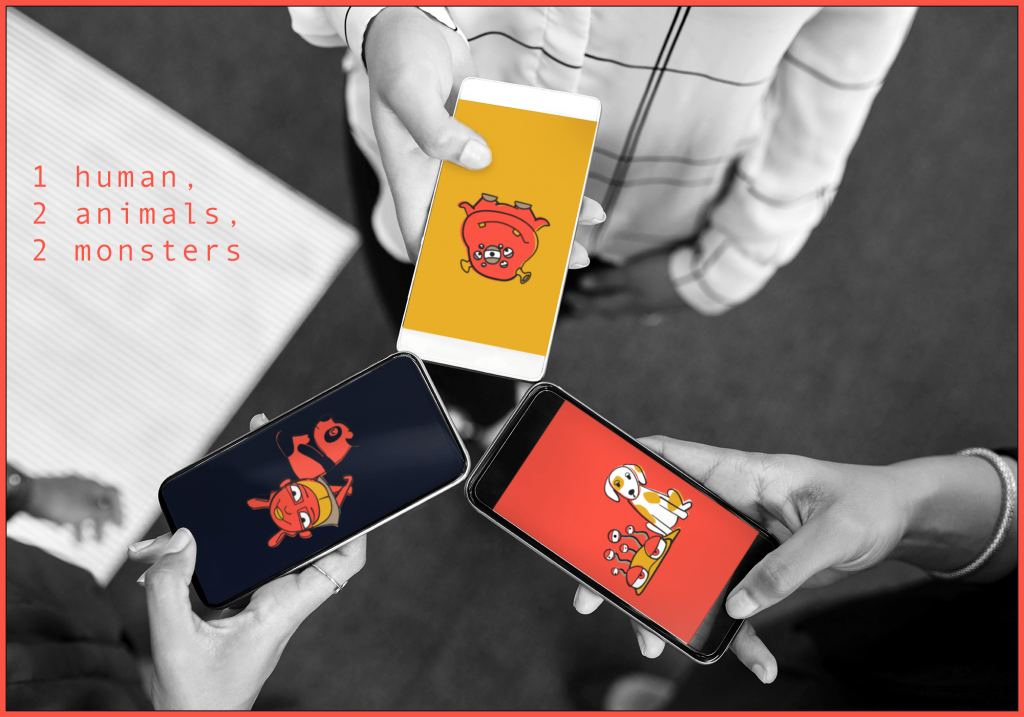 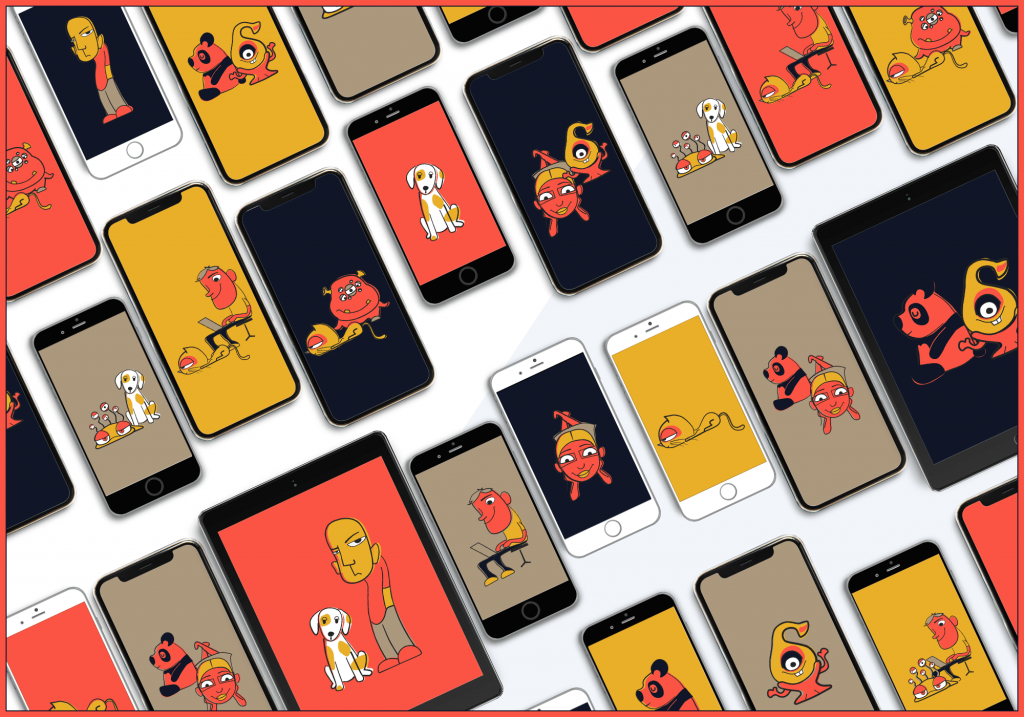 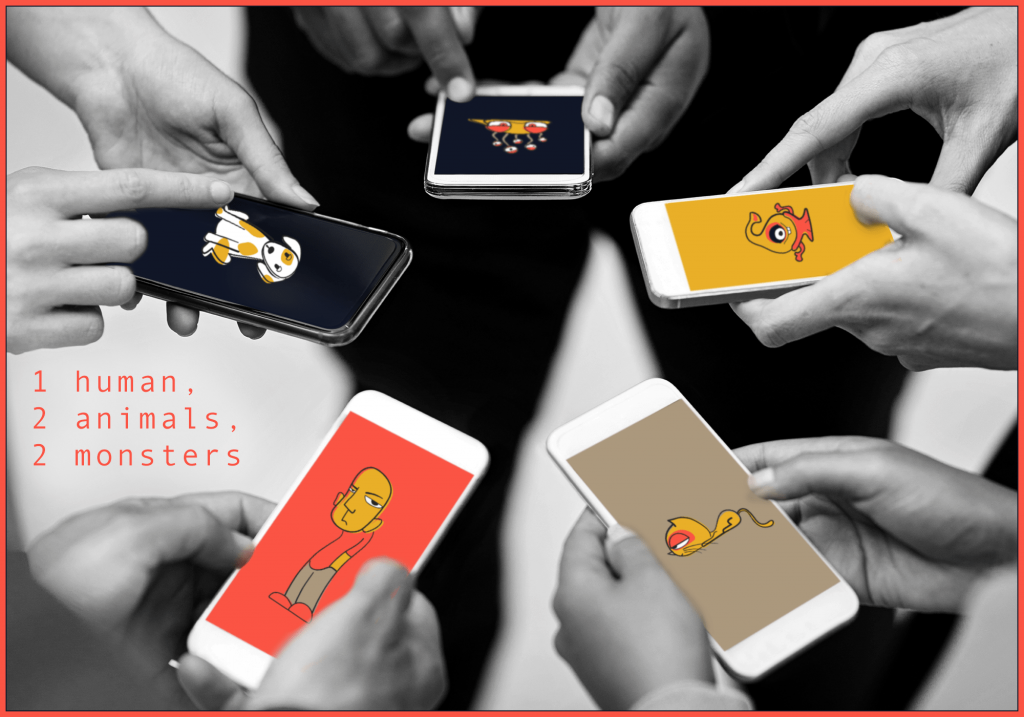 Random (ANIMALS, MONSTERS & HUMANS) is a smartphone-based interactive physical game experience. The game facilitates both person-to-person and person-to-phone interactions. It can be played with 20 players and up, in an open space.

It is a character-based game containing a variety of single and mixed sets of personas, which are either animals, monsters or humans. On hitting start, the code shuffles, randomises and assigns a persona or a mixed set to each player. This is completely random, based on when the participant chooses to stop the shuffle, thus leading to a dynamic range of character-sets on the floor. The host then announces a pairing condition between these animals, monsters and humans (for instance, 1 human, 2 animals, 2 monsters need to form a team). The players now have to group up with other participants in a way that their cluster meets the announced pairing condition. They then advance to the next round. This continues until we have a winner(s).

It was interesting to see how the game playfully turned out to be an integrity test, as some players sneaked in multiple shuffles to find a matching character, and thus survive longer in the game. 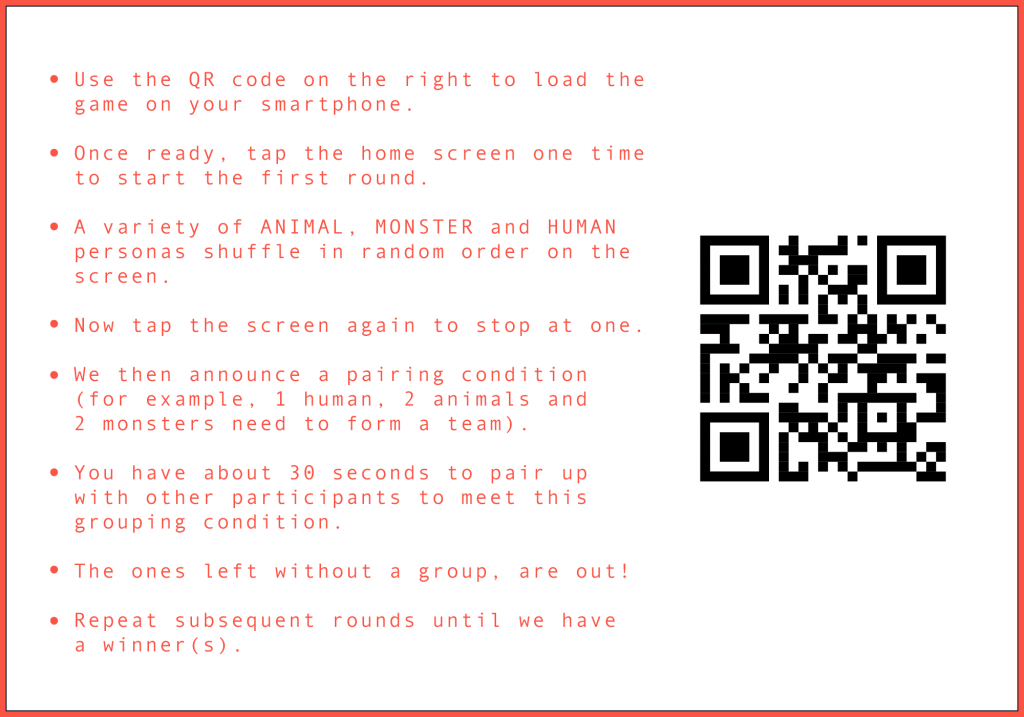 We explored and brainstormed to generate concepts that could weave in, what we thought was the essence of this experiment—creating one connecting experience with 20 screens without networking. We also wanted to build an engagement that allowed users to have fun. Some of the ideas that came to our minds were—creating a shopping aisle or gallery of unusual products, and using smartphones as interactive displays. Another one was building a world map installation, while using phones as different regions/cities around the world, and interactively depicting their landscapes, interesting facts. Although these concepts had quite a bit of creative scope and aligned to the initial brief, we realised they lacked the element of fun. We did a second round of ideas, drawing inspiration from ice-breaker games like Musical Chairs.[1] And that’s when we came across the ‘Group in the numbers of…’ game by Michael Hartley.[2] It involves each player to pair up with other participants and total up to match the number announced by the host. It was a simple concept, but had a potential to serve as a footing that we could build on.

Taking this concept further, we thought what if each player was allowed to have a dynamic, random number for each round. Visualising it in the digital context, smartphone was the ideal choice for introducing this twist.

Looking up for code resources, we realised that the math references could help generate a dynamic number with each click. Here is a process video of testing this out:

Furthermore, to lend an organic feel to the game, we brought character into play instead of numbers. We also sub-categorised the characters into families of animals, humans and monsters (earlier, aliens) with a view to introduce an additional layer of challenge. We further considered adding mixed set of characters to shake up the combination possibilities between participants as drawn below:Here is a process video of testing the functionality with images: 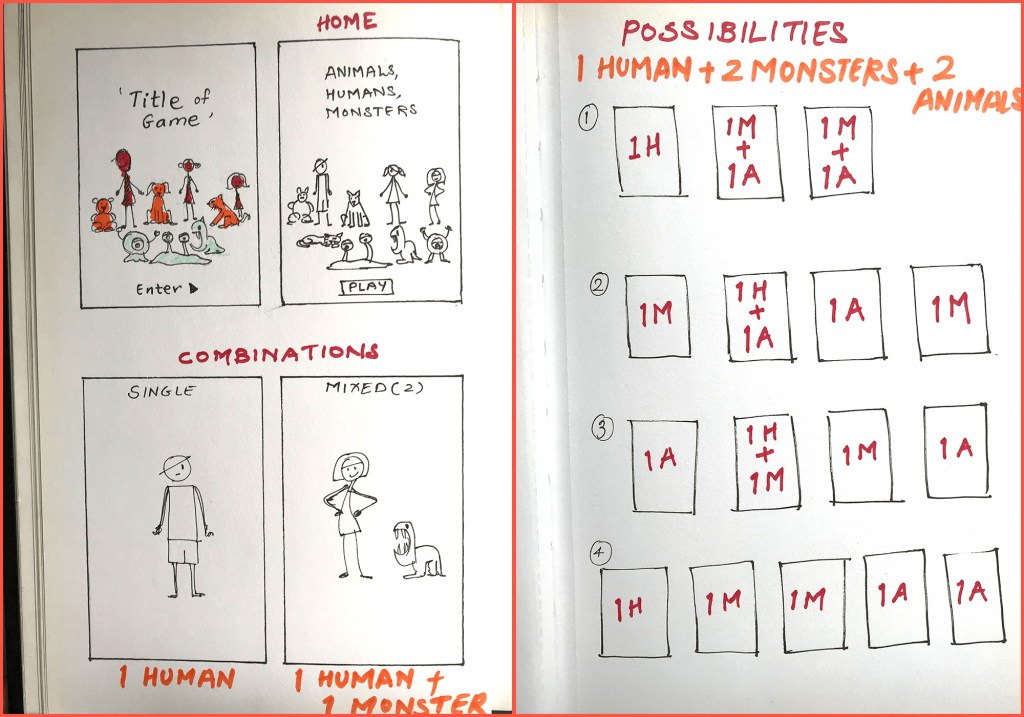 We mapped the flow of the game early on for two reasons—gauge the scope and plan for milestones, and foresee possible challenges. It was succinctly visualised as below:

We built on the random() functionality tested during prototyping. While developing the code with GIFs, we ran into a roadblock with using random GIF loops in place of the images. The GIFs somehow did not work on both browsers (Safari & Chrome). Looking up for references online about animated GIFs [2] , we encountered a way to play a single GIF, but the same logic did not cater to loading 18+ GIFs. We also realised using a repository of GIFs would take a toll on the loading time of the game due to relatively higher file size. To overcome this predicament, we decided to introduce color in our images. To compliment the idea further, we added a code to that resulted in a different background color, from the selected color palette each time. It thus increased image possibilities by multifolds, and making it less repetitive.

We were initially exploring graphic styles that would lend well to creating GIF loops. The purpose of including animated characters was essentially because they would add so much more life to the screen. We had narrowed down to the pixel art and the doodle style.

We went ahead with the doodle style (right), because it had more scope to bring out different character personalities using facial expressions. Below is are the character designs and GIF loop:

We were unable to proceed with GIFs midway through the development phase, we decided to alternatively uplift the visual aesthetics by adding colors using a 4-color palette. 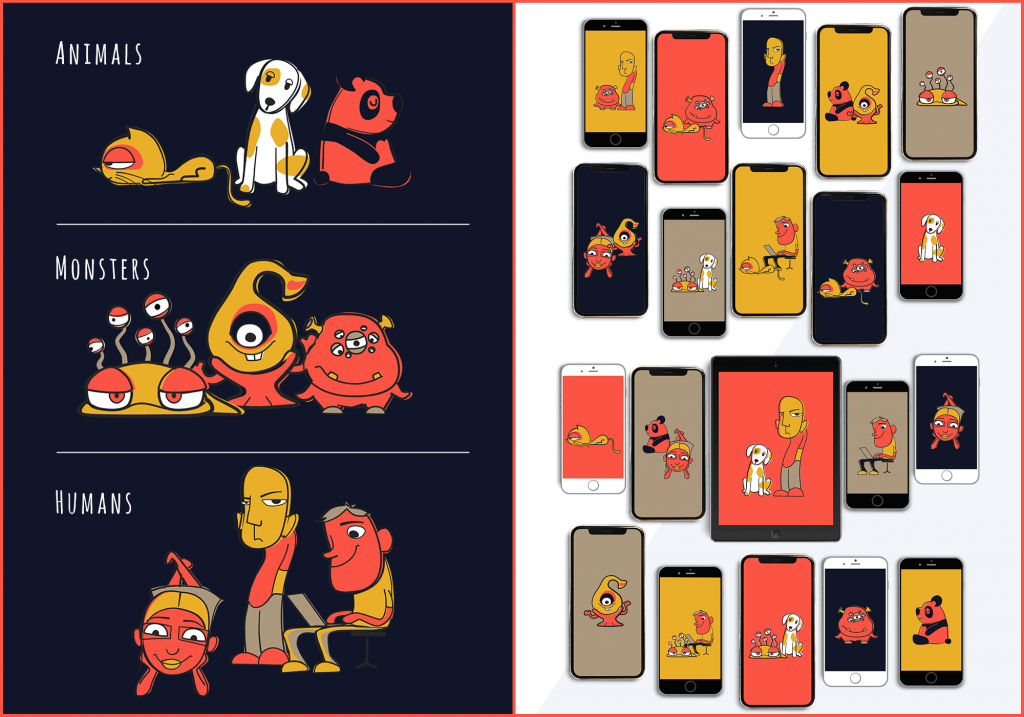 The idea of randomising the background color in code led to an even more diverse image repository for the game.

We launched the ‘random (ANIMALS, MONSTERS & HUMANS)’ game at the Creation and Computation Experiment 1 Critique on 27 September, 2019. The video features highlights from the round of this game played by our classmates: