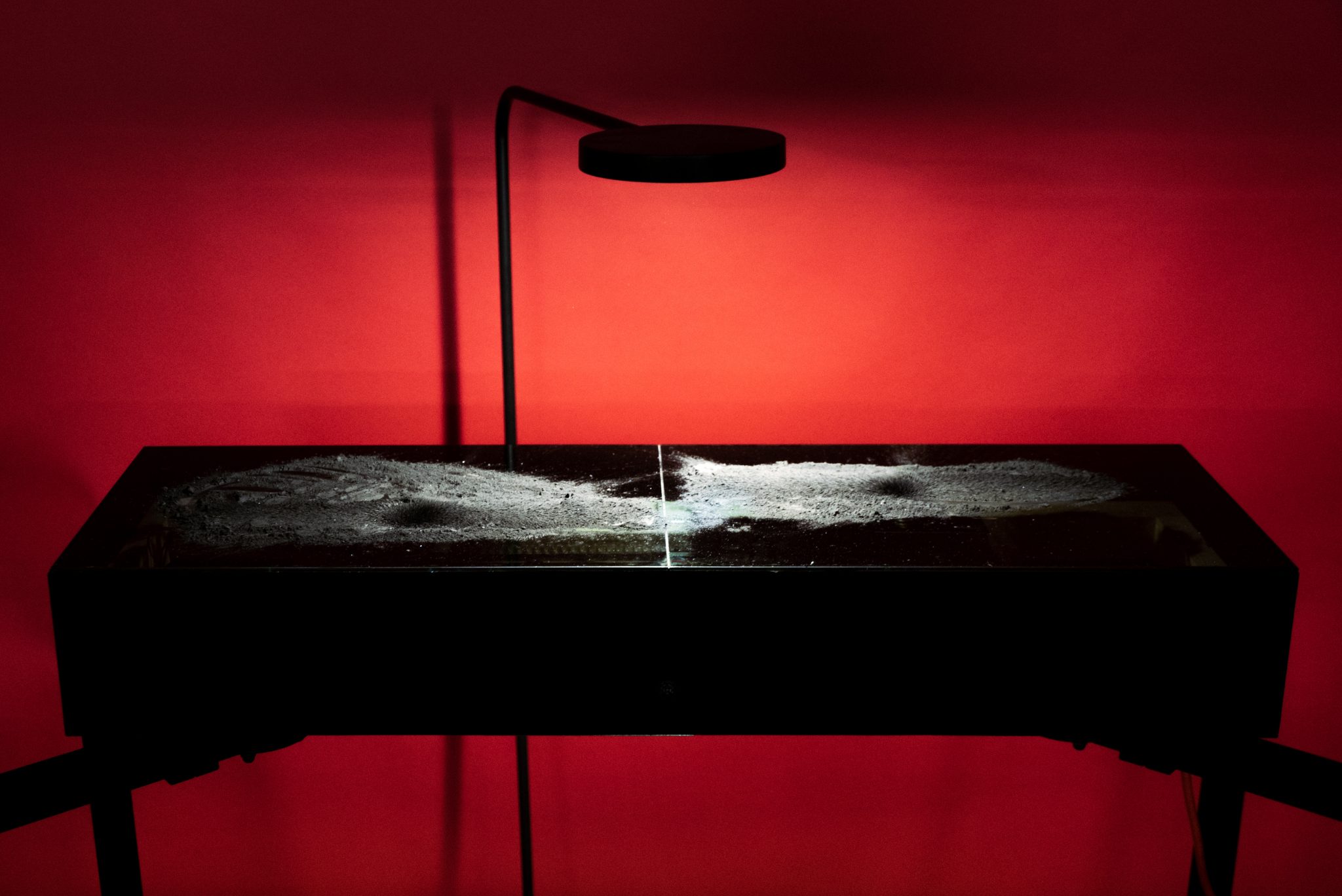 By Jessie, Liam and Masha

Antimaterial is an interactive installation that explores abiogenesis and kinesis to articulate a relationship between the human and nonhuman world. Just as we are able to affect our surroundings, the ability of magnetic materials to move matter indicated the presence of life to pre-Socratic philosophers. The rocks beneath our feet were not only the essential catalysts for life, but that microbial life helped give birth to minerals we know and depend on today. In Antimaterial, these concepts are explored as primitive life emerges within the topography of the material in response to human proximity, demonstrating a connection between animate and inanimate matter.

Drawn the freedom and possibility of exploration, from the start of the project,we all agreed to use creative material to create a tangible and experimental interactive art piece. With some of the team member’s previous experience with using water in their personal projects, we thought to use water as it’s a very versatile medium due to it’s free flowing form. Using tools such as a solenoid to tap on water to create ripples, or use speakers in waters to visualize sound waves with water were some of the many initial ideas we thought of. However, with water being a difficult medium to control the form of, we were worried that the final piece would end up looking like a jacuzzi, which led us to finetune to our ideas further.

After several sessions of brainstorming, we came up with the idea to mix water with some magnetic material to magnetize it which would also give us more control over its form. During our research, we found quite a few interesting projects that have guided us in new directions of exploration. Sachiko Kodama is a Japanese artist that dedicated the majority of her art practice to using ferrofluid and kinetic sculptures to making installations. By combining ferrofluid which can be a messy medium at times with kinetic sculpture which is inherently neatly structured, her works usually create order and harmony amongst chaos and come off as intriguing as well as energetic. 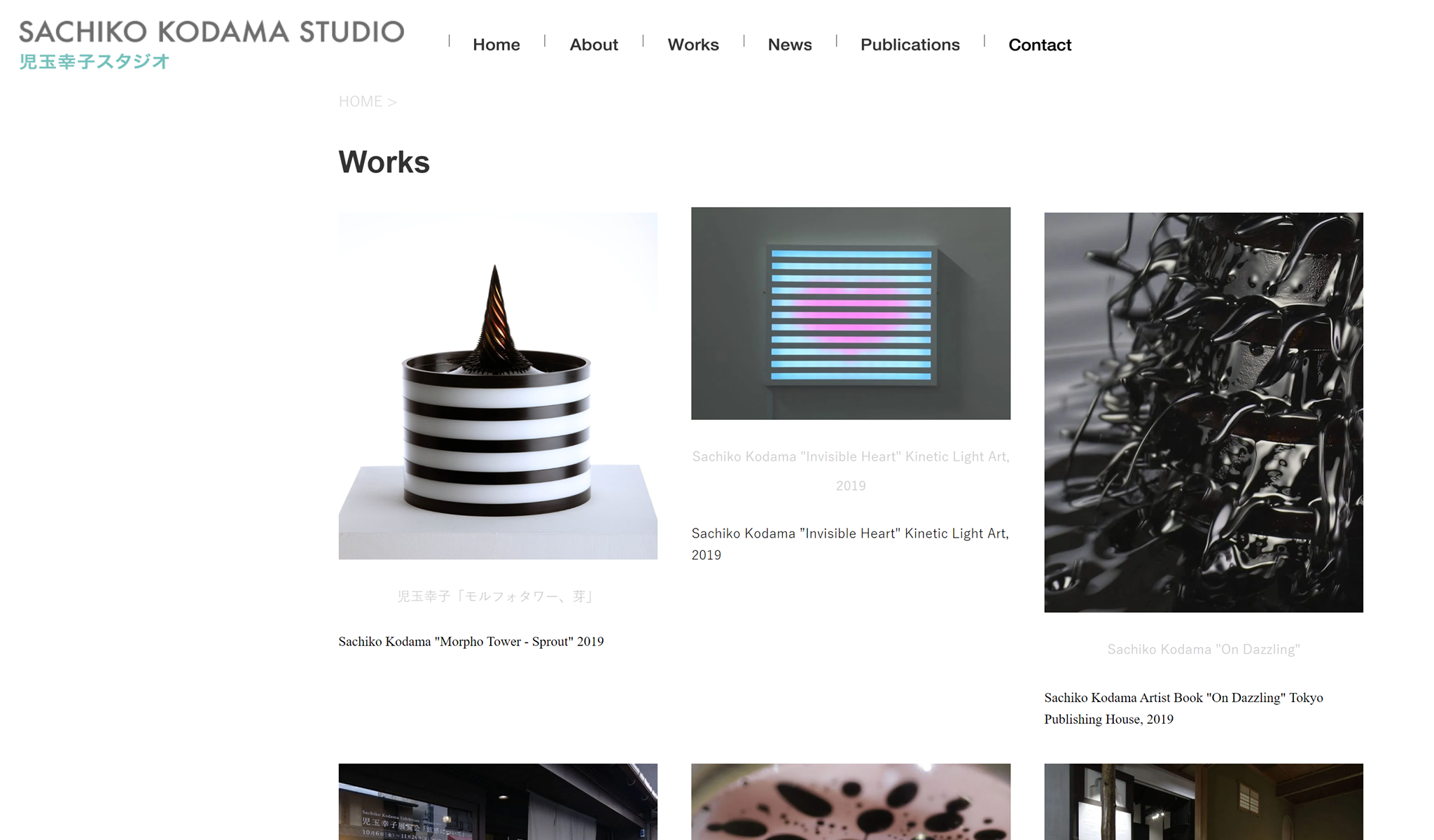 Inspired by this kind of harmony generated by the juxtaposition of structure and chaos by the use of ferrofluid and kinetic sculpture, we wished to demonstrate it with ferrofluid in our practice for this project too. We purchased a bag of iron(III) oxide and started playing with it by mixing it with different different types of solvents including motor oil and washing up liquid while doing more research how it’s been incorporated to other artists’ works of art.

One use of iron(III) oxide that drew our attention was to first mix it with oil and then encase the oily mixture in a container filled with water. For example, the project Ferrolic by Zelf Koelman utilizes the unmixable nature of oil and water and creates a versatile movement of ferrofluid within water with the use of magnets behind the display, and creates different patterns with different modes of operation.

We wanted the magnetic material to generate different patterns when visitors interact with it. The mechanism behind the project SnOil inspired us to make an array of electro magnets behind the magnetic material, and different patterns will be programmed to be generated through the activations of electro magnets on certain positions during visitors’ interactions.

However, having talked to Kate and Nick during the proposal meeting, they shared their concerns about whether we would be able to manage an array of more than 10 electro magnets within 2 weeks’ of production period, as well as the cleanliness of the piece on display since ferrofluid tends to get messy. Having reevaluated these essential suggestions, we decided to abort the idea of making ferrofluid and only use iron(III) oxide powder as it generates a fur-like texture when magnetized and still creates a very aesthetically intriguing look. For example, the following project uses furry pom poms as part of the interaction piece to produce a very engaging experience.

We were also inspired by the mechanism behind this pom pom piece as it uses servos and turns a circular movement into a linear movement which we later used in our project to simply the movements of magnets.

This project has undergone a series of experimentations, evaluations and adaptations. Having decided to explore creative material for this project, we chose to use magnets to experiment with. We first started making electro-magnets by wrapping conductive metal wires around a coil, and hoped to create patterns with magnetic material through the activation of an array of electro-magnets. The patterns will change and react to the on and off of the eletro-magnets.

However, the magnetism of the electro-magnet is not strong enough and generates a lot of heat after a longer period of time when it’s activated. We worry that they would cause safety issues during the open show because of overheating and also the visual effect might not be desirable because of its weak magnetism. Eventually, we decided to use actual magnets instead. This change has led us to re-think the reactions of the magnets as they will not have the ability to be turned on and off, and will always have magnetism.

Therefore, we decided instead of making magnets become activated and deactivated, we could change their position through movement actuated by servos motors through a slider.

It turns out the micro servo motors we have are too weak. One slider weighs around 6kg and the servo we have is only able to move weights up to 1.5 kg. We try to come up with different solutions to solve it. First, we changed the micro servo to a more powerful servo FS5106R which takes up to 6kg in weight. Second, we put the slider vertically instead of horizontally and use gravity to our advantage, and attach the slider to the servo through a piece of fishing wire.

However, it seems the slider is too heavy still, especially now that all the weight is put on the servo motor. The fishing wire also becomes less durable after the serco runs for a longer period of time. Finally we landed on the idea of laying the slider horizontally and using gears to achive the linear movement of magnets through the rotation of servos.

Having done that, the mechanism still seems inadequate because the full rotation servo doesn’t seem to have enough torque to move the gear plus the slider. We again had to change to an even more powerful motor, which led us to using stepper motors. We also favor the stepper motors over servos since they are simpler to code as it counts steps instead of time.

Now that all the underlying mechanism is working. It’s time for us to put it all together. The production process begins. We have prototyped what the piece would look like in a digital 3D software and made sure that it would all come together in reality. 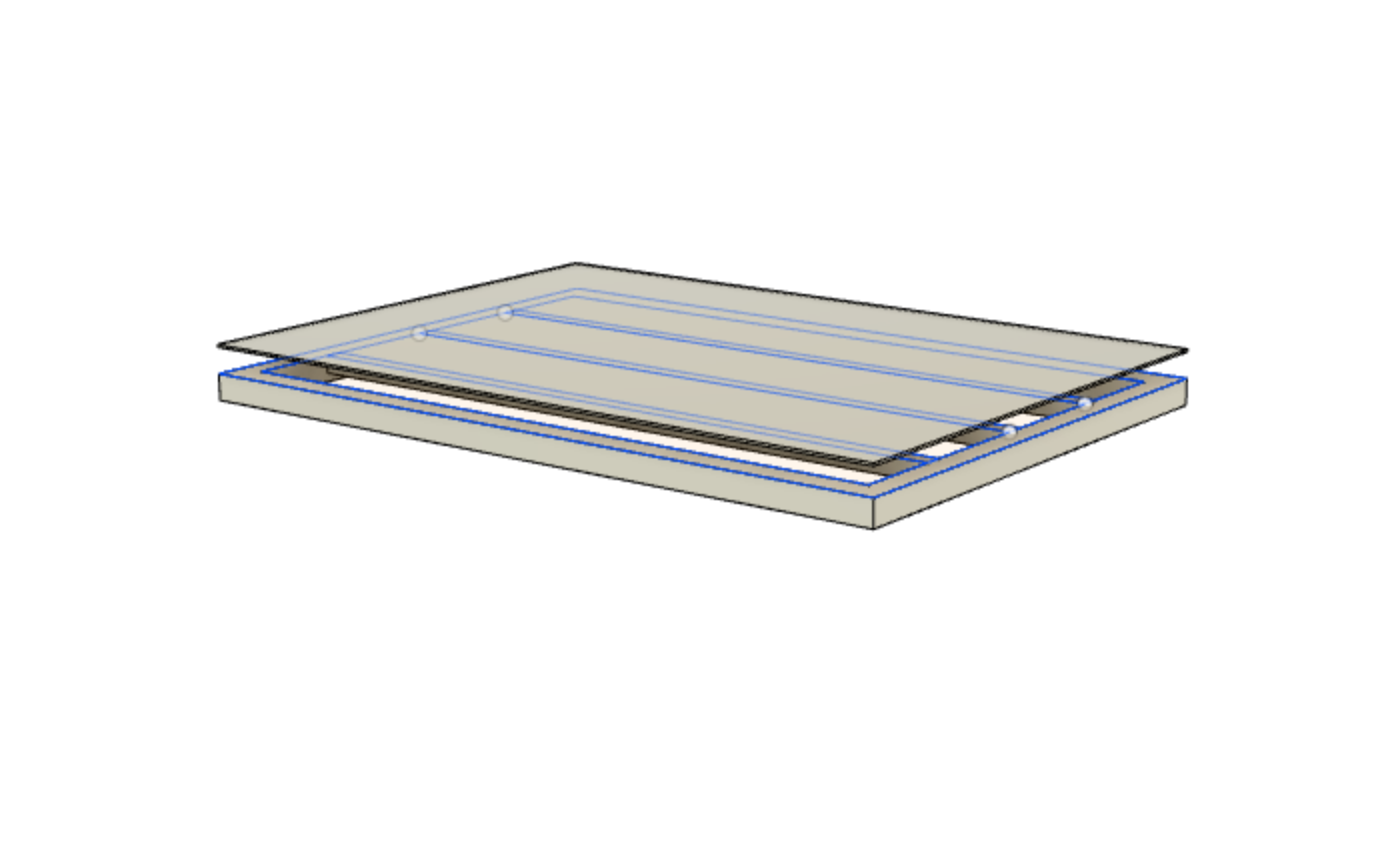 We started building the box with the help and guidance of a professional constructor friend. 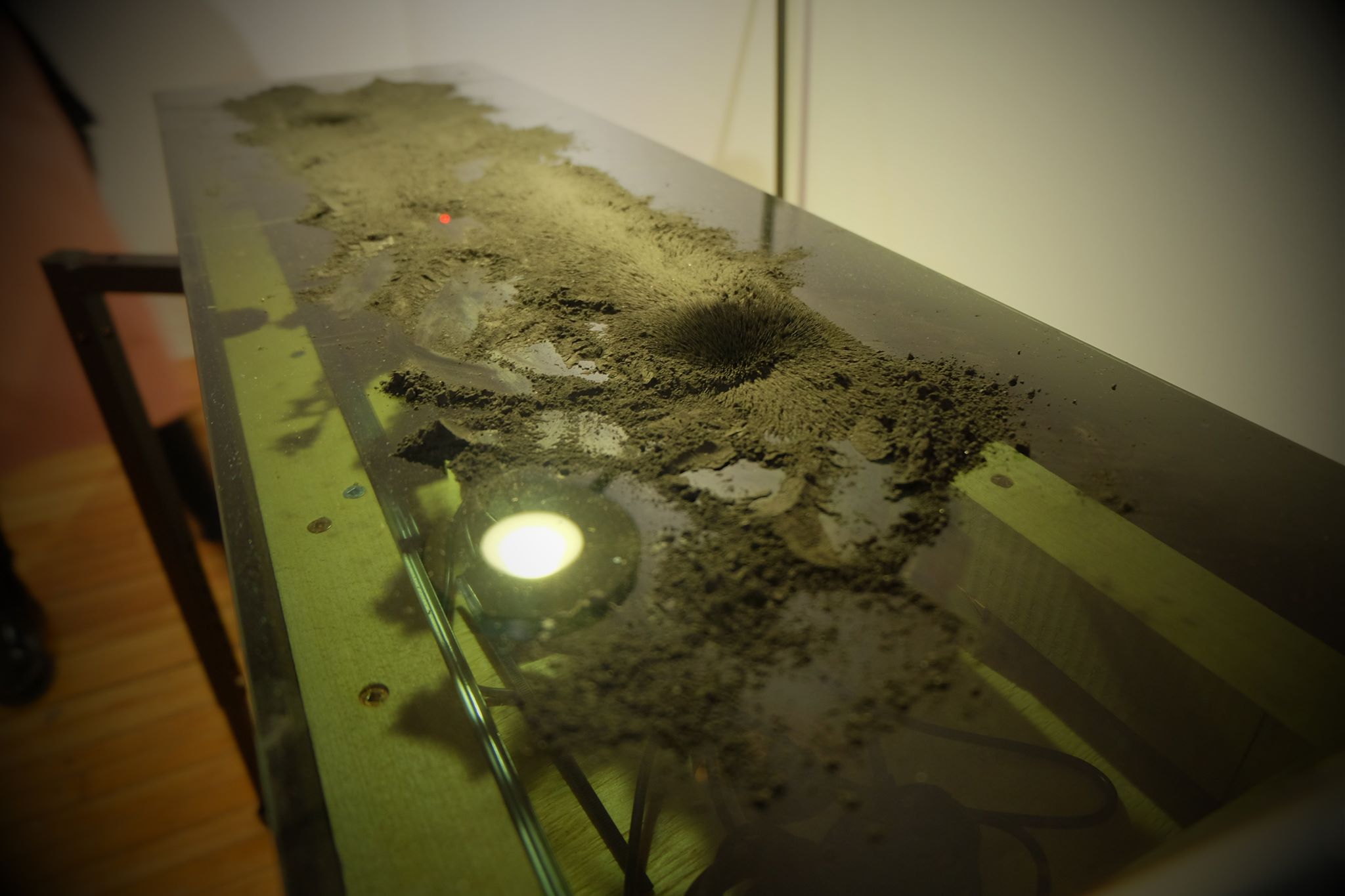 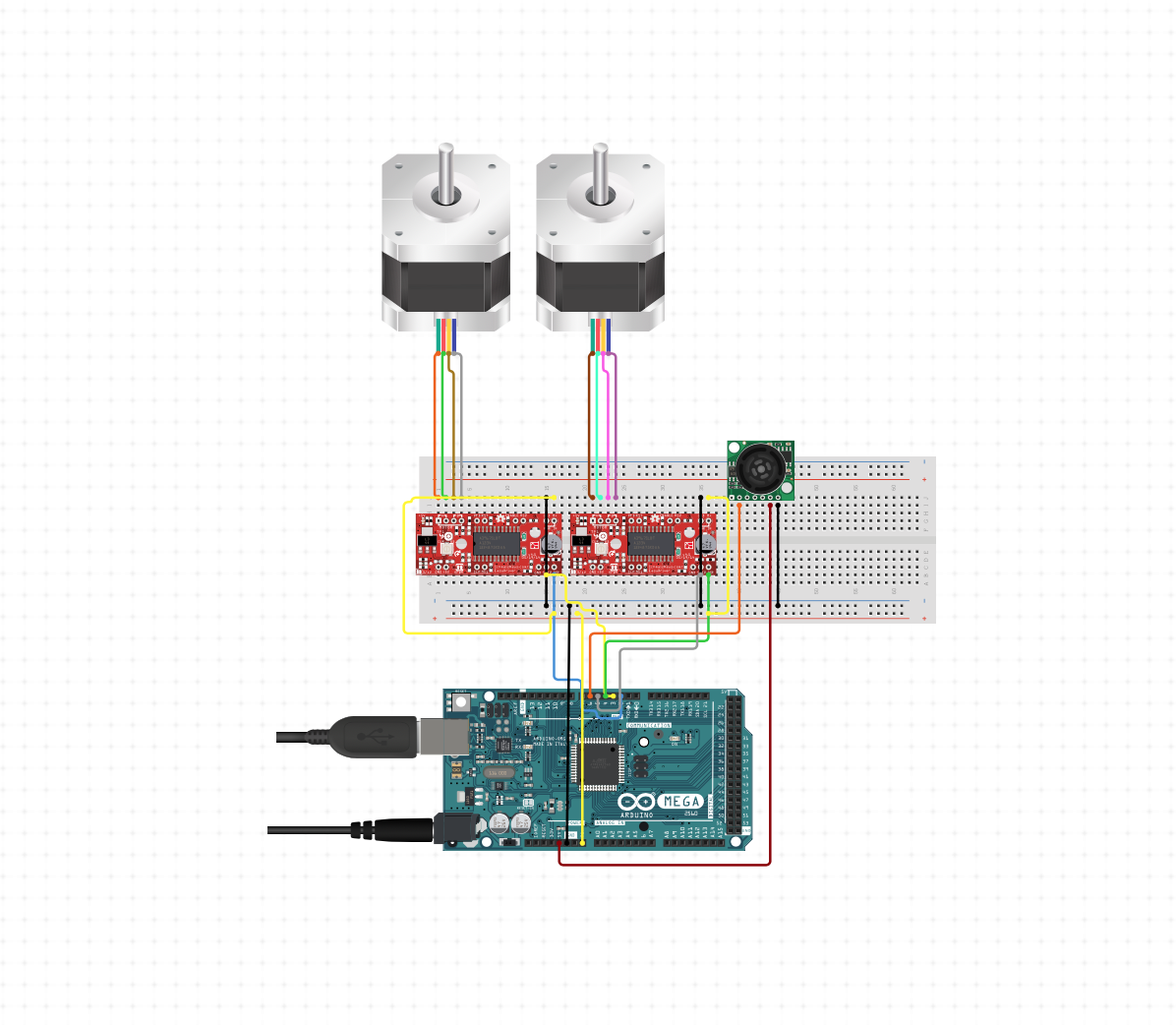 During the exhibition, the piece successfully achieved creating a sense of mystery and made many visitors to the open show wonder what it was and how we did it. During the critique session, we were suggested by Nick to get gloves to put besides the piece so people would know that they could touch it and maximize the level of interaction. However, having discussed it within our group, we agreed the gloves might temper with the eeriness the piece gave off and wouldn’t fit with the underlying tone. The gloves would also create a barrier for people to feel the texture of the powder, which is an essential part of this interaction experience – to find out what this alien material is through all means of explorations.

To solve this issue, we decided to keep paper towels with us. After people touched it, we would hand off paper towels to them to wipe the powder off. However, if they didn’t ask us, we wouldn’t say anything about touching. As was expected, many people were tempted to touch the magnetic power on display and we allowed them to do it if they had asked. What’s interesting is that the seemingly dirty powder didn’t hinder people’s curiosity and a lot of people dig their hands into the powder, which seems to be a validation of success in mission of the mystery this piece tries to achieve. This project has taken us a lot of time in all stages of the process. However, it was truly rewarding to see it come together in the end after many trials and errors. 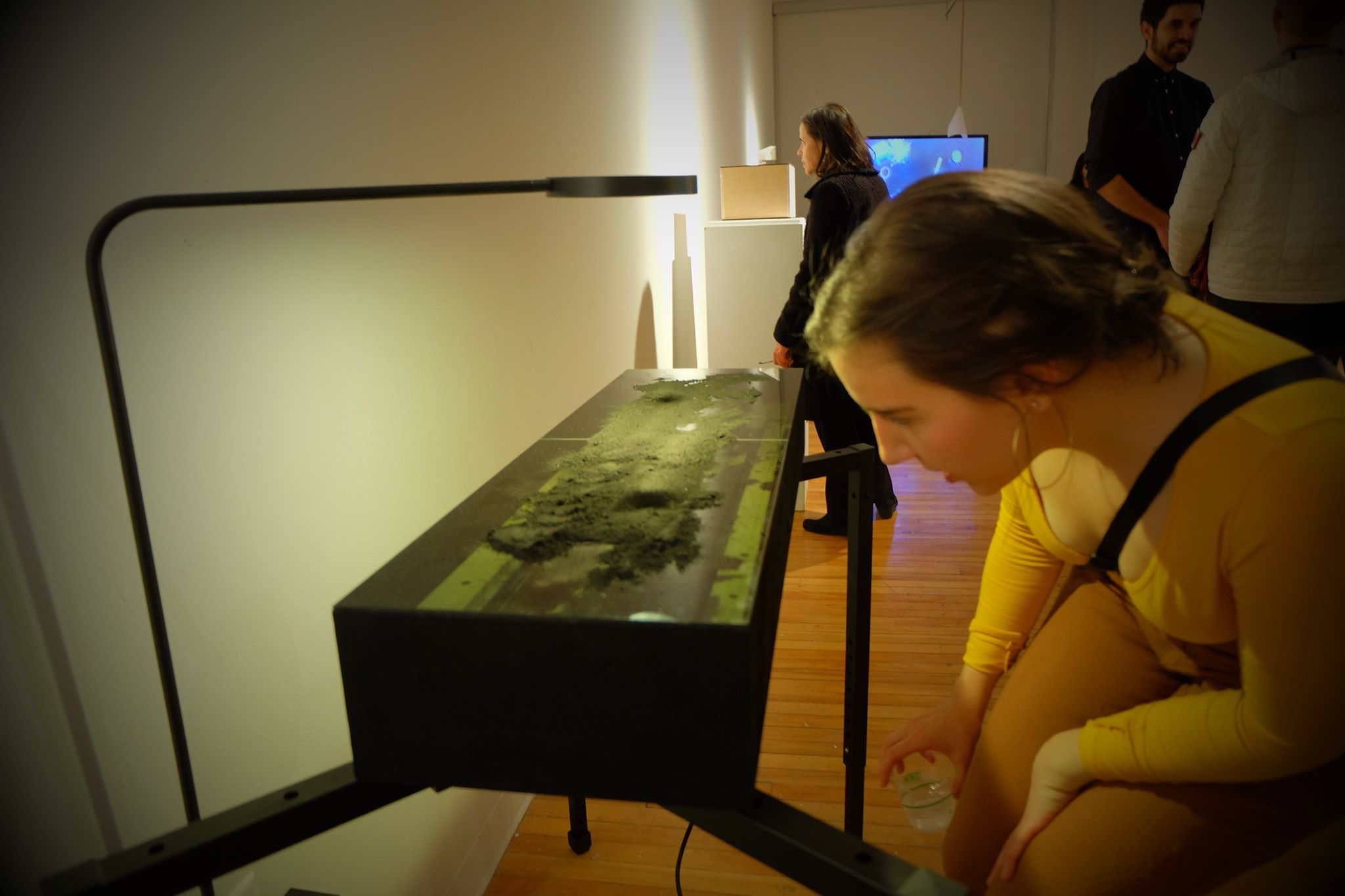 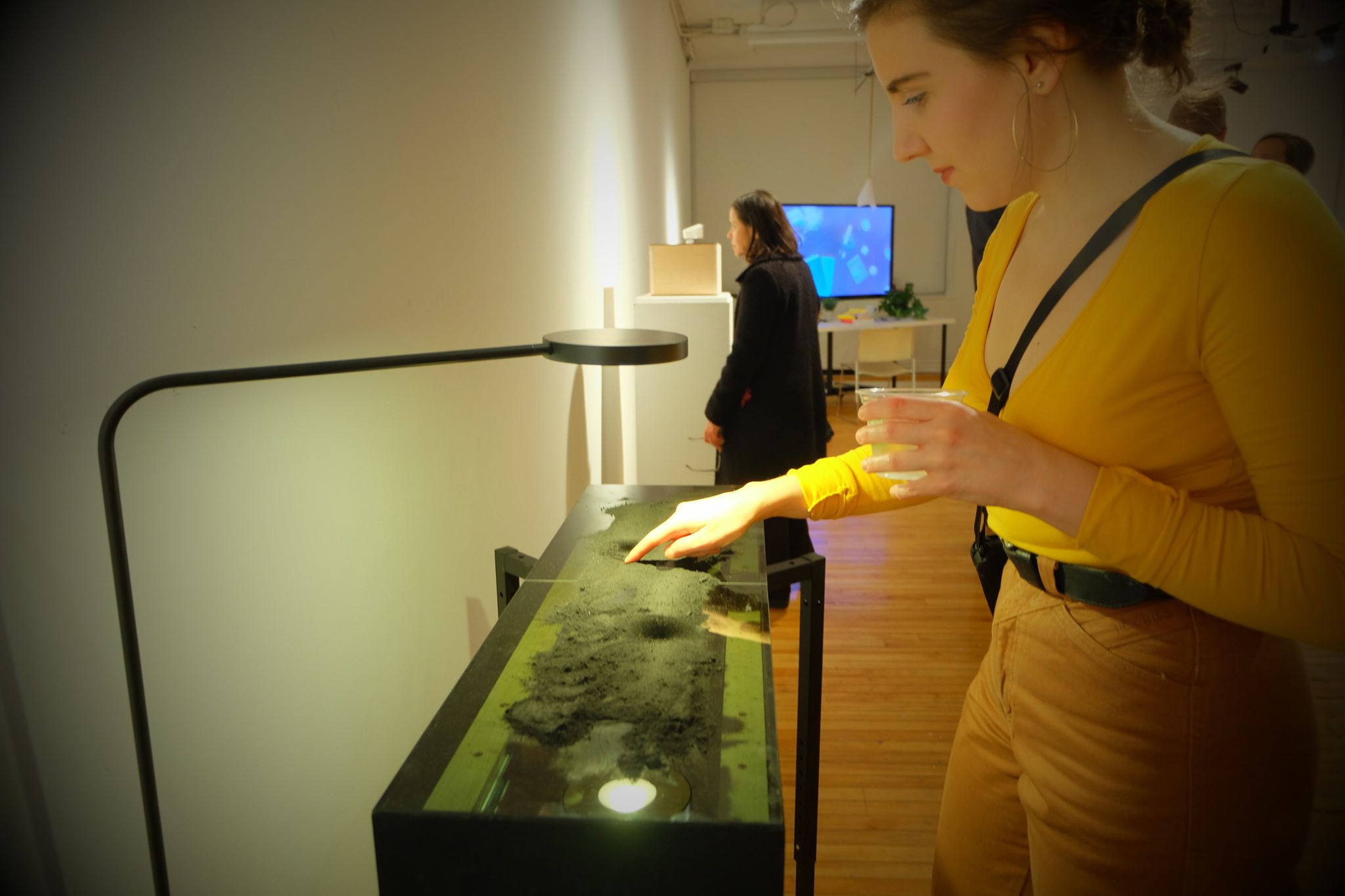 Brownlee, J. (2018, July 10). MIT Invents A Shapeshifting Display You Can Reach Through And Touch. Retrieved December 9, 2019, from https://www.fastcompany.com/3021522/mit-invents-a-shapeshifting-display-you-can-reach-through-and-touch.