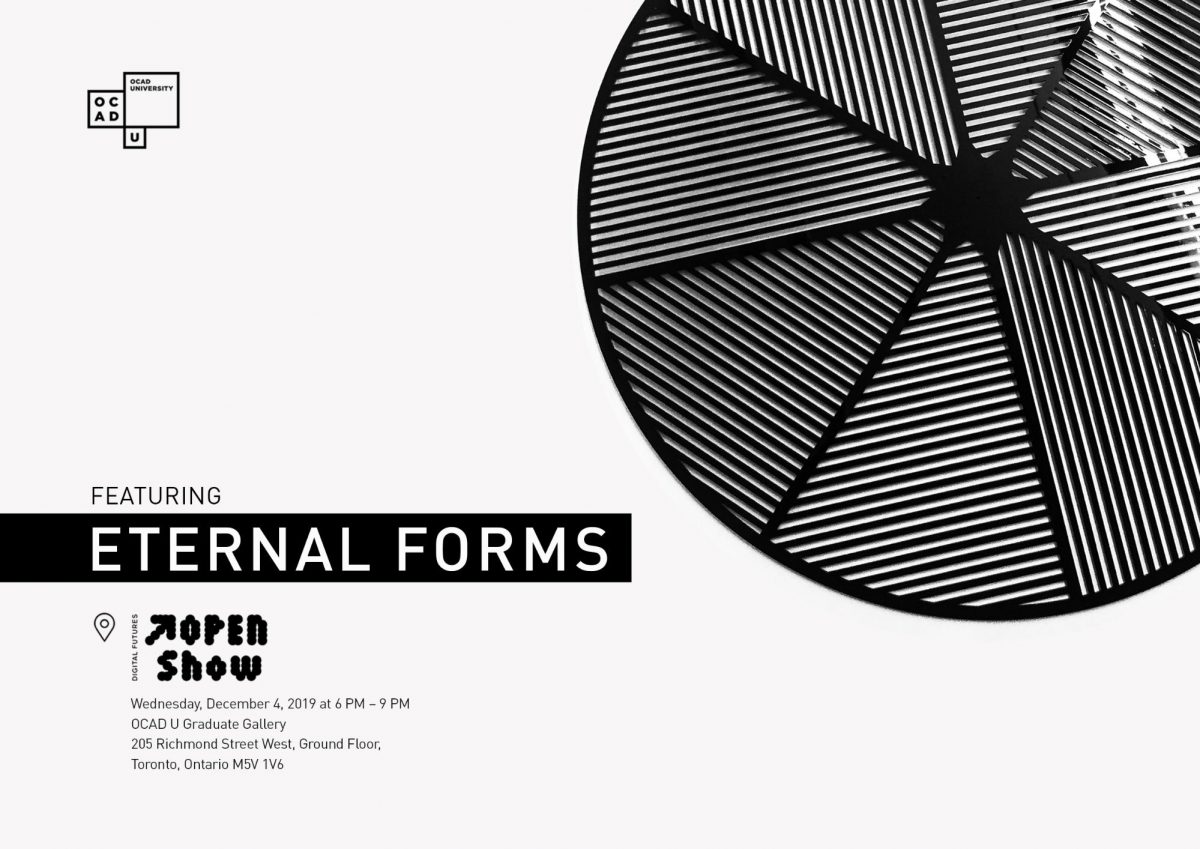 Names of the Group Members:

“Eternal Forms” is an interactive artwork incorporating geometric elements in motion. The construction of the elements is highly precise in order to generate an optical illusion of constant collision. The illusion is a result of linear patterns overlapping in motion between geometric forms. The foreground square will be firmly stabilised while the background circle will be in rotating constantly. While display lights change their chromatic values when participants interact from ranging proximities.

The artwork takes inspiration from various light and form installation projects by Nonotak, an artist duo consisting of Illustrator Noemi Schipfer and architect-musician Takami Nakamoto. Nonotak works with sound, light and patterns achieved with repeating geometric forms. The installation work aims to immerse the viewer by enveloping them in the space with dreamlike kinetic visuals. The duo is also known for embedding custom-built technology in their installations, as well as conventional technology to achieve desired effects in unconventional ways.

Originally we had the intention to continue our explorations with RGB displays. Four out of five of the group members had come a long way while working together on Experiment 4 (Eggsistential Workspace), only to have our communicating displays malfunction on account of the unexpected fragility the pressure sensors. We had hoped to pick up where we had left off, by disassembling our previous RGB displays and revamping the project into an elaborate interactive installation for the Open Show. We designed a four-panel display, each one showcasing a pattern of birds from our respective countries (Canada, India and China). The birds would be laser-cut and lit by effect patterns with the RGBs. After many hours of strategizing, we found we were facing too many challenges in the RGB code that, given our time constraints, became overly risky. For example, we intended to isolate specific lights within the RGB strips, thereby designating the neighbouring lights on the string to be turned off. Once we broke down how complex doing this would prove to be (each message sent to an LED would involve sending messages to all preceding LEDs in the string), it became clear that the desired codebase was out of scope. We returned to the drawing board and began restrategizing a plan that could work within the restraints of our busy schedules, deadlines and combined skills. Having five people in the group meant a lot of conflicting ideas, making it tricky to move out of the brainstorming process and into prototype iteration. But we were all interested in kinetic sculptures and the more examples we came across, the more potential we saw in devising one of our own. It seemed like an effective way of keeping us equally involved in the strategy as well as the code. Having minimal experience working with gears (only Jun Li had used them previously) we were intrigued by the challenge of constructing them. We came across this example and began to deconstruct it, replacing the hand-spun propulsion with a motor and controlling the speed and direction by means of proximity sensors.
(show video) : https://www.youtube.com/watch?v=–O9eyKIubY

Though we aimed to keep the design as simple as possible, we weren’t able to gauge the complexities of the assembly until we had really started to dig into the design. We thought a pulley system could be built, where a mechanism surrounding the motor could trigger motion in another part of the structure by way of gears. We were mesmerized by the rhythmic patterns we came across, in particular, the work of Nonotok studio. They primarily work with light and sound installations. Taking inspiration from their pieces and work, we decided to create visual illusions based on the concept of pattern overlap. We also planned to make use of light and distance sensor to make the piece an interactive light display.

Our previous ideas seemed complicated in terms of implementation. Hence, we sat for a second round of brainstorming on the several outcomes with the given time frame and resources. We commenced on browsing on existing projects of ‘Kinetic Installations of NONOTAk Studio, ‘The Twister Star Huge ‘by Lyman Whitaker, ‘Namibia’ by Uli Aschenborn and Spunwheel Award-winning sculptures made from circular grids. We proceeded with the creation of our circular grid. We designed a circular grid system, which is constructed by several interlinking ellipses running across a common circumference of the centre ellipse. This grid served the base our proceeding designs.

We derive inspiration from Félix González-Torres, American visual artist from Cuba who created minimal installations from common objects like lightbulb strings, clocks, paper, photographs, printed texts or hard candies. Being a member of ‘Group material’, a New-York based artist organisation formed to promote collaboration projects with regard to cultural activism and community education.

Several constructions and geometrical formations were explored. We studied how to create an optical illusion with forms in motion. We tried to simplify the curvatures into straight lines since we had no idea on the feasibility and reliability of complicated junctions. Thus one simple circle and one simple square were included.

As you can see in the above diagrams, a layout was created to give us an idea of the entire frame, its size, materials to be used as well the complications or hindrances that may befall upon our way.

After the finalization of the entire setup, we can up with a list of different layers that would be encased in an open wooden box (20’by20’). The list is as follows from top to bottom:

Image: The 2 layers of forms that were laser cut to include in our final setup.

Image: The RGB bulbs set up to create an even distribution of light across the 20”x 20” board.

Image: After the setup was done, above are a couple of effects created using lights an motion of the overlapping layers.

We created numerous samples of our design in miniatures and overlapped them. We experimented with black and white colours by playing with the following arrangements-

Motor — the motor is set to run slowly counterclockwise at the optimum speed to give the interplay of with the geometry. It’s important to get the speed exactly right or the lines will not show the desired effect.

Lights — the distance sensor reads in the value and includes it the running average of the distance (last 10 readings), it then maps that distance to a value that will be used for the brightness of the lights, and the speed of the effects. The closer the brighter, but slower the effects. The distance is also used to determine what light effect is shown. When very close, it breathes, a little further away, it blinks quickly, and at the standard distance it paints the colour to the background. Each effect adds to the effect of the illusion.

For the exhibition, we were given an entire room to display the piece. We projected a video of the manufacturing, on to one wall, and on the opposite wall, we solved the concern of the empty space by projecting artwork that was appropriate for the display : a generative mandala formation of various altering forms (coded by Sananda in her individual project). The work allows participants to create their patterns with varying colours using manual alterations by potentiometers. We also had some calming tunes that played along with the laser cutting video which was being projected.

Many in attendance commented that they couldn’t pull their eyes away from the piece, and that it was meditative, mesmerising and calming. We also received three offers for the purchase of the installation. One participant analysed the piece praising the use of colour, lines, geometry and interaction that made it very aesthetically pleasing, and we noticed many leaving and returning with their friends to have them experience the illusion themselves, and to interact with the distance with great delight. Overall the experience of light and subtle motion in a dark room created some beautiful visual illusions and that became the limelight of our experiment.