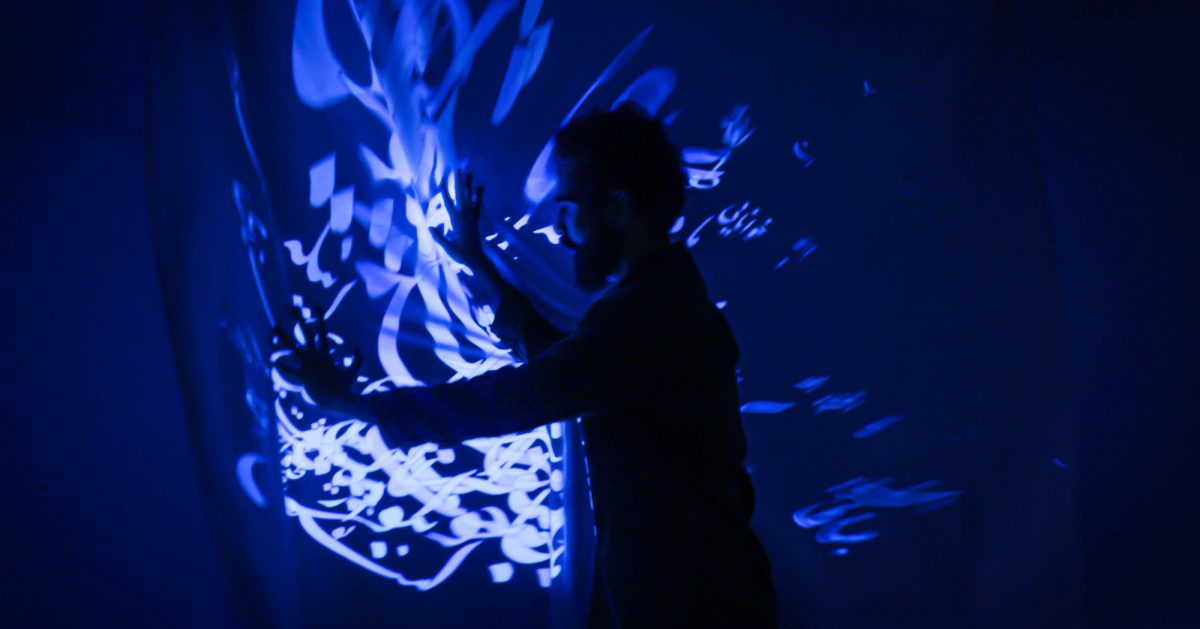 Invisible ‘Kelk’* is an interactive installation inspired by the transformation of Persian script, from calligraphy to digital typefaces that almost all the current publications are based on. This project is a visual extension of my previous project, an exploration to design an interface to interact with Persian calligraphy.

*’Kelk’ is the Persian word for calligraphy reed.

From Calligraphy to Typography

Reza Abedini is one of the most famous Iranian graphic designers, whose main source of inspiration is visual arts and Persian calligraphy. What is original about his work is that he was the first to recognize the creative potential of Persian calligraphy and to transform it into contemporary graphic typography.[1][4] In an interview, Abedini says: “After many years, because we have repeatedly seen and got used to typography in newspapers, it has become the reference of readability, and not calligraphy anymore. And now, everything written in that form is considered readable, which is one hundred percent wrong in my opinion.”[2]

Abedini argues that we have lost the potentials of Persian calligraphy as a result of adapting to a technology that was not created for Persian script – movable type.[3] ‌Below, you can see Abedini’s original words written in calligraphy (Nastaliq, the prominent style in Persian calligraphy) and typography using one of the most common typefaces currently used in books and newspapers: 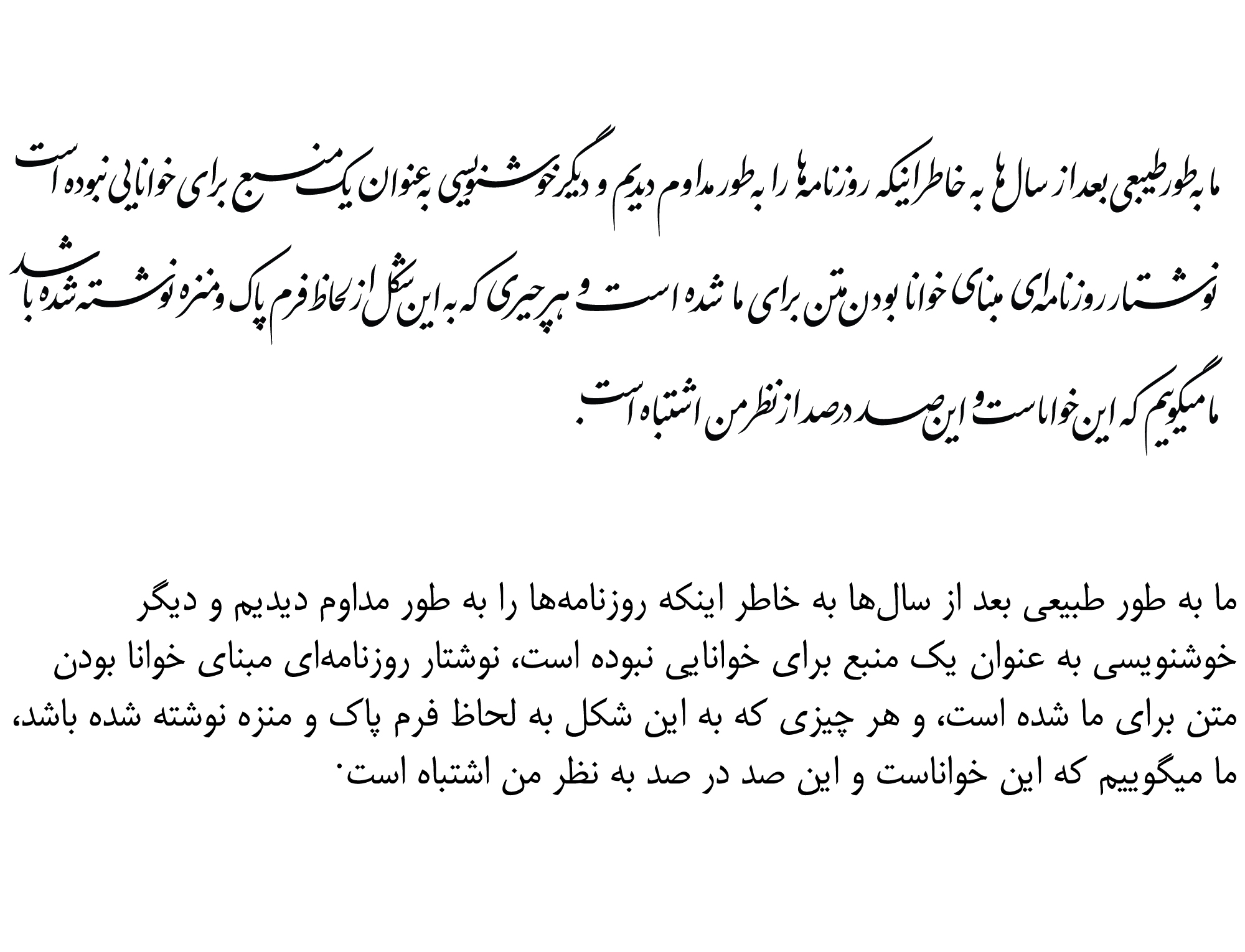 Despite the obvious visual difference between these two, the important fact is that both of these writings are completely readable for an Iranian person.

Similar to my previous project, there are two different things happening when pushing or pulling the hanging piece of fabric – the canvas – from its state of balance. All the words from the short paragraph of what Abedini says about calligraphy and typography are scattered on the canvas in a random pattern that refreshes every minute. You see the same words on both sides, in calligraphy and typography.

The composition of calligraphic words is inspired by an important style in Nata’liq script, called Siah-Mashgh. This style is usually defined by its tilted written words in multiple baselines all over the canvas.

What I found really interesting is the fact that although words are randomly positioned in my project, and the random pattern is constantly changing every minute, the result retains its visual identity in terms of the calligraphic style. The words are in harmony in all different random positions, which in my opinion, is the result of great visual potentials of Persian calligraphy. 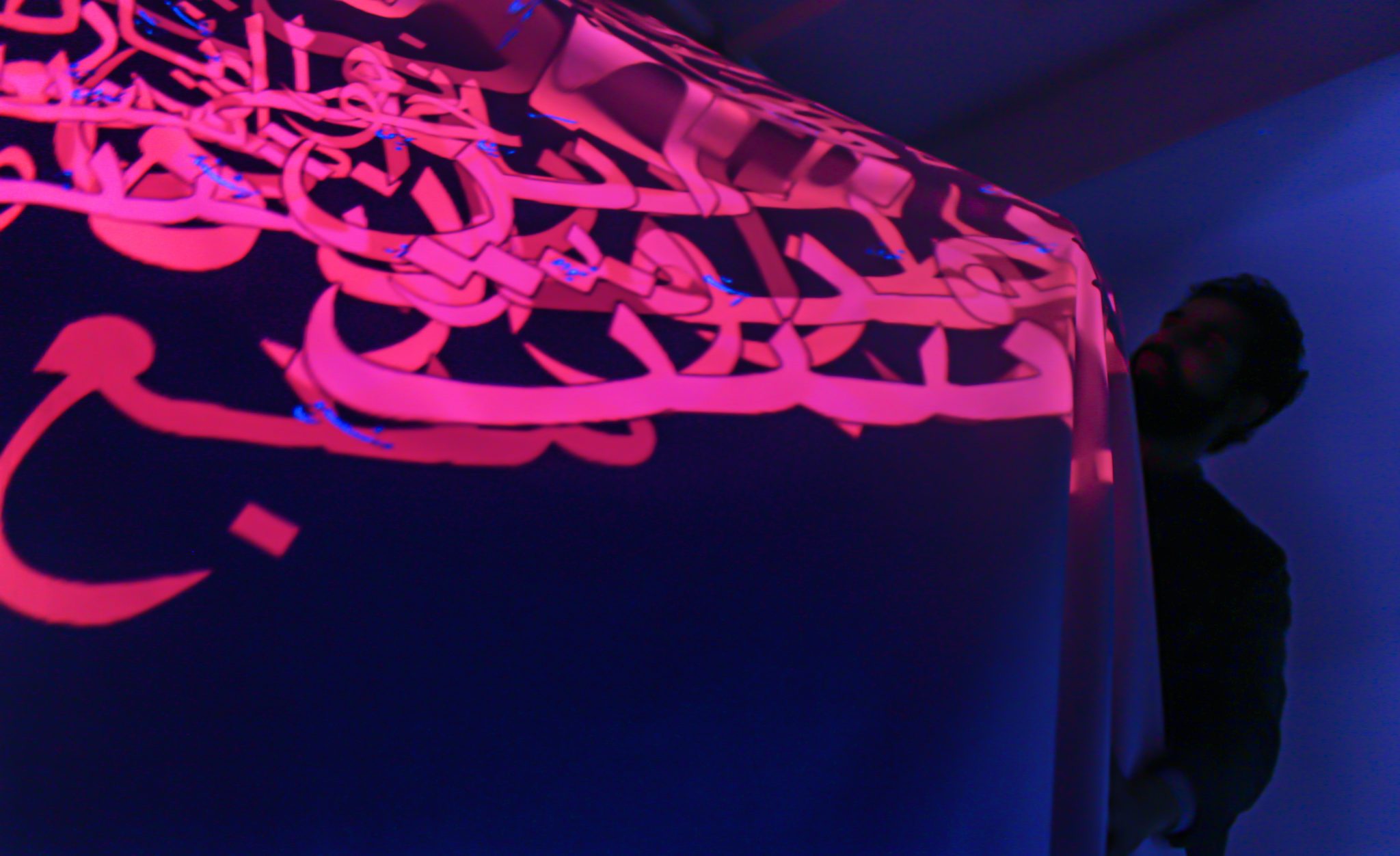 Almost all the technical details are the same as the previous project, except that I used a slightly larger fabric in the exhibition and a cleaner physical setup. A larger piece of hanging fabric essentially results in slower movements of the fabric in the resting position and during the interaction, which I found more suitable regarding the overall experience I expected.

From the observation of and discussions with the people interacting with the project, two major points were perceived. The first obvious fact was that when confronting the hanging fabric, many people hesitated to physically interact with it, and even after being told that it was OK to touch the fabric, they touched it in a very gentle manner, unless they were ensured that they were supposed to ‘push’ the fabric. It was also perceived that the possibility of pulling the fabric was much less than pushing the fabric. However, after getting comfortable with the interaction, they usually spent several minutes with the piece and found it pleasing.