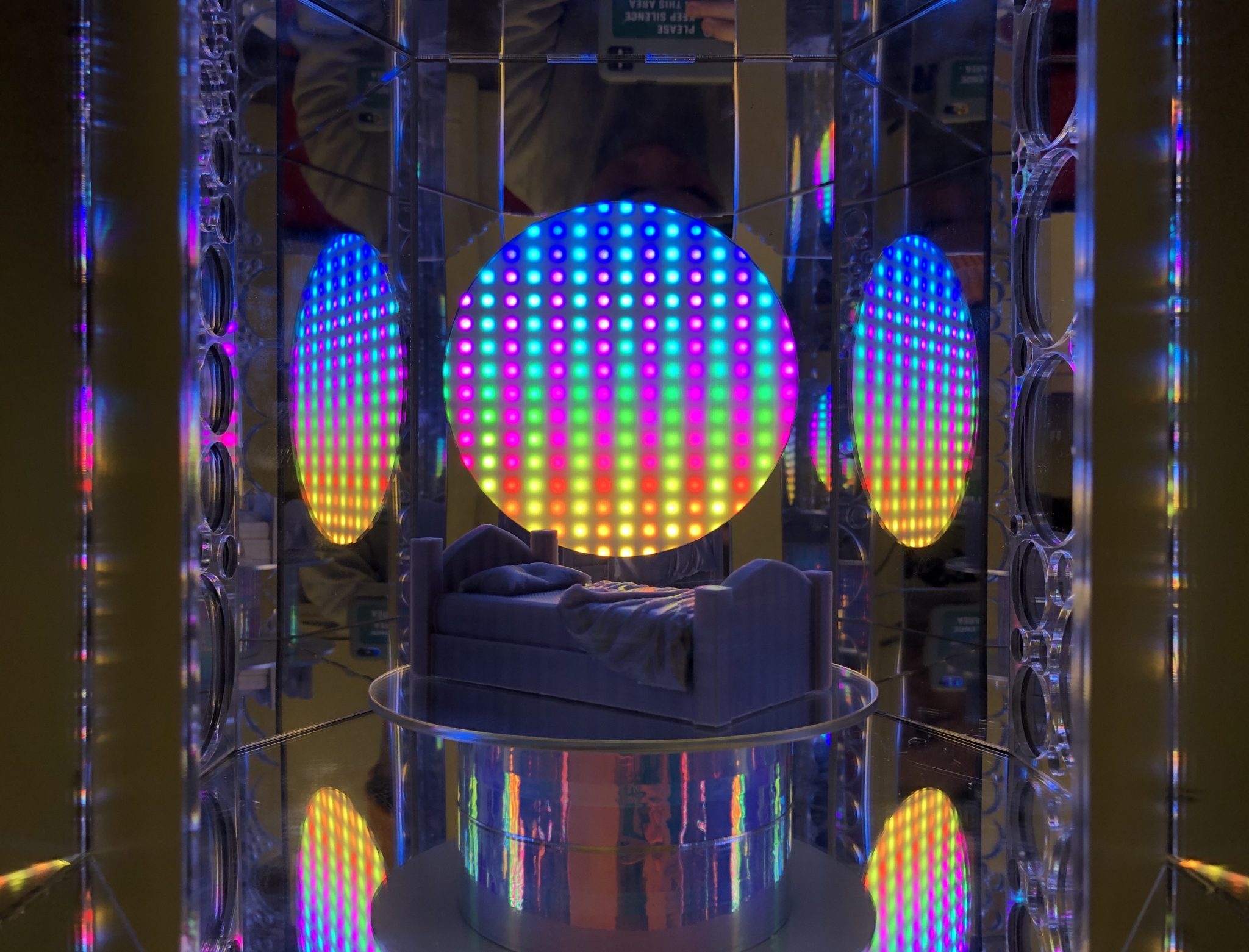 Project title: Leave a window open for me

Project description This piece is meant to create a space which expands infinitely within a box. It is a reflection of myself and my personal experience of fighting with insomnia and depression. It welcomes the audience to take a peek inside the story and share the feelings through the “window”. 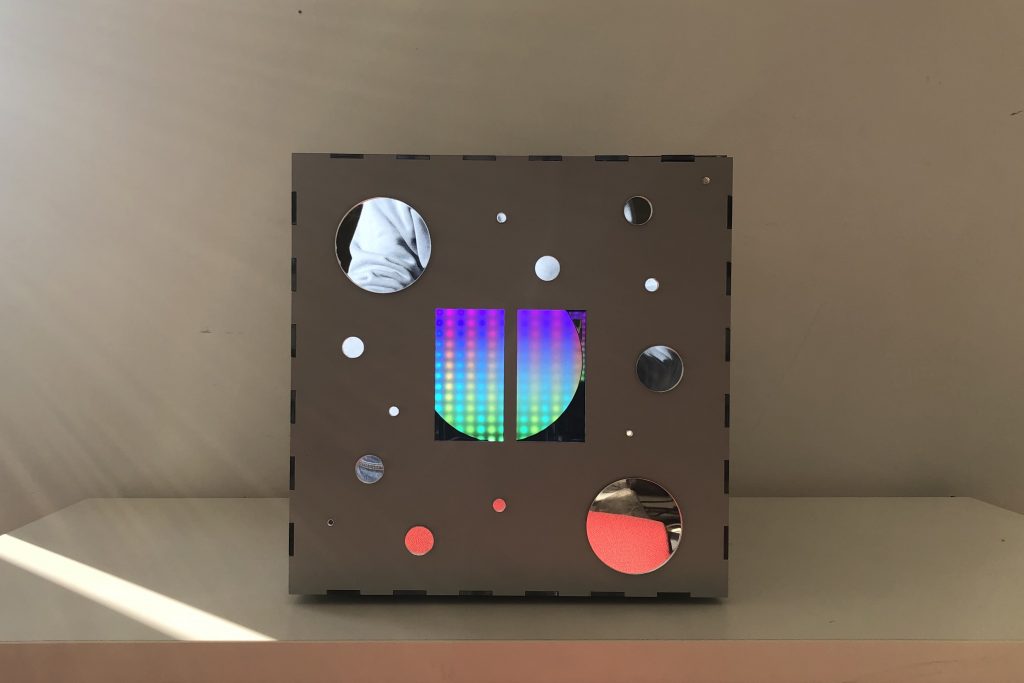 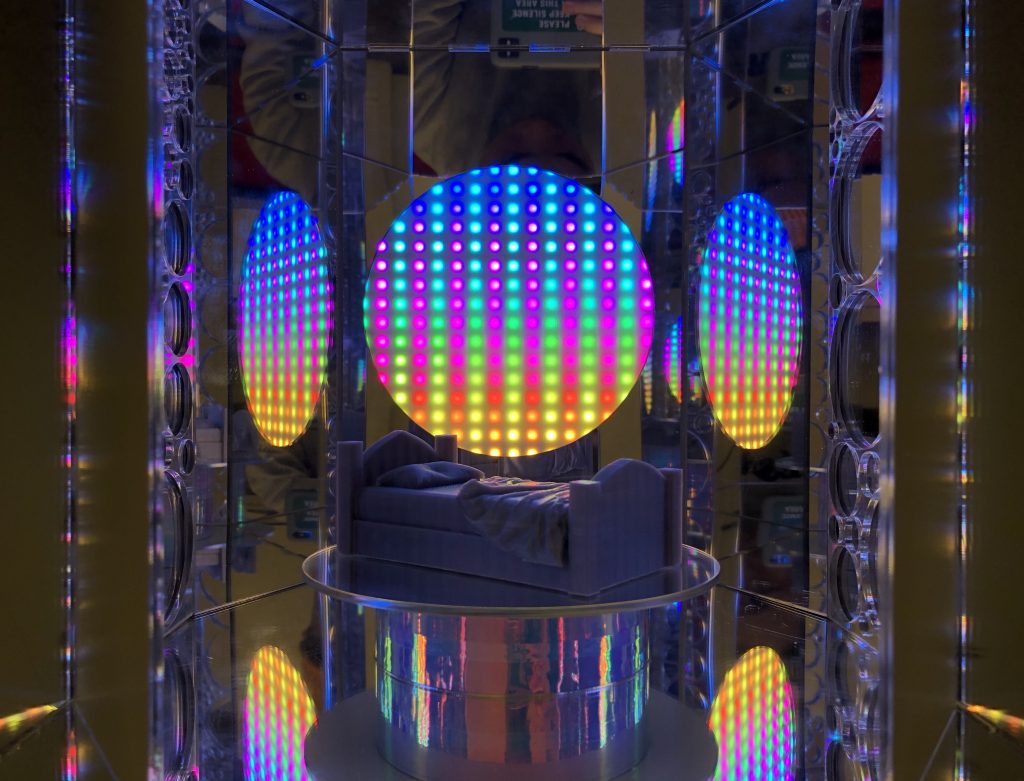 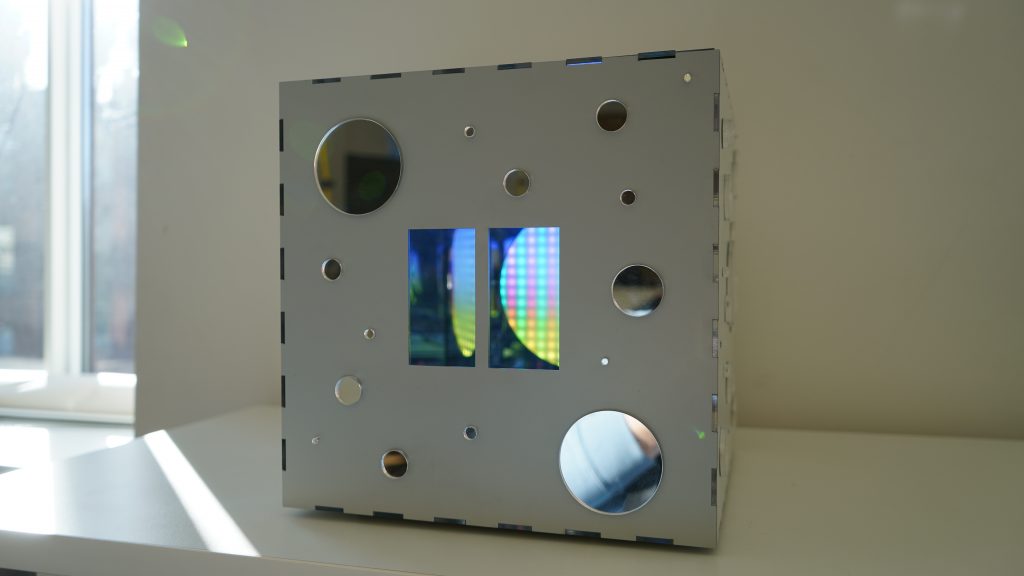 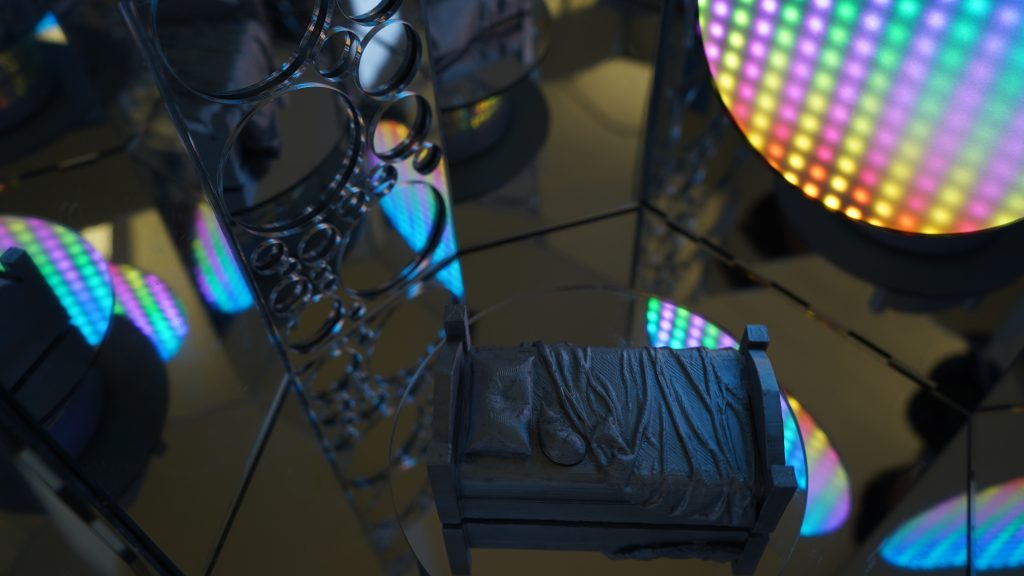 Please note that the servo input is supposed to go to pin 9 and the LED panel input should go to pin 12. There was no breadboard being used for my project, and I was using a 16×16 LED matrix panel.

I wanted to create this personal space within a box for the public because it is my story and I’m willing to share it with everyone. It is designed to be viewed through the “window” and one person per time so that the audience could have a more intimate and immersive experience.

This is a story about me going through insomnia and depression for several months when I was in New York. When I couldn’t sleep, the window was one of the things that I stared at the most, and I kept thinking about all the things that I shouldn’t have done and could have done. The stress was so real that it constantly haunted me in my head, the slightest light or noise became utterly unbearable. I could feel the bed spinning like a disc, or was it me spinning in my head? It didn’t matter day or night, they were the same, the thoughts kept me awake, the music that played was drowning me.

But I don’t want to drag the audience into a bad mood, it is not what my intention is, ever since I stepped out that situation, I’m proud of myself for doing that and I want to let people know that it is not undefeatable and you are not alone.

The initial idea of building an expanding space within a box was to see how the contrast between the outside and inside could be, the surprise element is always a twist that I want to collaborate in my design. I’ve been to multiple Yayoi Kusama’s exhibitions, and each time I’m amazed by how the glasses are forming these rooms. I was blessed to see Samara Golden’s work, The Meat Grinder’s Iron Clothes, at the Whitney Museum of American Art in New York. It was a multilevel installation built with mirrors to expand the space between where the audiences were standing. Looking up and down when standing there in between, the feeling was oddly satisfying, it made me lost in the thought of an existential crisis. 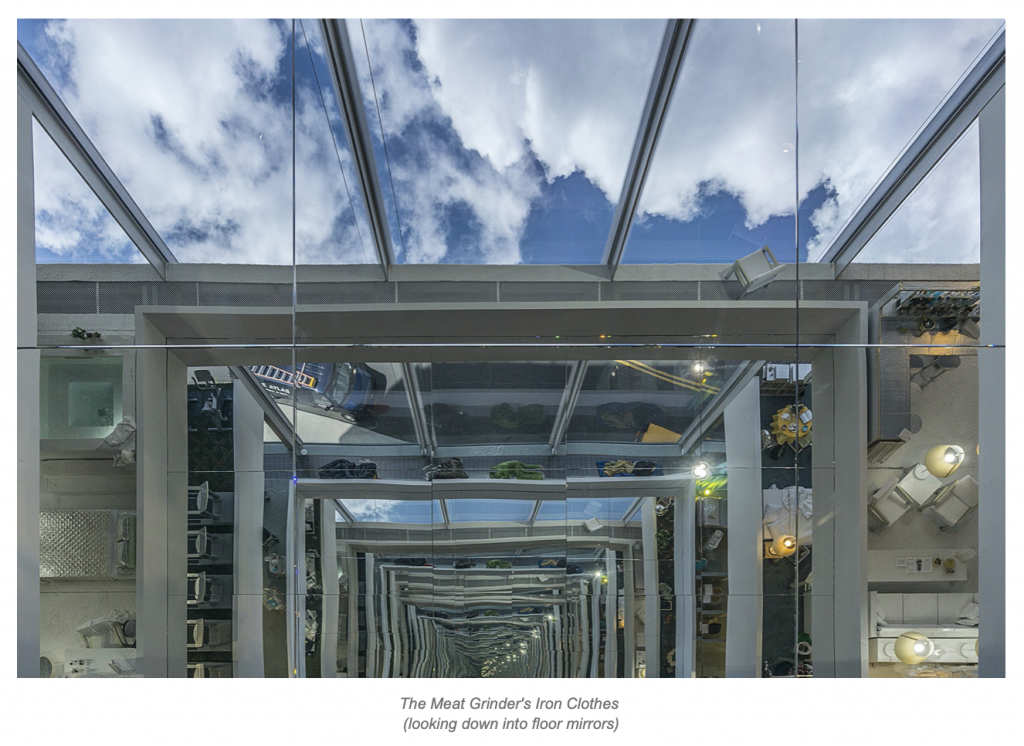 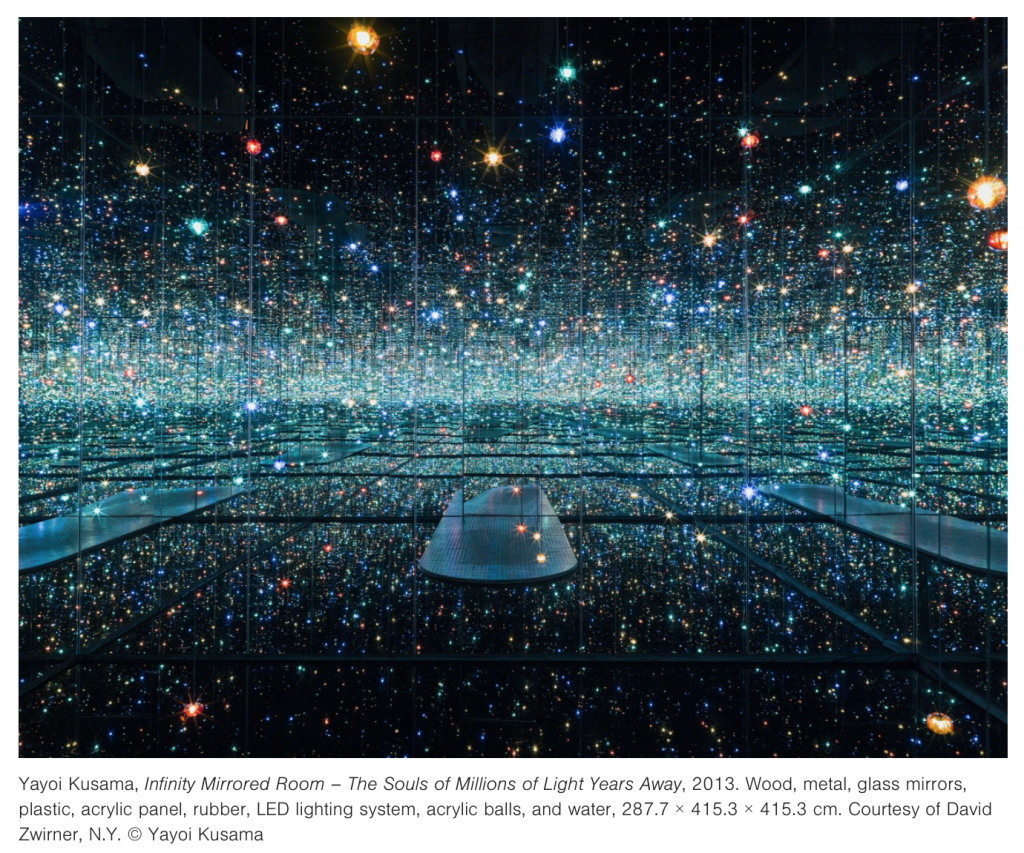 I was also inspired by Louise Bourgeois’ Untitled (Hologram Suite), 1998 – 2014. I like the way that she picked different items in different images to represent the different stories when creating this series of artworks. That helped me made my decision when I was debating whether to build a whole room full of furniture or go with one specific item. And I do agree that going with fewer items would express the feeling of loneliness more.

“The holographic image is created by laser beams that record the light field reflected from an object, burning it onto a plate of glass. The image is scaled at a one-to-one correspondence with the original sculptural material that was created by Bourgeois. These elements reoccur in many of Bourgeois installations and are related to her interest in physical and emotional isolation and sexuality.”

The servo that I used, at first, I went for the servo in our tool kit and followed a tutorial trying to make it go 360, but the result was not what I was expecting, because it simply turned into a motor without the function of taking input, and the speed was too fast. So I re-soldered everything back and the servo was able to download codes again but the spin was not ideal and made a lot of noise as well as shakes. So I borrowed a servo that could go 360 without being manually altered from Li’s team, which helped me survived this.

As for the choice of LED colors was aiming to create this harmony between itself and the spinning bed, both of them seemed to form a peaceful and harmless space, but it also emphasizes the fact that it’s a space of absolutely no sleep.

The open show was a blast, glad to see everyone’s work shine at their spots. It was interesting to receive feedback from the audience, especially when I ask them to take a look inside first without knowing the story behind it, most people described it as “beautiful and amazing”, which was great, because like I said, dragging people into a bad mood was never my intention, and people are free to feel whatever they feel. But after reading/hearing the background, they would be like, “yes, I can totally see that”. It made me wonder, did they actually see that because they’ve felt the same thing in the past? Or did they match the visual with the story? Either way, empathy was created and connected the audience with the piece, and I was more than happy about that.

Towards the end, there was a girl who came looked at my work and told me she knew exactly what I was going through because she went through the same thing before. We sat at the staircase and talked about the experience, and how good it felt talking about it, this made me realized the fact that there are more people than I expected who are facing a similar issue. And they should know that they are not alone, we are on the same boat here, and we will always be each other’s support.

I picked a location where fairly isolated and unnoticeable, which somehow went well with my concept, but not a lot of people went into the darker room where I was in along with the other three works. It would be nice if the audience knew about the room and paid us a visit:)