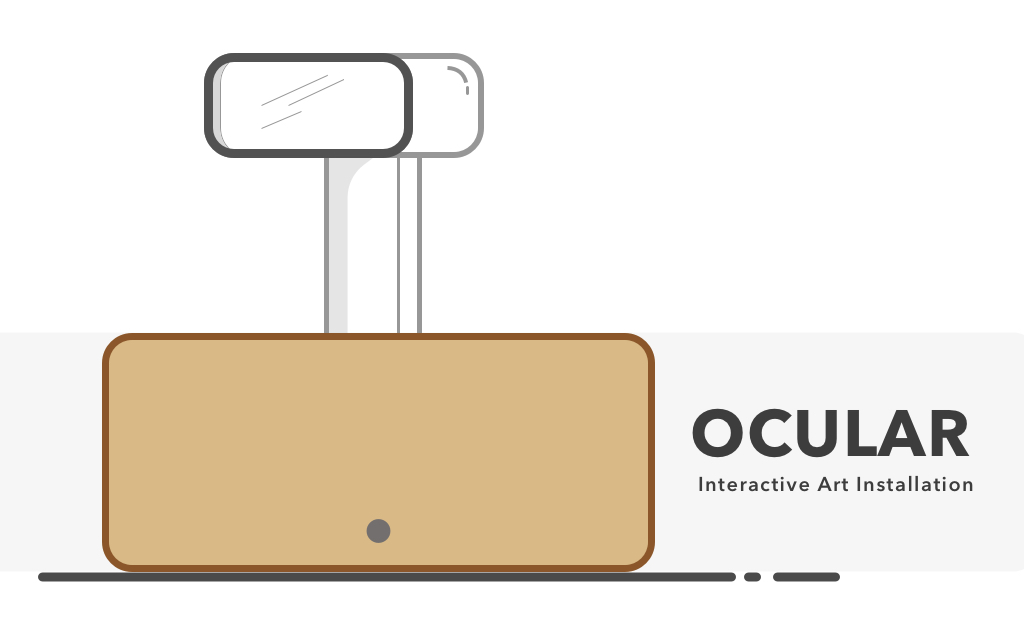 An animated robotics motion with a life-like spectrum bringing emotive behaviour into the physical dimension. An object with motion having living qualities such as sentiments, emotions, and awareness that reveals complex inner state, expressions and behavioural patterns.

He is excited to peak outside the box and explore around the surroundings but as soon as he sees a person nearby he panics and hides back in the box as if he is shy or feels unsafe. He doesn’t like attention but enjoys staring at others.

The explorations started with exploring objects and living organisms that can be used as a part of the installation. Where I can implement curious interactions and a moment of surprise and unpredictability. Gophers, Crabs, Snails, Robots were few to mentions. I finally ended up finalising periscope as an object that can have behaviour and emotions and a perfect object to play hide and seek with the visitors.

What is Periscope?
An apparatus consisting of a tube attached to a set of mirrors or prisms, by which an observer (typically in a submerged submarine or behind a high obstacle) can see things that are otherwise out of sight. I started thinking of ideas, object behaviors as well as setup of the installation to come up with engaging and playful interactions.

The model was developed in Rhino keeping in mind the moving parts that is rotating the head and the spin which is lifted from the bottom. 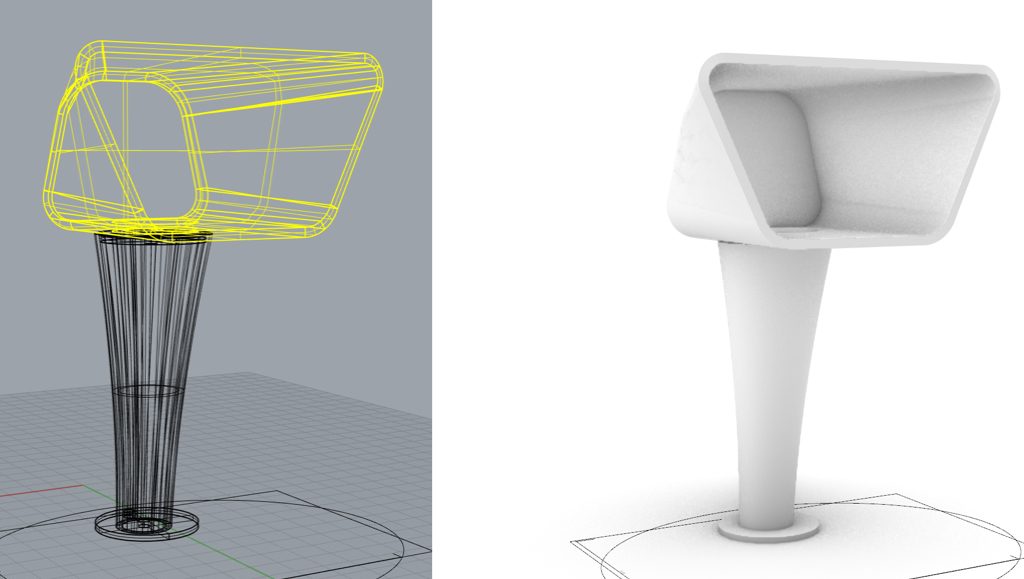 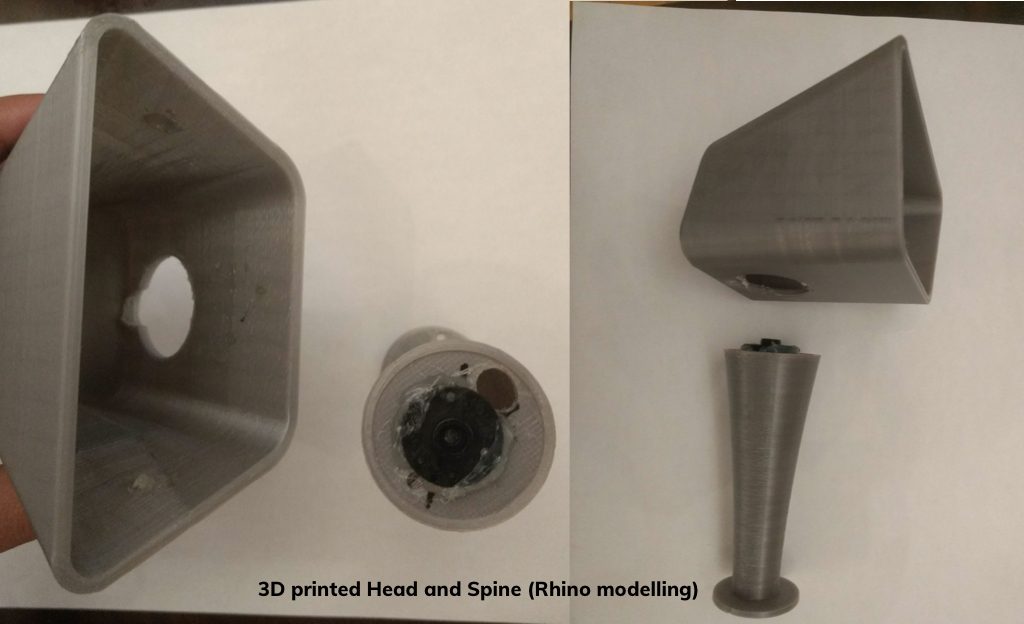 Testing the motors stepper (28BYJ-48 5V 4 Phase DC Gear Stepper Motor + ULN2003 Driver Board UNO MEGA R3-Head ) and Servo (SG90 Micro Servo Motor – Head and 3001 HB analog servo – Arm ). Stepper motors the RPM was too less to give that quality and reflex to the bot so decided to go with the servo motor which had better torque. 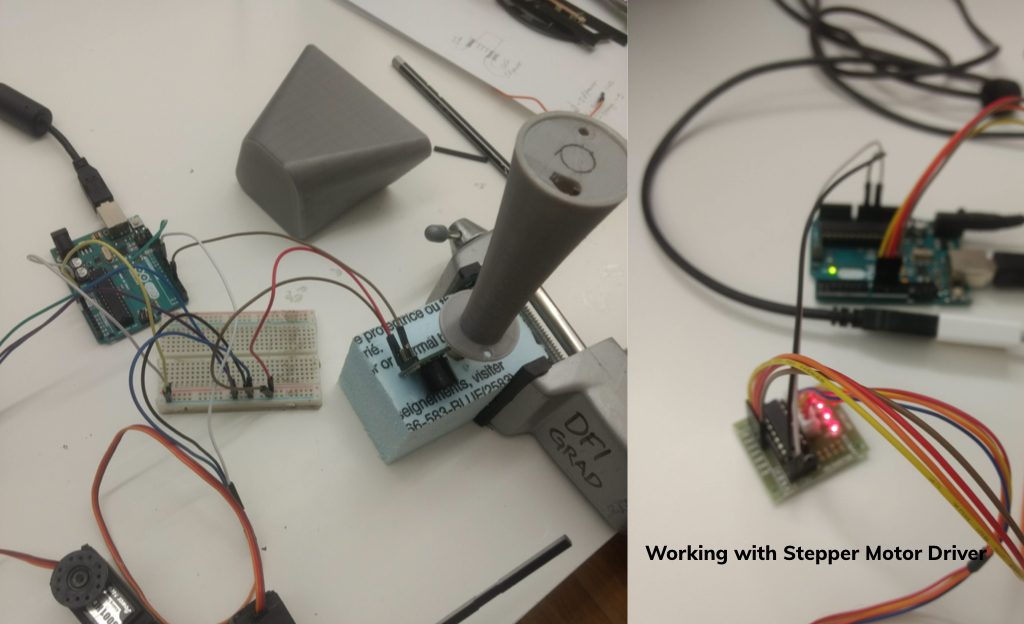 The 3d printed body was too heavy for the Analog servo motor to lift so finally decided to use paper to model the body and reduce the weight and load on the motor. Surface development was done using Auto CAD software for making 3 to 4 different options based on the mechanism and aesthetics of which I decided to work on the design shown in the below image. The arm was laser cut in acrylic and two options were made to reduce the friction between paper and the lifting arm contact surface. 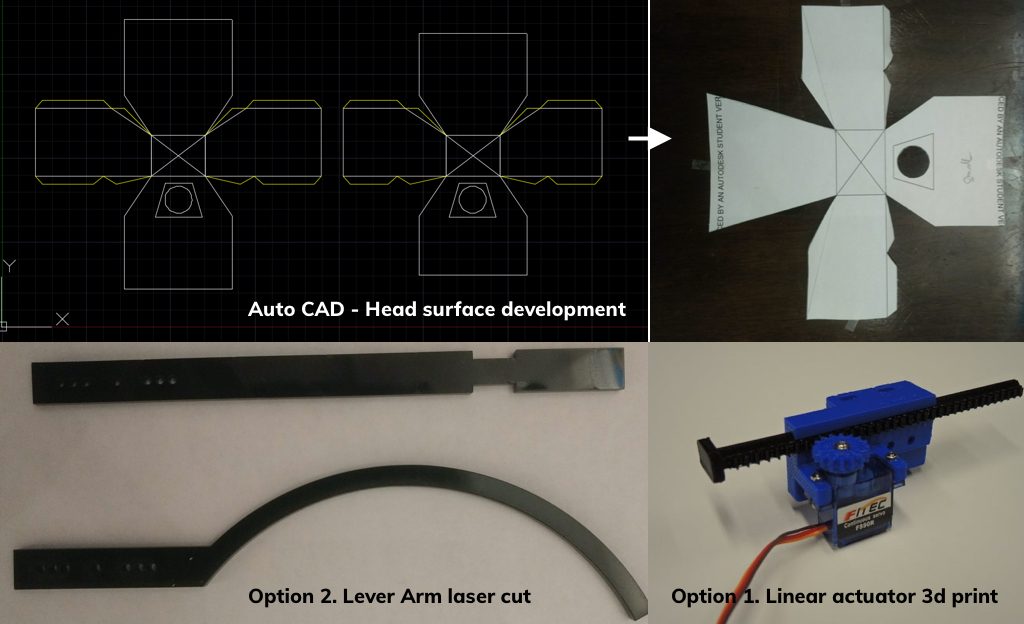 How does it Work? 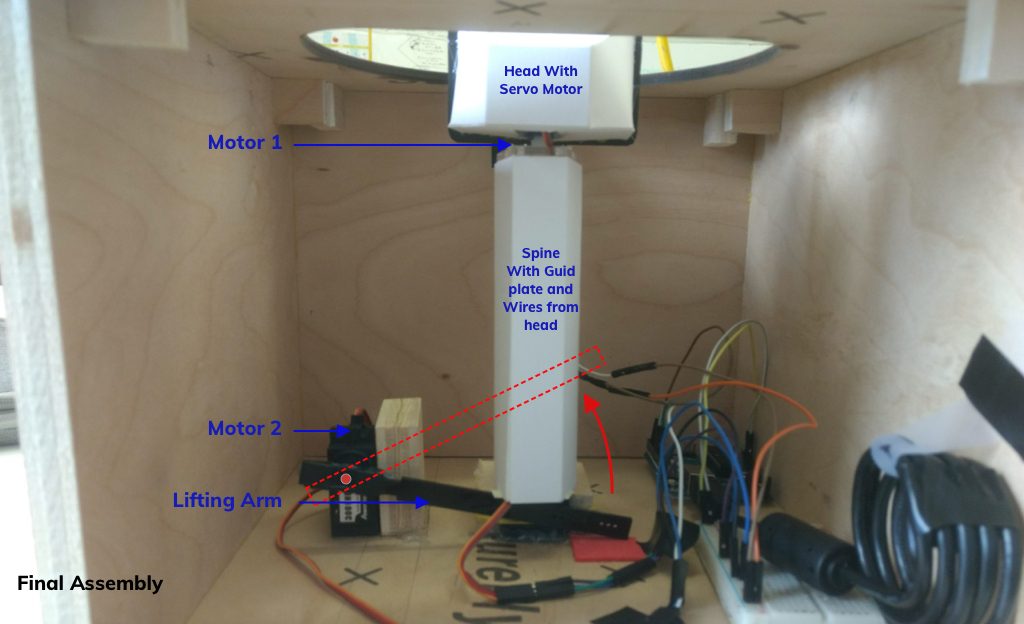 The installations is minimal and simple with just two materials wood and paper that gives a clean finish to the piece. The head is like a focus with a black sheet and white border as if the sensors are installed inside the head that controls the oscillation. In my further explorations and practice I will make sure that the sensor are not directly visible to the visitors as this some time leads to visitors interacting with the sensor and not actually experiencing the installation. 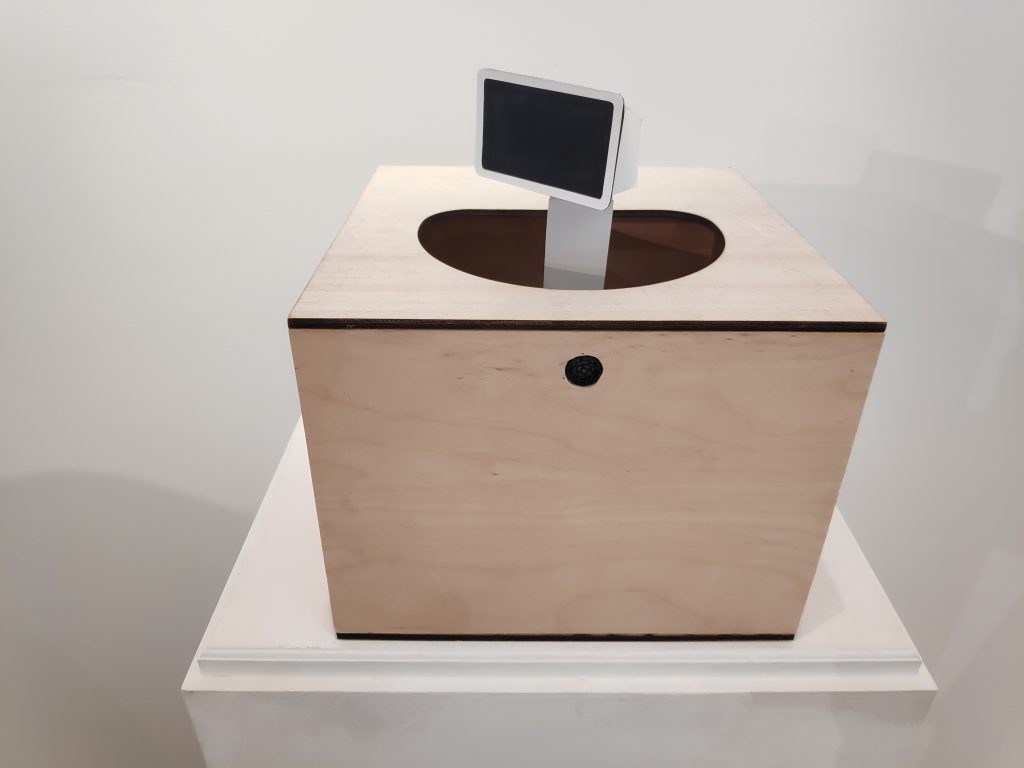 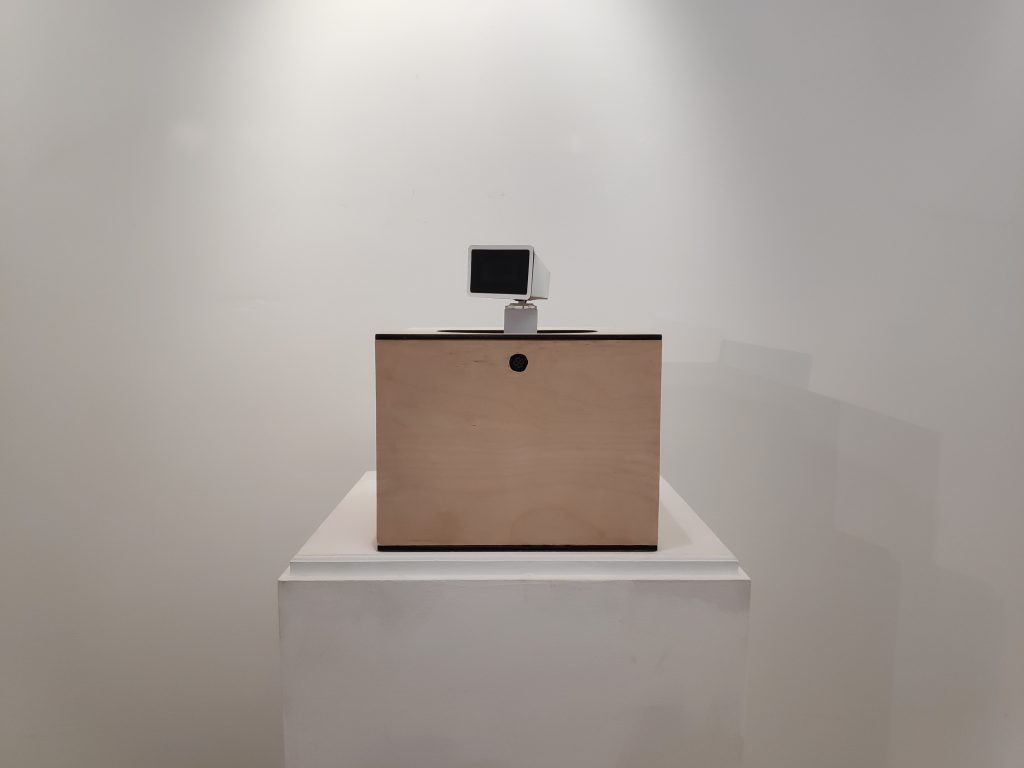 Opto-Isolator (2007), Interactive Eye Robot  -Opto-Isolator (2007: Golan Levin with Greg Baltus) inverts the condition of spectatorship by exploring the questions: “What if artworks could know how we were looking at them? And, given this knowledge, how might they respond to us?” The sculpture presents a solitary mechatronic blinking eye, at human scale, which responds to the gaze of visitors with a variety of psychosocial eye-contact behaviors that are at once familiar and unnerving.

The Illusion of Life in Robotic Characters – Principles of Animation Applied to Robot Animation – Robot animation is a new form of animation that has significant impact on human-robot interaction.
This video relates to and extends a paper we have published at the ACM/IEEE Human-Robot Interaction Conference

The observations were made and recorded at Open Show Graduate Gallery and Centre for Emerging Artists & Designers which provided me with some good insights and learnings for necessary changes to be made developing the concept further. It was fun to see people interacting and playing around a nonliving object as if it had emotions, feelings and  the way Ocular reacted to the viewer’s actions. The interactions were supposed to be only from the front but as the wall card was placed at the side of the installation placed on a high plinth, people tend to read and start interacting from the side and did not really experience the installation as expected but most of them figured out the working as they read the wall card.
Some interesting comments from the visitors: 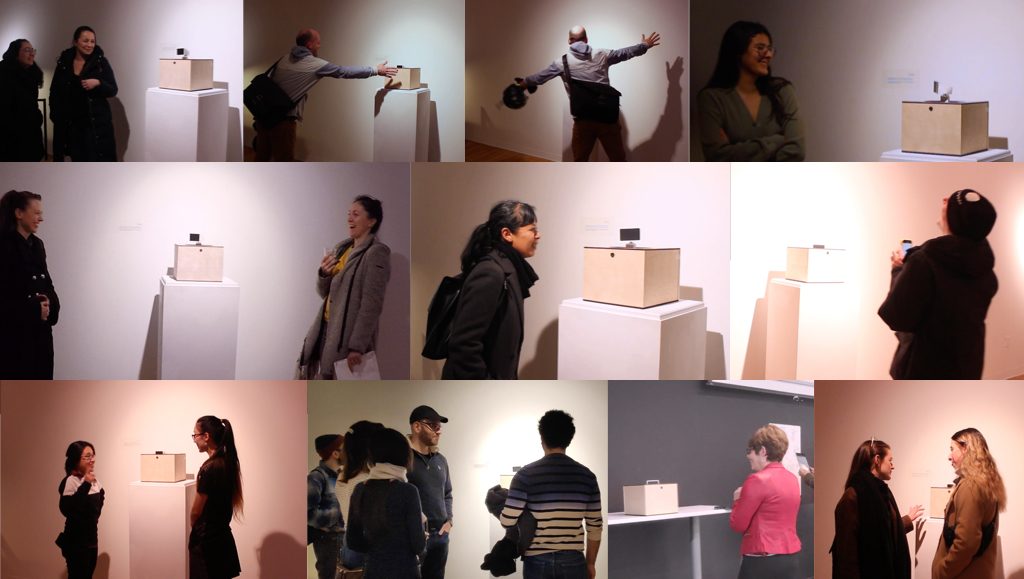