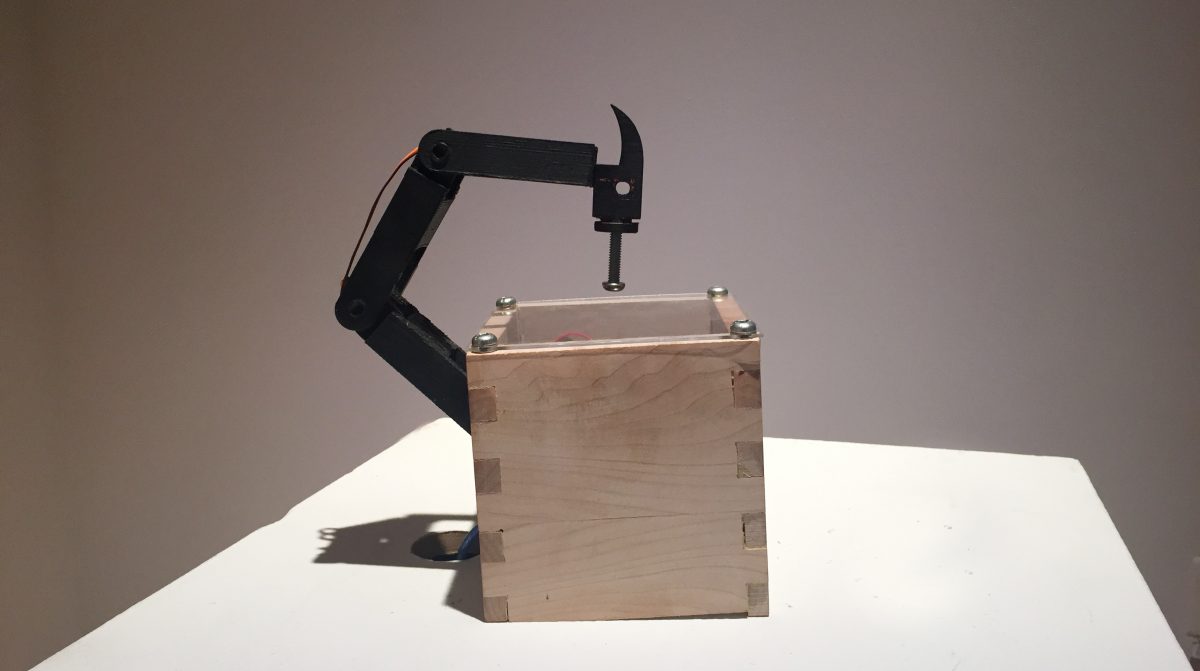 Project Title: What Is My Purpose?

This project is a 5x5x5 inches wooden cube with a 3D printed robotic arm. A hammer head shaped piece is attached at the end of its arm. The arm repeatedly hits the top part of its own body, a sheet of clear acrylic. This robotic piece appears to be self-harming itself.

I started this project by creating a timeline because I thought I should be more organize with this project to meet the tight deadlines.

I modeled my design on Rhino3D to help me visualized the arm that needs to be fabricated with the 3D printer. 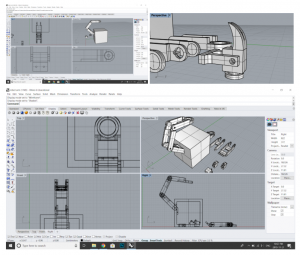 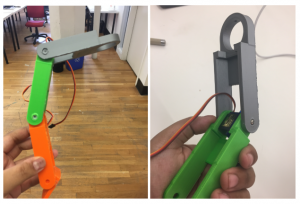 Next is time to code the movements of the arm.

Then I worked on the wooden body part. This went smoothly and pretty uneventful. The lack of tools in the maker lab makes the process take longer than it needed to, but I managed to do it according to my timeline. 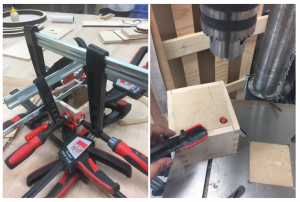 When I was done with the wooden body, I attached the arm onto it.

When I did a test run, it was doing okay. The only problem is the chisel/knife problem I mentioned above. Then I installed the inserts for bolts at the corners of the top of the box to secure the 1/16 inch acrylic sheet.

At first I wanted this piece to be battery run, complete with an on/off button at the bottom of it. But when I tried using 9V battery it wasn’t strong enough to run the two servos. So I asked Kate for help and learned that it’s more about the current rather than the voltage. So I got four AA batteries on series and try to run it again. It was still not enough. Kate suggested to put another four AA batteries and attach it parallel to the other four. And it worked!

However, the battery couldn’t last long enough and the servo started getting weaker after a couple of minutes. It was a hard decision, but I had to compromise and use cable to power the robot from the wall outlet.

For the show, I originally wanted to add delay() so the servo motors get breaks in between and don’t overheat. But when I added delays the motor doesn’t run the same way it did without the delay. 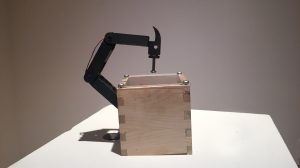 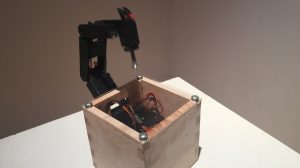 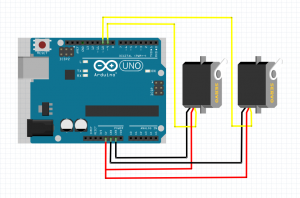 We are constantly surrounded by technology that do tasks for us. When machines do not carry out their tasks properly, they are deemed broken. Can we co-exist with machines that are not designed to serve us, humans? What kind of emotion is evoked by seeing a machine hitting itself over and over? Are we projecting our feelings onto non-living objects? These were the questions that lingered in my mind when I decided to create this robot.

I believe that robots have the potential to teach us, humans, how to empathize again. That is basically the belief that I have that drove me into graduate school and life in general. This piece that I created for experiment 5 is in some way a part of my long term research in life. Can robots teach us, humans, to empathize with a non-living being, and ultimately, with each other?

There has been multiple research that ask the participants about the possibility of the robots getting hurt or where participants are asked to hurt the robot. As Kate Darling (2015) wrote on her research report paper, “Subjects were asked how sorry they felt for the individual robots and were asked to chose which robot they would save in an earthquake. Based on the subjects preferring the humanoid robots over the mechanical robots, Riek et al. postulate that anthropomorphism causes empathy towards robotic objects.”

People tend to empathize more with robots that look like them. I want to push how far can I remove my piece from anthropomorphization as much as I can, and push it even further by making a robot that its whole purpose is to hit itself. That’s why I created the body to look like a wooden cube, with visible microcontrollers, the only thing that makes it looks a bit anthropomorphized is the robotic arm.

The act of self-harming is jarring. It’s emotional. It’s a sensitive topic. But what does self harming mean to a robot that cannot feel pain? It does not have sensors that detect pain.

Not so much about self-harming, but Max Dean’s piece, “Robotic Chair” (2008) is a robotic chair that explodes it self into multiple parts, then it slowly search for its missing piece and putting itself back together again autonomously. The viewers’ reactions were positive emotions. “As stated further on the Robotic Chair website, the chair has been shown to elicit “ empathy, compassion and hope ” in its viewers.” (Langill, 2013).

I acknowledge that my approach is very philosophical. The title of the work itself is “What Is My Purpose?” a question that even us humans have not found the answer to yet. I hope to make people think that it’s okay for machines to not have a purpose, to not serve us, still exist around us, and for us to still empathize with them. That way maybe humanity could learn to empathize more with each other.

The exhibition was lovely. I got to talk to so many people about my research, receive feedback and reactions, or just simply chat with them. Unfortunately, the servos of my piece got overheated and busted 30 minutes into the show, I thought it was the arduino but I unscrewed the piece to hit the reset button but it still didn’t change anything. I tried to let it cool down for a couple of minutes but it also didn’t work. I have a video of it running so I was showing the videos to people who were interested in seeing it. Thankfully it was running when it was the busiest.

People told me they liked my work. I asked them what they like about it, and a couple of them said that they think it’s funny and silly. Some said they can feel the frustration of the robot. Some felt so empathetic that they felt bad watching the robot hitting itself over and over. One person even said “idiot robot” at it. It was a mixed bag of reactions but most people enjoyed the piece.

Darling, Kate. “Empathic concern and the effect of stories in human-robot interaction”. with P. Nandy and C. Breazeal. proceedings of the IEEE international workshop on robot and human communication (roman). 2015.