“Eternal Forms” is an interactive artwork incorporating geometric elements in motion. The forms accelerate their rotating speeds when a user interacts from ranging proximities. The construction of the elements is highly precise along with accurate measurements to generate an optical illusion of constant collision. The framework establishes from a circular grid system, which is designed by several interlinking ellipses running across a common circumference of the centre ellipse.

They will be multiple interactive artworks mounted on walls where the user can observe the changing rotating speed based on distance proximities. These artworks will be animated by Servo Motors.

10 Nails and hammer – For mounting the artwork.

Wall space of 5ft x 3ft to mount the piece.

Project Description: ‘Tête-à-Tête’ <3 is a private-dating platform. The term, ‘Tête-à-Tête’ (French origin) refers to a secret one-to-one conversation between two people. The communication is encrypted through the use of ‘Cupid Cryptic Codes’ that gets transmitted through the playing of the mini piano keys. The objective is to have an ‘ongoing secret chat’ while being camouflaged as a piano player. There are ten piano keys in total which generate the Solfège/Solfa – an educational technique to teach musical notes and sight-reading skills and familiar beginners with lyrical patterns. For example, ‘A’ is denoted with one Red blink and generated the musical note of ‘Do’. Similar to an actual piano, the first eight mini piano keys produces Do, Re, Mi, Fa, So, La, Ti & Do consecutively. The last 2 keys, produces ‘Beep’ sounds denoting to set of odd and even numbers. The code syntax incorporates Alphabets, numbers, several punctuations in addition to a few emojis. 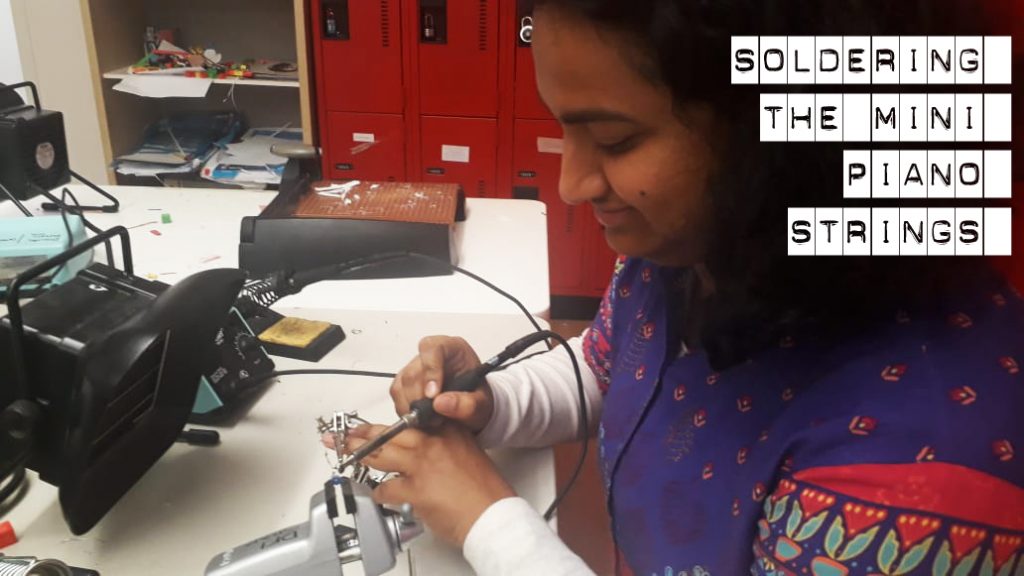 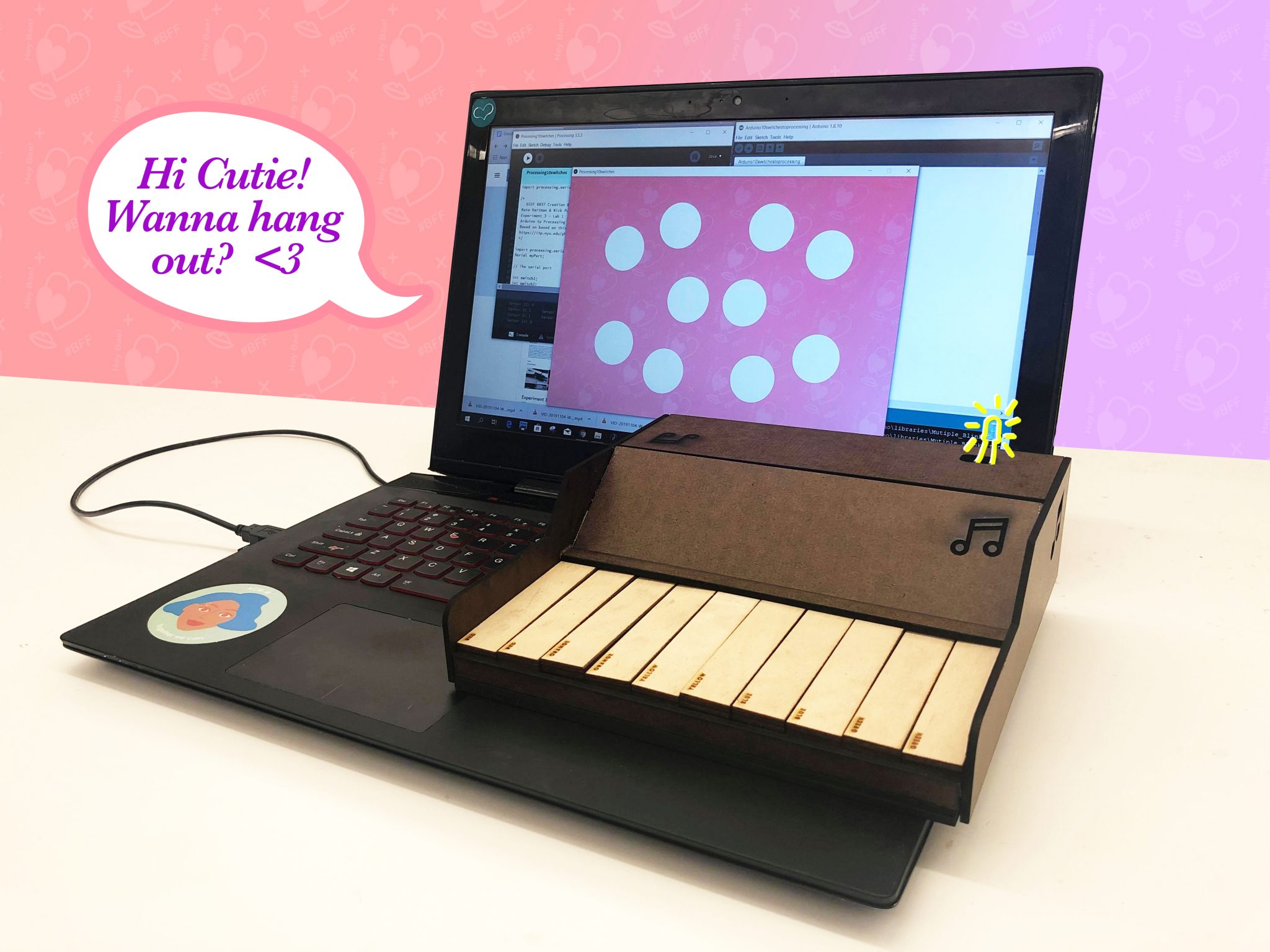 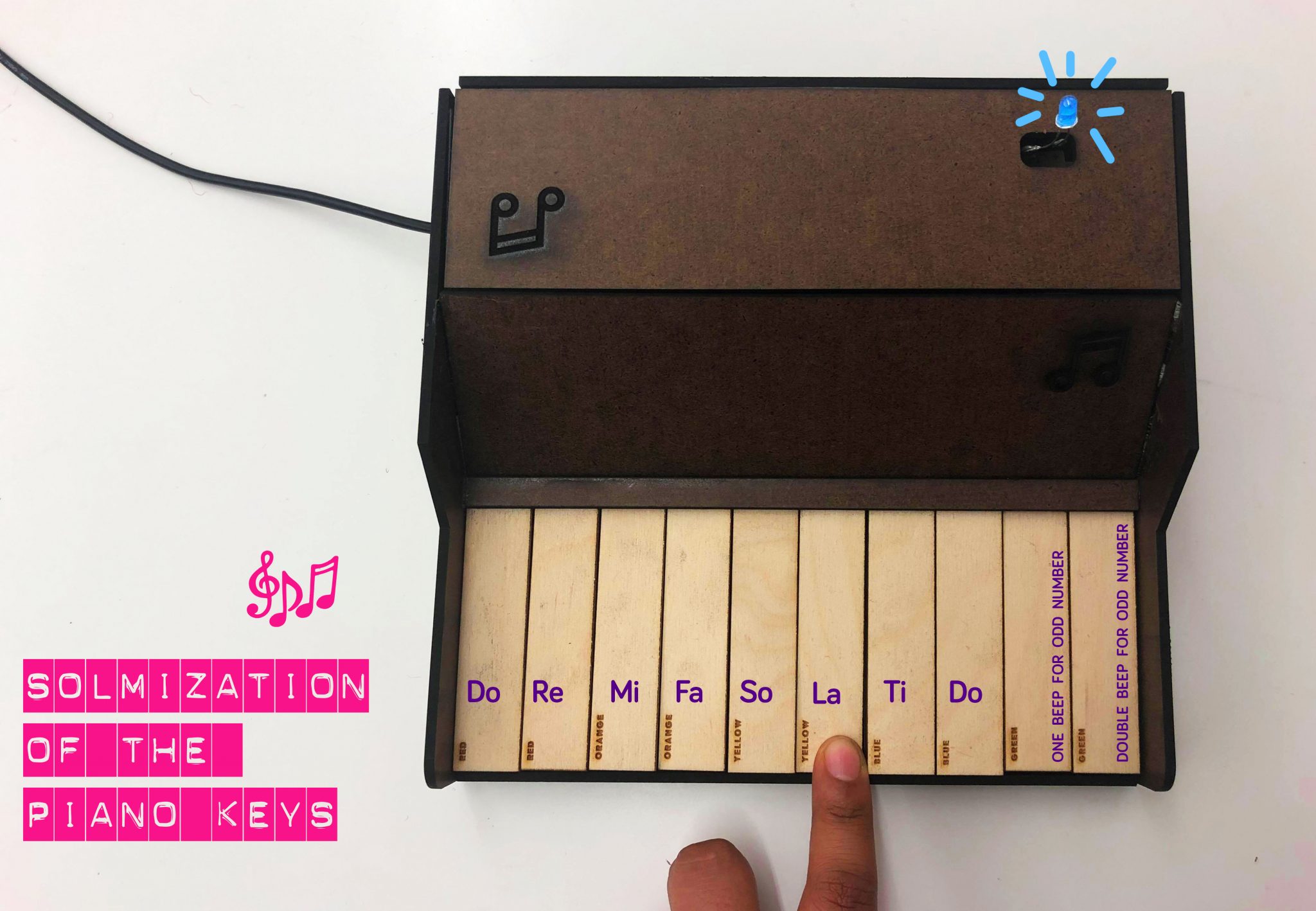 Question: Guess what Neo is encrypting?

I started observing ideas post observing the Mud Tub, Massage Me and Giant Joystick. One day, I came across an article on ‘Secret Dating’ and its reasons. Foremostly, its a common practise among the LGBT community as non-heterosexual forms of expressing love is a taboo in several regions of the world. In many Asian and African countries disclosure of such relationships might end up tragic incidents where the partners would be jailed, penalised, killed by relatives or chemically castrated. One of the reasons could be that the unconventional relationships are perceived as an act of humiliation and shame in society. Thus, homosexual lovers are often forced to pursue relationships in secrecy.

Being from India (one of the largest populous country), I have witnessed how dating, kissing or any form of displaying affection is publicly scowled. Whereas molestation, on the other hand, is ignored blatantly many times. Instead of teaching children on lessons of communal friendships in additions to having healthy relationships, parents wrongly depicts romantic intimacies as vile and inappropriate for youngsters. For example, during my 12th grade, my best friend’s mother told her that making boyfriend is indecent and girls who date boys will always perform poorly in academia.  This was because her parents considered ‘teenage love’ as a distraction and feared that their daughter might be engaged in pre-marital coitus.

Contemplating on the notion of secret dating, the idea of having a secret system of communication struck my mind during the next week. I commenced reading about cryptic messaging and cypher networking which had interested me since childhood. Inspired by ‘Morse Code’ and ‘Tap Code’, I attempted being an amateur cryptanalyst and created my own set of cryptic codes using LEDs blinking. It was a struggle in the beginning as I had to conceive how to implement this transmission via serial communication within a limited set of 12 digital pins. In the fullness of time, after innumerable trials and errors, I came up with ‘Cupid Codes’ and strategise a systematic table to remember the new language. These set of multi-coloured blinks on Processing screen will help to transmit messages between two lovers secretly. While the other people surrounding the environment will assume that the participants or lovers are actually engaged in playing the Mini piano because the codes are conveyed through the playing (audio and visual output) from the piano keys. 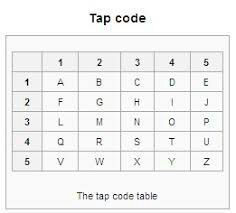 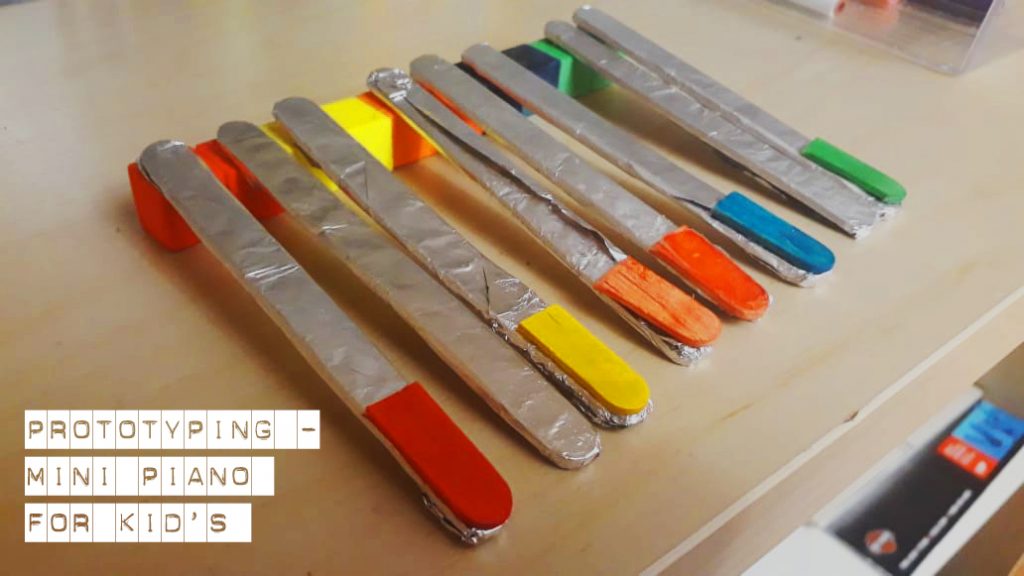 Utilising the knowledge of DIY switches from Kate’s class 12, I tried to make the mini Piano keys wrapped with Aluminium foil to test the conductivity of electricity. However, this prototype’s form turned out to be very childish and juvenile. Hence, I had to reserve this one as a kid’s version because of its bright colours and playful mechanism.

After referring videos of DIY mini piano on YouTube and instructional images from Pinterest, I began implementing the gathered knowledge in developing my own little piano. Creating the piano switches as the DIY switches were intensive and tedious. Afterwards, I soldered the jumper wires, resistors with the copper strips attached on the piano keys. The idea was that, when these piano keys will be pressed, it completes the whole circuit and emits musical audio. There are 10 piano keys that are colour coded in Red, Orange, Yellow, Blue & Green. The 2 green-coloured keys are for odd and even numbers respectively. But rest of the eight keys are to represent Alphabets, emojis, phrases and punctuation in different combinations. Every 10 keys emit 10 different musical notes ie. the Solfège or Solfeggio, a.k.a. Sol-fa, Solfa, Solfeo, which follows as Do, Re, Mi, Fa, So, La, Ti, Do and Beep sounds.

Replacing Aluminium with Copper because not only Cu is a better conductor of electricity and its strips are harder than Al foil. Cryptic communication language was developed involving of colour blinks that appeared on the screen at different timings which are to be used and exchanged between the participants or partners for flirting, messaging and calling each other. Every piano key generates different sounds making the messaging activity seems like playing of a musical note. Since, this instrument functions like a real piano, non-participants surrounding both the partners will assume them as piano players while they can happily date their lovers in peace and privacy.

Project “Pro Yoga” blends the idea of fun and fitness for everyone. It’s a fascinating installation for exercising where both the body and the mind are engaged for physical, mental and spiritual upliftment through the art of Asanas. This interactive training set-up can be utilized by any fitness center, yoga studios and at home. The goal of this activity is to make the tri-colored sets of LEDs activate at various heights by stretching out one’s limbs towards the Ultrasonic Range Finders through different Yoga positions. The goals will be set by the verbal instructions from a yoga instructor in the prototype, while the next generation would be a virtual instructor. The activity of making the LEDs activate functions as an indicator to let the participant know they are in the correct position. For example, the instructor might ask the participant to make the blue LED (placed in front at height 5’2 ft), red LED (placed on the right side at ground level) and green LED (placed behind at height 5’2 ft) light up together. The user’s objective is to stretch out his/her arms and legs to make the specified LEDs activate, hold that pose steady for a set amount of time before the next pose.

Setting the Ultrasonic Range Finder at different heights and orientations for testing the LED’s blinking functions from various ranges of distance. 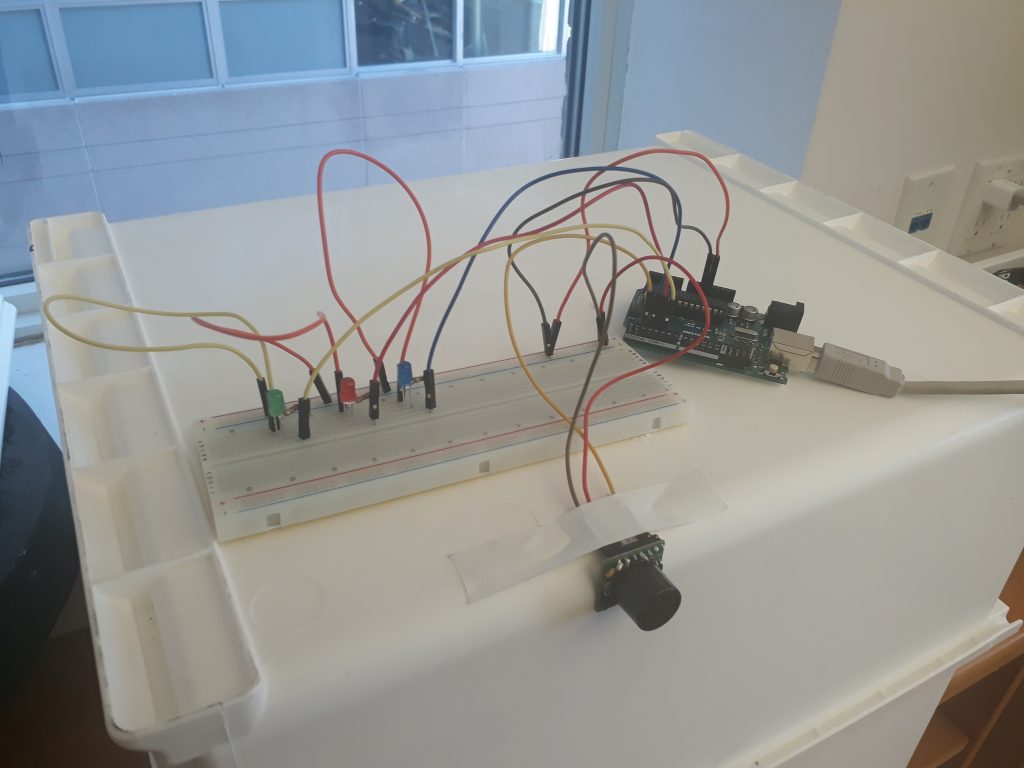 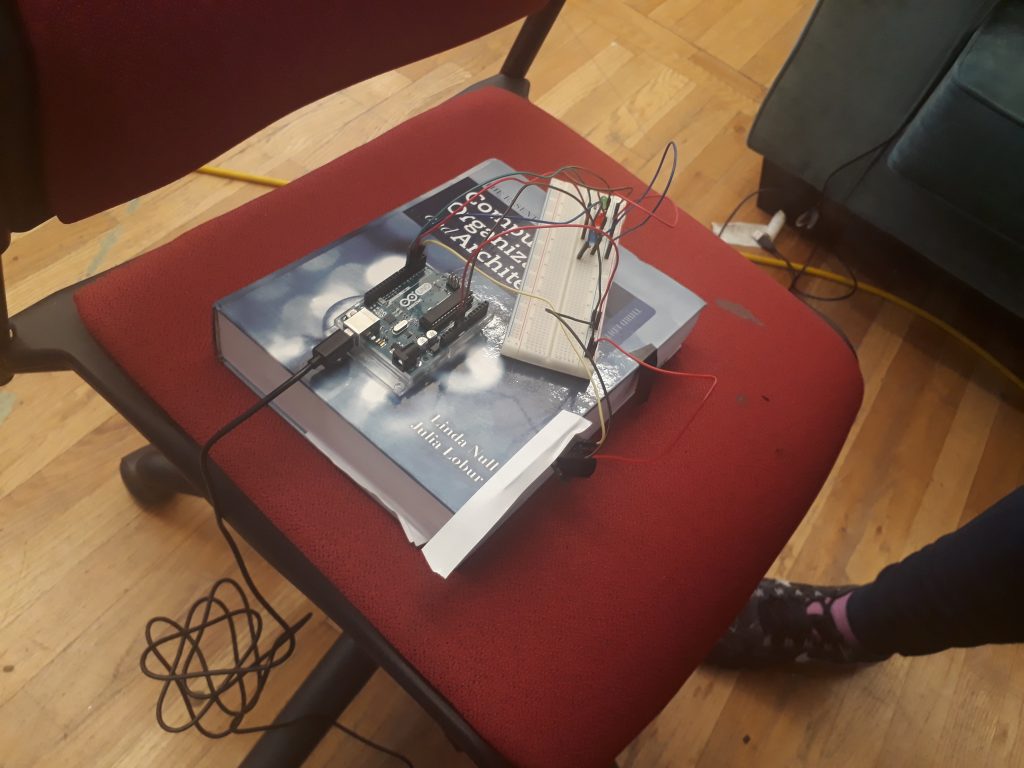 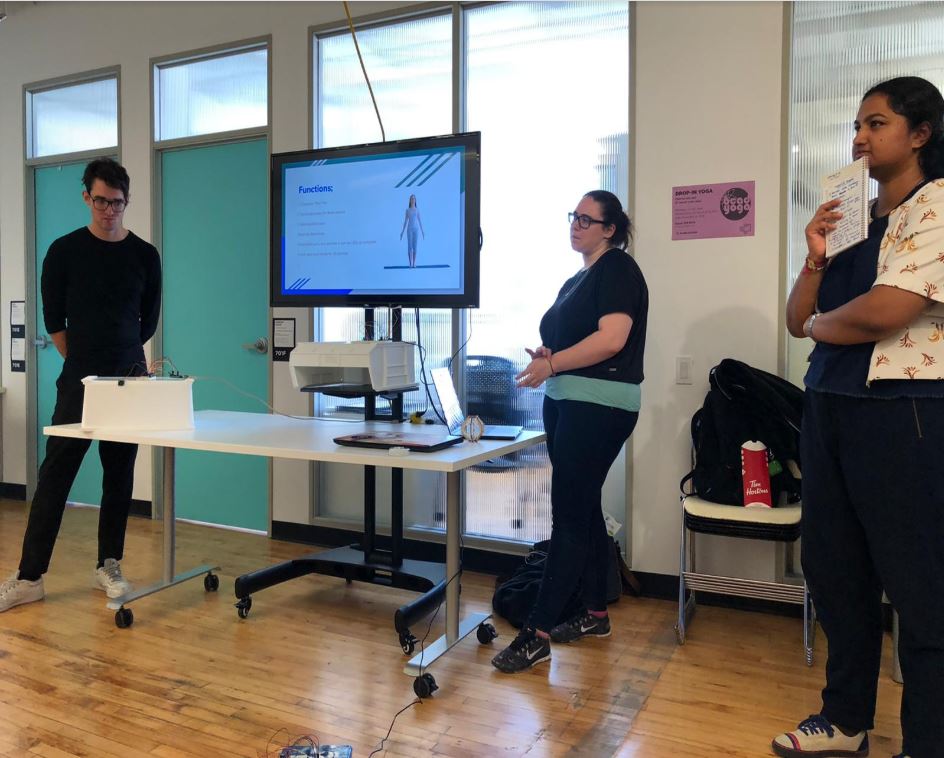 Several ideas involved in creating a space for performing arts and divergent forms of physical activities. The first involved a dance contest, where a ‘Thumbs Signal Sticker’ could be attached to the servo. Essentially a multiplanar Dance Dance Revolution, LEDs are triggered by the distance sensor. The servo attachments can rotate the ‘Thumps-Up’ (180° – indicating a good grade) or as a ‘Thumbs-Down’ (0° – indicating a bad grade) or if the performance gets undetected it turns into a ‘Thumps in the Middle’ (90° – indicating an average grade).

Multiplanar DDR led to a ‘Body Twister Game’ where the LEDs will blink according to the movements of contestants. We planned to create groups of 2-3 and follow the rules of the original ‘Twister’ game, where contestants would get tangled through trying to activate LEDs. In this version of the game, sensors would be placed at three points around the user to create a common area where the sensors converged. Players would need to be mindful of all body parts present in order to trigger and maintain colors for a specified period of time.

Post several trials and deciding earlier ideas were lacking without a further developed interface, we worked our project into a ‘Health and Fitness System’. We decided on an interactive installation that would be enjoyable and healthy, a gamified home yoga center. In this version, a user becomes more mindful of the space in which they are occupying, allowing them to return to a meditative state while engaging in their practice. Through the use of changing colors, harnessing spiritual meditation and mindfulness of one’s body through a guided practice can be encouraged without interrupting a user’s thoughts. We further refined our brainchild into ‘Yoga-Training equipment’ where three of the Ultrasonic Range Finder -LV-MaxSonar-EZ0 would be placed in a triadic arrangement. Each section is accompanied by three LEDs of different colors, ie. Red, Blue and Green. Each one of these sections is placed at a different height, orientation and the code is calibrated differently depending on the target limb used on that particular sensor.

The idea is to activate the ‘Blinking’ functions with the aid of Yoga Postures. While calibrating within the code, we had to keep physiology and the body motions of yoga in mind as they relate to the distance sensors.

Initially, we tested the prototype by using one LED and observing how it blinks with input data from the distance sensor. Adding on more sensor/LED setups, we experimented with orientations, lengths and heights of the three sensors.

The code is relatively simple, it involves activating specific LEDs based on input data from the distance sensor. The only issue was trying to find the best-suited range from input data to make holding the pose difficult while not impossible.

Moving beyond the context of this project, the use of RGB LEDs, battery packs, and additional sensors would be investigated to create a product that is more compact, and able to be placed in a room without wires being shown. This would only require small changes to the code framework, in addition to some hardware upgrades to swap LED types. While selecting the yoga posture for our installation, we had to consider various factors. We shortlisted simple postures that could be carried by beginners, elderly individuals and even kids. These are enjoyable, healthy and easily integrates with our Arduino installation. They are listed below as:

Execution: An example of an experiment scenario

This project involves a YogAI, (Yoga Instructor)who focuses on and guiding the user through the workout. It extracts anatomical key points to detect the posture configuration and give continuous feedback on posture correction. Our project derives from this idea in the sense of having a user-guide throughout his/her training session. But Pro Yoga focuses more on easy and universal poses in addition to special focus on the stretching of the limbs along with positive reinforcement (LEDs blinking).

5. This project involves an LED that changes color according to the movement of one’s hand towards the four directions. We were referring to its set-up and coding for our project development.

6. We referred to various images of Yoga and Asana positions for studying, comprehending and shortlisting postures that can be used in our project. We went for simple poses that could be carried by beginners, elderly individuals and even kids.