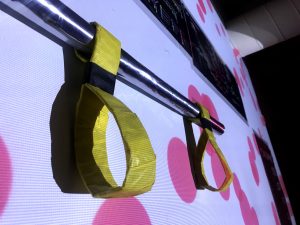 Project Description
Commuting Fun is an interactive installation aiming to bring some fun to the mundane day-to-day commuting and to take away the stress, anxiety and even anger people may experience during rush hours. Aesthetically interesting visual patterns are projected onto the interior of the vehicle and can be altered through passengers actions on the train. Expected actions on a vehicle such as sitting on a seat, grabbing the handles, and tapping on a ticket machine can generate unexpected changes in the visuals. Commuting Fun provides new possibilities to start people’s day with fresh and relaxed minds. The project aims to utilize as much space for exploration and interaction as possible, encouraging passengers to move around within the vehicle and get active.

Ideation Process
I have been wanting to make an installation for this class for a very long time, and finally I could do it for this project. I’ve looked up how different interactive museums worldwide incorporate different types of interactions. A lot of them use graphics as decorative elements to the interactive environment, and certain parts of the graphics react to where there are physical interactions from the participants. Based on the same idea, I wanted to decorative design patterns on processing which get projected to all surfaces in the installation space as if they are wall papers.

To add more interesting and tangible pieces as part of my installation, I came up with ideas such as putting balloons and exercise balls because their shapes echo the polka dots pattern on the walls, which could add to the aesthetic appeal. For example, one of the Nuit Blanche exhibitions I went used balloons in the installation space with lights around to amplify the visual appeal. They could also serve as switches to the circuit, which could trigger changes in the image of polka dots in the projection when people pull on the balloons and sit or move the exercise balls. The whole space should serve as a visually-pleasing play space for people. Moreover, I thought about how participants could also be part of the exhibition. If they could all wear whites, their clothes could be a canvas for the projection of the polka dots as well. However, considering the limited timeframe to figure out the logistics to add balloons and exercise balls as part of the circuit, I had to change direction to implement something that doesn’t move much so it causes less of a challenge to have a stable and secure circuit. 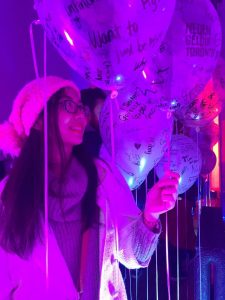 Nuit Blanche Exhibition That Inspired Me

One day on my way to commute to school, I noticed people interact with lot of objects in daily life without paying much attention to it. Commuting alone has lots of things people interact with, for example, tapping on a machine to get on a streetcar, pressing the stop button to get off, grabbing onto handles to stay stable. These are objects that have been carefully and systematically designed and put into certain places in a vehicle to ensure the functionality of a vehicle, and people are so used to them function in a certain way that they barely pay attention to them. What if something unexpected happens when people interact with a vehicle the way they normally do? Would they behave differently? Eventually I decided to recreate a part of a subway for my installation and have objects such as seats, handles, buttons act as switches to change the way graphics behave. The graphics will then be projected back onto the subway to be an integral part of this space so the digital as well as the physical space become as a whole.

Project Context
Inspired by the article Tangible Bit: Beyond Pixels by Hiroshi Ishii who prefers the multi layers of interactions in TUI over the one dimensional GUI interaction between users and the digital screen, this project takes on the challenge to explore the interactive relationship between the physical and virtual world. An installation becomes an inevitable choice as this project goes further into the ideation process due to my awareness not to confine the physical interactions of participants within the space of a single object, but to have multiple objects within the installation space for participants to walk around and discover.
Eventually the final decision was made to recreate TTC transit vehicles as the interactive space because of the amount of tangible things to be worked with, for example, stop buttons and wires, POP machines, seats etc. People could interact with the things within the installation space without being provided with any instructions or guidance as most people have predefined ideas in mind of how to interact with the objects within transit vehicles from day-to-day commuting experiences, which could minimize possible confusion of the interactive experience. As objects are spread out across the vehicle, it adds another level of interactions which enables broader movements of participants’ bodies.
An effort has been made to keep the physical and virtual world inseparable from each other. Having decided to incorporate objects on vehicles as switches to control the graphics interface, the next challenge is how to integrate it into the physical world organically. Coming from a Chinese background, I have seen themed subway trains in China, the interior of which are covered with decorative design during certain festivals. Using the graphic interface as a decorative design which is projected onto the train becomes my focus. While people interact with different objects on the train, the design of the interior of vehicles changes based on the interactions. 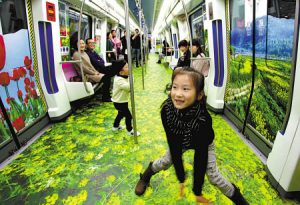 However, with technical limitations, I’m unable to map and project the decorative design pattern onto all surfaces of the recreated vehicle installation space, which has led me to think of other ways of projection methods. In China, a lot of times for commercial purposes, a series of pictures will be put up in the tunnels outside the train. While the train is moving at a fast speed, the windows will be used as a frame for the animated commercials outside. For this project, the window area will be utilized in a similar way to display the visual elements, which simplifies the projection process yet still enables the visual elements to be an integral part of the installation.

Drawn by the minimalist style of polka dots art installations by the Japanese artist Yayoi Kusama exhibition Infinity Mirrors at the AGO, I chose to use polka dots to be the visual elements of the decorative design. It strikes me how something really simple yet could still be extremely visually stimulating. Sometimes simplicity speaks more to the audience than a compilation of elements. Yayoi Kusama’s obsession with polka dots comes from her mental disorder caused by her difficult relationship with her mom while she was a child. She was encouraged to draw and paint by a therapist to as an outlet for her oppressive feelings. The statement behind her artworks created by the carefully chosen colors and deliberately arranged compositions is truly powerful on viewers such as myself. I decided to choose a playful and vibrant color palette for the dots and background because I believe this could soothe people’s anxiety during rush hours.

Work in Progress
I wrote the code at first using potentiometers and then replaced them with velostat pieces attached with aluminum foil to make sure the code works. 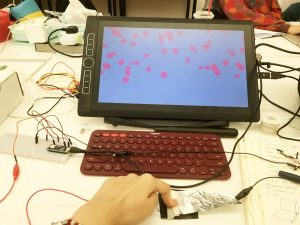 Once I decided to recreate the subway space, I jotted down a list of things which can be found in a subway in Toronto. I printed out posters and recorded the ambient sound in a subway on my way to school.
The most challenging thing was to make the chairs in our studio resemble the seats in a subway. I found red fabric at Michael’s that has a similar look and feel as the fabric on a subway seat, and found a silvery metallic adhesive film which I pasted and sewed onto the red fabric. This process was extremely time-consuming as I had no prior experience of sewing. It took me almost 2 days to finish making all three pieces of seat cover. 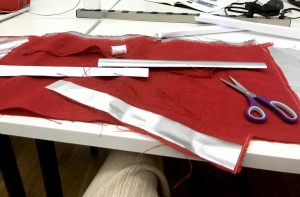 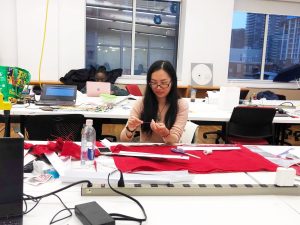 I also used card boxes to recreate the yellow handles on the TTC subway. Initially I intended to use them as switches as well, however, I couldn’t find a good method to secure them in place while people pull on them. Eventually they became props which add to the look of the recreated subway space.
After taping all three pieces of seat covers onto chairs, I put sensors under the covers and connected them to the circuit. I had people sit on the chairs to see if it created desired changes in the graphics, made changes accordingly. 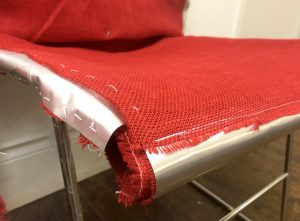 However, after a few tests, the aluminum foil is starting to crumble and break after people sit on them many times. This has led me to seek alternative conductive material that can endure stretching a bit better. Conductive fabric became the enhanced alternative.
Finally, the chairs are ready to go. 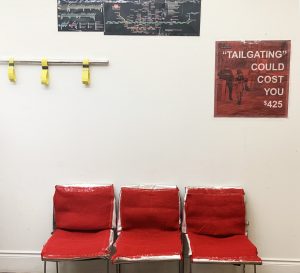 Final Look Of The Installation 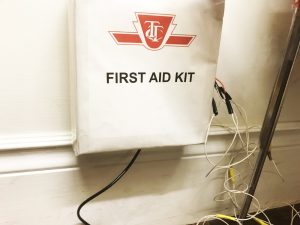 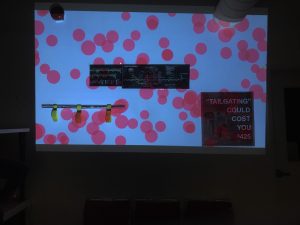 Polka Dots Projected Back On The Train

Handles To Grab On To