The task for our body-centric class this week was to develop a component or element for a conceived design using two instances of either felting, weaving or knitting techniques. In my case, I chose to pursue felting and knitting. 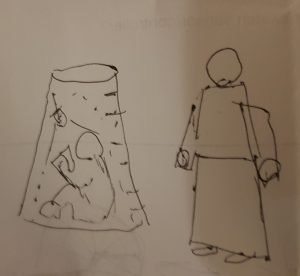 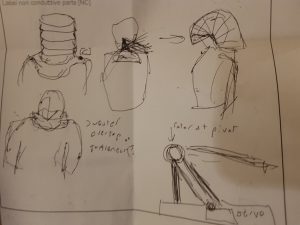 My initial design concept was to create a fabric dress that one could retreat inside for privacy; a wearable tent of sorts. This concept simplified to a mechanically-retractable hood, then to gauntlets that could provide coverage depending on whether a hand was clenched or not. The devices I chose to design were to act as elements of the larger idea of realizing the gauntlet. As the glove would need to be activated in some sort of manner, I focused on developing switches activated through tension or compression. What resulted included a fingertip- activated pinch switch that could be integrated into an interior mitten to activate an external closure and a felt ‘stress ball’ activator that could be positioned within the palm to activate the gauntlet (and otherwise dangle like a pom-pom from the wrist). 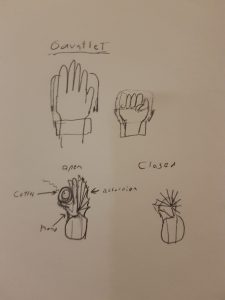 With my unfamiliarity with fabric circuitry, I wanted to keep my components relatively simple and base my designs off of examples shown in class. It was hard for me to envision any of the techniques as critical components to the design of the device as my heart was set on working with a fabric that could be easily cut to shape based on unrolled geometry from Rhinoceros, but having now worked with the materials and techniques in question I feel more confident in the potential to use and incorporate more analog methods into my concepts moving forward.

For the knitting component, I initially decided to make a knit button based on a design shown in class consisting of two conductive layers and a middle non-conductive layer, activated in compression. 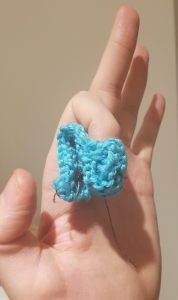 The last time I knitted was at least a decade ago. Familiarizing myself with the process again took a solid 30 minutes of watching a 10-minute YouTube tutorial. Becoming more comfortable with the process felt like a bit of a double-edged sword as I would occasionally forget where I was in the process of the technique if distracted or mindlessly repeating the loops.

But I picked it up the next day and watched 2001: A Space Odyssey for the first time… which is possibly the best film to watch in the middle of knitting. 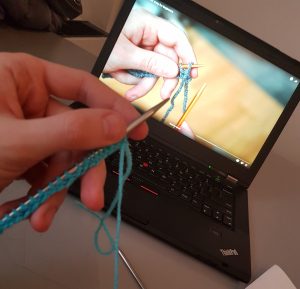 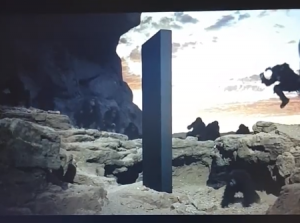 The knits went smoothly, but slowly. Thanks to my incredible character trait of laziness I imagined ways that I could create something interesting with the small piece I eventually would cast off. One of the first ideas that came to mind was to attach a second element to the midsection of the strip and create a pinch switch activated when the three extensions of this material would be in tension. This led me to look up how knitted pieces could be attached after being cast off, which turned out easiest with a crochet hook. This in turn inspired me to consider using the existing knit strip over top my fingertip; I wouldn’t have to create an extra piece and could use the tip as a component in a pinch switch. 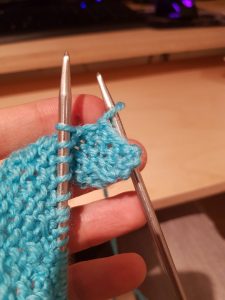 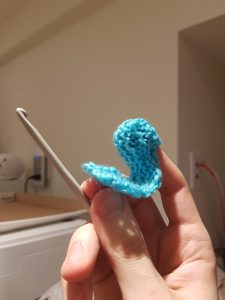 Maybe if I had the foresight I would’ve sewn the conductive thread into the knit material prior to knitting the conductive elements but a simple star-sewn patch did the job suitably for prototyping purposes. 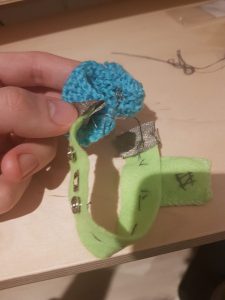 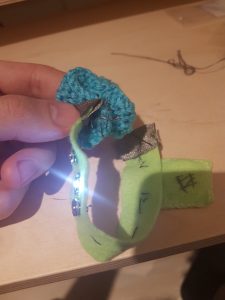 With the felting process I decided to create a simple pinch pom-pom based on the examples. Why not just activate the gloves with a ‘stress ball’? The idea to dangle it from the sleeve of a coat or the device came later. 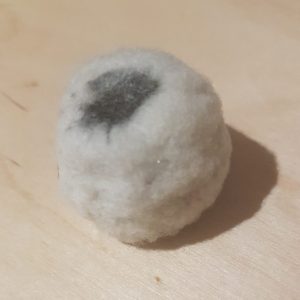 I stabbed a puffy ball of wool with a felting needle until it firmed up on both ends, then established conductive felting on both sides of the midsection of the woolly ball. I tested the device to see if it worked throughout the process; definitely most effective when fully compressed properly based on the manner I injected the conductive thread. Squish-n-go! 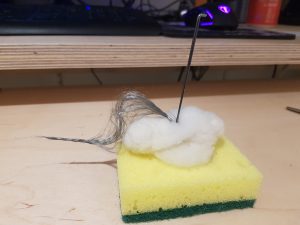 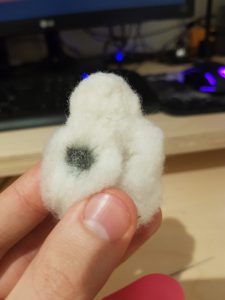 I would be interested in trying again but with the conductive thread intermingled throughout the entirety of the wool in the future but I wanted to go with a design that I knew would work for my first attempt at felting. The method seems very effective as a means of concealing the circuitry as the felt seems very accommodating to the potential of it being stuffed with logic chips or the like (I would have to test how effective of an insulator the wool is and whether I could make it accessible for repair). 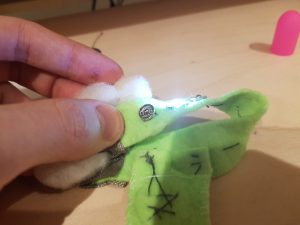 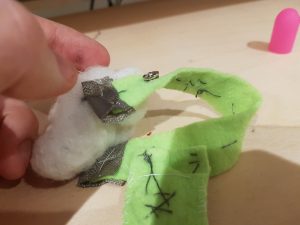 Working with these techniques took me out of The Comfort Zone and into a realm I have always been excited and interested in but never brave enough to summon the initiative and work with. 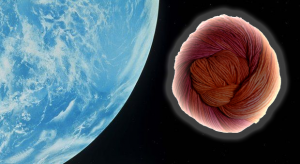 In addition to lecture notes provided by our instructors, I reviewed the following YouTube tutorials to learn how to do the techniques used in these devices.

RJ Knits. “How to Knit: Easy for Beginners” Retrieved from  https://www.youtube.com/watch?v=p_R1UDsNOMk

HappyBerry Knitting. “How to Cast Off in Knitting”. Retrieved from https://www.youtube.com/watch?v=oTAO80lAQOs