For the purpose of this experiment, I created two conductive controllers using yarn, felt and some conductive textiles. The prototype created is a battery operated bracelet with a felt button which turns the lights on. This is my first try with e-textiles so I wasn’t really sure what to expect. I noticed through the process that without resistors controlling the flow of electricity it was very easy to burn out a battery which made the process more tricky then expected. Here was my journey creating and testing an e-textile. 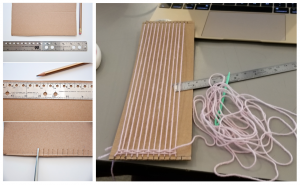 With the help of a tutorial from the weaving loom, I created a cardboard loom very quickly. I’ve never woven yarn before so I’m not sure how this holds up to a regular loom but I was really impressed how easy it was to make and how effective it was. It didn’t take mush time at all for create the loom and begin weaving. The pattern of a weave is very simple as well, under and over. The only issue I ran into was keeping the shape of the band. After a while I noticed that it was tapering in as I was weaving so I tried to loosen the yarn.

There needed to be two points of conductivity to flow electricity through the woven bracelet. Once I have about 3 centimetres woven I added the thread. I left some space without conductive thread because I will be adding a felt ball/button later and I don’t want it sitting directly on top the circuit. I pulled the conductive thread all the way to the other end of the loom and tucked it in at both ends to keep it still. Once that was complete, I continued the weave until I reached the desired length.

Creating the felted ball was an easy process but it is also very easy to poke yourself with the extremely sharp needle. Even with the finger protectors, I poked myself a few times. Go slow! Trust me on this. Since I was creating a button, I needed the conductive felt to be inside the ball so it would not trigger the bracelet until pressed. I started with laying the felt flat on the sponge (with the conductive piece on top) and started tapping the needle through. As I went I folded over the felt to create a ball and continued tapping the needle through. I made sure all the conductive felt stayed inside the ball while I was doing this.

This was my first time using these kinds of LEDs so I quickly tested them all to make sure they worked before I sowed them in. There was already two conductive threads running though the weave but I was worried it was not enough thread to seal the circuit. When it came to sowing in the LEDs, I kept a running line of thread through the positive line of lights and another running line through the negative line, making sure the 2 lines never touched. In the middle image you can see that I tucked the running line of conductive thread into the weave so it was hidden.

When it came to testing I was successful with the felted ball but not so much with the LEDs that were sown into the woven bracelet. Out of five LEDs, I was only able to get one of them to light. It was confusing why only one worked so I decided to try some trouble-shooting to see where I went wrong.

Using the e-textile testing tool I created, I check the connections through out the bracelet. When placing the tested lightly on top of the bracelet it light up right away. Since I had already tested all the LEDs before the sowing, I was really confused as to why the others weren’t lighting. I loosened some parts of the weave to see what was happening with the connection points. It all seemed fine. I tried adding in some more conductive thread to strengthen the connection to the LED, no luck.

Even though I wasn’t able to see figure out why only one LED worked I still wanted to finish up the prototype to see if it all worked together. I tucked all the loose yarn from the weaving process into the woven bracelet and trimmed all the excess. It was starting to look like a finished piece. I added a felt battery pack to the back of the bracelet and snapped it in place. Again, only one LED lit. Then I added in the felt ball to see of it would trigger the light. I inserted the positive thread into one side of the felt ball and the negative thread into the other side making sure they didn’t touch each other. Unfortunately, it sucked all the power from my battery almost immediately. After replacing the battery I tried again but I noticed that when the felt ball was connected it didn’t turn the light off. The light stayed on and then I pressed the felt ball it would turn the light off. This was the opposite effect that I wanted and it would drain my battery very quickly.

Plus class tutorials and instruction