Strategy:  I set out to create a soothing melody necklace that plays a lullaby when you push the pendant. 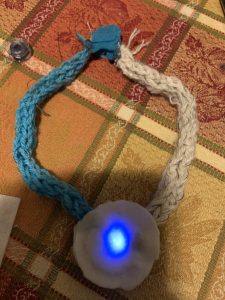 Originally I had planned this for ttc commuters but commuters usually use earphones, reading or other ways to separate themselves from the chaos around them when it comes to transit.

Therefore, after the mix and mingle word exercise I thought why not make a necklace that soothes the soul and those around them. Why not make a soothing lullaby necklace? This wearable would be great for new moms and their newborns when trying to get them to sleep putting both parties at ease.

For first initial steps, I used the french knitting technique followed by the conductive button approach. The front part of the necklace’s medallion would act as a trigger, so when closed the necklace would lit up and play a lullaby through the speaker.

I started sketching out my design and trying to figure out the appropriate circuits: 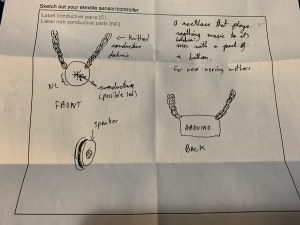 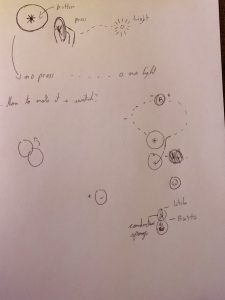 I made two french knitted chains to connect to the battery and LED :

Then I decided to just test my circuit on the left with an LED using a push button technique.

The conductive button technique wasn’t working for me because my circuit based on the picture above, I was clearly connecting my negative (blue french knit chain), with the power side of my power bracelet. However even though that was the case, the design at this stage was messy and I didn’t like it.

So I retreated to using the button technique with just the button clips to complete the circuit.

I’d like to try out other techniques and see where exciting outputs I can make or conduct with this.

Making a pinch sensor for the fingers that activates the light when it touches the medallion could be a next step I’d like to explore.

I would try and make this much neater  incorporate actual sound in the next phase.