During the ideation process in class, I got 8 suggestions from the pile and out of the eight suggestions, the one that stood out for me was “Happy Hat Skiing”. The reason why I liked this idea was that I enjoyed picturing a happy ski hat, especially when it combines knitting and sewing with technology to get some interesting results. This approach of combining past and future skills and techniques is a personally interesting field for exploration.

In the beginning, my idea was to create a hat that predicts the wearer’s mood and reflects it through an LED in the “fluff” at the top of hat. However, I am personally not sold on the idea of technology with mood prediction because of the social impacts it would have. So, eventually, I decided to go with a knitted and sewed hat with LED light in the fluff ball and ON/OFF functions rather than mood prediction.

Knitting was very challenging at the beginning and my first 6 or so attempts failed. However, after repeating a few times, I started to understand knitting and it can be used. I considered the option of knitting the conductive thread through with the yarn, but I wasn’t sure where I wanted to place the thread yet and so I decided to sew the conductive thread in the texture once I’m done knitting. I started with two 20-knot batches of knitted textile, not perfect, but enough to create a rough prototype of the hat by sewing the two batches together with normal thread.

Then I sewed a conductive thread from the LEDs to the positive and negative lines of the tester, which is sewed to the edge of the hat. When the circuit is closed, it lights the LEDs, which are 2 generic yellow LEDs connected using conductive thread to the battery.

I still find challenging to work with textiles since it is a new exploration for me and is still hard for me to visualize, especially in the ideation stage. However, this experiment pushed me to explore my prototype through and learn more about knitting. I would also like to explore different types of techniques and material for knitting because I believe knitting can be a surprisingly useful solution depending on how it is used. 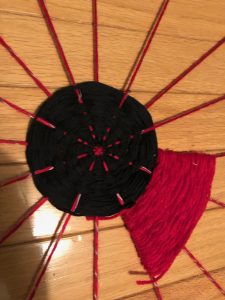 For the next step, I would like to find a better way to close the circuit, perhaps using a button or a sensor to light the LED. Also, I would like to focus more on creating a better prototype of the LED fluff ball because it can be used on its own, added to any hat, to light up through a button or an app in the future. An interesting approach to that would be to explore using felting to create fluff ball that lights under a certain temperature or with rain.

If done nicely, the fluff ball can be a nice addition to any ski or winter hat.