The Smart Belt is the ideal belt for people who always find the time to have a nice meal even on a busy day. When you had too much food, and you fill like you need to make your belt a bit more loose to have that last bite, you don’t need to worry about it anymore. The moment the belt detect a bit of a force stretching it, the belt will automatically add to its length. 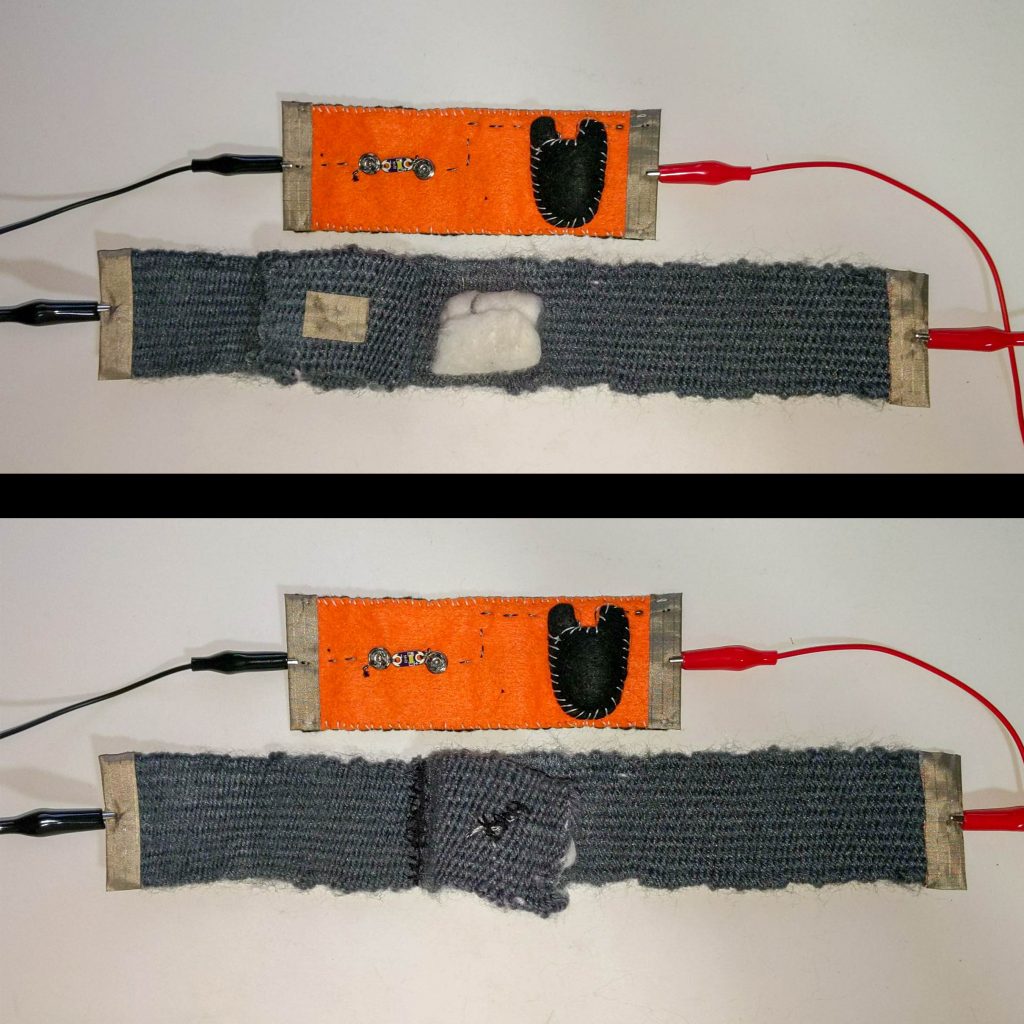 My goal was to design a relaxing belt that is useful for eating. I thought about my personal experience with belts, and one thing that consistently came to my mind was how I wish my belt could sometimes automatically change its size. As a foot lover, I felt that this would be an ideal product.

Initially, I wanted to create a long rectangular shape pompom, so that by pulling on the two sides of it, the resistance of it would decrease and would allow more current to pass through it.

After my first attempt at creating a small pompom, I realized how time-consuming this would be, so I decided to weave the belt. I created two long rectangular shape belt, place them on top of each other with a small amount of overlap, added a pompom between the overlapping area so that if you pull on the two sides of the belt, the pompom will allow current to pass through it allowing the mechanism to be activated.

After the Crazy eights exercise the workshop, I decided to stick with my Smart Belt idea, as it required its own soft tech custom made sensor. As I already mentioned in the strategy section, the initial idea of creating the whole thing using felting seemed too impractical, so the design was changed to a weaved belt, with a small pompom ball as a soft switch, that would be turned on if the two pieces of the belt were pulled upon.

To start the weaving process, I created a loom out of cardboard to help me do so. I added a conductive thread to the three center lines so that I could later use it to conduct electricity to the pompom. Then I took about 50 rounds of Yarn and started the weaving, One key point was that it was challenging to pass the 50 rounds of yarn through the loom every single row, so I ended up putting all the yarn around a small tube and used that to help me speed up the process. I started by going from the bottom and started going over and below from there. Left a small piece of yarn at the beginning to tie it up after the whole loom is done. 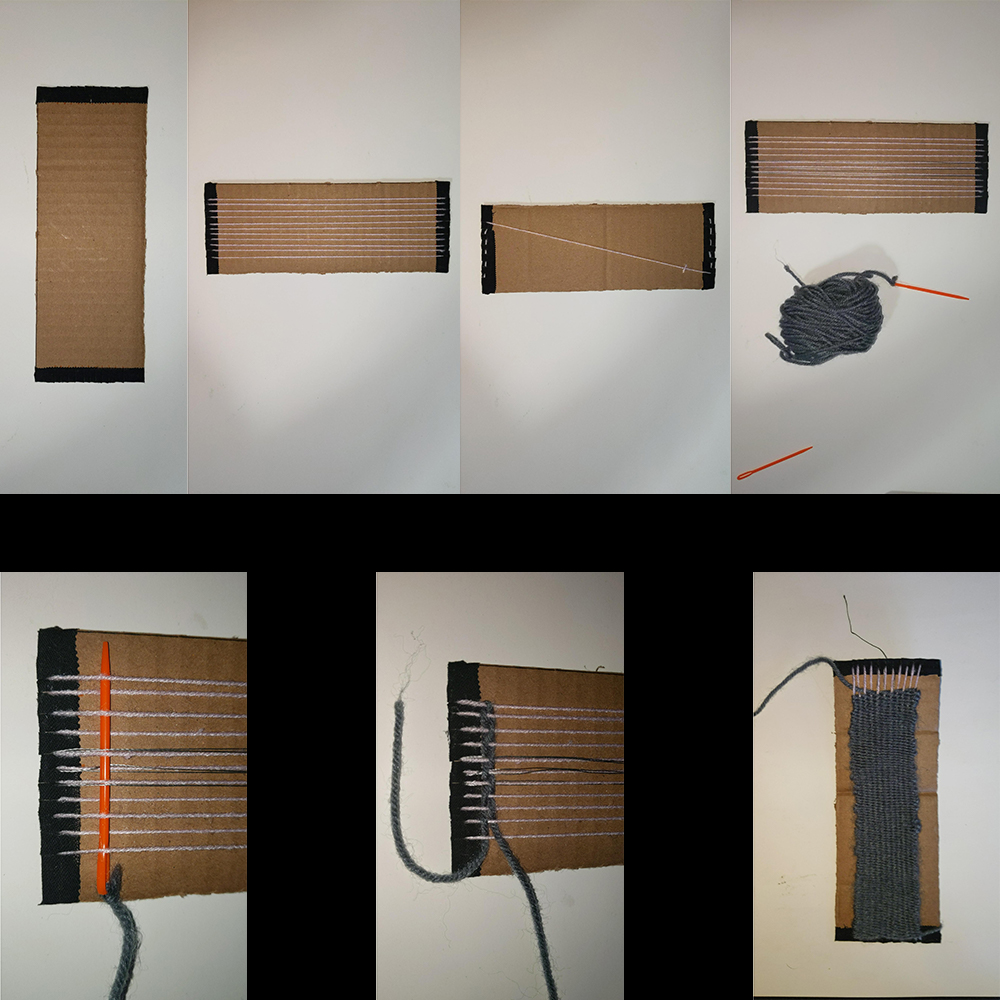 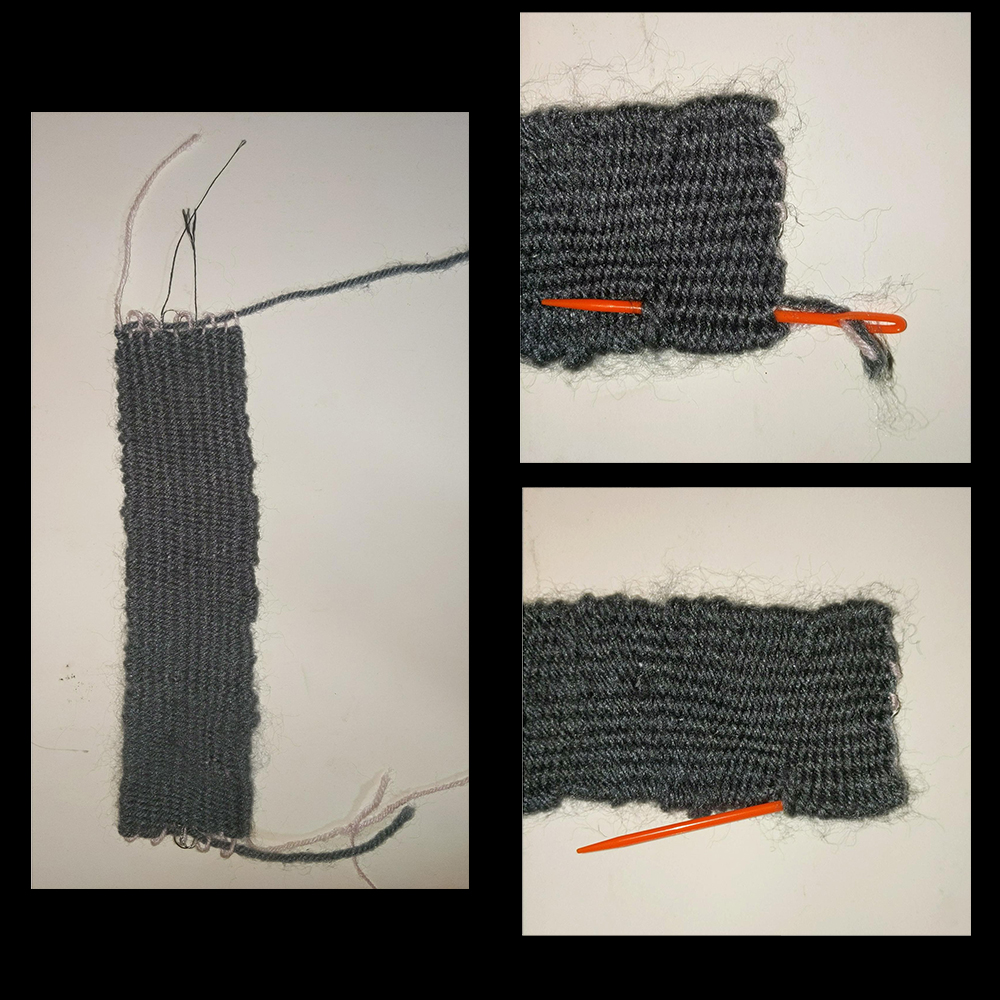 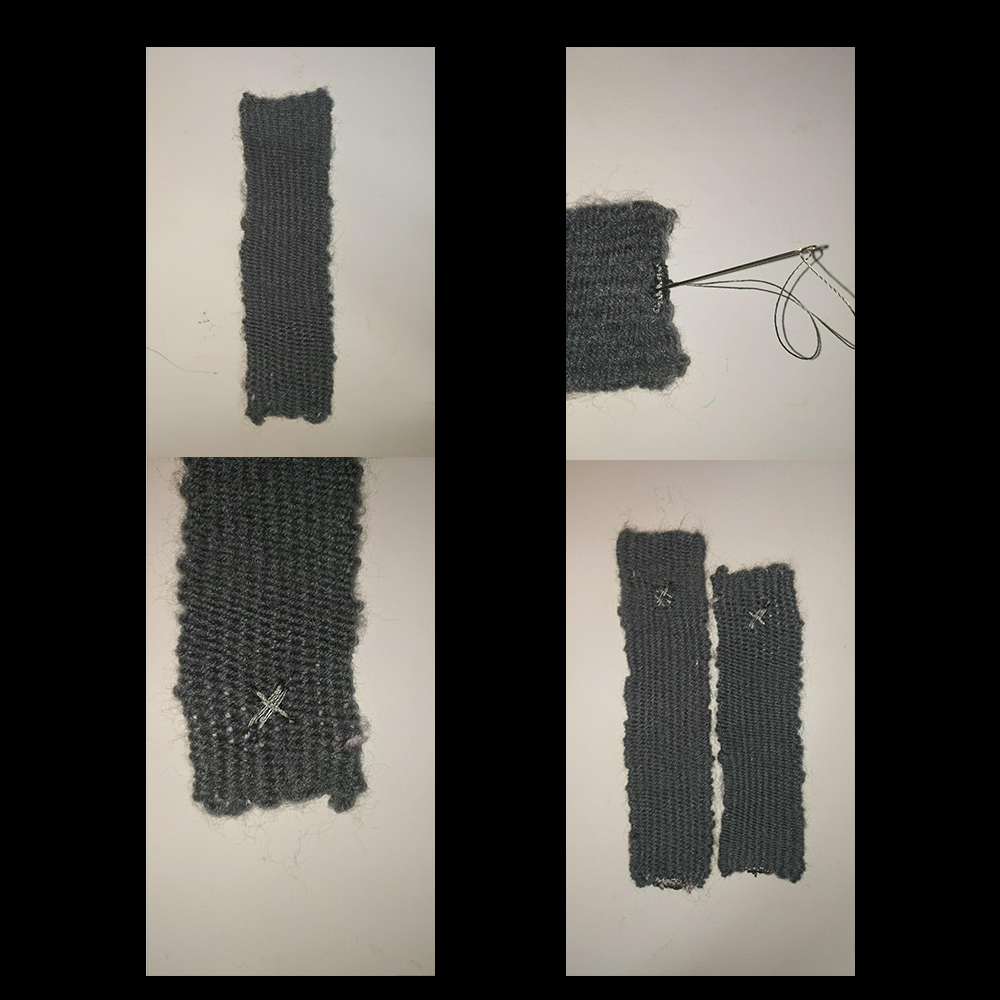 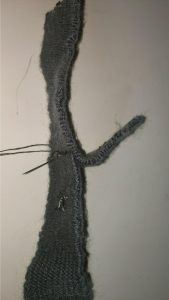 After finishing with the weaving, I started working on the pompom. I cut the conductive fibre into small pieces and used felting to create the small pressure sensor. Every time I did a layer of conductive fibre, I added a layer of non-conductive material. Throughout the whole process, I had to constantly use of the testing tool to make sure the distribution of the conductive material was well done. I ended up with a pompom that was great in one direction but not in another, so I sewed the pompom on to one of the X marked on the belt so that the direction would stay the same. 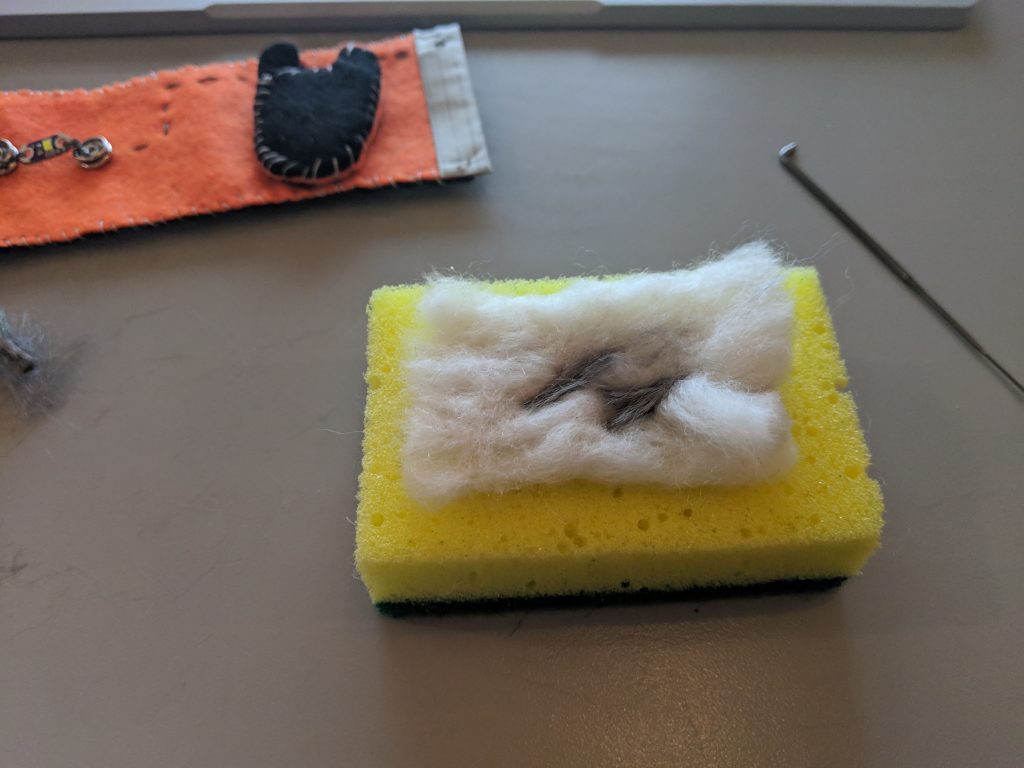 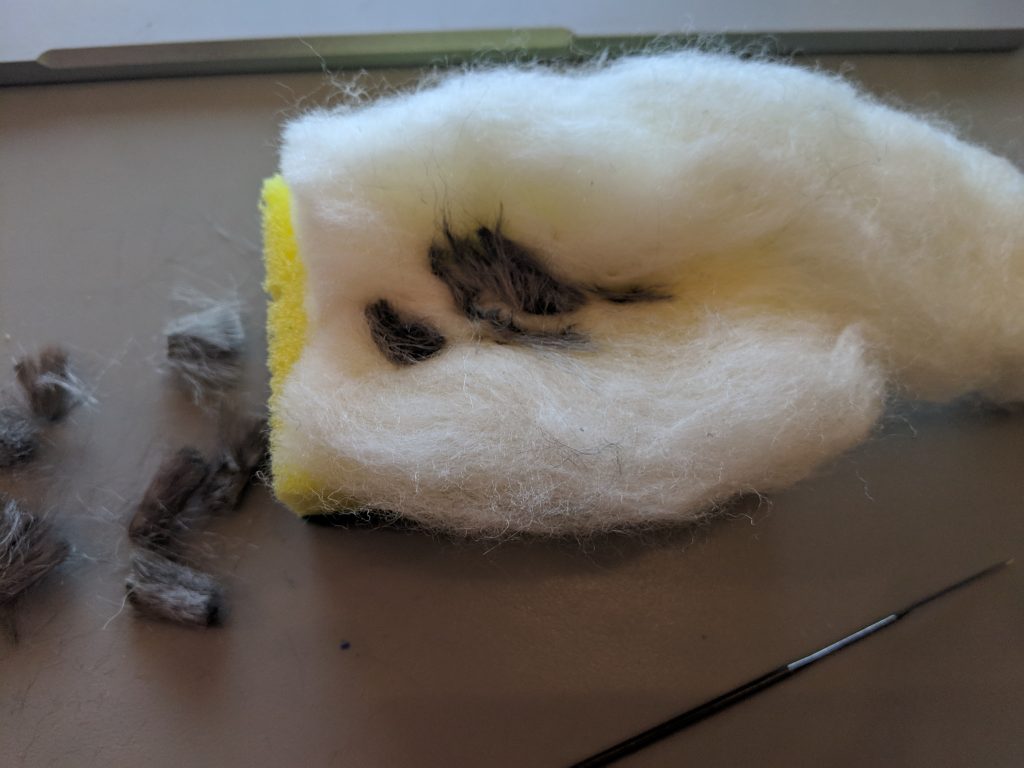 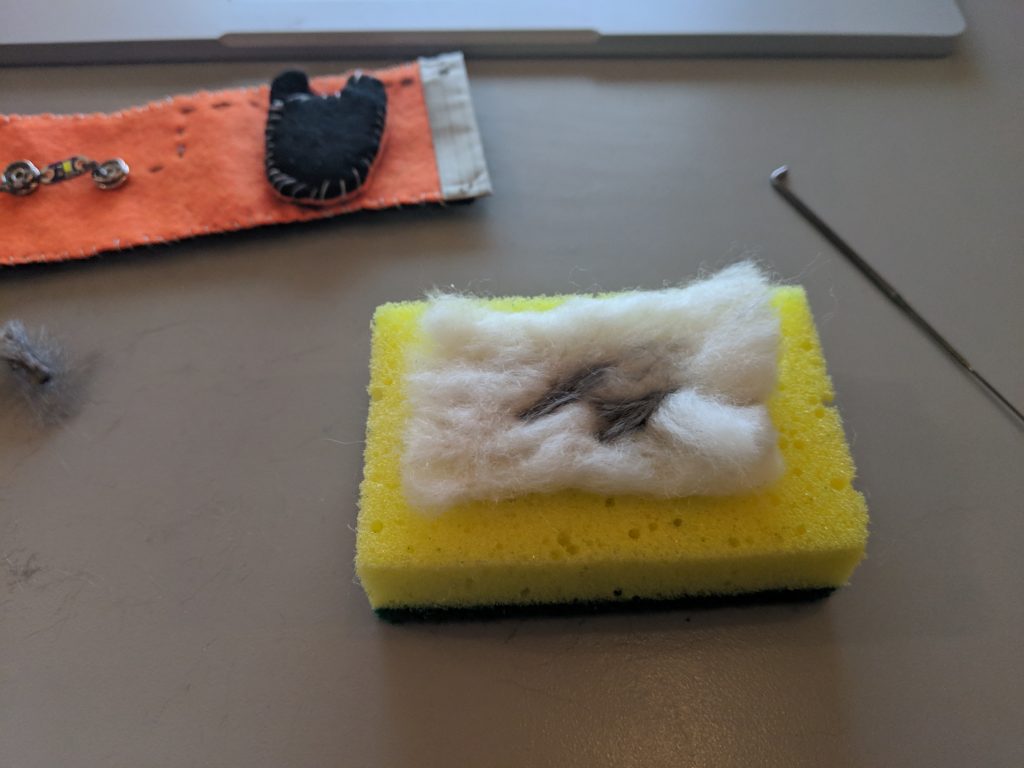 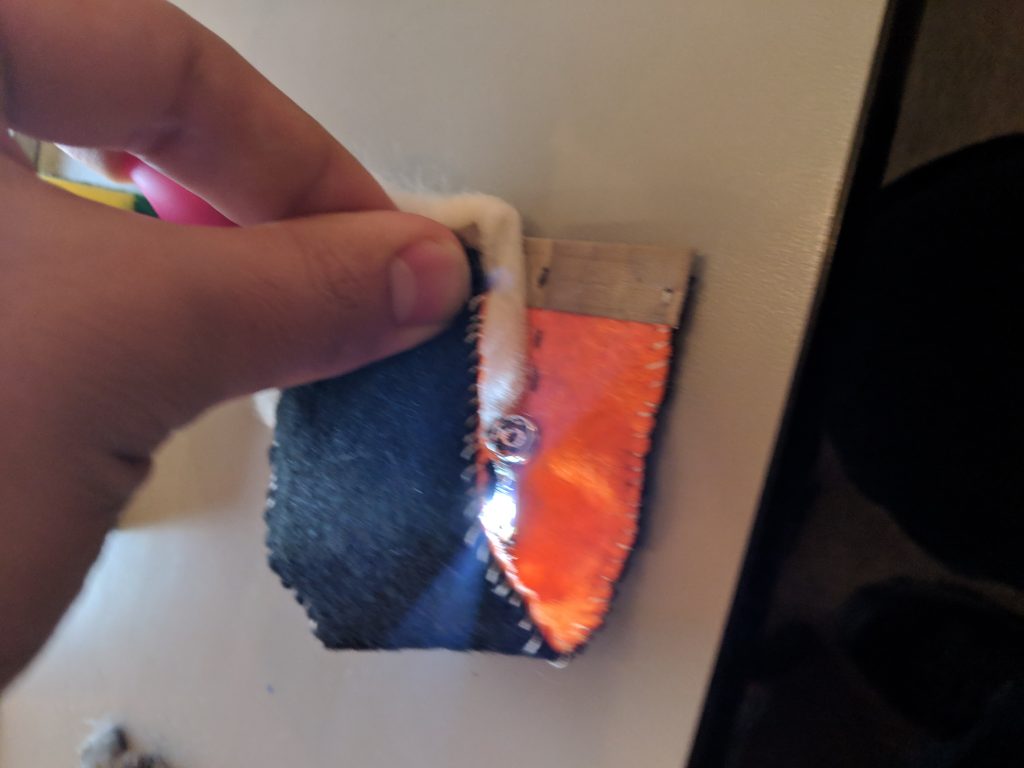 I finally did some testing by pulling the belt and seeing if it would turn the LED on the testing tool on.

Insights: What knowledge did you gain from your prototype/ experiment? Don’t just include successes, your failures along the way are useful insights as well. How could you apply this knowledge?

Weaving takes a lot of time, especially if you require long pieces. Having to pass a long piece of yarn every time through the loom is very difficult, especially when you need to make sure that no knots are being made. I did end up using a small roll of paper as the place holder for the yarn and passed that through the loom. Also, I initially made sure my loom was very flat and straight, but later on realized that the fact that I could fold my loom was very helpful especially when I had to pass the big roll of yarn through every single line. When you get the flow of the process, it gets much faster, but it is very difficult to make sure every line is exactly the same length. If you push the yarns too much if will narrow your piece and makes it more difficult to weave. To make sure every line stays the same size you need to push the yarn only enough to make sure everything is tightened together without ruining the rest fo your loom.

The pressure sensor pompom requires a lot of testing. Even though I did a lot of testing while I was felting, it was still not enough. I only tested the pompom in one direction, so I ended up with a pompom that only worked in direction. I would recommend that you make sure you test the pompom in every direction and that you don’t use long pieces of conductive fibre as that would reduce the quality of the pompom and change it to a simple switch.

I used the Weaving Loom tutorial to create my own cardboard loom.

After finishing the design, I realized that the pressure sensor conenction was too big, and I wouldn’t use it as belt myself. For my next step, I would try to add the sensor into the belt like the figure below: