The task for this week’s project was to develop a ‘body-centric’ technology that used resistive material.

During class, a classmate and I tested out five different resistive materials using both an analog multimeter and an Arduino programmed to receive analog voltage input with values within the range of 0-1023. In some cases we used alligator clips directly on the material, and in others we wedged the resistive material between two strips of conductive material attached to neoprene, to allow us to press into a soft material instead of, especially in the case of the plastic sheets, material without much ‘give’. 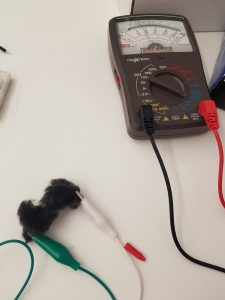 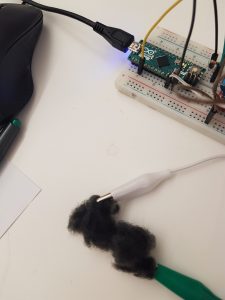 It was interesting to compare readings with different testing methods on the materials we were provided. Sometimes we stretched the materials out, sometimes we replaced the resistors used in the arduino testing with other resistive values. The resistive values of the materials tended to reduce when in tension or compression; the closer the fibers (and particles in the case of the plastics) were to each other, the less resistance they exhibited. Similarly, voltage readings with the arduino were higher when there was less travel distance between the two clips attached to the materials. 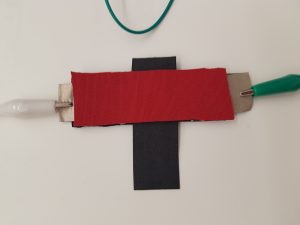 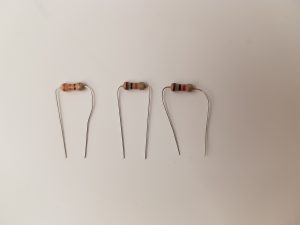 (Above: investigative tests of the material properties of several resistive materials)

For this iteration, I decided to to try crochet with the help of my girlfriend. In my last exercise I learned to use some crochet techniques in order to bind two edges of knitted material together. From what I’ve heard, the process of crochet is faster than knitting with practice which appealed to me. The catch was that the process was slightly more nuanced; to create the knots, the crochet hook  must be weaved in and out of the material in more steps than the basic knit. The hook of the tool makes this process relatively painless though, and in a matter of minutes it felt as natural as the knitting process.

What resulted was a crochet cylinder roughly large enough for my thumb. I attached the stretchy resistive fabric with non-conductive thread in a manner that left the material in tension, then sewed conductive thread to the short edges of the strip, leaving two exposed strands at the bottom for the purposes of circuitry. Similar to the previous blog post, I wanted to explore handheld activation mechanisms, this time with the sensitivity of an analog input to Arduino. 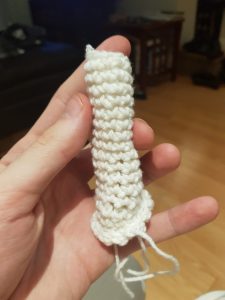 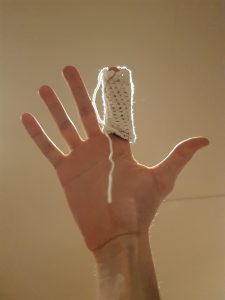 I hooked up the device to an arduino programmed to take analog read input and feed it through the USB serial connection to the computer for display. I tried several on hand resistors to see which one would be most effective for the task; none of them were ‘amazing’, but the 4.7 ohm resistor paired with the arduino’s 5V power supply provided clear differences between the device being flexed and relaxed.

Next Steps: Further calibrate the resistance using the multimeter to get the largest sensitivity of data! And make more interesting devices. 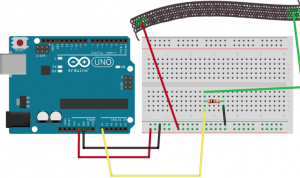 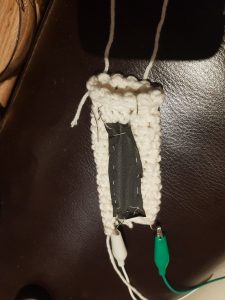 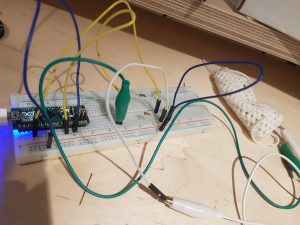