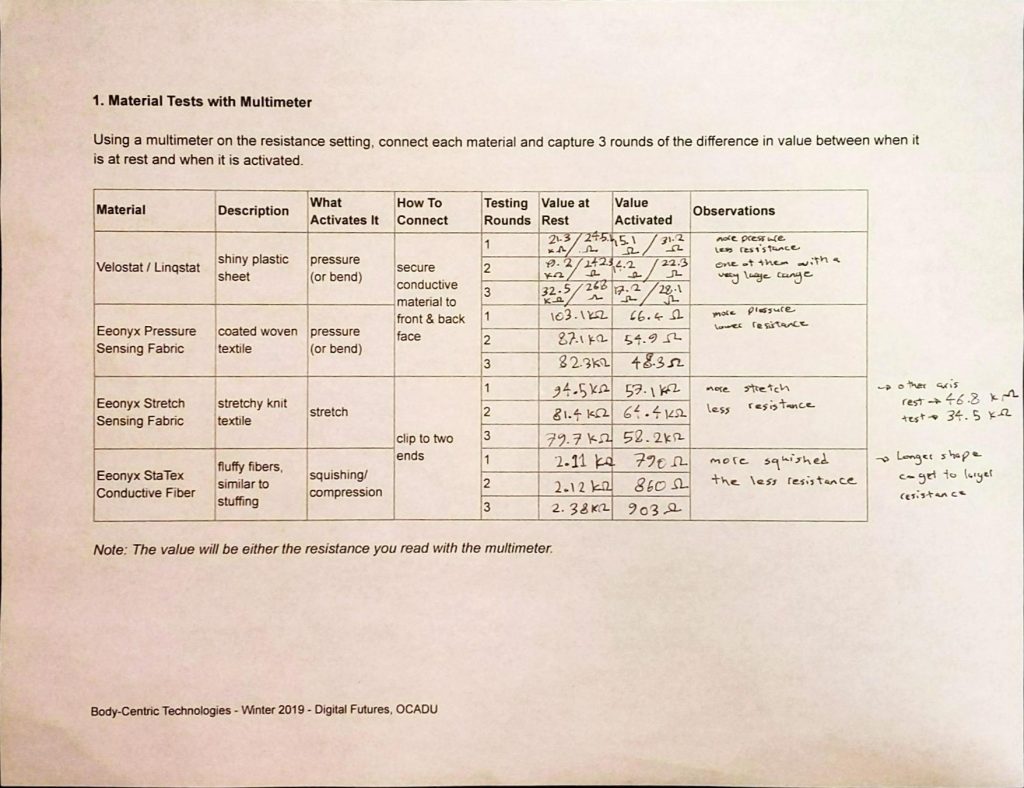 To find consistent data, we decided to follow the same procedure for all the materials being tested. Every material’s resistance was written down as they were connected to the ohm meter. We would then activate the axes and read the new values on the ohm meter. After activation, we would allow 30 seconds to the material to revert to its original state, where we would read the next resting value and repeat the procedure until we received three readings for each material.

For the Econyx Stretch Sensing Fabric and Eeonyx StaTex Conductive Fiber, we were able to directly connect them to the ohm meter using alligator clips, whereas, for the Velostat and the Eeonyx Pressure Sensing Fabric, we had to use the Sandwich technique to read the measurements. To do that we used two pieces of fabric with Back glued Conductive fabric. After sewing the two edge of the parts together, we slipped in the material that we wanted to test and connect the conductive fabrics to the ohm meter using alligator clips. We cut the testing matorral bigger than the testing equipment so that it would prevent from any accidental short connection. 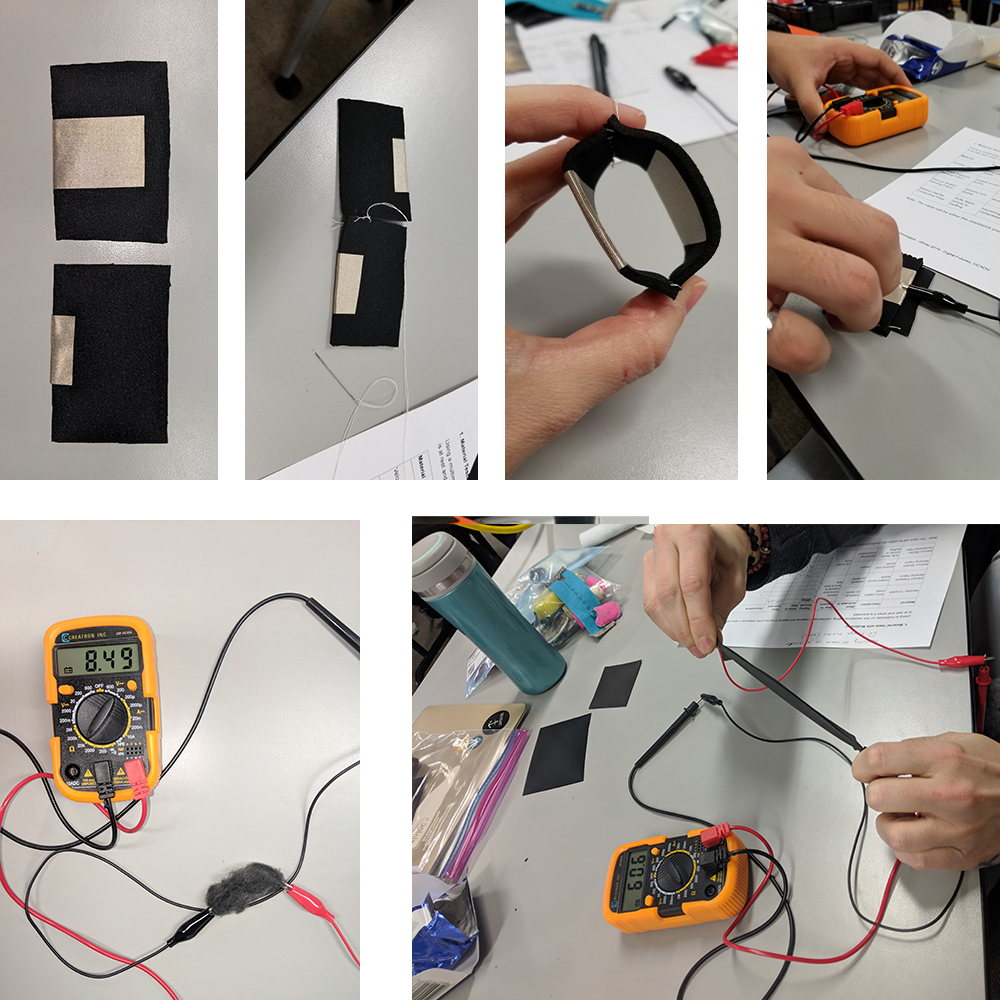 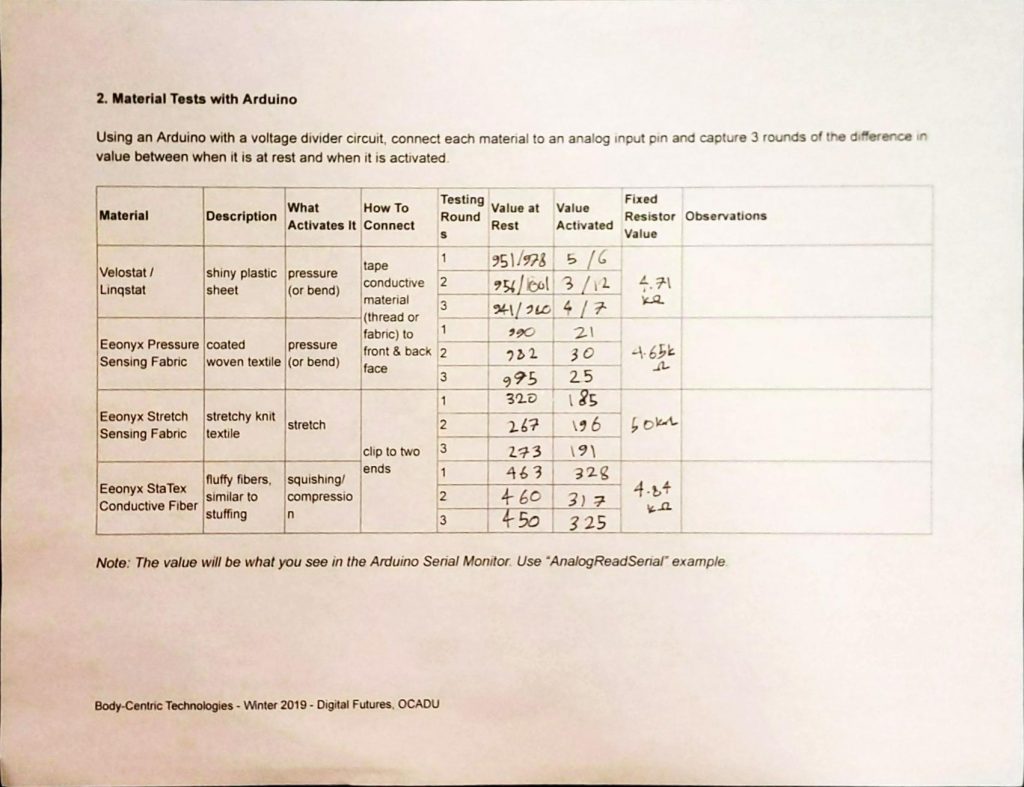 To read the values using an Arduino, we made a voltage divider circuit, using the test materials as the second resistor in the circuit and running Arduino’s Analogue Read Example to read the measurements.

We initially used a variable resistor for the other resistor, adjusted to give us the smallest reading possible in Arduino at the resting position, but to confirm the numbers, we also ran all the materials using a 50 Ohm resistor (the average of the resistance from part 1 of the workshop) as well and observed the same range of results as the test with the variable resistor.

We followed the same testing structure as testing with a multimeter, giving 30 seconds between each run for the material to go back to its original shape. 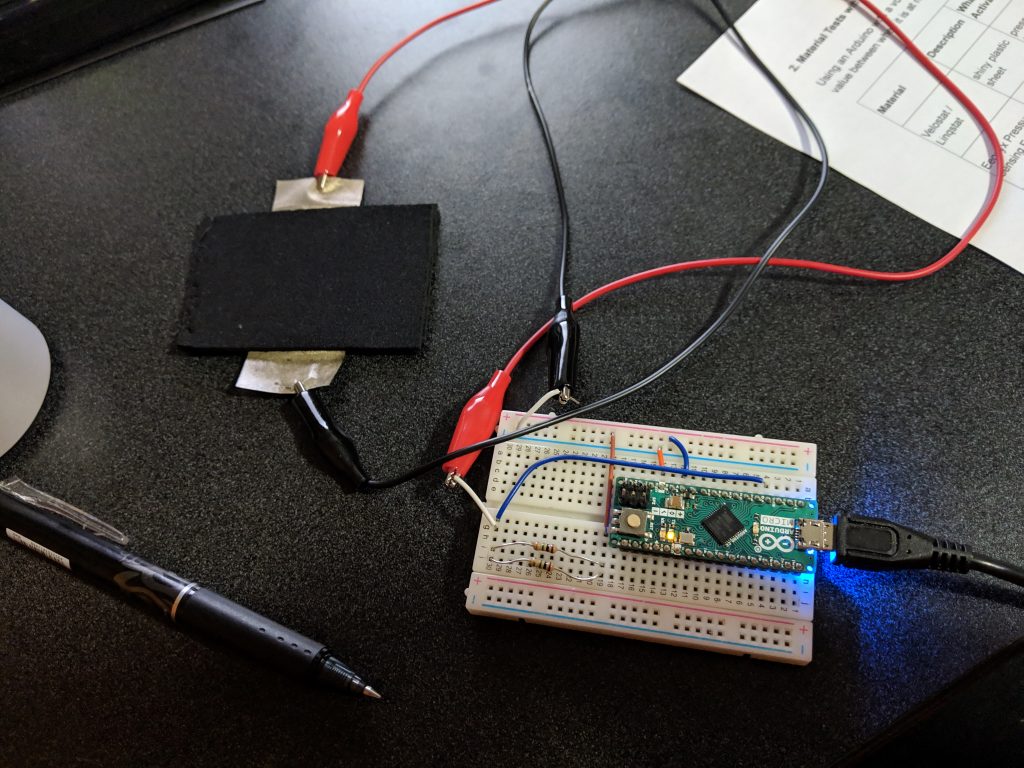 The Velostat has a great range of resistance ( from 20K Ohm to 20 ) giving the broadest range of readings from the Arduino. Also due to its shape, it can be easily added to any design of any size and be used as a pressure sensor.

This by far was the most fascinating sensor. We did test it on both of its axis, and it returned the same resistance. It stretches a lot and provides you with a functional difference in the resistance. It can be easily added to any design and be used as a stretch sensor.

This is a unique material because of its form. It can be easily used to fill an object up with and be used as a sensor. It has an excellent range of resistance but takes a very long time to recover after being activated. It also might never turn back to its original shape causing the resistance values to change quite a lot between different runs.

Part 3: Build Your Own Sensor

here are the steps to build the sensors: 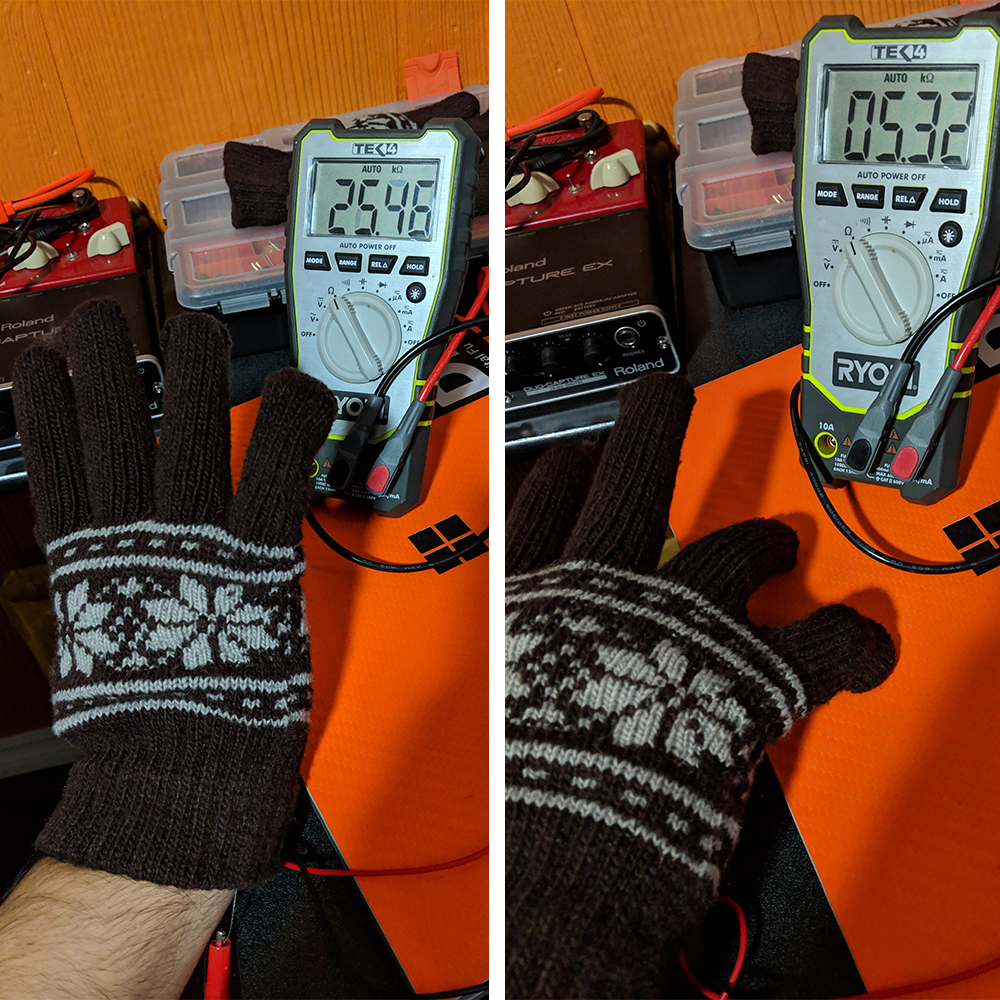 It was very difficult to connect the sensors to the gloves and taking care of the wire connections. During the testing, the sensor did sometimes read out of range values because of short circuits in the wires. Another difficulty was to correctly position the sensors in the gloves so that when your hand is in the glove, the sensor would stay at their resting status.

The next step would be to come up with smaller sensors so that it would be easier to install them. I would also create a fix path for wires to reduce the chances of short circuits. For the final touch, I would connect the 4 sensors to a micro controller and set it up to control whatever device that you would like.