My goal was to design a watch which can help to relax a person who wants to bungee jump. This watch will be worn on a hand (especially on the left hand) and squeezed to be relaxed a little bit.

My keywords were: A watch- Bungee jumping – Nervously

It is an activity that involves jumping from a tall structure while connected to a large elastic cord. The tall structure is usually a fixed object, such as a building, bridge or crane. When the person jumps, the cord stretches and the jumper flies upwards again as the cord recoils and continues to oscillate up and down until all the kinetic energy is dissipated.

Although it looks like fun, it is also a very difficult activity to accomplish- especially for those who have fear of heights. Some of them who are getting ready to jump, cannot overcome their anxiety and turn back to their safety zones and step onto the ground again.

I wanted to help those who are getting ready to jump by designing a watch/hand band. It is very simple, but maybe an effective product to relax people and release their nerves.

I wanted to design a product for hands, especially for the left hand. I knew that there are acupressure points on hands (including fingers and palms) to relax someone. I found that left palm includes heart, lungs, stomach, and adrenal (see image 1). 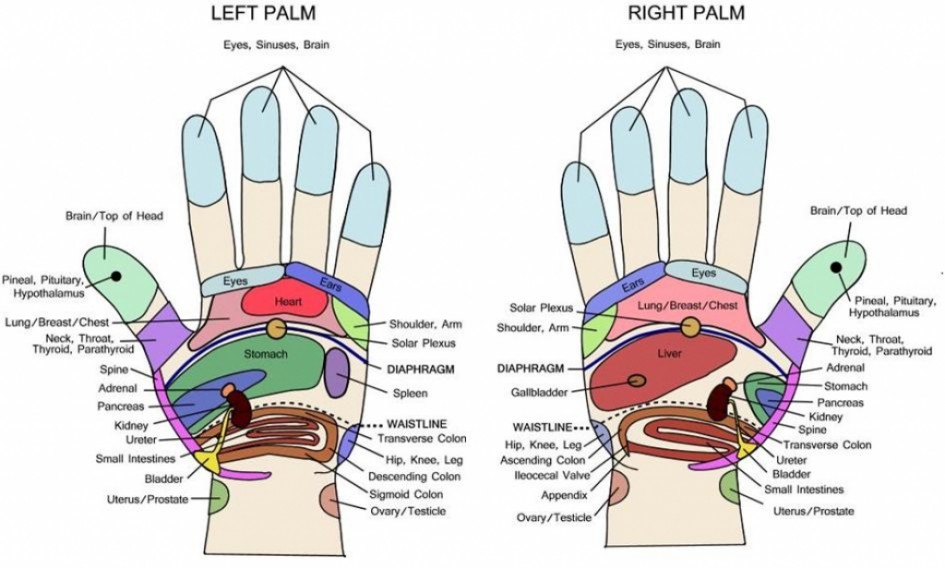 A user of this product may put some pressure over there areas in the palm by squeezing the watch/hand band. If s/he presses and complete the circuit, a led lights up. S/he may play with it by lights it up and relaxes; or if s/he is very nervous s/he can squeeze it hard that it just lights up constantly. S/he also may not need to use it, if s/he feels fine about jumping of is concentrated on jumping.

Even if there were no acupressure points in palms, we feel better if we hold something in our hands, squeezing our hands, or shaking them. I am giving an interactive tool to these people to hold on, taking it with their journey with.

This watch/band is worn on hands and covers the palm, back of the hand. It is slotted over the thumb and wrapped around the hand.  If the two ends of the band touch each other circuit completes and the led lights up. It is activated in the palm. The user has to squeeze these ends in order to make them touch each other. You can watch the video here about its usage and how it works. 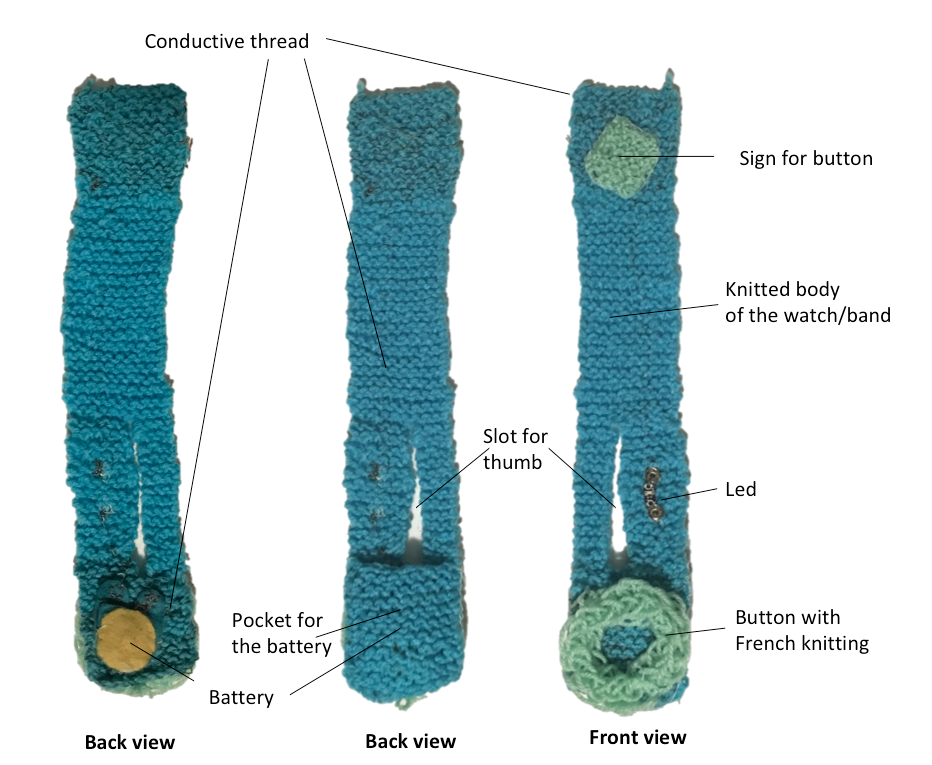 The slot and bands are wide and long enough to adjust the product to users’ various hand sizes. I decided the dimensions considering in hand size and comfort of usage.  You can see the dimensions below. 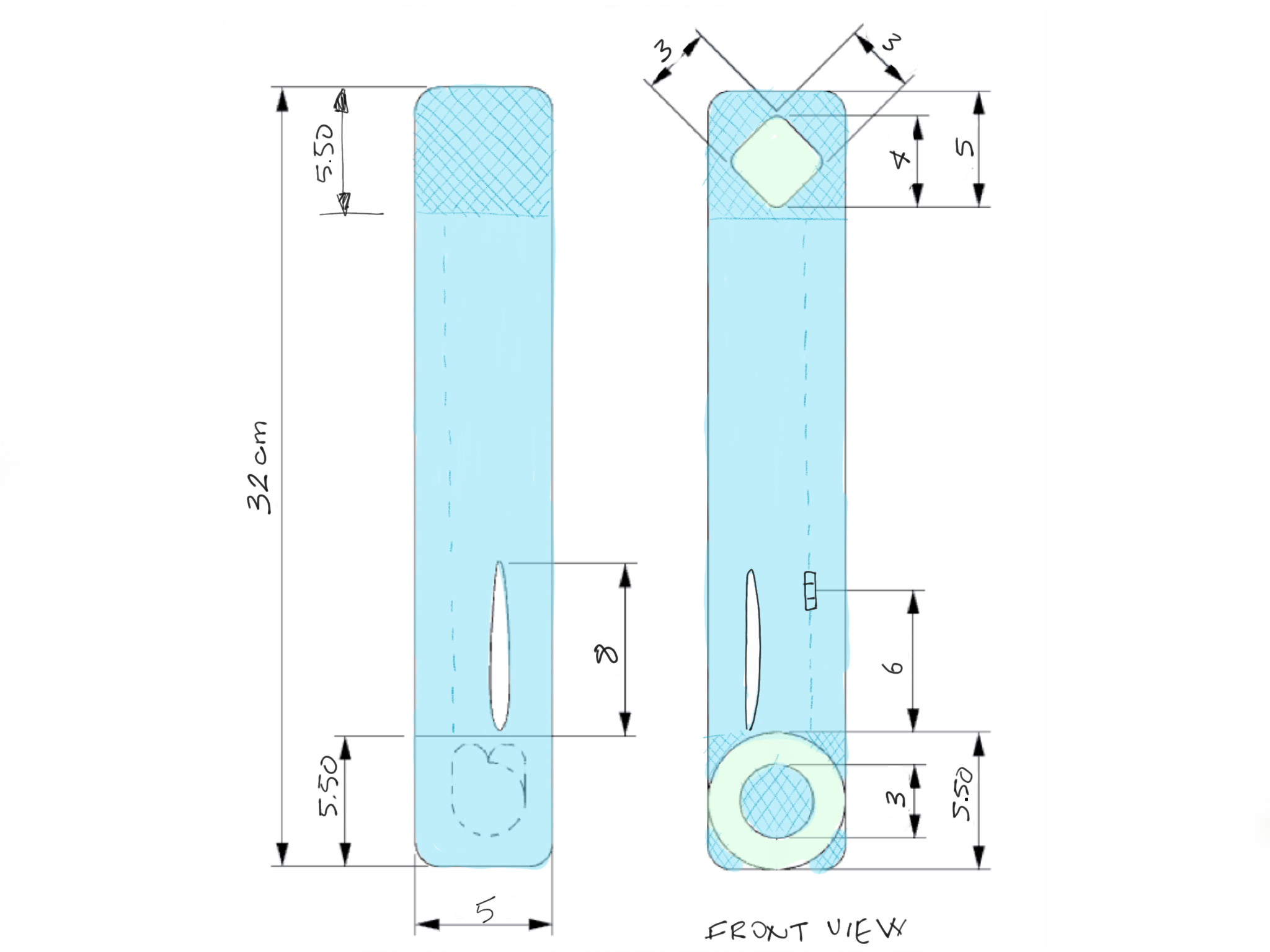 A battery is also located in the palm and it is covered with another knitted layer. Led is located the outer surface of the band, where it can be seen easily. You can see the led and how the watch is worn on a hand below. 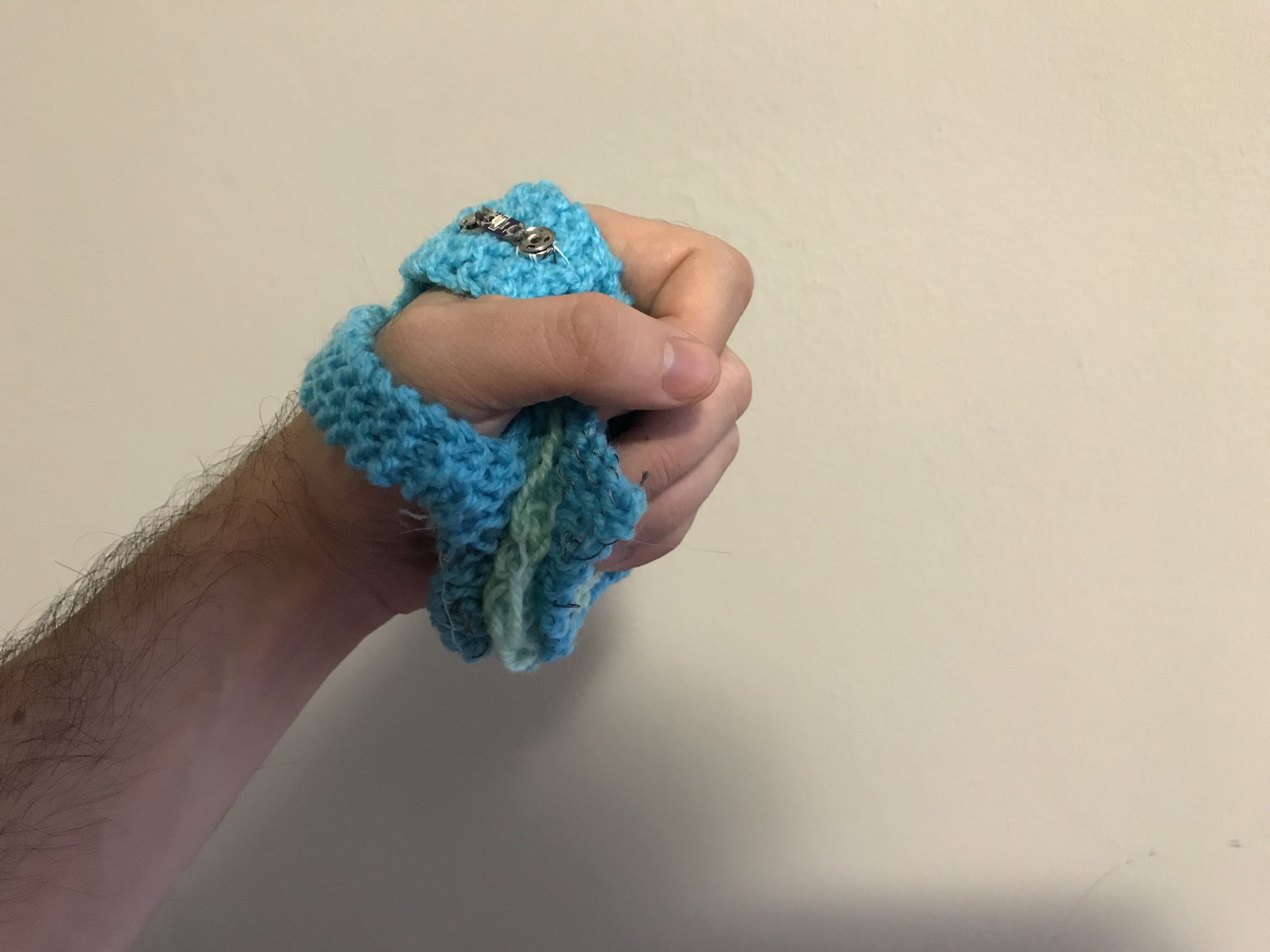 Image 4: How it is worn and used

Conclusion: A watch/hand band may be used to relax someone who wants to bungee jump.

I started my project with sketches. You can see the initial sketches of my e-textile sensor/controllers. 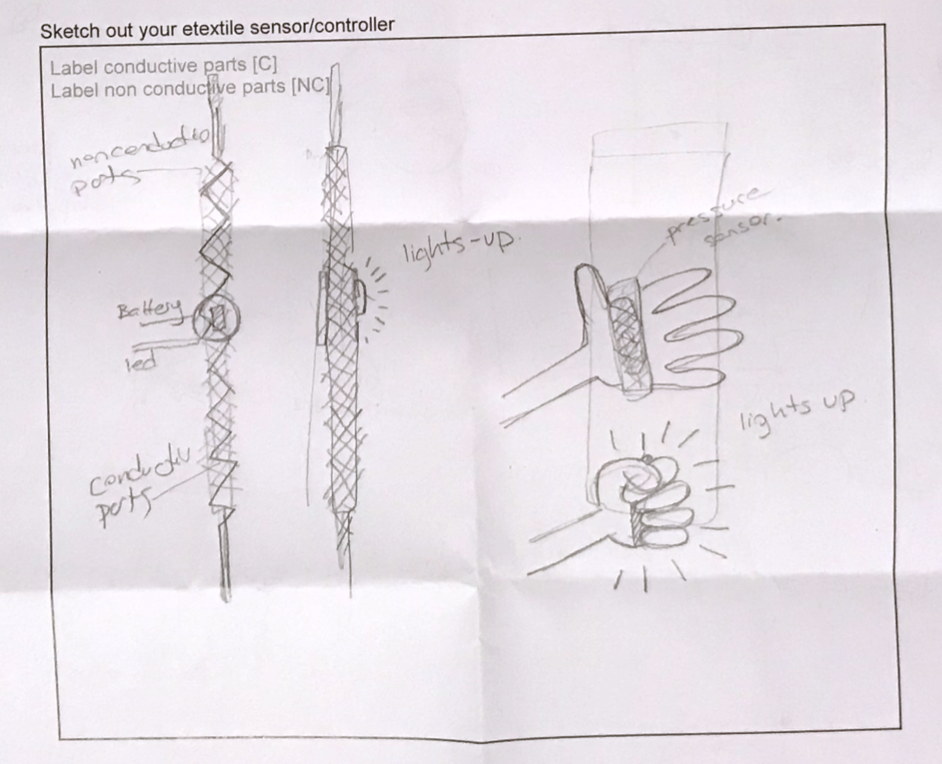 Two techniques I chose are French knitting and knitting. 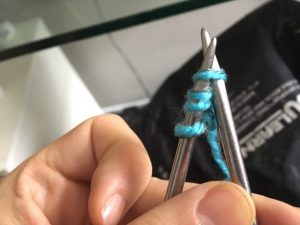 Starting the first loop. After a few trials, I decided to make 10 loops in a row. I also added conductive thread into the yarn. 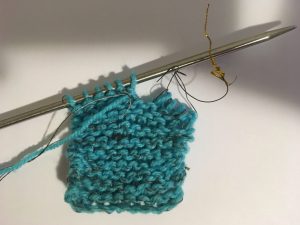 After reaching a square shape, I divided the loops into two groups. One group included six and other group included four loops. I tied the four loops with a wire not to lose them. I also stop using conductive thread at that step. Then, I knitted the six loops to individual size. 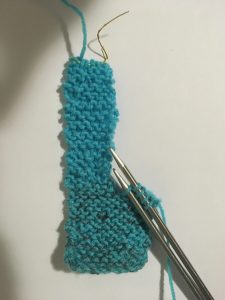 I tied the six loops with a wire and started knitting four loops. I knitted them till reaching the same length with 6 loops. 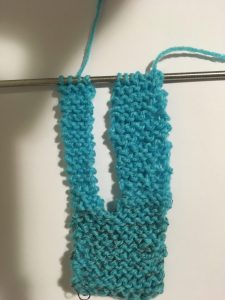 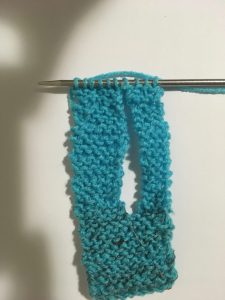 I started knitting two groups together and combined the rows together. 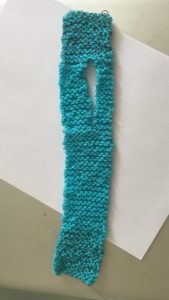 I added conductive thread into the yard again and knitted the other end of the band with it. 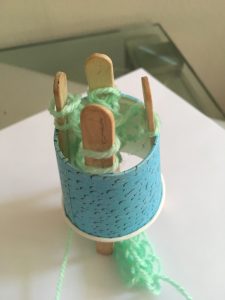 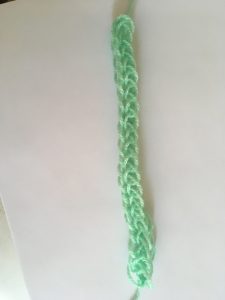 I knitted French knitting till I have enough length of it to make a button. 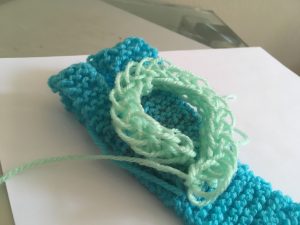 I create a circle on the one of the end of the cord. 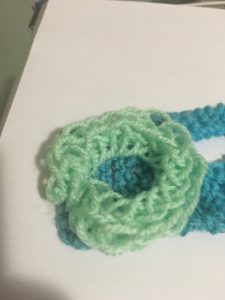 I saw the circular French knitting on to the body with a regular thread. 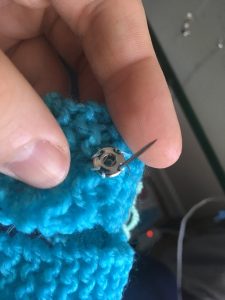 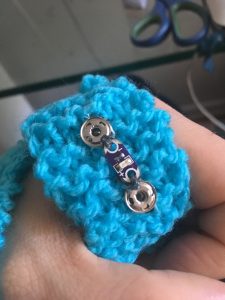 I sewed snaps for the LED. 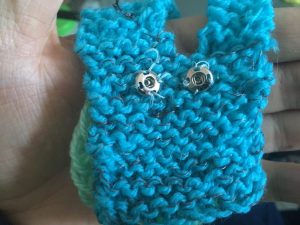 I disconnected the snaps from each other and connected them with the rest of the circuit. 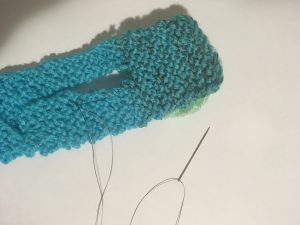 I also connected two ends of the watch/band with the conductive thread. 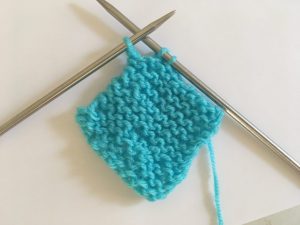 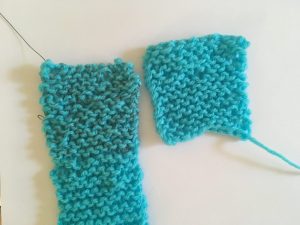 I knitted another square piece to cover the battery and create another layer between palm and the device. I also knitted and sewed a small piece onto the end of the band where fingers are located. I thought it can be a sign of the button and shows the real button underneath.

Information sources: I used this video to learn how to end knitting of the last row.