This project was to use material handed to us during class to make a sensor which is in a way related to the body. We started out by testing reading using a multimeter

I tested the sensor out with my classmates Olivia and Mazin. We realized that the materials were highly sensitive and that we did not actually have big enough resistors in terms of resistance which could be used for testing with the arduino. This testing helped with the general understanding of the project and different types of materials available for building soft sensors.

The assignment was to build a sensor that was “body’ centric in a way. My initial understanding was built by testing out the resistive materials. I decided to use the Velostat and Linquustat. I started by trying to understand the idea of something that was “ body centric”. My research included using a design thinking approach to the question of building a sensor.

During our class, kate had mentioned paying attention to the way we use our bodies. This got me thinking about the way I use my body in particular. Including the kind of things I wear. Which parts of the body do I apply the most pressure to?

The one of the interesting question that arose during my research was about the weather I was designing for One body or two bodies. This was a surprising insight because it showed the subtle ways that we not only interact with our own bodies but also many more bodies.

Kate has bought this really nice mat material which was basically the puzzle mats which usually  was also an interesting material itself to build a sensor.

I first cut out a triangle shape piece because I started out out by imaging a rough idea of building a napping pad (for the on the move nap).

I used this information I had collected in helping me to formulate what I wanted to build. I was going to the Eonyx Velostat material and the green mat. I decided this would be a great time to do a test with the testing sensor to make sure that the basic functionality is there to scale up to build the actual sensor.

I uploaded the serial input Output code from the examples and I got a good range of numbers for the the sensor value and output value. A good enough range helps with mapping of the sensor value to something else. In my case I had decided to use the a physical output like the LED strip. Through this process I had set myself some constraints in which I should ideate around.

I used the code from https://randomnerdtutorials.com/guide-for-ws2812b-addressable-rgb-led-strip-with-arduino/

as a guiding post to light the Fast led. This also involves downloading the fast.h library to the code.

After I had unpacked my initial learnings, I proceeded by getting back to the drawing board to brainstorming sensor ideas.

After a bit brainstorming, using my constraints I decided to build a “Thinking sensor” . This was a finding I had collected in my initial phase of “understand”. I realised one of the ways in which I use my body is by always leaning on my hands. From this idea I wanted to do kind of a play on the idea of the thinking man. 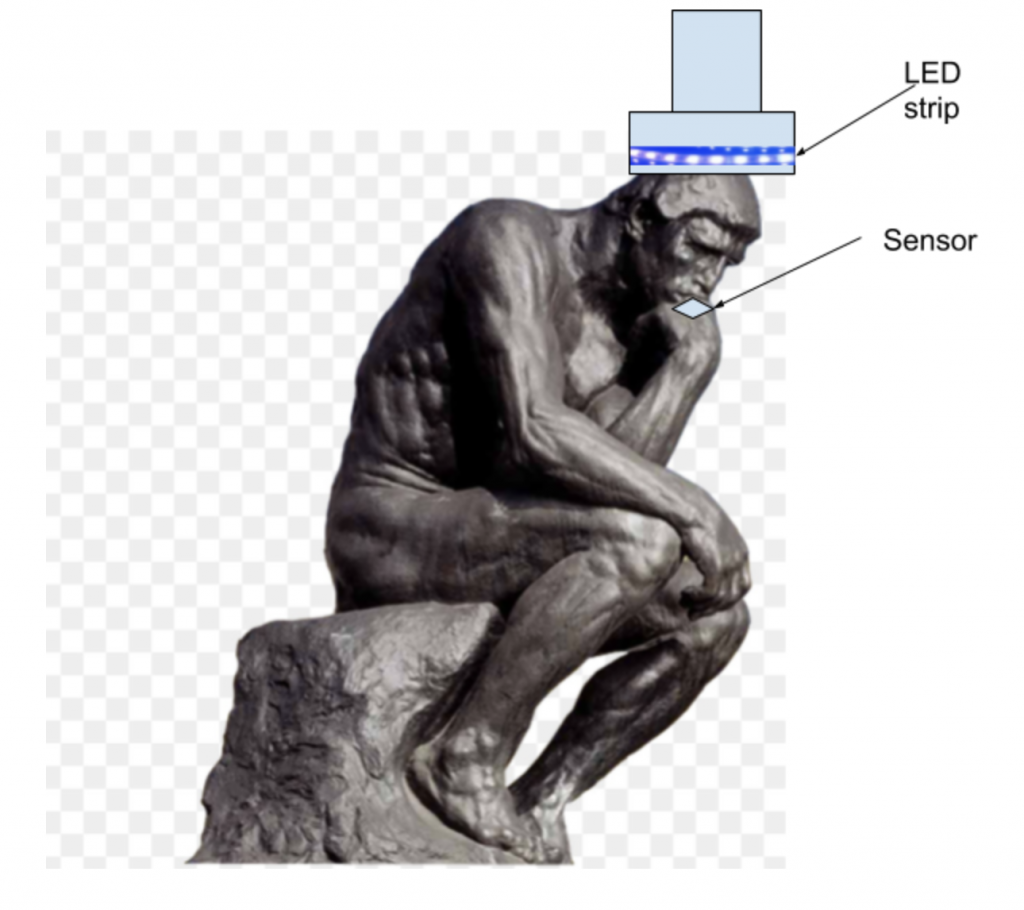 I started building out by using the same code as above and then running a test by lighting the LED strip using the test sensor.

After I built the sensor, due to the high ranges which were affected by the thickness of the sensor did not really help in the coding the sensor to switch the LED on and off. I would recommend using thinner materials

I used this opportunity to kind of have fun with the exercise. I found it interesting to try out these materials to understand the novel and surprising ways in which we use our bodies. Our bodies are using covered in soft materials, and the potential to integrate these materials into our everyday has great potential.

Using resistors with values of over 10k.

Trying out different outputs such as sounds or even vibration motors.