This experiment I wanted to create a fabric sensor that could track a ‘swaying’ motion. I really like the idea of creating electronic sensors with house hold items and I decided to continue in that fashion. I will be creating two strands of beads with a metal bead at the end of each strand. When the metal beads touch it will complete the circuit and turn on the LED. When the sensor is completed, I want to create a dog collar that will track the motion of a beloved pet dog. After we have a LED lighting successfully, the next stage will be to hook the sensor up to an Arduino and track the collars swaying motion through the serial monitor.

Step 2: Beading
Luckily, I didn’t need to buy anything for this experiment since I had a bag of plastic beads from some kids crafts and the rest of the materials I already had in my kit. I sorted out a nice variety of beads I wanted to use and set them aside. I had about 10 beads for each strand. I don’t have any medal beads so I decided to make some by wrapping wire around a pair of needle nose pliers until I started to see a nice looking ball. Then I make a loop with the end of the wire and tucked the end of the wire into the ball to make a loop. I’ll use the loop to connect the wire bead to the conductive thread later.

From there, I added a piece of conductive thread to the metal bead making sure to double up the thread so it will hold the current of electricity better. Then I started started stringing the beads on to the conductive thread and stitched the excess thread into a piece of felt sheet. One strand was stitched to the right and the other was stitched to the left. I added and LED light and stitched a connection from the positive to the right side and the negative to the left side. 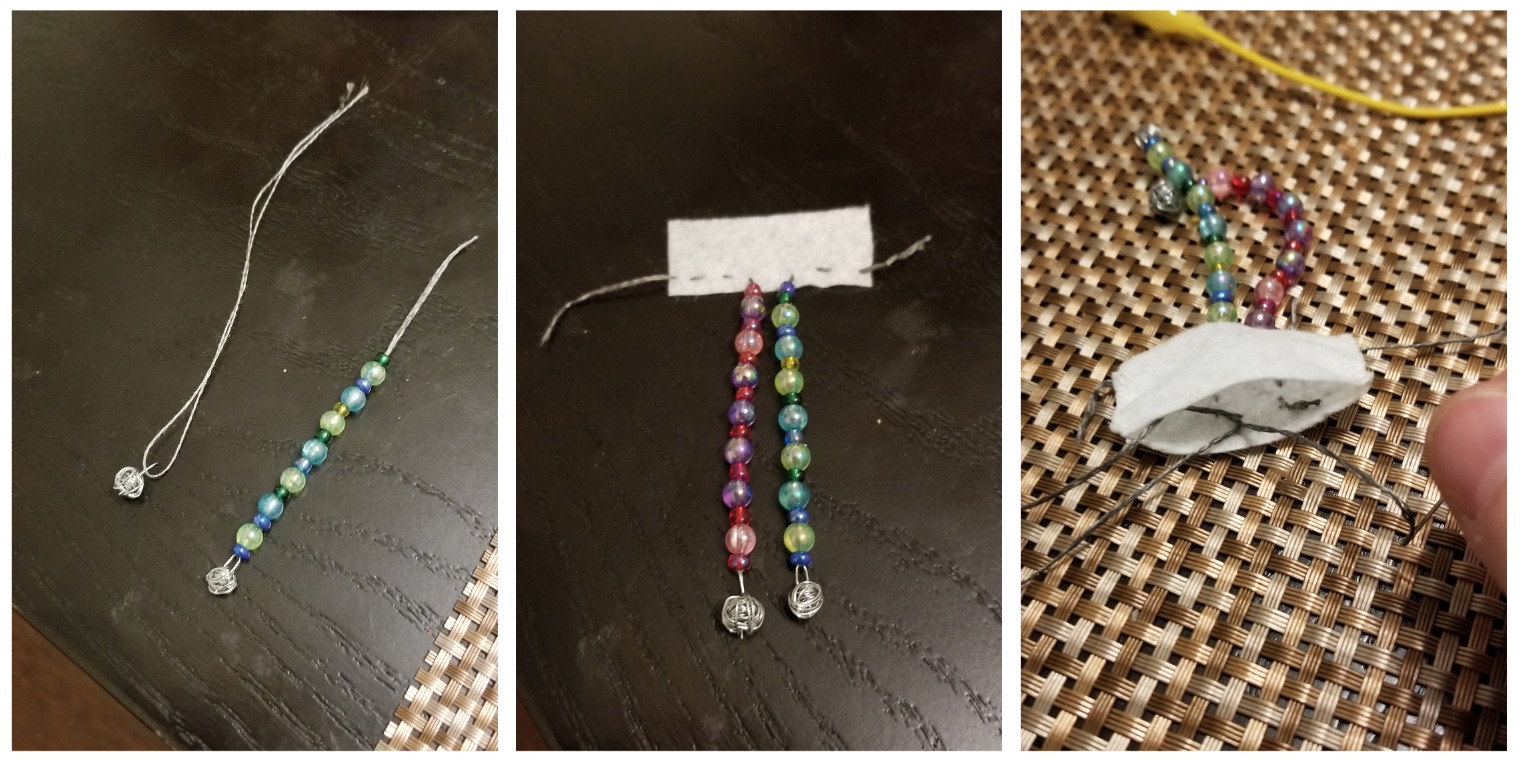 Step 3: Testing circuit
When I plugged in the LED came on immediately so I knew I did something wrong. The LED shouldn’t go on until the metal beads touched and complete the circuit but it looks like the circuit was already completed and when the 2 beads touched it would short out the LED and drain the battery. I had to go back to the drawing board and see where I went wrong. 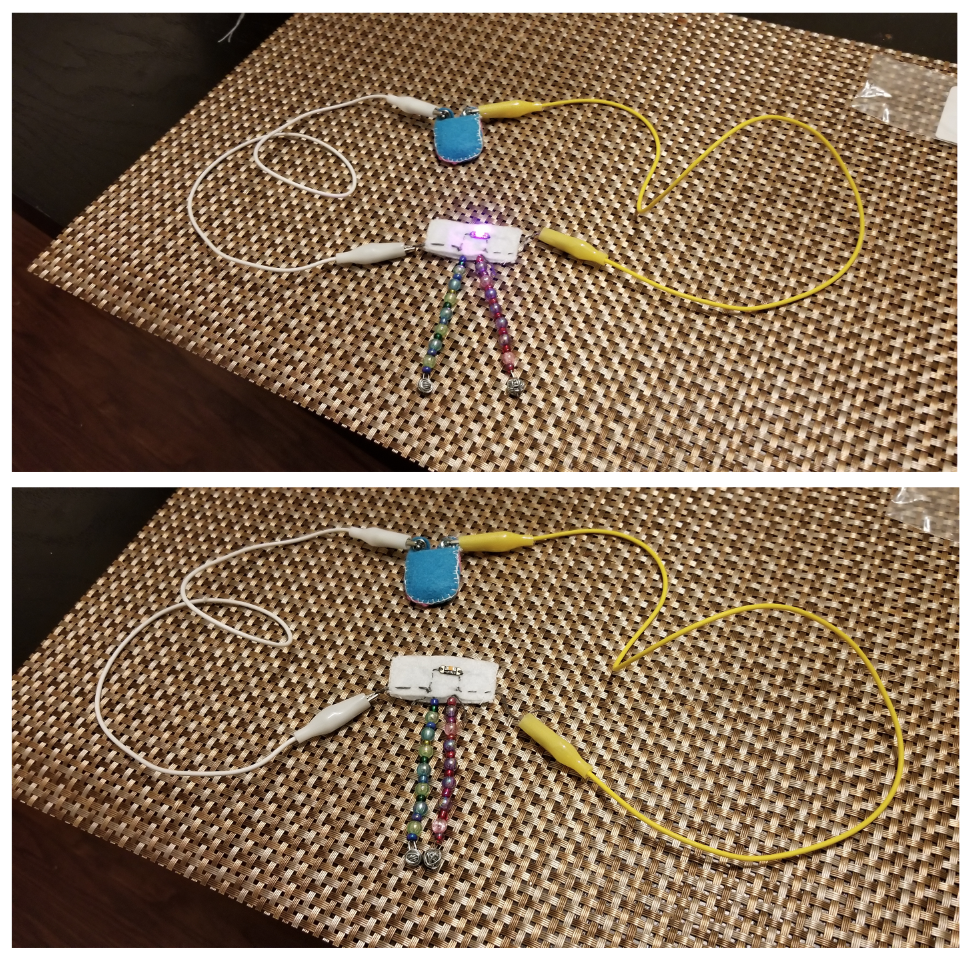 Step 4: Fixing the circuit
After drawing out the circuit, I can see where I went wrong. Connecting the LEDs to each side completed the circuit so I needed to keep the LED on one side. Since I would be hooking this up to an Arduino eventually I would also need a third wire (or thread) to connect to that. When I saw the circuit on paper it made more sense and I was able to map it out better. Following the drawing, I made a new circuit and this time — it worked!

Step 5: Testing with Arduino
I wanted to track the motion of the dog so when it was moving the beads should touch sending a signal to the Arduino. To do this, I used some sample code provided by Arduino. I used the ‘Digital Input Pull Up’ to test it out. If it worked properly this code will return a ‘1’ when the beads are touching and a ‘0’ when they are touching. According to the code I would need to use pin number 2 to track the signal. I connected that pin to the thread that came out the top of the sensor using alligator clips. I connected the ground to ground and made sure to add a 1K resister to the 3.3 volt just incase. I’m actually not sure this needed it but it worked. 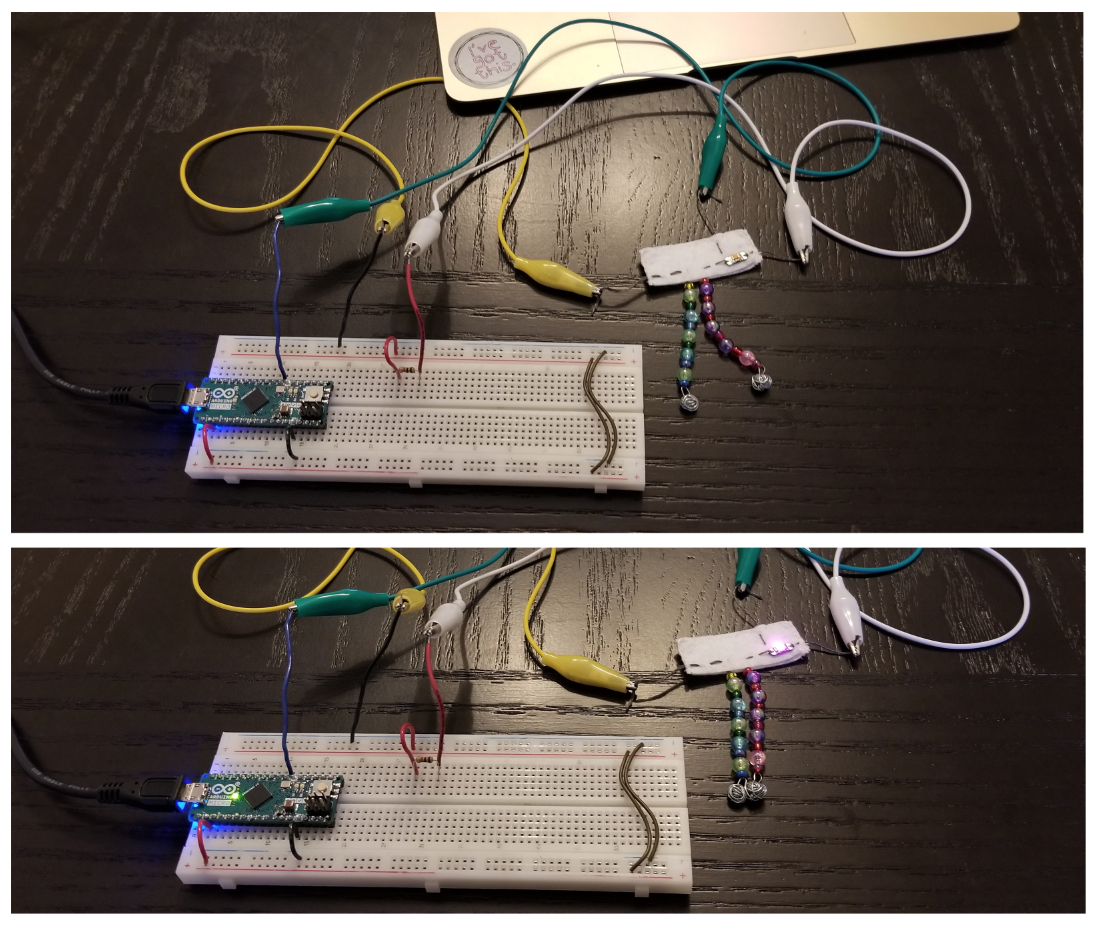 Step 6: Having fun with Dog
The next step was to see if this sensor would even work with the motions of a pet. For the sake of science, I put it on my dog. I disconnected the sensor for my Arduino and taped off the third line to convert this sensor back to just battery operated. I used some leftover wire to twist around the conductive thread on both sides. After that I connected the wire to each side of the battery pack and tucked it behind the collar. The sensor worked perfectly so I attempted to put it on the dog. 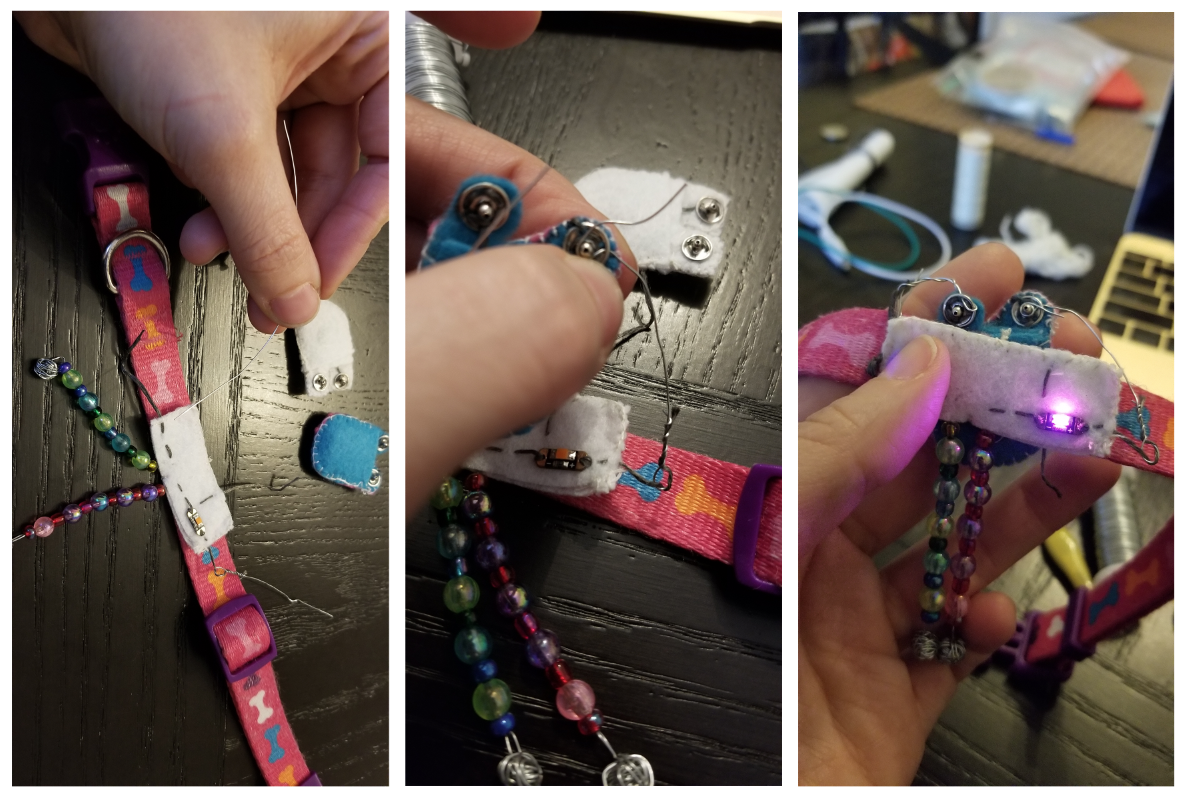 This is Sparkles Joey Joey Superhero. Not a typo, my kids named her and they must feel very strongly about the name ‘Joey’. I had to bribe her with many treats but I got her to wear the collar without trying to chew it off. She ran around with it on and I noticed that the beads didn’t always touch when she was moving but it did light up many times while she wondered. I think another iteration of this should have more strands of beads and maybe a larger surface for the circuit to connect (longer metal bead?) I also wondered what would happen if she fell asleep with the beads touching. That would technically register as movement if the Arduino was hooked up to it. 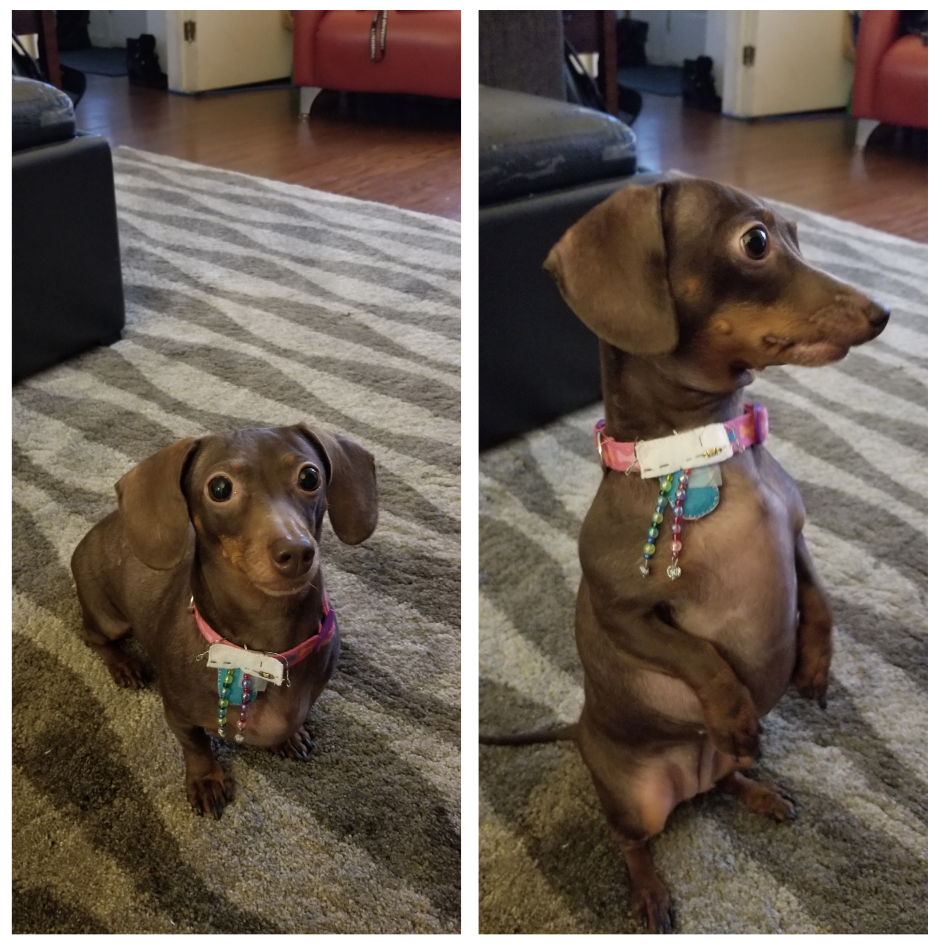