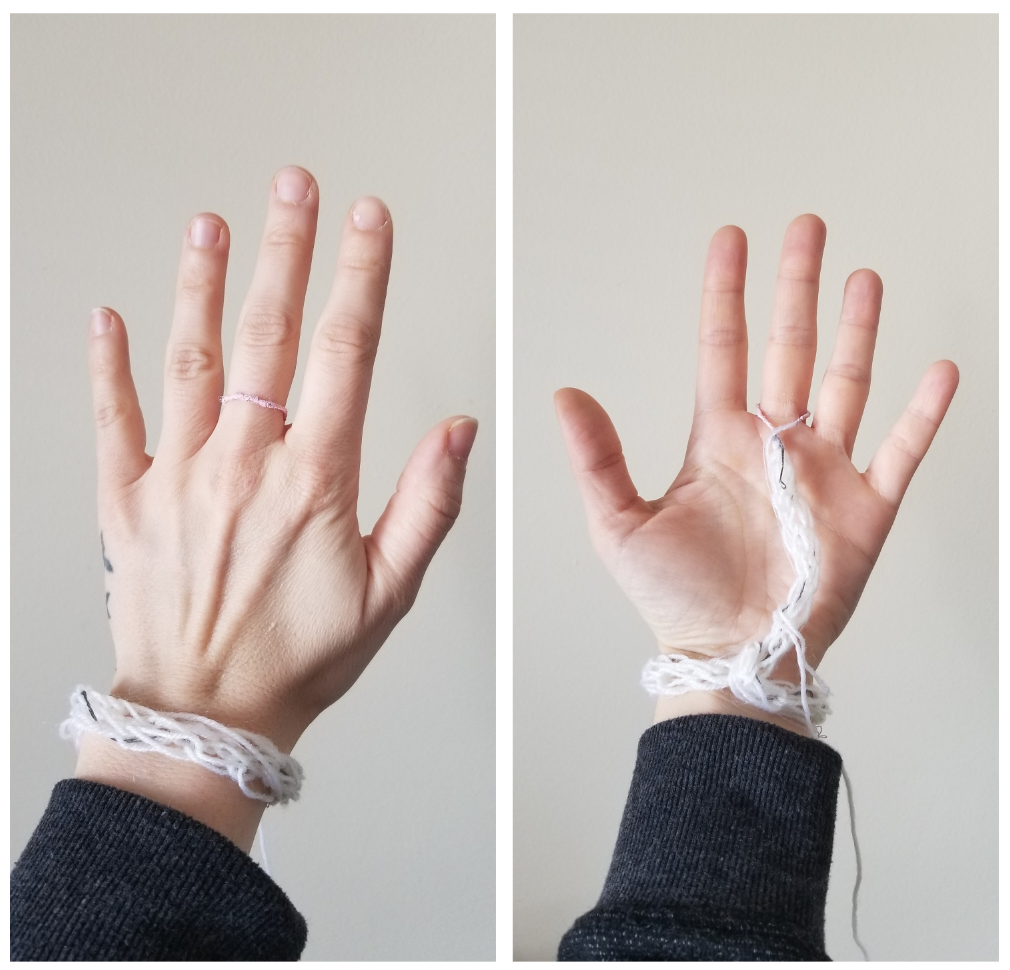 Idea
The purpose of this assignment is to create an ambient reminder, taking that into consideration I thought it would be neat to update the old string on your finger trick for reminders. The new twist would be having the string change colours on your finger to remind you. Since this will need some battery power, I added a bracelet to the design so the ring wouldn’t become bulky.

Workshop and experiments
In class we experimented with Thermochromic pigments. We dyed fabrics and threads and blended the pigments with white paint as well. We tested how resistive thread can be used to send a low current through the pigment in the fabrics to change the colour. 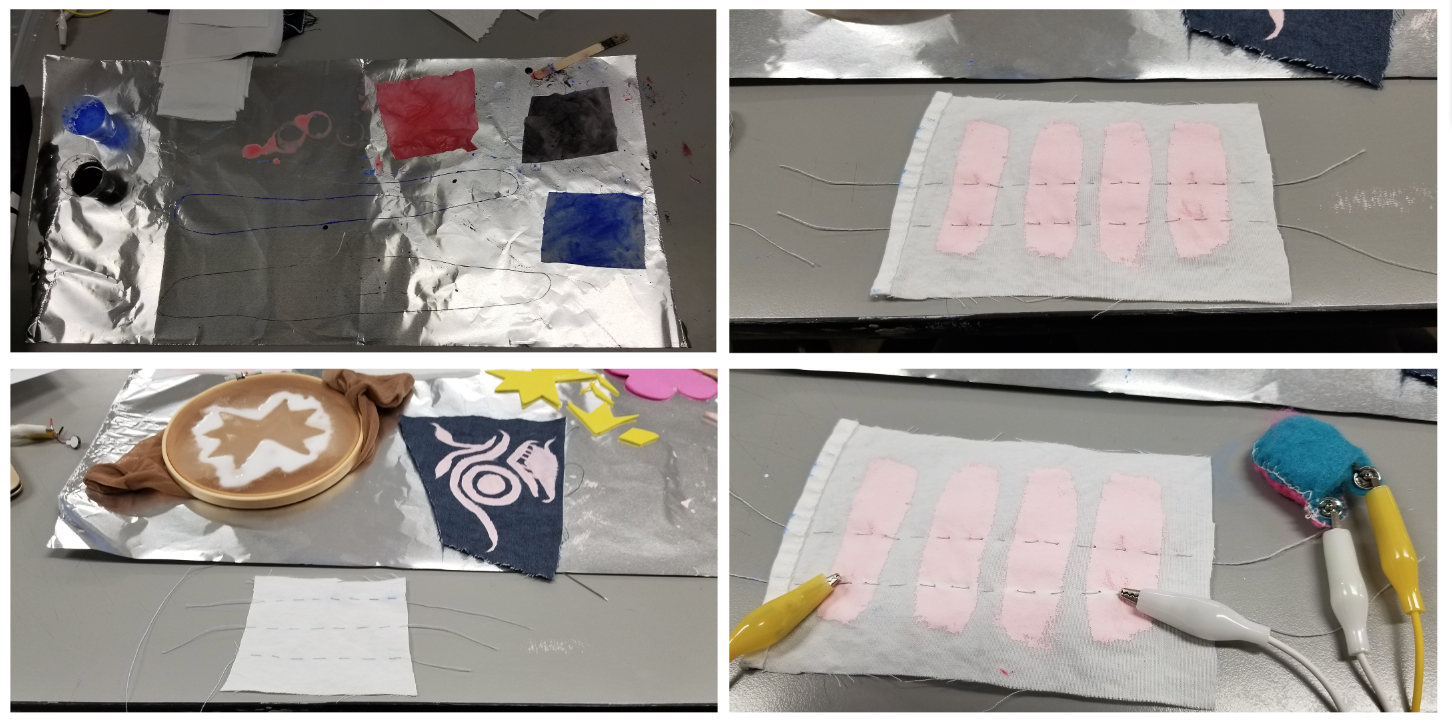 Creating the wearable
After formulating my idea, I started making it. First using a DIY French knitting tool (link to instructions) I created the base of the bracelet and left extra yarn on each side to create a ring. My 1st bead was to use the resistive thread and use my friendship bracelet making skills to weave the thread into the yarn (link to friendship bracelet instructions). Once the thread was incorporated into the yarn I could start testing to see if the colour would change to white and how much voltage I would need — at least that was the plan. 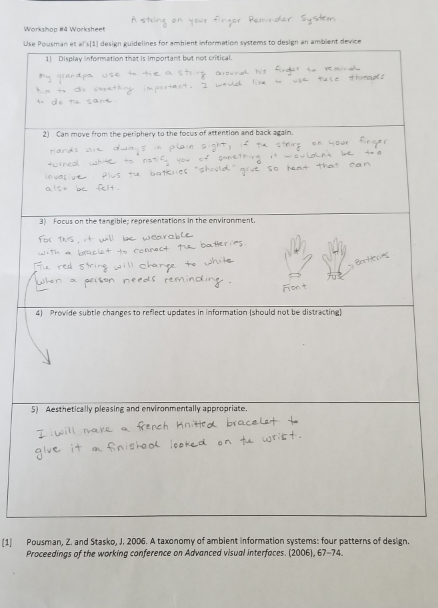 1st Failed Attempt
Turns out, the pigment on the thread brushed off if you handle it to much so as I was weaving the tread the pigments change right off and there was no colour left on the thread. I still ran a line of conductive thread for the resistive thread through the bracelet because I was convinced I would find a way to fix the colour issue. 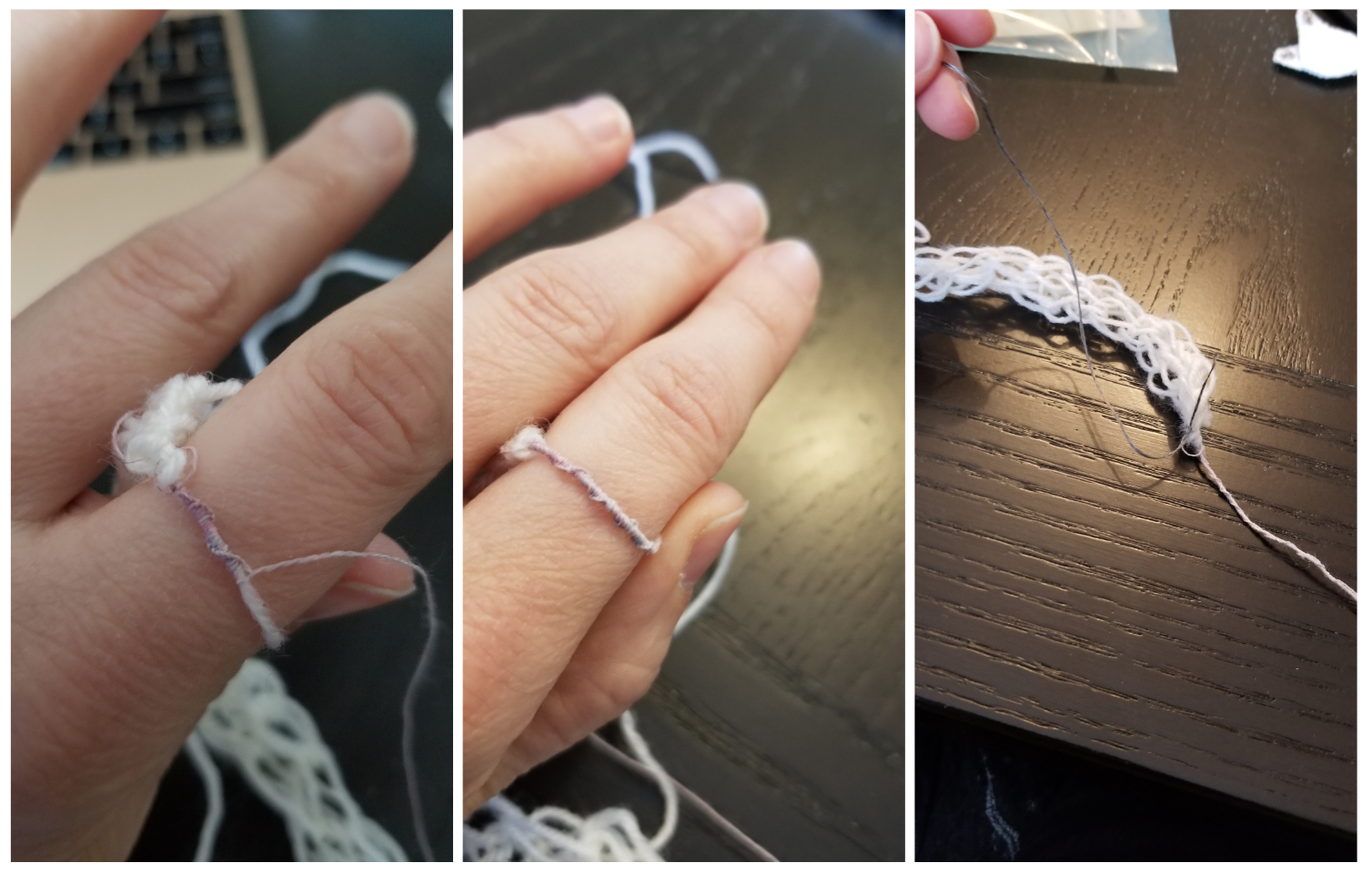 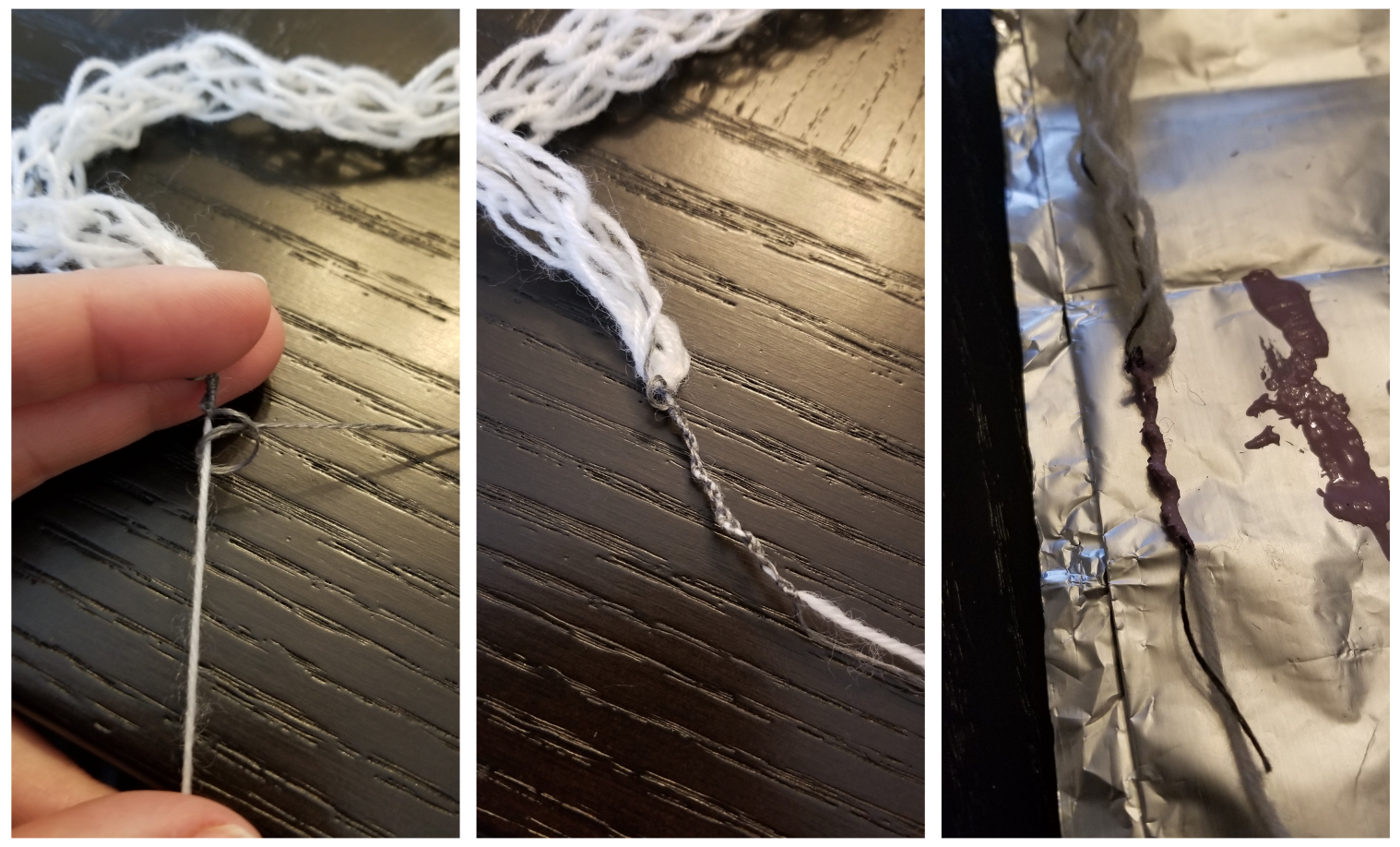 3rd Failed Attempt
Back at the studio, I got my hands on some more pigment mixed in water do I could try dying the 1st attempt to bring the colour back. I thought this worked, it was bright blue and looking amazing. When I tested it, the thread turned white just like it should but when it was disconnected it didn’t go back to blue. It stayed white. Another fail. 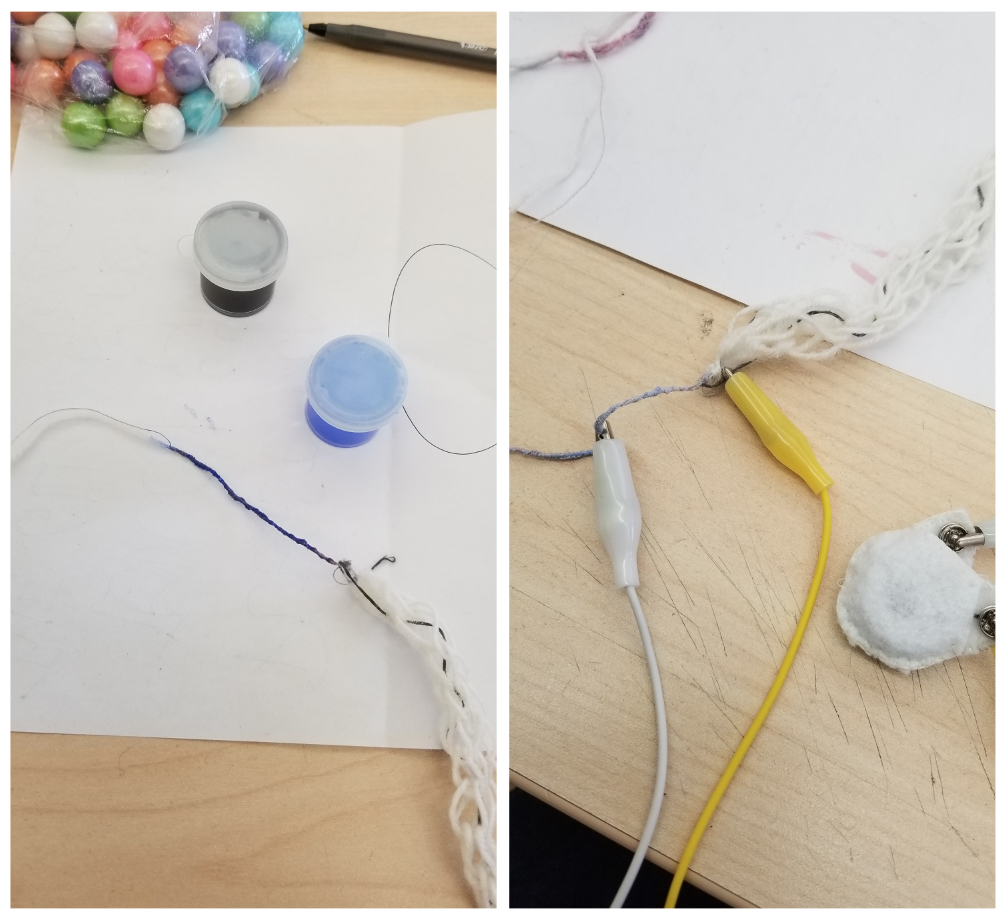 4th Attempt (not ideal)
Out of complete desperation, I another took a test piece of yarn and 5 strands of resistive thread and quickly knotted the yarn with the thread. Then I painted it to see if this would work. Maybe I could still save my original prototype by painting instead of dying the thread. Upon testing, it looked like it would work so I have it a go. 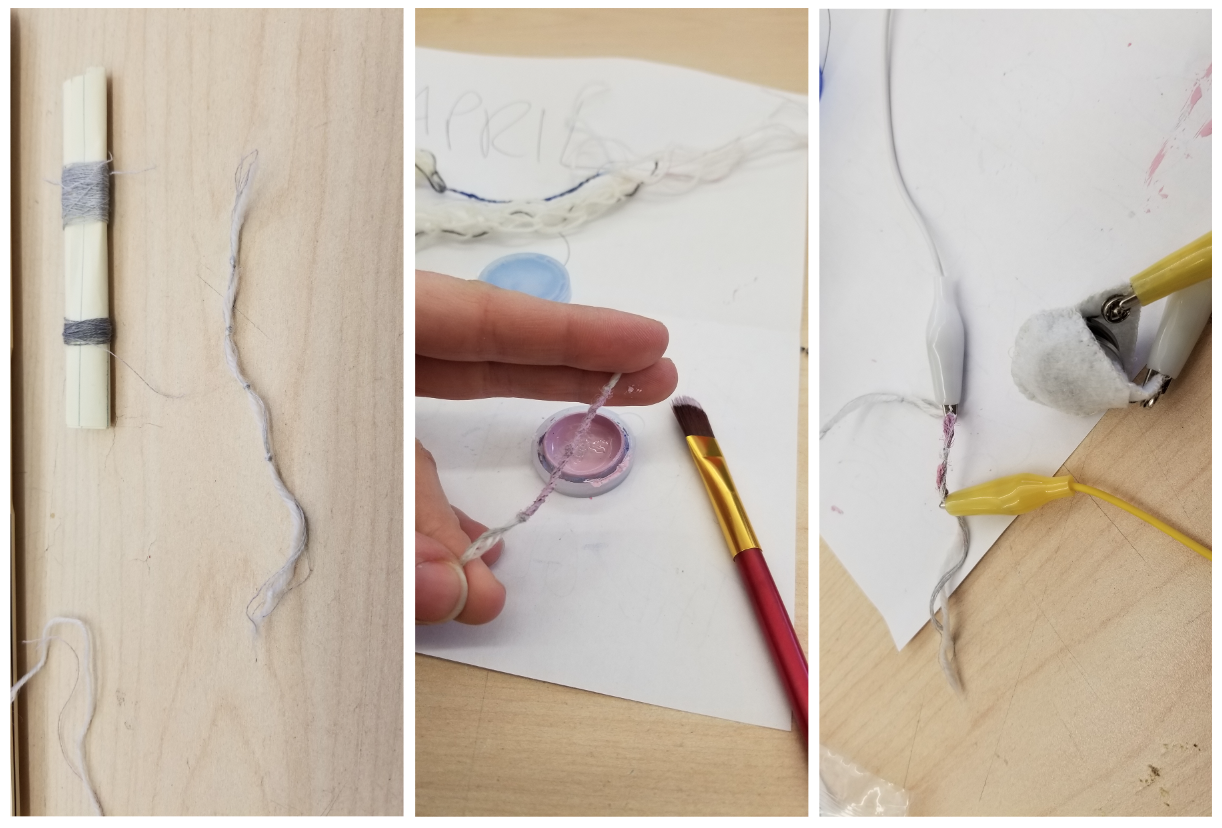 Next Steps
I don’t know if I even want to take this any further. It is a cool idea but the truth is, changing from light pink to white has no impact and is barely noticeable. The out come really doesn’t warrant this much work, in this case. Not sure if it’s just a bad batch of pigments or if I missed an important step to setting the colour but I really didn’t enjoy this medium.