The world of sensors and feedback

For this assignment. We were given a choice of making sensors or to try out existing sensors like heart rate monitor, EMG sensors to select and experiment with keeping in mind the idea of self reflection or self expression.

I tried out the the EMG sensor with my class Nick. From my understanding of the sensor  senses muscle activation. You can then use it to connect to the arduino to get value mapped to sensor value by using a simple serialInputOutput code from sketch examples.

1)How could your design follow the design recommendations? 1) Instead of representing numbers, represent through materials and aesthetic visuals

Thee posture sensor is used for “running in the dark”it not only activates light. This helps the runner maintain a steady speed while keeping them safe. This falls under the idea of biofeedback, using the bodies momentum.

Thee posture sensor is used for “running in the dark”it not only activates light. This helps the runner maintain a steady speed while keeping them safe. This falls under the idea of biofeedback, using the bodies momentum.

I see this sensor as being more of an interaction with the surrounding. Night runs are a great time for reflection and solitary activity. Sometimes, due to some areas not having enough light runners are put in harm’s way from vehicles and unlit paths. I can also see the device having two lights. One to illuminate the path, and one which maybe is connected to a heart sensor.

3) Have enough ambiguity that the individual must interpret what the visualization means for themselves.

4) When designing, constantly reflect on how you are making meaning for the individual through your designs. Could you be insinuating that something is negative, unhealthy, etc. ?

5) Reflect on the authority you are giving to the biofeedback device. How could you transfer this authority to the individual instead?

6) Instead of focusing on self improvement 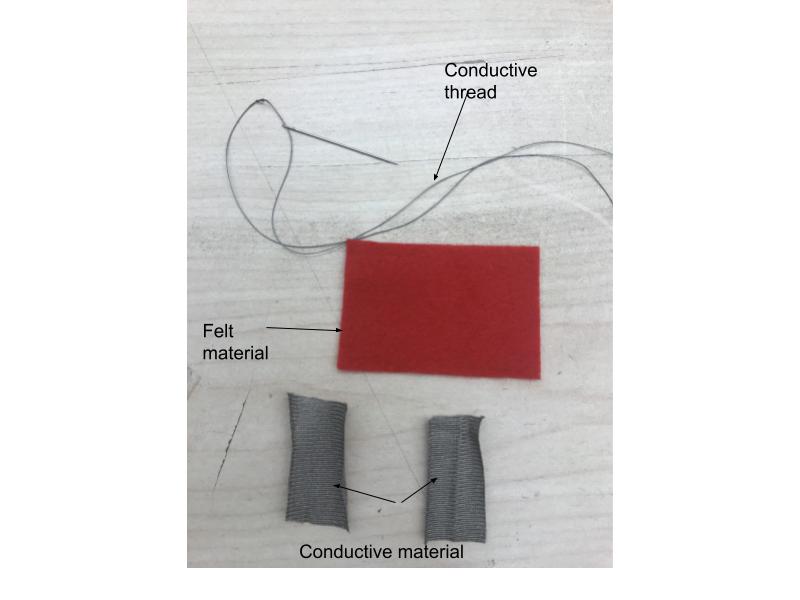 Testing out to see the sensor worked. For this I powered the two conductive materials and grounded the metal piece to achieve the led to go off and on. This is a way to switch the circuit on and off.

Using the same principle of circuit connections, I then proceeded to light two LEDS.

I didn’t use any code to light these LEDS up. If I were to do it, I will connect the two pieces of conductive material to different pins which would trigger the led.

This was an interesting experiment. Building the sensor rather than using an established sensor helped a lot with understanding how they can used to trigger information. One thing that I realized with this sensor was that i am calculating and triggering information about movement.

This sensor is something I can see being incorporated into running and interval training. For example during interval training, runners sprint until they reach a certain heart rate and slow down and sprint again. It would be interesting to have this sensor also be attached the a heart sensor. The heart sensor could trigger a red LED which would inform the runner that it is the optimum time to slow down. The slowdown of the heart rate would then let the runner know again at the optimum time to start sprinting. This would be interesting for athletes who use interval training regularly in their training.