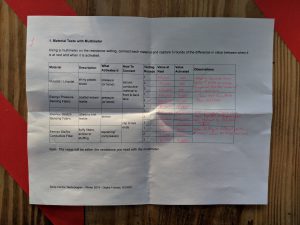 Results from Arduino testing (all with 1K resistor)

My plan was to make a button in the middle of the wearers armpit using the velostat. The button would register as pressed when the wearer make “t-rex” arms.  I will be sewing the neoprene into a pouch in a jersey tube that can be slipped over an arm. Conductive thread will run from either side of the neoprene to connect to the arduino. For testing purposes the arduino LED will blink when sensor reached a number reflecting the active state – over 900. 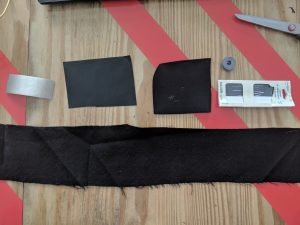 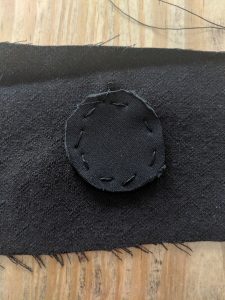 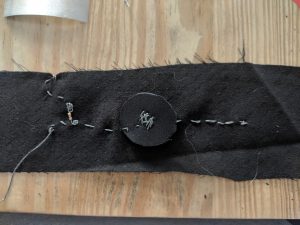 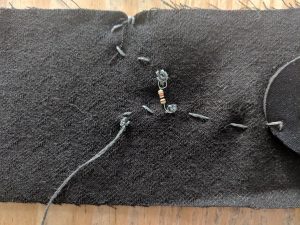 make other conductive side with resister sewn in 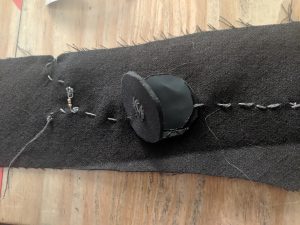 And then close it up and attach the arduino and the code! 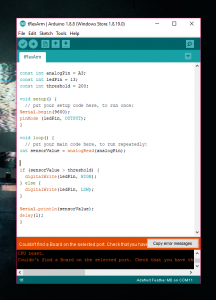 Video of it working can be found here:

Following up on last week and the making of something that has little to do with my work, i wanted to take the opportunity this week to make something that could be incorporated more into my work at large. A tendency I fall into when considered sensors is often to go straight to buttons. Everything is a button! Press it on and off! In contrast to that, the way that i would intend to use this is as something that needs to be held down. Still a button, but a little different. If I were thinking about this as some way to interact with a game pressing a button and holding down a button open up very different possibilities, especially when the holding down the button requires maintaining an awkward body position – entirely my jam. Placing the button in the armpit means that pressing it mimics the position of an arm binder (a piece of fetish gear) which is where is became interesting for me. Thinking about different ways to accomplish bondage like experiences without force is a fun avenue of thinking and could potentially work its way into thesis.

Integrating and making permanent the circuit would definitely help to polish the look, which I would definitely want t do if i were going to be developing it further. Also I would consider the necessity of the arduino and whether or not that could be done without and as it adds a lot of bulk – If i could make a game without it, I would.