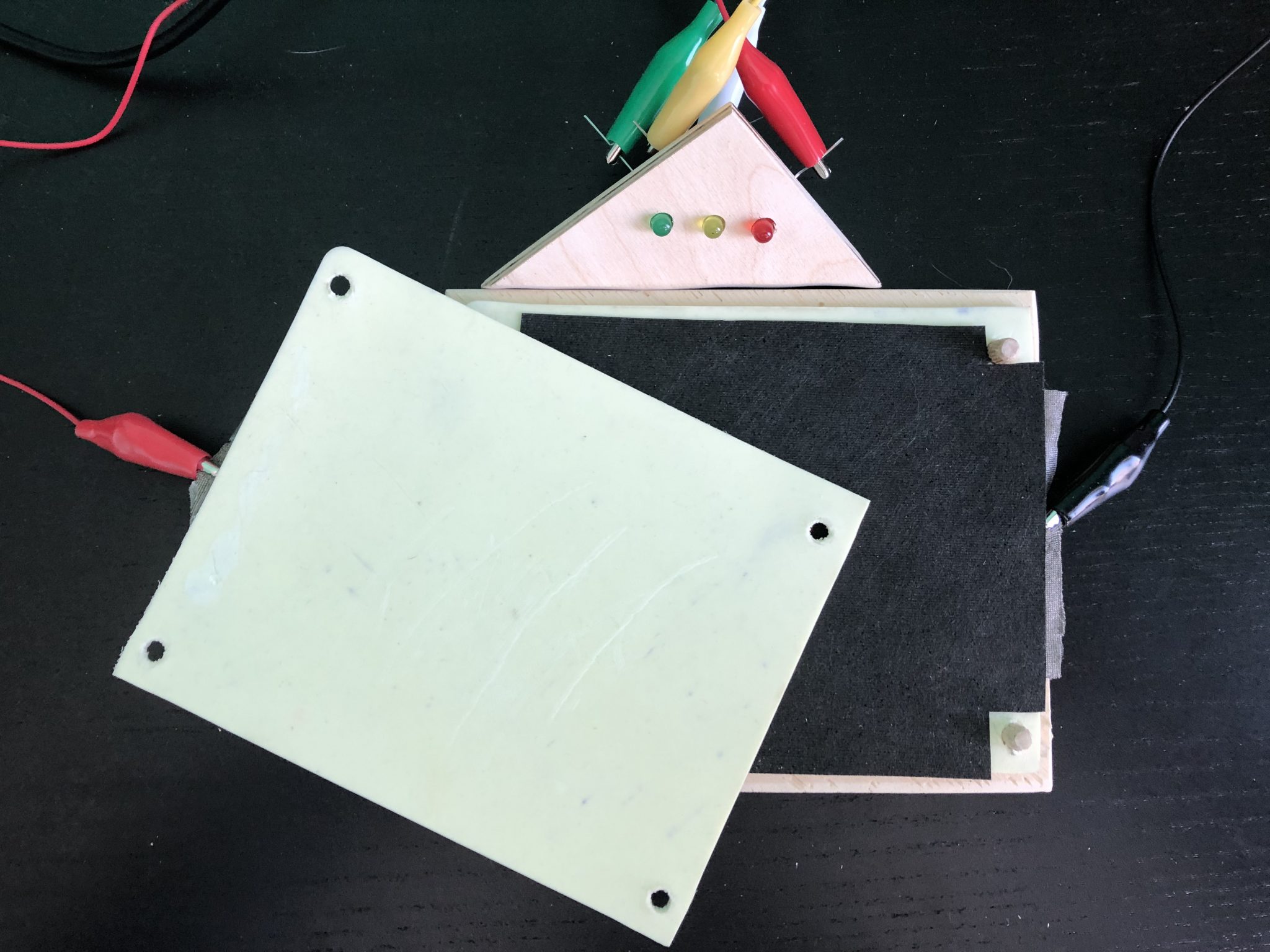 Tattoo practicing can be extremely frustrating because it’s difficult to find people who are willing to volunteer their skin for beginner tattoo artists to practice on. So, many artists start with fake skin, which is a tattoo practice sheet made of silicon. A very popular starting point, which might not be very good because it has no indication on whether the student is doing it right or wrong. I’ve been to many tattoo conventions and most tattoo artists I met are self-taught, which is usually a very long process because of a shortage of volunteers and lack of direction. I remember when I was starting to use fake skin sheets for the first time, I had no idea whether the needle was going too deep or too shallow, which can be problematic because the whole point of the practice is to build the correct muscle memory.

So, I want to use this experiment as an opportunity to explore how to extend the tattoo practice sheet to a more reliable tool for new tattoo students. The sensor I created allows the students to tattoo on the practice sheets while the tool is indicating levels of pressure: green for “okay”, yellow for “a little too hard”, and red for “too much pressure”.

When the tattoo student is ready, they will hold the machine as they would normally and start tattooing. It is vital to know the correct angle to hold the tattoo machine at because tattoo ink is supposed to be pushed by the needle into the Dermis, which is the second layer of skin we have under the Epidermis (top layer of skin). If the ink is not pushed far enough in, it will not stick and eventually will be pushed out by the skin. However, if the ink is pushed too far deep in, past the Dermis, the ink will be spread out too much and ruin the quality of the piece. So, it is vital for the tattoo artist to train their hand muscles to memorize the movement and the angle, with continuous practice, accurate muscle memory is achievable.

So, after the tool is assembled, with all the layers in the right order, the green LED will be lit. As long as the machine is held in the right angle, and the pressure on the needle is not too high, the green light will indicate that the student is on the right track. However, once the yellow LED is lit, the student has a chance to fix the gesture back to the green zone. Red LED is an indication that the pressure is too high and most likely it would’ve caused some bleeding on human skin.

First, I started with filling the measurements sheets, which is great because I was able to test the different values of the conductive textiles we received in our kits. This allowed me to see the variations between the values “at rest” and “activated” before I start building my sensor.

I tested the different textiles to see which would work best for my sensor, and I realized that, out of the textiles in the kit, the Velostat worked best for this tool.

Video of the test

Next, I started sketching different variations of what that tool might look like. As a tattoo student, I have some insights into what I believe how this tool should be used and how it should look like to effectively perform its intended function. On the other hand, this is a speculative approach, and I was open, throughout the process, to changes and modifications to the concept.

In the initial sketches, I was planning to use a regular foamboard for the back support, with conductive fabric and Velostat sheet between the back and the front layers. When I built this prototype, I quickly realized that without proper support, this device will not be functional as it’s supposed to, because the layers will constantly move which will cause unstable values.

For my second prototype, I decided to use wood as back support with four pins on each corner to hold each layer down in its place. The reason is that wood is not conductive, and since the wooden pins will be holding down every layer, a conductive pin can cause shortcircuiting and/or inaccurate results.

Once I had this prototype completed, it was a matter of tweaking and fine-tuning the parts in order to get the intended results. So, moving to the LEDs, which are essential to this tool’s function, was relatively an easy process. I used the generic 2-pin LEDs in 3 colors, green, yellow and red.

Although the tool I created is an early prototype with a lot of wires showing, I made sure that it is stable and portable. However, for my second prototype, I am planning to create a shell for all the parts, and soldering all the parts together in order to make sure it will last over long use.

The resistor I used for this sensor was a 26k resistor. This was the highest resistance I had and so I had to work with it. Using the 26k resistor dropped the values on the serial enough for me to be able to work with effectively. For example, with the 26k resistor, the “at rest” value was between 800 and 840. Although that’s a little high pressure,   tattooing does require some pressure and so I decided to make the “green” up to 889, and between 890 and 909 is for “yellow” and above 910 is for “red”.

After testing the sensor with a tattoo machine, some fine-tuning had to be done, but more or less the response through the LEDs was sufficient for me.

To build this sensor tool, I decided to work based off one of the example codes provided in the Arduino software. However, the original code only included 1 LED with different functionality than what I’m looking for, so, some changes had to be done to the code.

First, I added adjusted the code to remove the outputValue because I did not need the values to be mapped to 255, instead, I used the original 0-1023 range and split it into three levels, 0-840 for acceptable pressure and added an “if statement” to let the green LED value “HIGH” when the statement is true. Then, I added an “else if” statement for the yellow and red values 840-910, then 910 and above respectively. This way, the relevant LED lights when the relevant pressure value is reached.

Building this tool was a special experience. I remember using the tattoo practice sheets and thinking that they were not very effective and I remember wanting to do something about it. This experiment gave this chance and I am glad that I came out of it knowing more than going in.

Learning the different uses for the conductive sheets was a helpful exercise, this is my first real exploration into the conductive fabric world, but I can already see how much value it can add to our lives. However, I also learned that they are not easy to work with and troubleshooting can be also difficult since there are no parts to fix. For example, the values I received on the serial port did not match the values I got when I was filling out the sheet at the beginning. So, I had to revisit those values and see why they are different and how I can try to fix them. Eventually, I was able to map the values I received

I also learned how important resistors are when using conductive fabric with Arduino. When I was testing different resistors to see how the values change, I noticed that without the correct resistor, it’s almost impossible to receive accurate or stable values.

As I mentioned before, this is an early prototype, even though it functions well enough, in my opinion still looks rough. So, for my next iteration, I would like to finalize the look and the style of the device. Moreover, I want to consider more possibilities for the materials besides wood, perhaps consider a 3D printed base that can house all the electronics, while providing support to hold the silicon and the Velostat sheets.

Also, I want to purchase a full set of resistors and test out a few more options for more accurate values. If I can drop the “at rest” value using a higher resistor, it can allow me to fine-tune the sensor even more, which would eventually make the response more accurate to the pressure of the needle on the tattoo machine.