…Behind the Starbucks Logo I 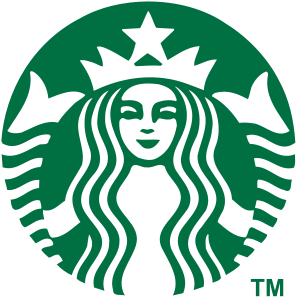 Starbuck is one of my favourite coffee shops not only due to the different tastes of its coffee, beverage and sweet desserts but also the unique design of its twin-tailed mermaid that attracts me. By looking at the logo design while drinking its coffee, a lot of interesting questions come to my mind: who designed this logo? What’s the story and symbolism behind this logo? And, What about the evolution of its logo design history? Why is the mermaid twin-tailed? I bring these questions with curiosity and start to do some research. I find that some secret information reveals behind its logo design. Due to further research about Starbucks logo design, I divide this post into two sections. This is section one. If you are interested or want to know further information about the Starbucks logo design, you can continue to visit section two. Thank you!

The stories behind the Starbucks logo had slightly altered versions. The one is a mythological legend-woman and half-fish creature typically called a Siren. Its creature is usually known as a mermaid according to the ancient Greeks. Sirens seduced Mariners with beautiful songs and promises of sex and then killed them.

Another version can be traced back to the 15th century, it is about the twin-tailed siren Melusine. In the legend, Melusine transformed the human, agreed to marry a man on the condition that she be left alone one day a week to do as she pleased in private. After some years, the man became jealous and broke into her room…he discovered that his wife was not a human. Melusine had to leave her husband and child, then transformed herself into a dragon in a shrieking fury. Since then, The man never saw her again. 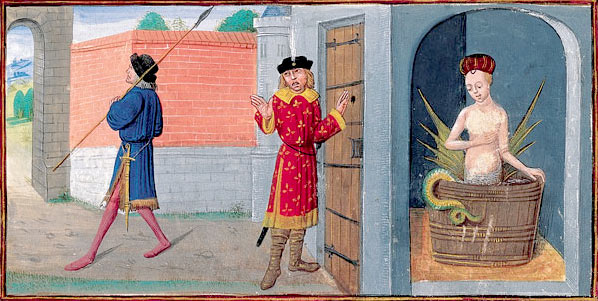 The Starbucks chain was founded by 2 teachers and a writer: Jerry Baldwin(an English teacher), Zev Siegel(a history teacher) and Gordon Bowker( a writer). Three men without any prior business experience decided to start the first Starbucks store. The trio opened their first location way back in 1971 in Pike Place Market in Seattle. They came together to sell the bags of roasted coffee beans. As of 2018, the company operates 28,218 locations and 238,000 employees worldwide.

The Starbucks logo experienced 4  evolutions from the past to now:

The first time was when they were designing the twin-tailed siren in its original appearance that looked huge and seductive. But this design was controversial because of its seductive looking: the huge bellybuttons, breasts, and beer belly that looks pregnant. Some letters of women complaining about the sirens risque poses grew and so they made further changes.

1987-1992  Howard Schulz bought the company and came up with a modified logo version. The design still maintained the whole body of Siren but the appearance of Siren was simplified and changed. Bare-bodied siren covered with a flowing hair was depicted under the design. The company’s brand name got featured in wordmark inside the circle. Two stars on either side were embossed for making it glow like a diamond. Additionally, the logo saw an update in the introduction of a green colour palette for representing uniqueness, growth, freshness and reliability on the Starbucks coffee product. The innovation made the Starbucks symbol a little more conservative yet even more beautiful.

1992-2011  The design idea was the same, but the mermaid’s image was cropped to the navel region with the tails now partially visible. The naval was now been taken away by the designers and only a fishtail was visible in the logo. Green and White colour palette remained over there.

From 2011 to today  The business logo continued to simplify the feature of Siren into essential elements and enlarged the image of the Siren in green colour fulfilling most of the logo area. In this version, all that is left from the previous one is the core – the exact copy of the mermaid. The brown background was changed to green, and the outer border is gone. With thousands of locations around the world, there is hardly a possibility of mistaking the brand for another one.

… Behind the Starbucks Logo II: The Hidden message

Note: This part is Section II. If you do not see Section I, please visit Section I at first. Thank you!

This section is to analyze the hidden information behind the Starbucks Logo in 1971 and 1992.

The Starbucks Corporation, which celebrates its 40th anniversary in March 2011, unveiled a new logo today in Seattle. Starbucks CEO Howard Schultz claimed that“We wanted to simplify our logo so that consumers overseas could more easily identify us. We received thousands of submissions for the redesigned logos and picked the one we thought was best. But we had no idea it contained satanic imagery!” 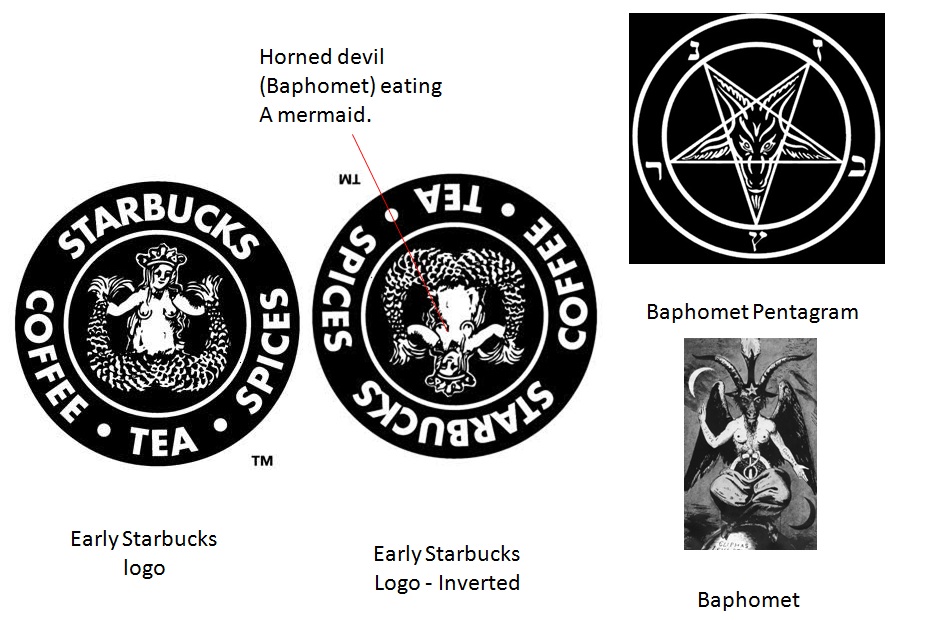 Religious rights groups say the new logo is replete with devilish symbols, especially in 1971 and 1992. According to the video from ” 5 Darkest Starbucks Secrets”, it reveals the hidden information behind this logo by flipping the logo up to down. It said:” Conspiracy theorists believe that the changes were made to hide Starbucks’s true intent: Rotated the logo upside-down, the siren’s out-of-place tail appears more at home as the horns of Baphomet.” The Starbucks Company has a long history with Satanism. Since its very inception, people have been accusing the Seattle-based coffee company of promoting pagan values.

As we know, the story of Siren behind Starbucks Logo, Siren seduced sailors and kill them.  The story actually has its relation to Satanism.

Harvard symbolist Gary L. Blankstein. said
“Siren, like the ones that adorn each cup of Starbucks coffee, have traditionally been associated with Satanism. In ancient folklore, Siren were believed to be the bodies of deceased prostitutes, possessed by the devil to seek revenge on unfaithful sailors.” The article from revealing truth today claims that the Starbucks logo has additional sinister roots. By Noticing the original Starbucks logo and notice the two tails, then we could think about: How could a mermaid swim with two tails? She couldn’t. But are they really “tails?” Or is it an image of a woman spreading her serpentine legs apart in an inappropriate way? Does it show the information about the tail is “split” or “spread open” as to welcome men to her sexually? After many complaints about the original logo, Starbucks edited it.

“However, the new logo is still a siren and it still represents the same sensuality and loose morals of a siren. Again, why would Starbucks choose a siren for their logo when they are selling coffee? Because in this evil day and age we live in (it is unfortunate) “sex sells”. It is sad that many people and companies have such loose morals. Society is being manipulated by many marketing agencies that produce sultry perfume ads, scantily-clad models in commercials, and even manipulate society by the very idea of sexuality.” From this point of view, we could conclude that the hidden symbolism behind the Starbucks logo is actually representing our loose morals of modern society.

The most popular conspiracy theory is that it is a symbol of the Illuminati. The main idea is that the Illuminati are placing satanic symbols all over the world. Every time you grab a cup of Starbucks coffee you are actually being brainwashed by their secret symbolism.

If you analyze its logo design, you can find that it was linked from different angels to one triangle with a star that acts as the eye. 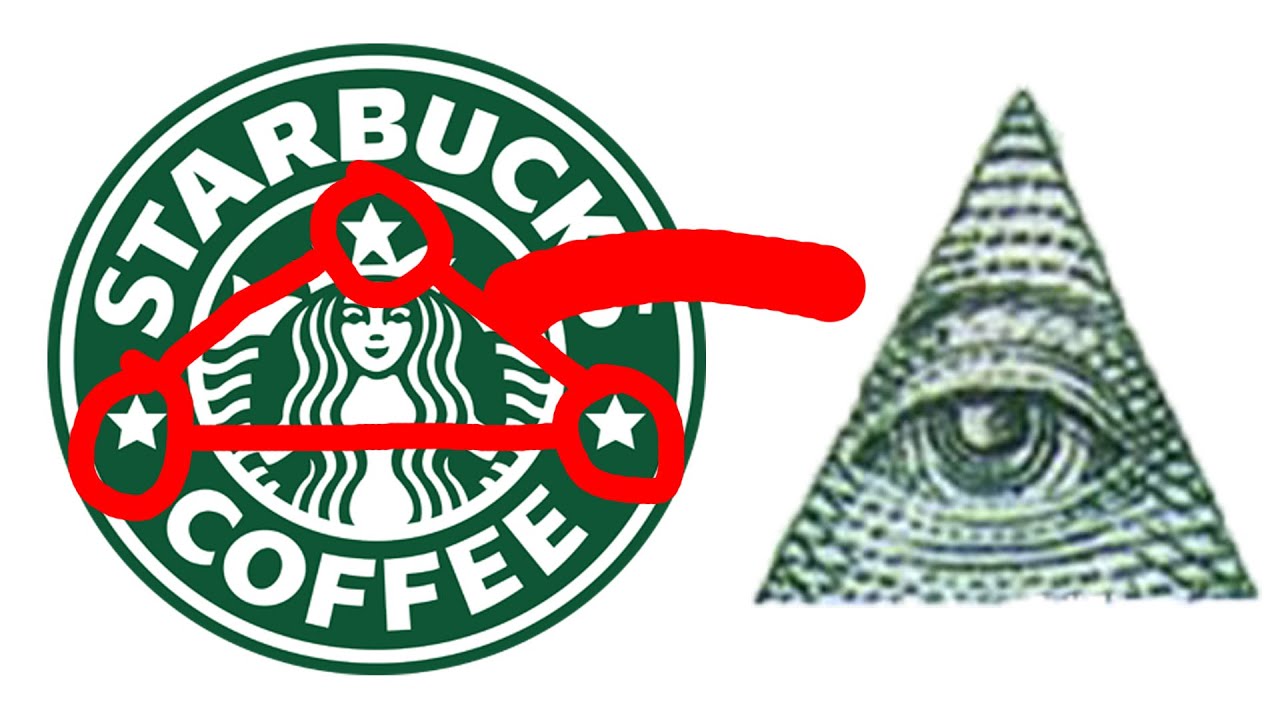 By looking at the 1992’s Starbucks’logo: the circle within a circle often symbolizes the secret society the outer circle is unaware of what the instructor does and look at the numbers of circles (except the letter “O”), they are six rings totally which can be a representation of 666.

So, what do you think of the Starbucks logo design?

Guys I know were not being graded on this anymore but I hope you see this because I want to share this movie suggestion. I haven’t even seen the movie because its not out in Canada yet but omg I have so much faith in it that I have to share, its called Call Me By Your Name and it looks so good. Heres the trailer.

some cute ways to decorate your lattes! 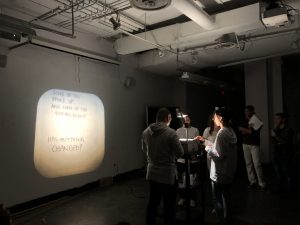 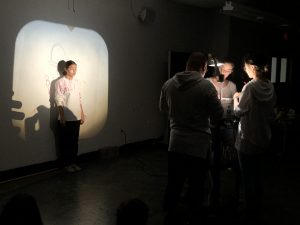 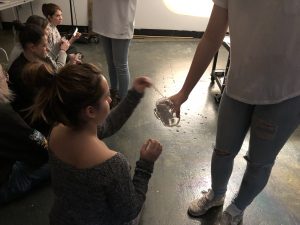 You know those people who love to go around talking about their quirks, whether they’re real or imagined? Like, the kind of person who loves talking about her gluten intolerance or how she’s synesthetic? I’m that kind of person: I maintain that I’m allergic to whole apples (not cut apples, mind you — I only get a bump on my lip when I eat whole apples), sneeze in direct sunlight, and have poor circulation. None of those has been diagnosed by doctors, but who knows me better than me? Anyway, when I found out there was a test that tells you how color sensitive you are, I understandably got excited.

Here is my result, looks not bad. 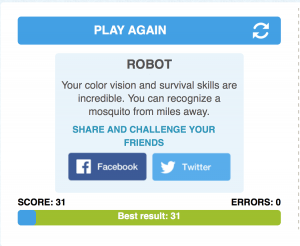 There is a great name in the history of photography: Henri Cartier Bresson. He has a concept of photography which affects the almost entire photography world, which is “The Decisive Moment”, I used to consider these three words as the Bible of photography. Briefly, It tells that you should only click the shutter bottom at the perfect time with the perfect frame.

However, there is another idea called “The Indecisive Moment” which is really interesting: It tells people that a perfect photo has already lost the essence of photography, it supposes to be imperfect, otherwise, why don’t you just paint or draw?

Of course, photography is not gonna die. However, in my opinion, with the development of technology, I believe people will re-focus on the immediateness of photography.

There is a small new feature in the new iPhone X: portrait lighting mode. Basically, the dual cameras on iPhone will scan your face, and then based on the depth of your face, your iPhone can build a 3D model of your face, it can simulate studio lighting environment. In another word, you don’t need a studio anymore with the help of technology. It’s pretty much like our superhero movies, most of those scenes were shot in front of a green background. Remember the airport fighting science in Captain America: Civil War? Well, the truth is that only a few actors were “actually” in the scene, roles like Iron Man or Black Panther were completely CGI. Also, even the airport is actually a huge green background. It isn’t hard to think, this kind of technology one day will come to photography. Not just professional studio lights, maybe one day we don’t even need a real model. People can simply make a perfect model on a computer. Nevertheless, we can still tell the differences between real photos and computer-generated imagery if we look closely. What about 10 years later? What about 20 years later? Can we still distinguish the differences?

Therefore, I believe one of the essences of photography, which is immediateness, will become more and more important when every other thing can be made on a computer. As I said in my previous posts, I think commercial photography will die one day because there is nothing more perfect than computer-generated images.

But the good news is people will still need photographers to take photos for weddings, events, and so on.

Hey guys heres a Christmas spotify playlist that I like 🙂 Happy Early Holidays!