The biggest concern for me with this project was creating a piece that people would actually be comfortable using, and that would be practical. Most of my ideas in the beginning were really basic touch circuits but I wasn’t really happy with them because it seemed like that would just be another impractical project that I make and then never touch again.

Because of this, I decided to build a small wooden box with a circuit engraved on top. Inlaid into the circuit groves are my electronic components (wires and a red 5mm LED), which are connected to 4.5V worth of AA batteries (3 x 1.5V each) and a small solenoid inside the box. The solenoid, when current isn’t running through it, holds the box closed by keeping its “arm” extended through a metal hook attached to the roof.

CONTEXT: You and your two closest allies are running a small cash-based business. You keep all of your cash in the box, which should only ever be opened in the presence of all three of you. Each of you has a ring. When you come together, you each remove your ring and place it in its respective grove on the top of the box, connecting the circuit and sending voltage to the solenoid inside, which snaps back and allows the box to be opened.

Photos of the Final Work 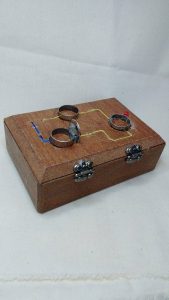 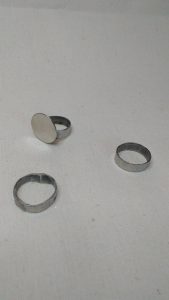 I forgot to take photos of my process but I thought it would be useful to describe what I did step-by-step. 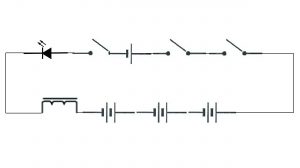 note* the three switches represent each of the three metal rings, and that weird thing on the bottom left is a solenoid