Born from the queer and predominantly black youth in Harlem, ballroom has grown to an international scene and still serves as a platform for all types of creativity. Participants compete at balls where they try and win different categories and make a name for themselves. The best known of these categories is performance (vogueing) which has found mainstream recognition with dancers touring with Rihanna and FKA Twigs.

The most common form of vogue now is vogue fem which consists of “…Dramatics(which emphasizes stunts, tricks, and speed) to Soft (which emphasizes a graceful, beautiful, easy flow and flow continuations between the five elements)” Voguing

Catwalk: Catwalking is an exaggerated feminine walk where the legs are crossed over each other, the hips are thrust from side to side, and the hands are thrown forward in opposition to the legs.

Hands: In performance the hands of the performer should tell a story. Often this is the component of performing used to throw shade. For example miming an expression of horror at the way the opponents face looks.

Floorwork: This component demonstrates the competitors sensuality as they roll, twist, and otherwise move on the ground in such a way as to capture the attention of the judges.

Spins and Dips: This is the showiest component of vogue. These are the turns on beat, and the drops to the floor. A spin or dip is only done correctly when it executed with the climax happening on the beat.

For this piece I wanted to use a noise reactive inverter to respond to the harsh vogue beats and to arrange the EL wire to create a stylized feminine curve that voguers strive for.

An illustration of the circuit layout

This piece was not as well realized as I would hope but I gained experience sewing with clear thread and working on a mannequin. Future iterations would involve drafting a specific pattern, ordering sewable EL wire and diffusing the light through fabric choices. 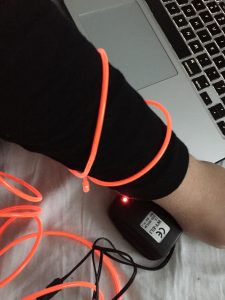 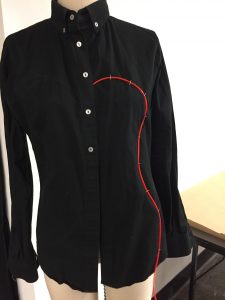 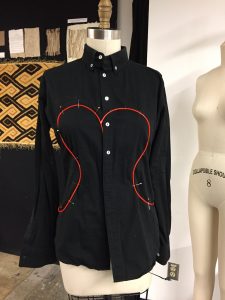 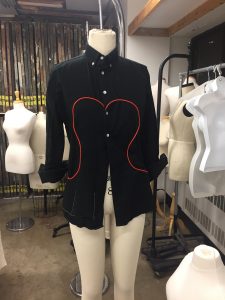 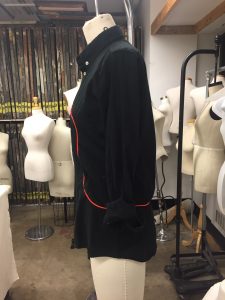