For my project I was inspired to make something that I could use everyday, like an accessory rather than a garment (which you would have to wash before wearing twice). I decided to alter a pair of boots that I got from Salvation Army, because I could make them a flashy addition to club nights and parties.

I got a pair of boots with a sort of legwarmer attached, which was perfect for concealing the electronic components of my project. I assembled the piece by first creating a bundle of fibre optic cable (recovered from an old wand toy), then affixing it to a 5mm super bright white LED using black heatshrink tubing. I chose black tubing so no ambient light would slip through the legwarmer fabric of the boot. I then sewed the LED to a coin cell battery holder and created a switch for my circuit using metal sewing snaps. Then I fanned out the fibre optic cable and sewed bundles of 5-10 strands around the boot in a fan pattern, securing the end of each bundle with a drop of hot glue, which also serves to spread the light coming from the end of each strand. 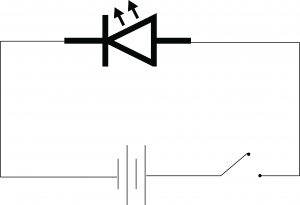 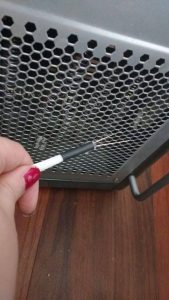 ^^ this shows the bundle of fibre optic cable held to the LED with heat shrink tubing, which I heated up with my space heater (shown). In my first iteration I used a hair dryer to heat it up, but it was such direct heat that it warped all the fibre optics too 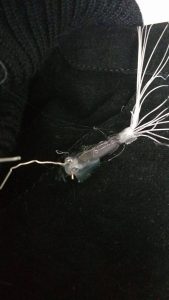 ^^ this is still my first iteration, when I was working with the warped fibre optic cables still (I wanted to make sure it worked before starting again with newer ones). This iteration finally killed itself when the negative arm of the LED broke off 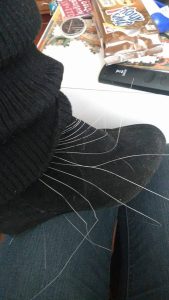 ^^ this is a near-finished version of my first iteration, when I used single strands of fibre optic cable instead of small bundles. The light didn’t really show up that well though so I decided to use the bundles with a blob of hot glue to really amplify it 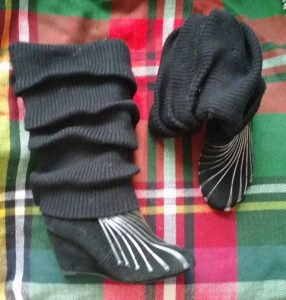 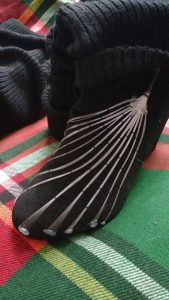 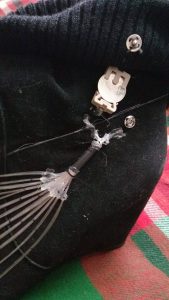 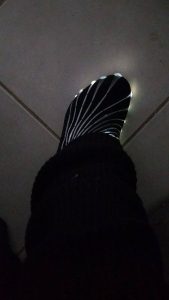 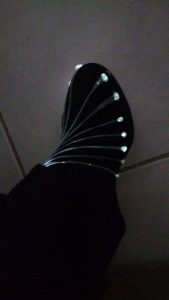 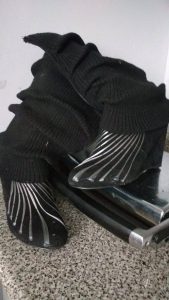