Media Molecule’s Little Big Planet is the next big thing. With spectacular graphics, physics, audio, and gameplay, this game has truly made a positive difference to the genre of puzzle platform video games. 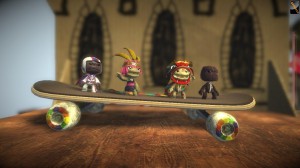 Play with up to four friends!

The objective of each level in Little Big Planet is to travel from Point A to Point B while overcoming several kinds of obstacles. It’s easy to navigate in this game as the player travels through a linear two-dimensional universe with three levels of depth. The controls are simple and easy to learn. The left analog stick controls the direction in which the sackperson moves and X is to jump. R1 is to either hold onto a sackperson or item, or perform whatever abilities come along with the mechanism the sackperson is currently equipped with.

The rest of the buttons don’t contribute to the progression of finishing a level but allows players to express their emotions through their sackperson. The four buttons on the directional pad allows the player to change their sackperson’s facial expression from neutral to three degrees of happiness, sadness, anger, and fear. Holding down L2 and/or R2 and rotating the left and right stick allows the arms of the sackperson to swing as they please. Moving the actual controller will make the sackperson’s head or hips move in synchronization. And did I mention that your sackperson’s mouth moves to the sound of your voice? 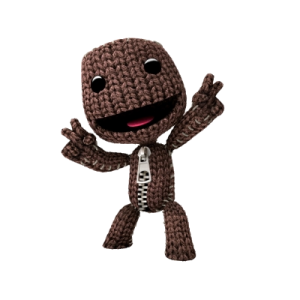 When moving your arms while happy, your sackperson will automatically do the peace sign!

It seems simple enough as the game consists of four cute little sackpeople scattering across the screen. However, making it through the levels with a limited number of checkpoints prove to be quite challenging even for hardcore gamers. Completing a level normally takes around ten minutes depending on the difficulty. However, players have the option to enjoy a candlelit dinner on the beach of a resort or escape from deadly sharks while explosives fall from the sky. 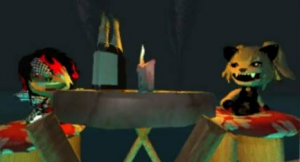 No money? No problem! Enjoy a virtual honeymoon by the beach.

The game highly encourages the aspect of playing with other players. Although the game can be completed with only one player, it’s always more fun with a companion and some bonus puzzles can only be completed with the help of a friend.   Levels are easier working with another sackperson but they may use up your checkpoints. Besides that, you can always smack your friends, throw them into death traps with the grabinator, restrain them with the grappling hook, or blind them with green goo using the paintinator. 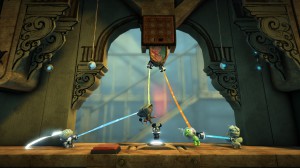 Use the grappling hook to swing! ...or to stop your friends from swinging.

The significant aspect of Little Big Planet is that it makes the MDA relationship between designer and player indistinguishable. When going through the campaign levels, players can collect items and complete challenges to gain tools, items, decorations, costumes, music, and anything you can find within the levels. All players have access to all the items used to create the campaign levels and more. Media Molecule also has extra downloadable costumes, levels, and content available for fans to purchase. The game has prepared a massive set of detailed tutorials, teaching players how to create a level and everything in it from scratch. Users can create their own custom content, upload it into their own designed levels, and share it with others. 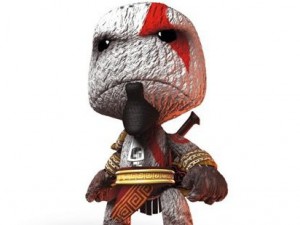 Who says all sackboys are cute? Kratos will destroy you!

The possibilities are endless in Little Big Planet. With all the tools provided, users can create or recreate movies, music, characters, and even games. The game covers almost all aspects of aesthetics that make a game fun and addicting. I’ll leave you with video of a user-created level of the world’s most classic platform game… using the world’s best platform game!