I would like to take this final project from the experience that I learned in project 2 and continue exploring with wave interference. Based on last year blog and my research, I found a definition that could create wave interference surface that looks like this: 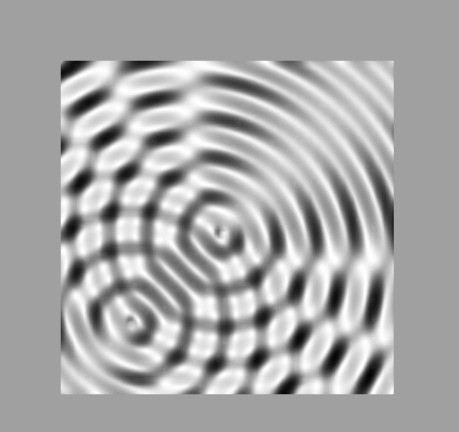 I have been working with the theme about underwater for a while. I usually work with mermaids for the theme, and I think the idea of mermaids fit in the concept of wave interference really well. Since mermaids are a mythical phenomenal creature, both the mermaid and the interference are phenomena that cannot be witnessed easily. In certain way, you could say that they try to hide themselves and not to be witnessed. As you all know, I am a fine art student and I want to create a 5cm x5cm x2cm sculpture, something aesthetic the depicts both phenomena merging together that generates a very rare phenomenon. I want to create a hybrid mermaid that tries to hide away by the interference. To push the concept of hiding further, the mermaid will be facing down at the wave, which is a position of hiding, without showing her face and one of her arms.

Here’s a link of my website to give you an idea about my artwork.

I will model the mermaid in Rhino and use the interference that created in Grasshopper for the base. I will project the pattern on the bottom of the mermaid as well and make them more integrated. I would also like to use Grasshopper to create the texture of her hair.

This is what I have done so far: a water-tight tail and the wavy pattern surface. 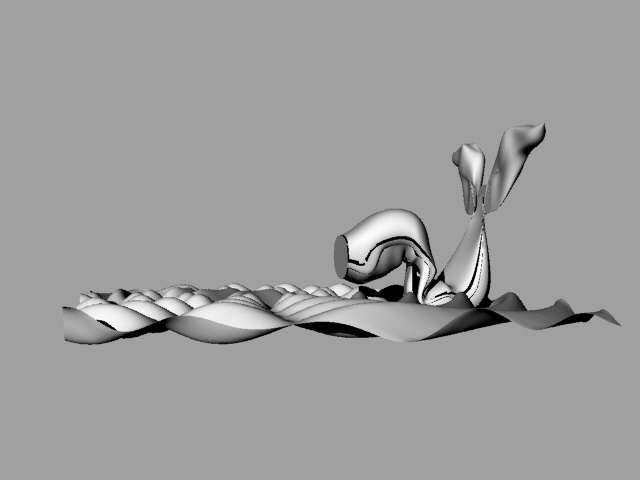 In other words, constructive interference means wave interference. “Wave interference is the phenomenon that occurs when two waves meet while traveling along the same medium. The interference of waves causes the medium to take on a shape that results from the net effect of the two individual waves upon the particles of the medium.”

The wavy pattern is basically cones and piped circles.

Step 1: I used all the bases of the circles to create cones with random heights.

Step 2: I also creates random numbers of circles from the two seeder points and pipe the circles with the same radius.

Here’s the process in Grasshopper. 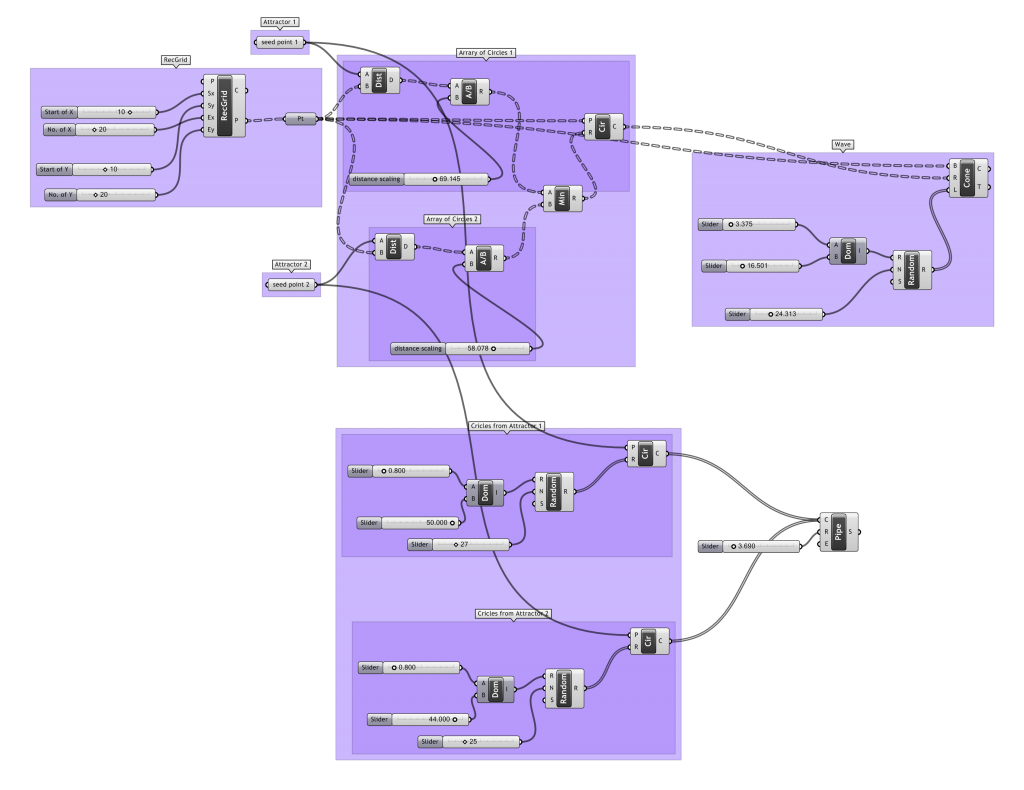 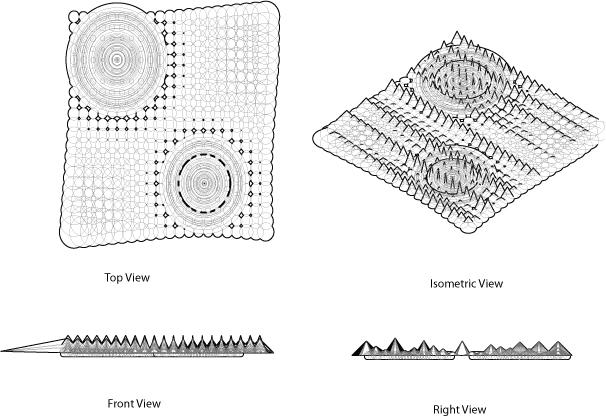 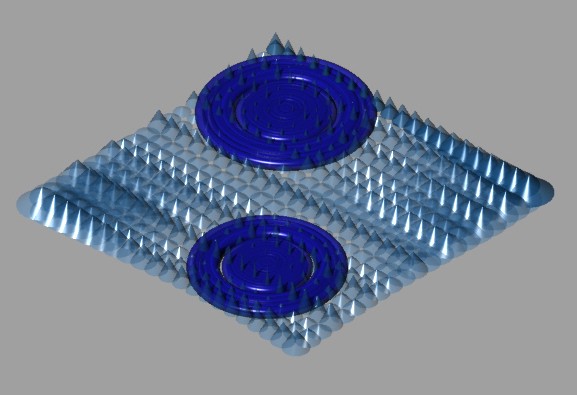 Here’s a video to give you an idea how I played with different outcomes of the pattern:

New Step 1: Created three curved in Rhino, then lofted the surface in Grasshopper.

New Step 2: Divided the lofted surface in different Us and Vs.

New Step 3: Created perpendicular surfaces from the points of Us and Vs for creating cones that flowed with the surface.

New Step 4: I projected the piped circles on the surface to flow with it. 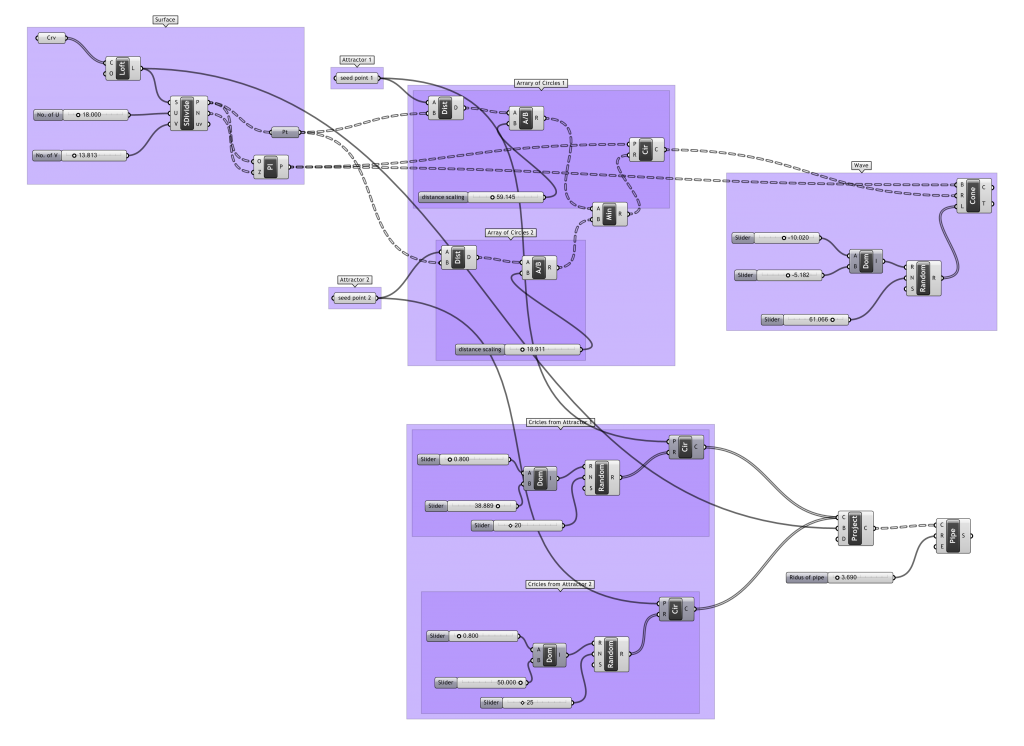 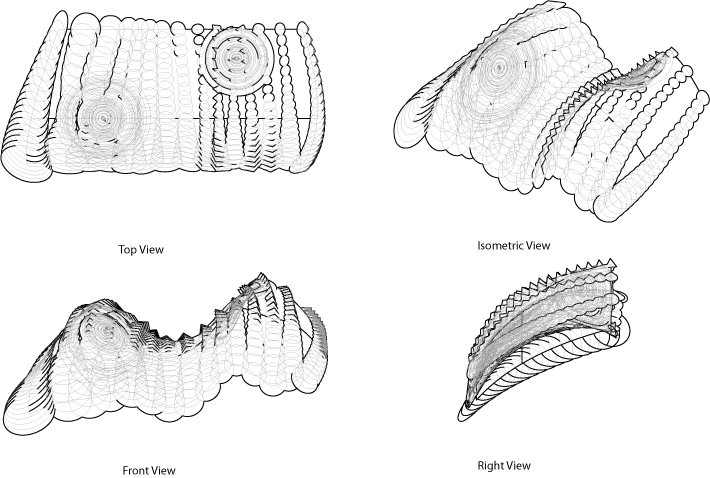 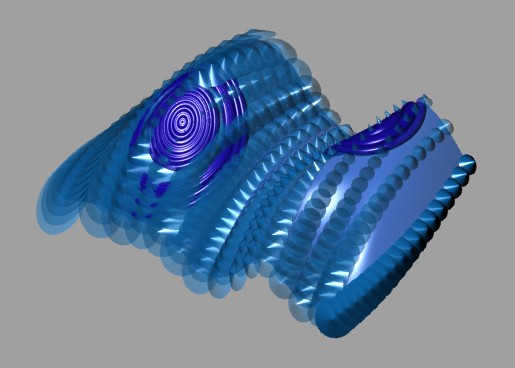 And then I thought, it would be cool if I create a globe with wavy pattern. So, I repeated all the same steps that I made for the surface, and the only difference was I started a sphere instead a lofted surface. 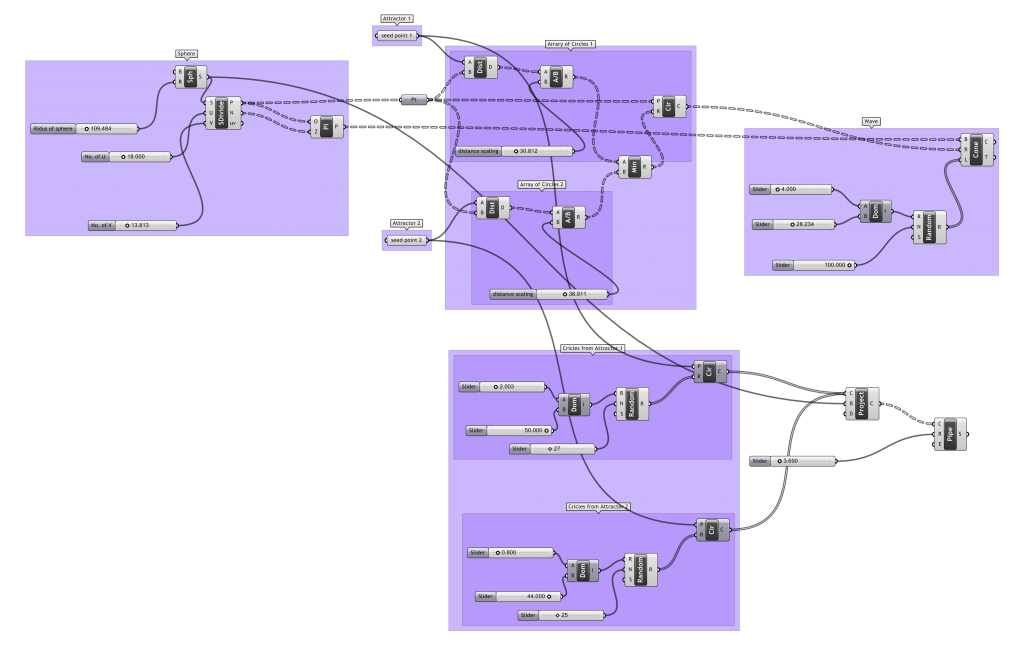 Growing pattern from a sphere:

This object is cool, but it is not so realistic. Therefore, I baked it to Rhino and trimmed it to a flat bottom. I capped all the opened surface and joined them together.

Drawings of the Final Product: 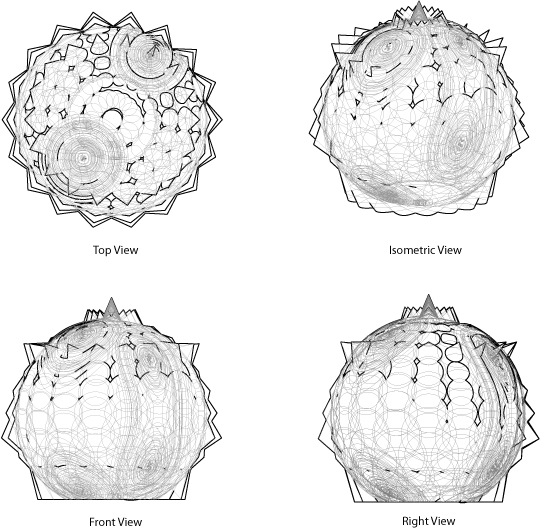 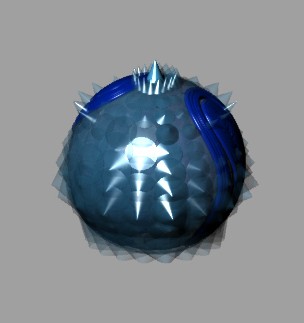 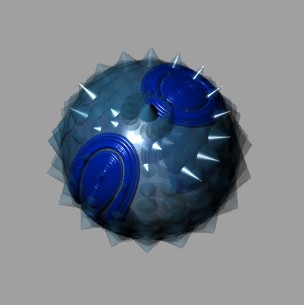 I become interested of how the pressure affect surrounding world and how by applying collected data will be possible to express it graphically. At first my attention drown the simple process of how pressure leave it signs on the objects of every day use . I commit some experiments within parametric world which may explain the visual field of my research. 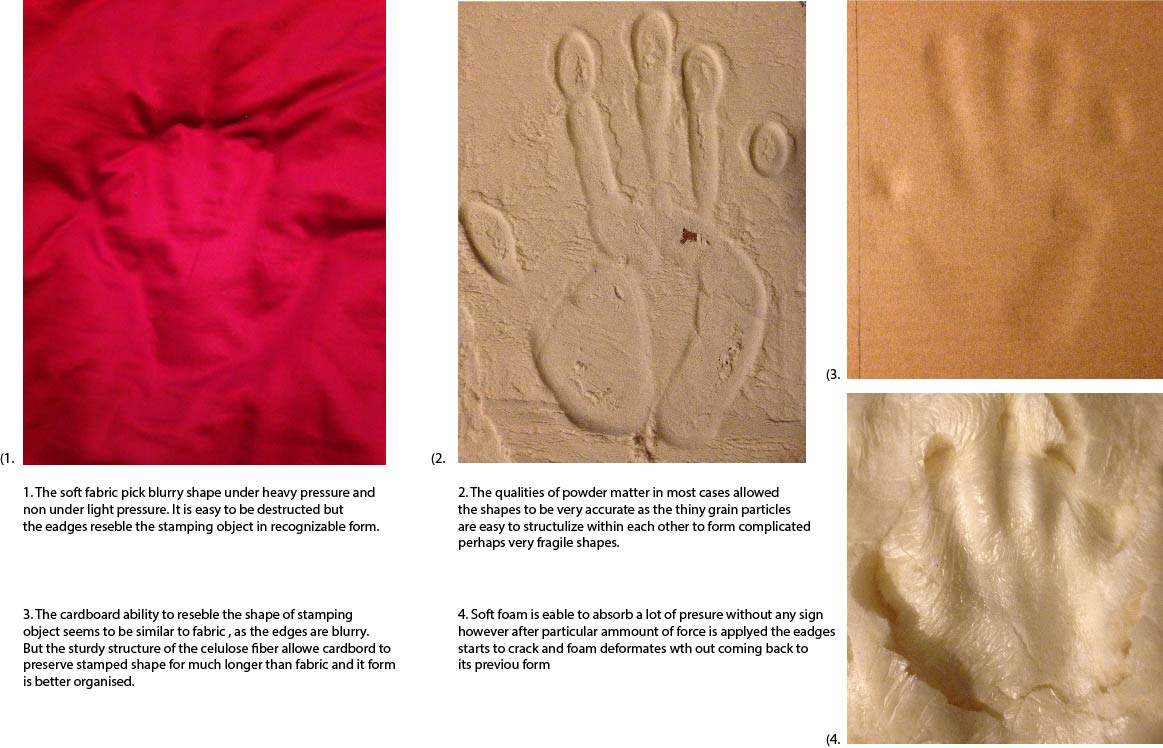 There is also many examples of pressure signs in the nature. Some examples may be the snow or beach foot prints, the animal paths in the forest in which pressure is one of the forces in formation process.

At this point I become search for the way how this phenomena could be represented parametrically. Understanding that in order to presence of pressure lives visible signs must be considered: total area, pressure area and structural differences between those two before and after pressure was applied.

To address those aspects I used knowledge gain from tutorials and build the the matrix where total area and pressure area were separated by the closed curve. 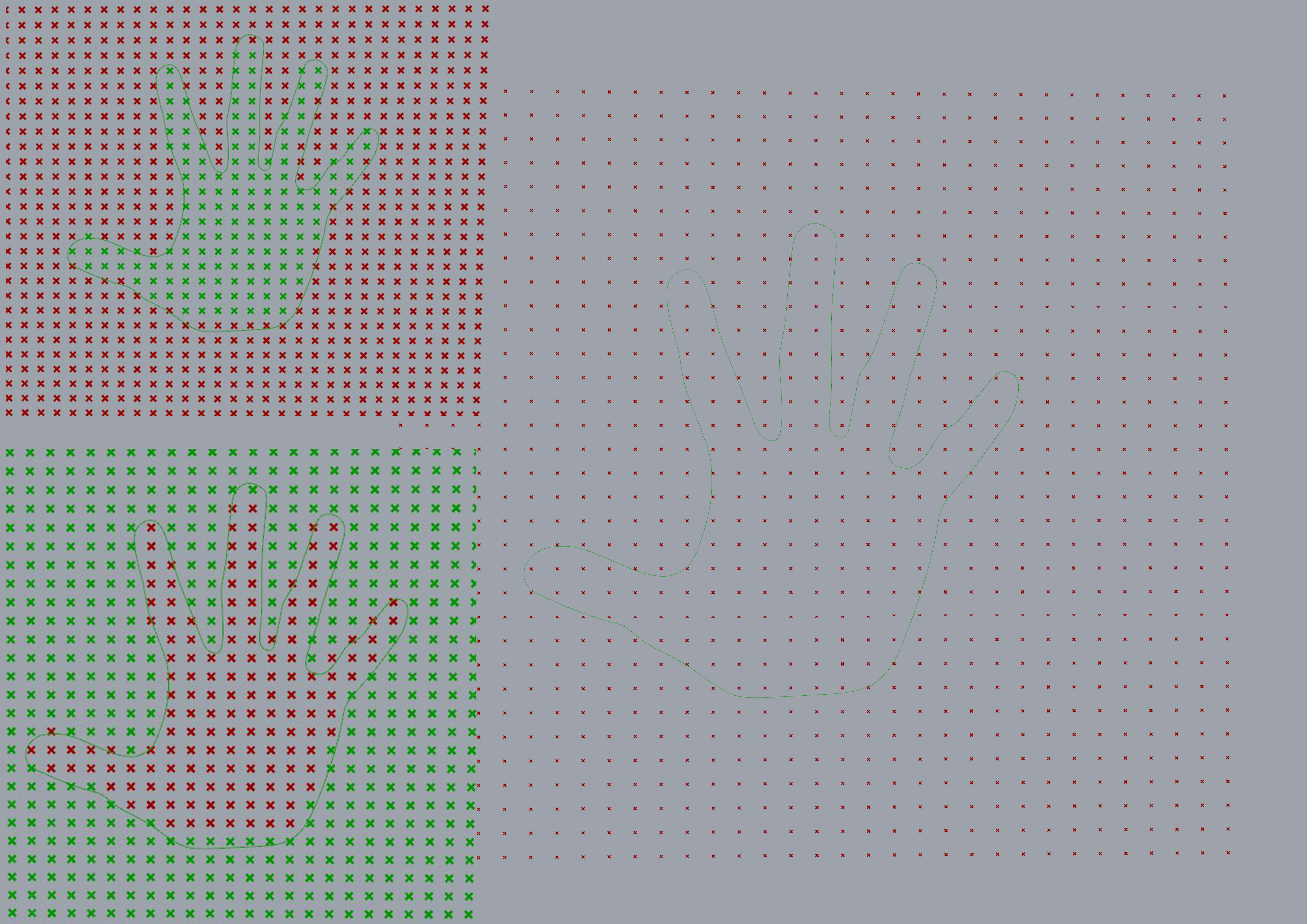 The definition base: Assign surface from rhino – Surface divide -assign curve from rhino – Send “P” points from SDivide to two directions : first straight to Dispatch “L” ; Second to filter “Containment” where the assigned earlier curve become border to distinguish points between internal and external points where 1 is internal 2 external and 0 on the curve.Then I sent them trough “Larger than” so it sent only points I want to the dispatch “P”

This separation of the points allowed me to associate to the internal and external points different graphic expressions. However I decided to live circles as fundamental for both only work with their size adjustments.

Differentiation between circles size allowed to me to build parametric patterns which could resemblance to the forces of pressure factor and signs left behind it.For example the object weight as amount in number could be applied to the slider of radius for internal circles. This will disturb the pattern of internal circles what impact their relationship with the surface circles. Also number of rigidity of surface could decide about overall pattern of the texture of material. Images below represents four different weight which pressure left four different stamps on the surface.

Beginning pastern of surface in rest. 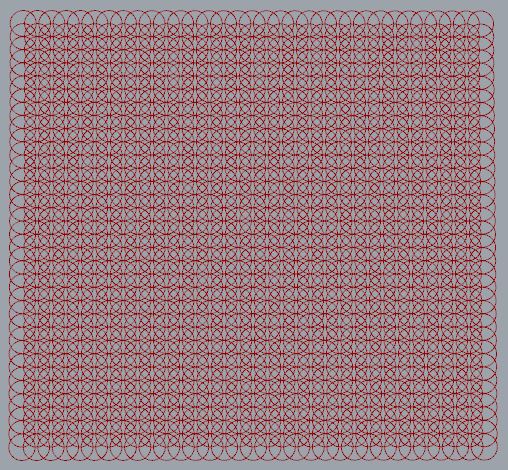 After scrutiny in physical matter of pressure I become to search for more philosophical approach. As the pressure appear to be also psychological matter I try to see how it can be captured by numbers. Is interesting that humans relationships are often characterized by different tensions or pressures.For example the relation ship between couple, siblings, parents and children. There is always some psychological pressure perhaps with good intentions.Parents want their kids to become successful in life, siblings fight about space, couple other things etc.

I choice to look at relation ship between parent and a child. Is very common and long lasting so through the time various data could be collected. for example who call who and how often. who visit who and how often etc. Then collected data from both sides must be applied to some parametrically generated matrix where both sides will affect some part of it. That will create unique structure in response to their relationship following it pros and cons.

Using the previous example I menage to turn points in to the surfaces where first of the curves which separate the points I use as representation of the parent , the additional curve as a child. But in this case I was looking for 3 dimensional deformation of the surface under the pressure. 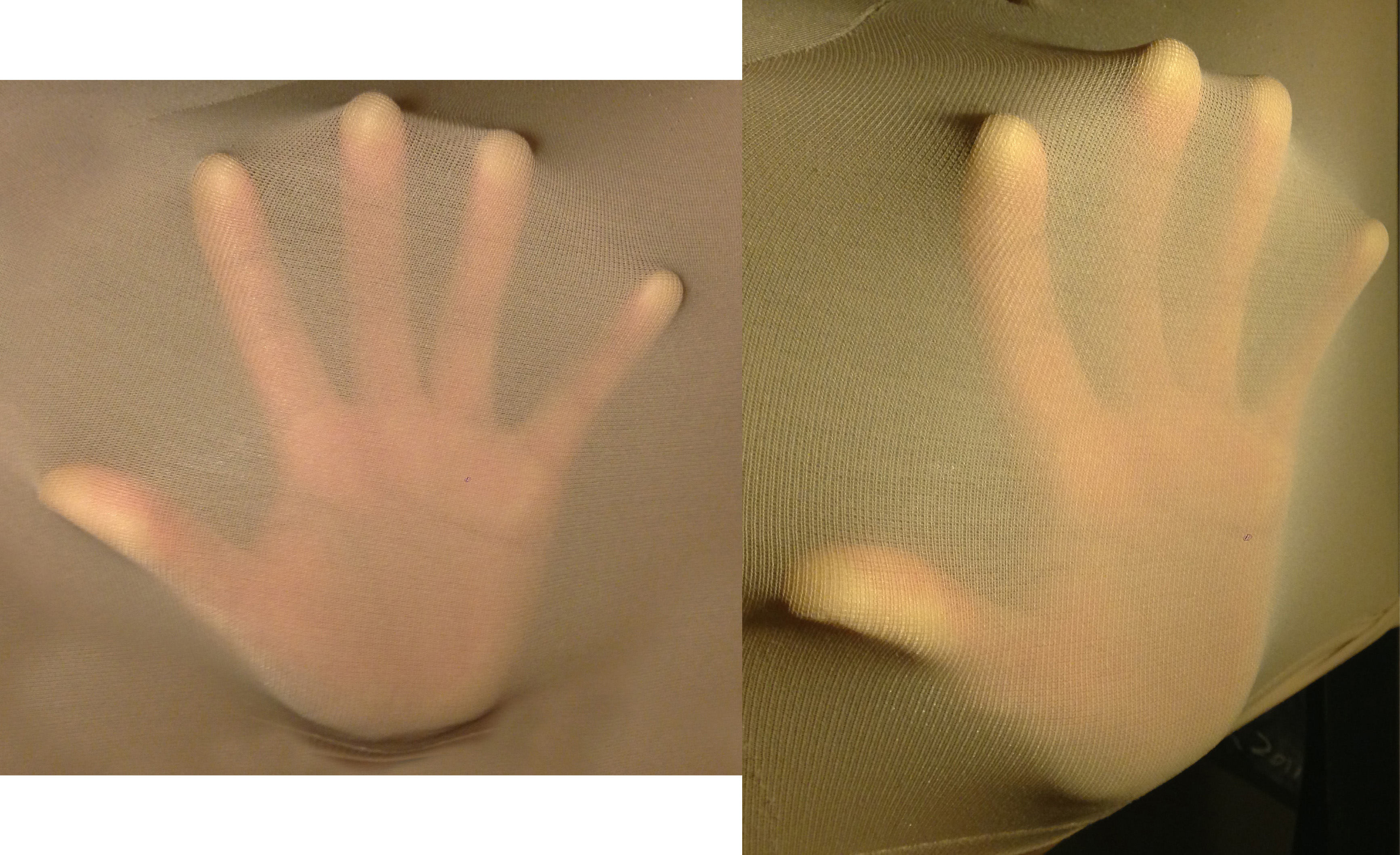 Definition resemble previous one with additional elements for shifting points from they origin but do not break from the surface continuity. 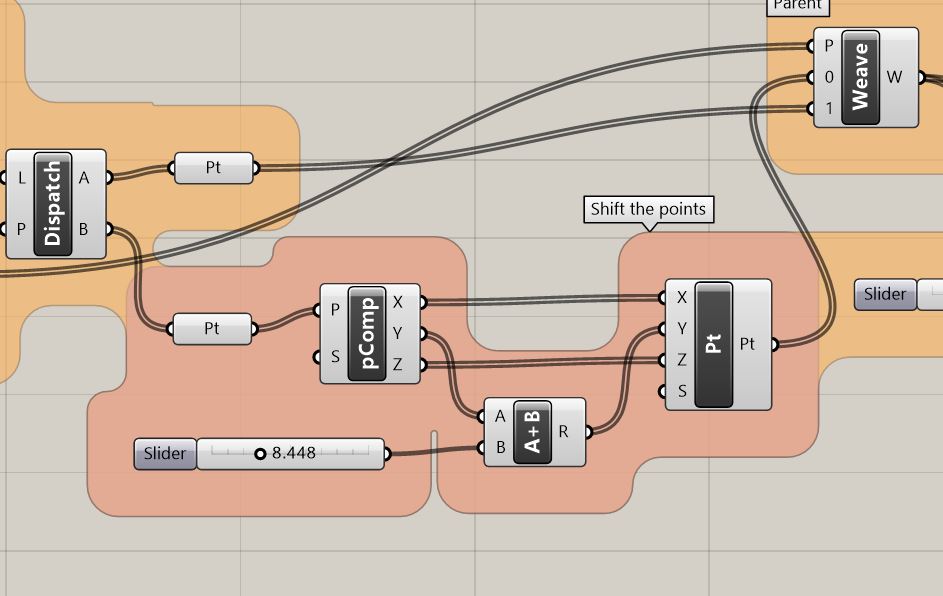 Decomposition element “pComp” allowed me to move points along the “Y” axis from their origin position by additional amount of (“Chosen pros and cons in parent child relation ship”) and keeping them stable on x,z axis. ( Image above)

Next I piped the points from the “Dispatch” component and shifted points from “XYZ” in to the “Weave” component which bring them back together as one matrix.This points matrix serve to me as base for surface  in “SrfGrid” component.

For the child sequence I copy the parent definition and connect to already defined surface upon the “SrfGrid” component. For the curve I used smaller hand contour to symbolize child. 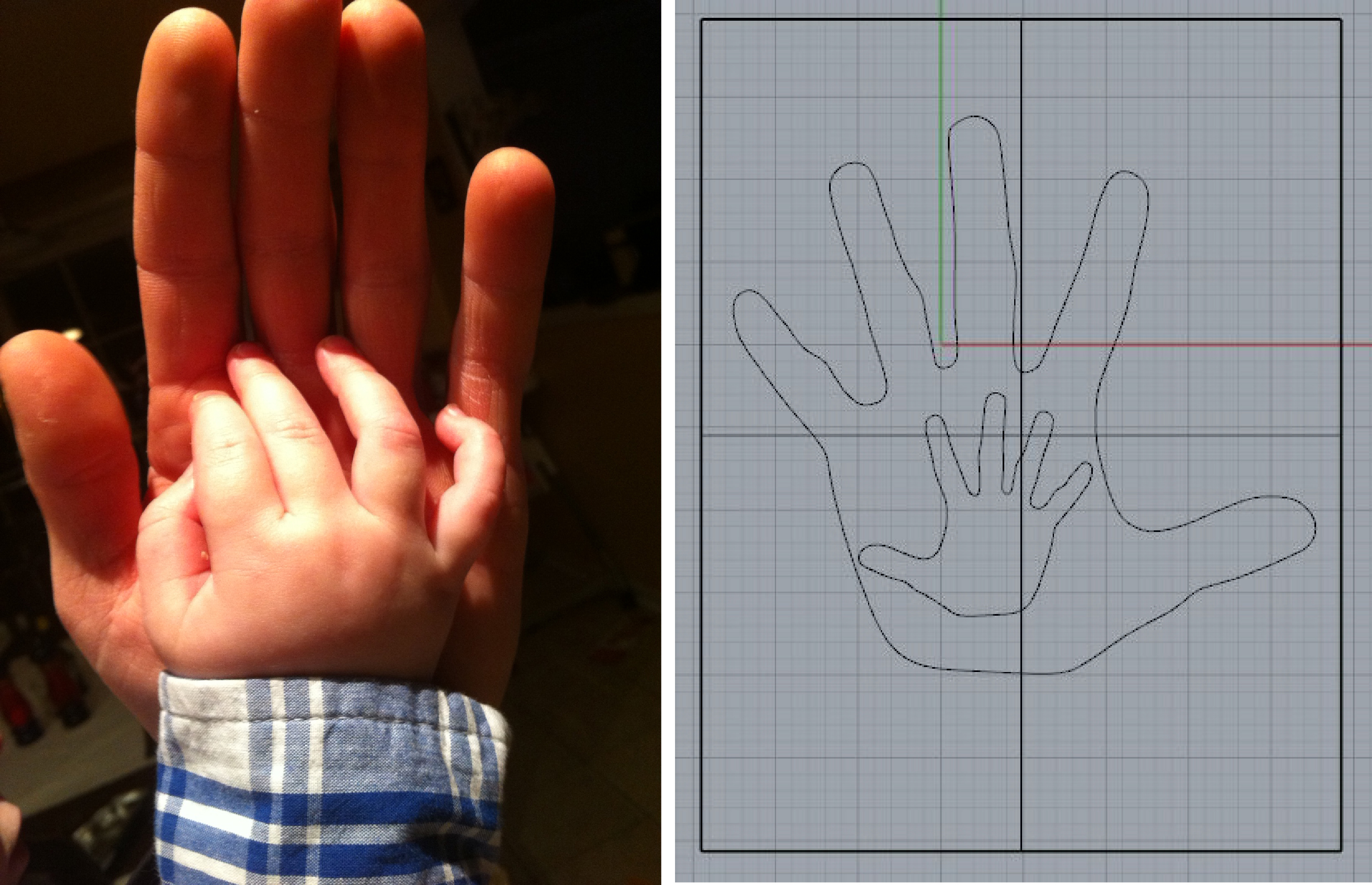 Finally to build precious object I decided to extrude the created surfaces with stamps of both hands in to printable object which could be adapted with little rhino modification to jewelry pendant. I believe that this could be really grate gift from child to the parent, especially to the mother as her fillings to the child are usually stronger. The object could be updated every year with applied changes in collected data what may reflect relationship trough the years. 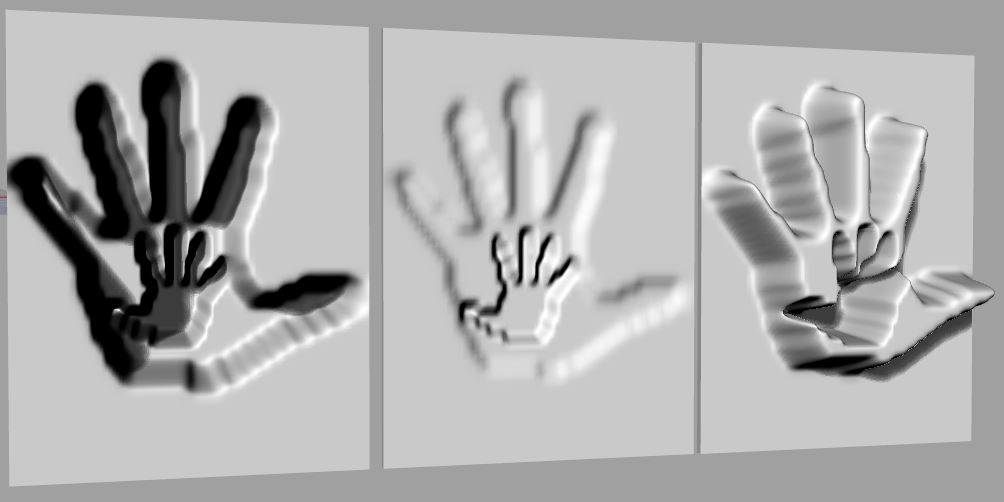 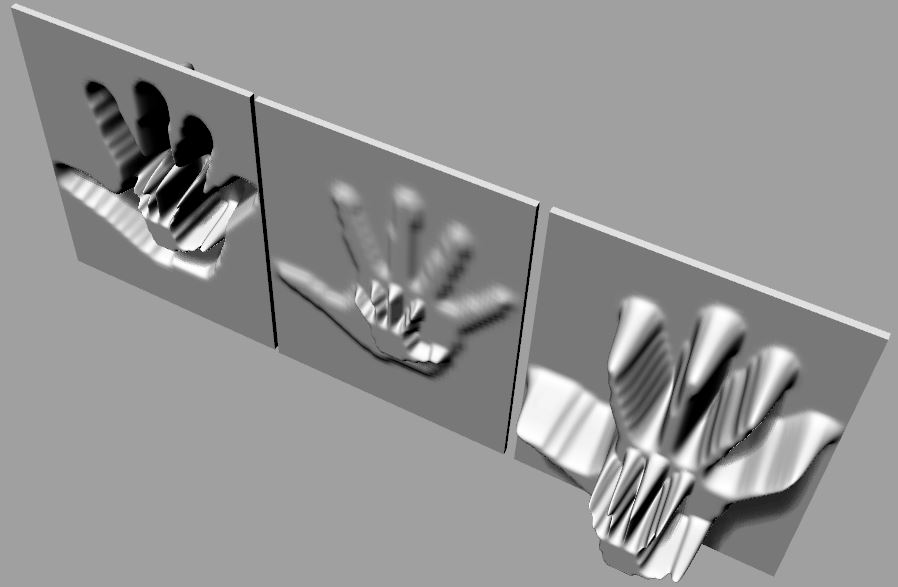 Parametric Expression of Pressure is a concept designed to translate invisible values of pressure in to the reality of physical matter. The radius and length of geometric figures (in this case circles) translates sequences of numbers collected by investigating properties of the materials under pressure in to the physical patterns. Important values considered includes: the sizes of objects, weight of pressing object and strength of pressed surface.

This experiment is very valuable for virtual data representation. It may be used not only to represent simple relationships between physical materials. It perhaps could represent the human relationships. If specific data in form of the numbers is collected it could be attached to the geometric structures in parametric software and will represents characteristics of given relationship by creating very unique patterns. Based on this pattern is possible to create original artifact with very personal values attached to it. This process introduces new way for customized line of jewelry products originated from parametric representation of invisible forces which exist in every day of human reality. This process will also advocate growing technology of 3D printing. And this is most likely the very reason why my object is well align with the main call of “MAKE IT REAL” as it let us touch untouchable.

Printing methods: The ideal will be to print chosen object in silver or have cast in silver or gold. For the presentation purpose MJM 3D printing in Ultra-violet catalyzed epoxy resin should be enough to convey the idea.

An algorithmic design lexicon (or why intent &amp; craft are more important than ever) by Greg J. Smith