– Current Trends in Digital Media in Canada
– Subscription Streaming – the Rise of Netflix, Pandora and Spotify
– A “Dragon’s Den” Style Review of Digital Business Models
– Applying the Metrics of Social Media to the Cultural Industries
– The Future of Niche Titles and Services in a Digital World
SPEAKERS INCLUDE:
Mark Allen, Director, Research & Analysis, CBC

Astra Taylor, author, “The People’s Platform: Taking Back Power and Culture in the Digital Age”

9:40 a.m. Subscription Streaming: New Developments and Business Models: The rise of subscription streaming services like Pandora, Spotify and Beats Music for music and Netflix for TV has disrupted earlier services but given rise to potential new business models. A panel of experts discusses how these models work and their likely impact on the cultural industries. The potential role of the music collectives is also highlighted.

11:30 a.m. Pitch Perfect: A “Dragon’s Den” Style Examination of Alternative Digital Business Models In this session, the audience is presented with a number of pitches for exciting digital media projects in the cultural industry space, with the entrepreneurs describing their ideas, and providing creative, marketing roll- out, financial, and technical details. A jury asks questions and makes comments. Participants will have the opportunity to meet with the members of the jury to maximize the effectiveness of their pitches.

2:15 p.m. “Average is Over” – The Decline of the Niche Title or Service; What Can Be Done? In over-the-air television, the “top 20” programs have devolved to the “top 10”; in specialty television, niche services may be at risk in a “pick-a-pack” world; in film, the mid-budget indie title is in trouble; in books, the mid-list title is imperilled. In a world of unlimited choice, can smaller Canadian titles and services survive the dominance of the blockbusters and the big players? What government policies are called for?

Liv Buli is the resident data journalist for music analytics company Next Big Sound. Liv grew up in Oslo, Norway, but moved to New York to get her master’s degree in Journalism at NYU’s Arthur L. Carter Journalism Institute. Her work has appeared in Newsweek Daily Beast, Forbes, Billboard, Hypebot and more. Next Big Sound is a music analytics company based in New York City that works to uncover insights and provide context for the industry based on social, sales, streaming and event data for more than a million artists. In May 2014, the company announced a new division, Next Big Book, and its first publishing partnership, with

Macmillan Publishers. When Liv is not busy attending concerts and asking too many questions, she is writing data-driven stories about all facets of the music industry.
Astra Taylor is a writer, documentary filmmaker (including Zizek! and Examined Life), and activist, based in New York. Her book, The People’s Platform: Taking Back Power and Culture in the Digital Age (Metropolitan Books), was published in April 2014. In a laudatory review in the New York Times, Tim Wu said “Taylor’s thesis is simply stated… The web never really threatened to overthrow the old media’s upper echelons, whether defined as superstars, like Beyoncé, big broadcast television shows or Hollywood studios. Instead, it was the cultural industry’s middle•classes that have been wiped out and replaced by new cultural plantations ruled over by the West Coast aggregators… “The People’s Platform” has the flavor of a “Roger
& Me” for the American cultural industries, and it will resonate with those in the creative classes who have seen their lives made harder by the web: writers of serious nonfiction, musicians, playwrights, novelists and investigative journalists.”

Special student rate: $34.51 plus 13% HST for a total of $39
Fees include attendance, program materials and a buffet lunch.
For Ontario lawyers, this program contains 5.5 Substantive CPD hours.

To qualify for the student rate: Name of educational institution: Program:
Student Number: 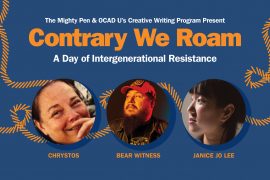 You are invited for a day of intergenerational learning and reflection featuring poets, artists and performers with a shared history of resistance. This history reminds…