An extended run and expanded scope make the 2015 edition of Gladstone Hotel’s Come Up to My Room (CUTMR’15) the best yet. The exhibition – which runs from January 16th to 25th, 2015 – will take over all floors of the 125-year-old historic hotel, showcasing a plethora of design, fine art, craft, landscape design, performance and sound installations.

The exhibition, curated by Jaclyn Blumas, Robert Cram (OCAD U IAMD Student) and Caitlin Plewes, has been running for over a decade and was voted the People’s Choice for the 2014 Toronto Design Offsite Festival. CUTMR’15 will once again play a pivotal role in connecting audience with the inspiring talents who build the foundation of our local community.

The event is free to all and no registration is required. We hope to see you there!

We are excited to announce that our keynote lecture will be delivered by Dr. Matthew Hunter (McGill University) at 4:30 PM on Janurary 22nd. His lecture is entitled:  “Space, Time and Chemistry: Making and Disfiguring Enlightenment ‘Photography’ in the 1860s.” ​

In the early 1860s, an engineer and curator at London’s Patent Museum named Francis Pettit Smith traveled to the British Midlands on a collecting mission. Smith hoped to acquire an early prototype of James Watt’s improvements to the steam engine from Matthew Boulton’s Soho manufactory in Birmingham, which was then slated for demolition. Instead, Smith acquired a remarkable, materially-heterogeneous set of images called “sun pictures” — images reputed to have been produced under Boulton and Watt by photographic means in the 1780s. Propelled by the acrimonious campaign against the sun pictures promptly engineered by Boulton’s own grandson, this paper sounds the conceptual and political stakes of reckoning with “Enlightenment photography,” both in the 1860s and in the present. ​

Matthew C. Hunter is Assistant Professor and Graduate Program Director in the Department of Art History and Communication Studies at McGill University, and Visiting Assistant Professor in the Department of Art History at University of Chicago in Spring 2015. His work explores interfaces between physical materials and cognitive processes — between making and knowing — with particular focus on the arts and sciences of Britain in the long eighteenth century. Co-editor of Beyond Mimesis and Convention: Representation in Art and Science (2010) and The Clever Object (2013), Hunter is author of Wicked Intelligence: Visual Art and the Science of Experiment in Restoration London (2013), which was a finalist for the College Art Association’s Charles Rufus Morey Prize in 2014. His current projects include a collection with fellow Grey Roomeditor Zeynep Çelik Alexander entitled “Moral Instruments: A Secret History of Metals” and a book manuscript called “Fluid Cunning: The Temporally-Evolving Chemical Object in the British Enlightenment” from which the present talk is taken.​

In this informal lecture, artist Diane Borsato will discuss recent works of relational art, performances, video, and photography. For the past decade Borsato has been concerned with social and experiential modes of learning, and has worked closely with various other practitioners including artists, dancers, and amateur naturalists.

Projects include Terrestrial / Celestial (2010) where the artist brought together both the Mycological Society of Vancouver and the Royal Astronomical Society for an event to exchange terrestrial for celestial knowledge. Also Italian Lessons (2009-2011) where Borsato attempted to learn Italian by studying various subjects in a second language including the physics of black holes, basic first-aid, and beekeeping. The activities generated by the works produced new relationships between different groups of people, and proposed alternative approaches to the subjects at stake. And as Artist in Residence at the Art Gallery of Ontario, she produced Your Temper, My Weather (2013), a major durational performance involving the participation of 100 professional and amateur beekeepers for Nuit Blanche Toronto. In this 5-hour piece, beekeepers performed a silent, collective meditation in the main atrium of the museum, enabling contemplation on the health and temper of bees and their keepers, and on the policies and environmental conditions that affect our shared future.

A bio:
Diane Borsato has established a significant national reputation for works in various media, including relational and interventionist practices, performance, video, photography, and sculpture. She has exhibited and performed in Canada and internationally as the Art Gallery of Ontario, The Power Plant, the Art Gallery of York University (AGYU), the Museum of Contemporary Canadian Art (MOCCA), the Vancouver Art Gallery, The National Museum of Fine Arts of Quebec and in galleries in the US, France, Mexico, Taiwan and Japan. Diane Borsato is also Associate Professor of Interdisciplinary Studio at the University of Guelph where she has taught advanced courses in Extended Media, MFA seminars and studio courses that explore the relationships between art and everyday life including Food and Art, and Special Topics on Walking. Examples of her work can be seen at: http://www.dianeborsato.net/

On Thursday January 29th at Koerner Hall, Esprit Orchestra, conducted by Alex Pauk, performs a concert featuring World Premieres of commissioned works by Canadian Samuel Andreyev and British composer Philip Cashian. The programme also includes the Canadian Premiere of a piece by Icelandic composer Daniel Bjarnason and a reprise of a work by Robert Aitken previously commissioned and premiered by Esprit.

In his new work, titled The Flash of the Instant, Andreyev comments that “minutely orchestrated sounds are subjected to constant, prismatic micro-­‐variations. In this music, transitions between one material and another are generally abrupt, the better to highlight the specific qualities of each. Unusual tone colours are created through rare instrumental combinations. More generally, this work is reflective of my life-­‐long quest for a transcendent sonic poetry, on the largest scale I have yet attempted.”

Cashian states that his new work, the world’s turning “continues my fascination with, and exploration of, musical momentum, stasis and the use of mechanisms, patterns, line and repetition in music. My new piece is also a vehicle for the virtuosity of the Esprit Orchestra. The title is borrowed from William Boyd’s novel Waiting for Sunrise in which the main character, Lysander Rief, feels for a moment that ‘time has stopped and the world’s turning also.”

Bjarnason’s Over Light Earth, as described by the composer, “is a reaction to/conversation with/reflection on paintings by Mark Rothko and Jackson Pollock that can be found in the Museum of Contemporary Art (MOCA) in Los Angeles.”

The piece was commissioned by the Los Angeles Philharmonic and Barbican, London and was premiered by the LA Phil New Music Group, conducted by John Adams, as part of the “Green Umbrella” series in October 2012 at the Walt Disney Hall. The work’s orchestral layout aims to create a “stereo” effect with the orchestra’s two pianos and two percussion set-­‐ups being placed as far apart as possible “at opposite wide ends of the ensemble”.

Robert Aitken appears as composer and flute soloist in the performance of his own Berceuse for flute and orchestra. The piece demonstrates Aitken’s impressive knowledge and mastery of the instrument as a performer (including extended techniques) and vivid imagination as a composer. In two contrasting movements, the work is dedicated to the memory of the composer’s father and bears the subtitle For Those Who Sleep Before Us.

Samuel Andreyev, born in Kincardine, Ontario, has lived in France for the last several years. Among other honours, he
was recipient of the 2012 Henri Dutilleux Prize in composition.

Philip Cashian is Head of Composition at the Royal Academy of Music in London. Esprit’s premiere of his newest work
marks the third time Esprit has performed his music.

Daniel Bjarnason, a composer with a burgeoning international career and a strong connection to pop music, is based
in Reykjavik.

Robert Aitken, Artistic Director of Toronto’s New Music Concerts, has had much influence on contemporary music in Canada as a composer, performer, conductor and teacher.
Esprit Orchestra – the world’s turning, Thursday January 29th, 2015

I. Over Light Earth

(In memory of my father, for those who sleep before us)

for flute and orchestra

Samuel Andreyev The Flash of the Instant (World Premiere) 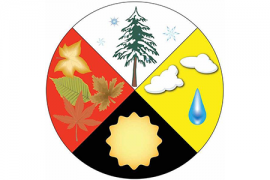 Languages of Sustainability Friday June 25, 9:30am-11:00am Open to all students, faculty, and staff. We invite you into a discussion to consider what is sustainability?… 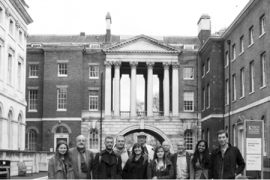