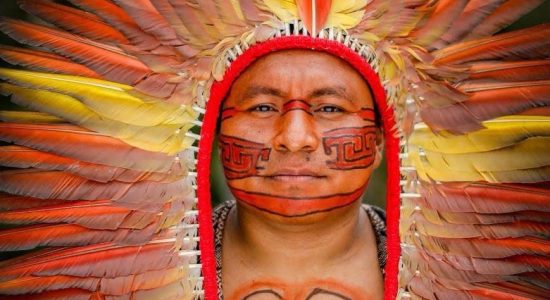 The Arctic/Amazon project is specifically aimed at nurturing dialogical engagement between Arctic and Amazonian Indigenous ontologies while being cognizant of balancing regional knowledges of land-human relations within a globally Indigenous epistemic framework. The inaugural Arctic/Amazon symposium is co-hosted by OCADU and the Power Plant. The purpose of this event is to gather established and emerging artists, curators, and scholars from North American regions of the Arctic and Amazonian zones primarily in Brazil to meet person-to-person to exchange ideas, share works, and to develop collaborative strategies that centralize traditional Indigenous knowledges for the survivance of Indigenous and non-Indigenous communities amidst tumultuous environmental times. In recognition of the inherent connections between Indigenous land, culture, and artistic production, this symposium will address key questions: (1) How might the centralizing of Indigenous cosmologies, traditional knowledges, and the everyday practicalities of living, protecting, and being in relation to respective lands transform Eurocentric artistic and scientific disciplinary approaches to understanding climate change?; (2) In exploring regionally specific responses from the Arctic and Amazon to both human- and non-human-made environmental concerns, what are some of the shared concerns, historical and current commonalities that reveal a globalized sense of indigeneity? The Arctic/Amazon gathering is a starting point to contemplate these complex questions.

The symposium program will take place on September 19 and 20, 2019 at the Harbourfront Centre, Toronto. The two-day schedule will roughly mirror one another. The symposium will begin with Elder Tom Cowie’s welcome, then a presentation of a joint mural created by Denilson Baniwa and Mark Igloliorte. In the morning to early afternoon, a large discussion circle will be facilitated by Indigenous artist-scholars who are part of the Ontario College of Art and Design University faculty. In the afternoon, discussions will break into smaller groups so that the audience and the presenters can engage more intimately with the art practice, with one another, and with the ideas that come forth.

The purpose of the large group discussions is to reflect upon the artistic, activist, and intellectual work that has been accomplished thus far in the artists’ respective communities and regions.

Discussion Circle 1: Land Relations
In this discussion circle, artists will be encouraged to consider human-to-human and human-nonhuman relations with regard to climate change and colonial and non-colonial contact zones. The facilitator will encourage the discussants to share their perspectives as well as raise concerns about addressing land-human relations in times of political and environmental upheavals.

Discussion Circle 2: Land Collaborations
In this discussion circle, artists will be asked to reflect upon how they centralize Indigenous ways of knowing and worldviews to address issues discussed in the previous circle. The facilitator will gear conversations toward ways in which Indigenous artists can support one another through shifts in socio-political duress, future objectives, environmental directives, and land/human relations.The facilitator will engage artists to think about ways in which land-human collaborations, spirituality, ancestral respect, traditional knowledges, and political critique might inform their practices, leading to conversations about a practice-based and lived understanding of a globalized Indigeneity. Key questions include: How can a sense of globalized Indigeneity be built upon dialogical respect and engagement, especially when coming from such faraway places geographically, cosmologically, and politically? What does it mean to collaborate beyond verbal discussions.

In the afternoon, the symposium will break into smaller group discussions. Artists from the Arctic and Amazon will be paired up so that they can provide a more in-depth accounting of their practice and begin to imagine and discuss ways in which their practices reach toward and support one another.

The participants in each group discussion are encouraged to be creative in their presentation in order to best open up a dialogical reach toward one another and the attending audience. Rather than doing a straight-up artist talk, they are very welcome to perform, create small group discussion workshop questions, present actual work (rather than documentation) to facilitate an enriching dialogical setting for discussions.

The main objective of the mural is for the collaborators to meet and visualize the possibilities for building dialogues between the Arctic and Amazonian regions regarding climate change, land-human relations, contact zones, and globalizing indigeneity. What similarities are there in terms of inspiration, lived experience, creative and political intentions? This mural is pivotal in establishing the symposium and the Arctic/Amazon project as a dialogical, collaborative exchange of ideas, dreams, and possible futures.

Artistically driven, the dialogical components of the symposium will be interwoven with performative responses. The performances, along with the mural and dj-ing are integral to ensuring that the Arctic/Amazon project is Indigenous-creatively-led. In subsequent gatherings such as the curatorial shows and conference in the works for 2020, the intention is to integrate activist art-making as a research methodology and political response to the concerns raised. The major impetus for focusing on an Indigenous artist-led symposium is to ensure that Indigenous ways of knowing encompass rather than become subsumed under the structuration of institutionalized disciplinary knowledge. Performative responses provide an embodied approach, an alternative to speech-based collaboration.

The purpose of the keynote dialogical address is to open up discussions about ways to centralize Indigenous ontological approaches to develop interconnections between Amazonian Indigenous and Inuit thinkers, artists, and activists, whose works address issues climate change, environmental protection, adaptation, and colonization through the lenses of art-making and activism. It is hoped that this dialogue will also evoke and inspire the sharing of different cosmologies, values, and reworlding through the entanglements of diverse Indigenous practices.

Following Elder Tom Cowie’s closing, the DJ will bring the house down with one hour of dj-ing to cinch the symposium. The function of this closing to signify the end of this specific gathering while imagining and opening frequencies for future collaborations, creative sharing, and ongoing dialogues. 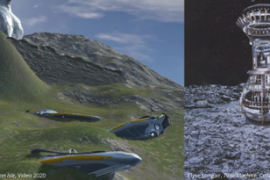 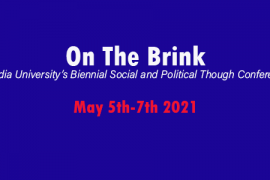