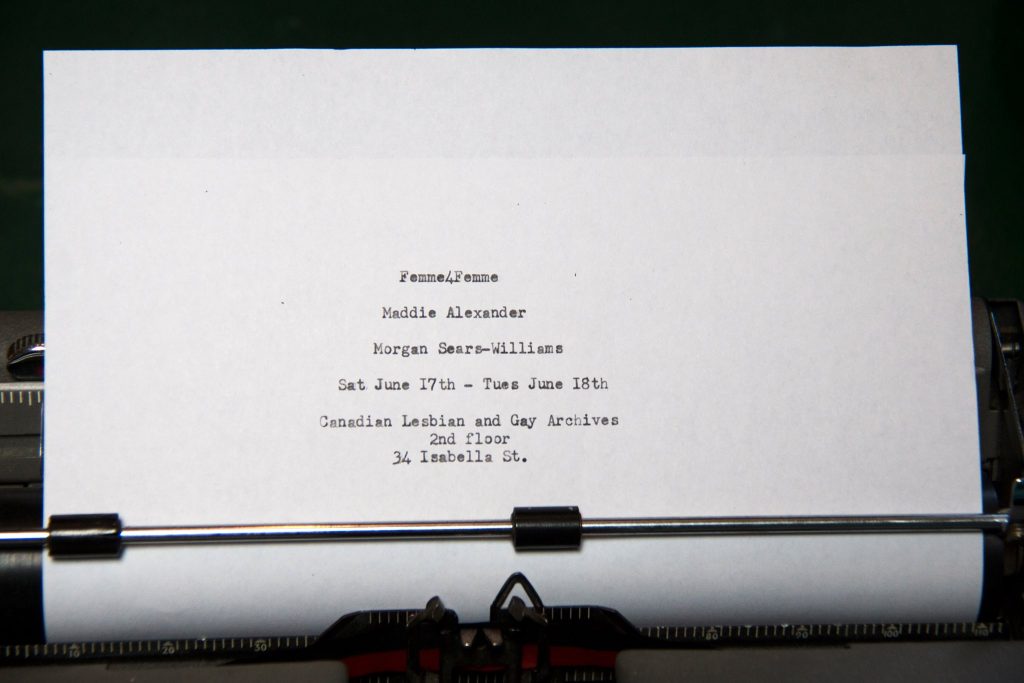 CONGRATULATIONS PHOTO ALUMNI MORGAN SEARS-WILLIAMS (2017) AND MADDIE ALEXANDER (2016) for their upcoming exhibition at the Canadian Lesbian and Gay Archives!

Opening: Saturday June 17th- 7pm till 2am
Femme4Femme is a collaborative exhibition between Morgan Sears-Williams and Maddie Alexander as a part of Nuit Rose Festival – Between Venus & Mars .

Through text, image and installation; the artists strive to explore both the historical and contemporary existence of femme identity. Alexander’s approach pulls from pop culture and pornography, using oversaturated imagery to explore the way queer femmes are represented in the media. Alexander explores micro aggressive language in a satirical manner, to break down the subtleties of femme phobia in film and television.

Morgan uses older technologies as an entry point for viewers to interact with the stories of queer folks both historically and contemporarily, with a focus on queer femme identities. By blending time to create a lasting and long thread of feminist queer activism and lived realities, they challenge the notion that queer feminist activism and femme presence exist within a certain time period.

Both approaches use different methodologies; however work towards a simultaneous goal of archiving the existence of queer femmes. Focusing on and inspired by lived experiences, both works take from contemporary and historical queer presence and absence, and question the roles expected of queer femmes. The works interact with each other to display the efforts of archiving queer life from the artist’s perspective, and the importance of visibility and existence as resistance.