The Photography Program is pleased to introduce alumni Nicky Huber as one of our 2016-17 Production Catalysts Residents! 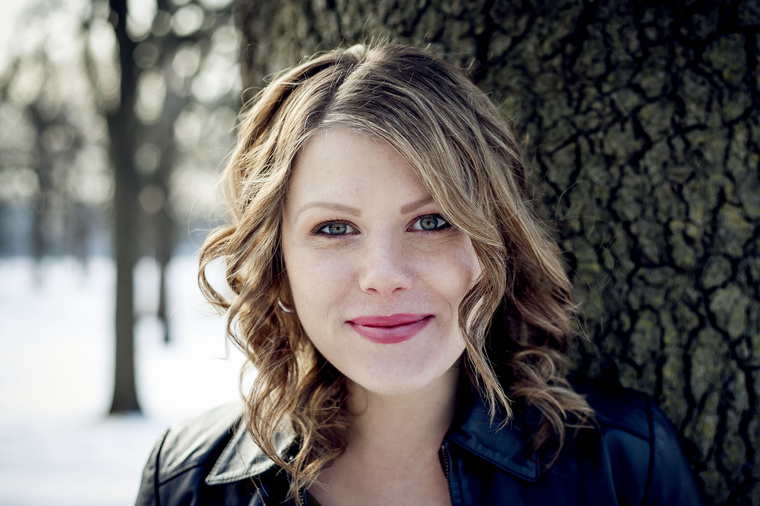 The Production Catalyst visiting artist residency aims to animate the darkroom, support all areas of the facilities, and facilitate the transition to the community and independent facilities. For this program, two alumni artists have been selected to act as resources for students in regards to technical digital and analogue skills, research, the process of production, editing, sequencing, presentation, school/community transition, and other related items. 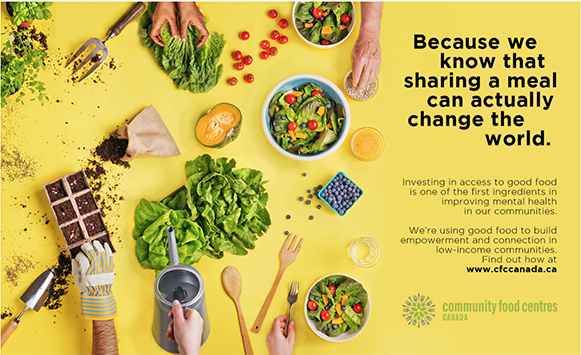 BIO: Nicky Huber is an award winning photographer from Toronto, ON. Growing up in a foodie family it was only natural she would love to cook and bake. She has taken her love of culinary arts and her artistic ability and blended them into food photography and styling. She holds a BFA in photography from OCAD University. 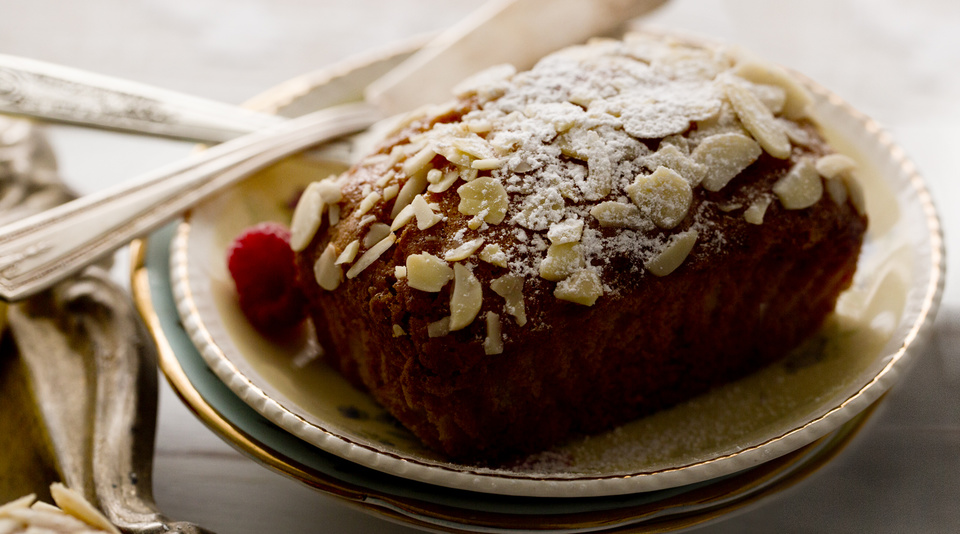 Congrats to Photo Alumni, Allison Morris on another feature in Vogue Italia! 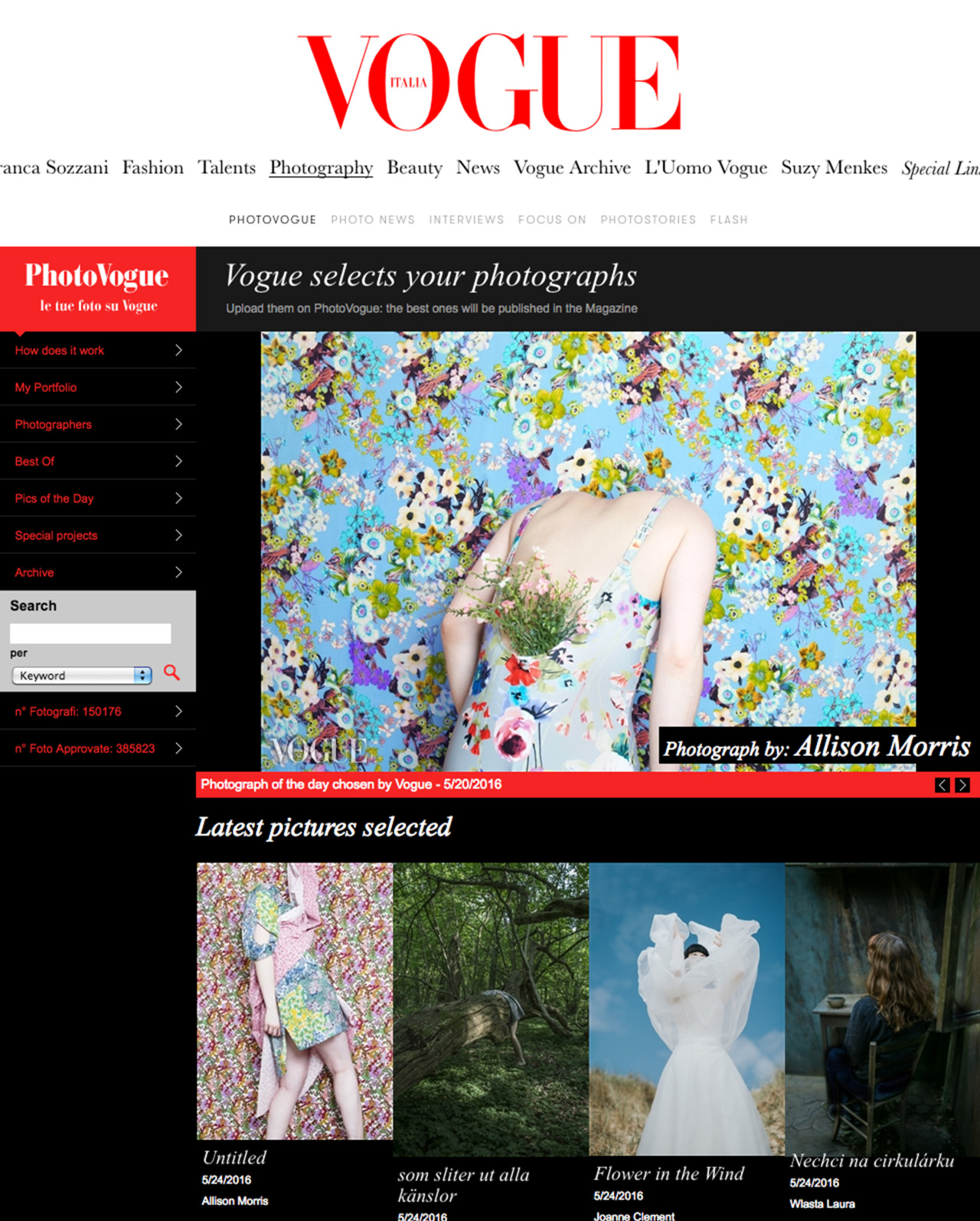 BIO:  Allison Morris is an emerging fine art photographer living and working in the Greater Toronto Area. She has exhibited in Toronto, Ontario and Florence, Italy. Allison has recently completed her Bachelor of Fine Arts in Photography at the Ontario College of Art and Design University, and spent her third year of study abroad as part of OCAD University’s Off-Campus Florence program in Italy. 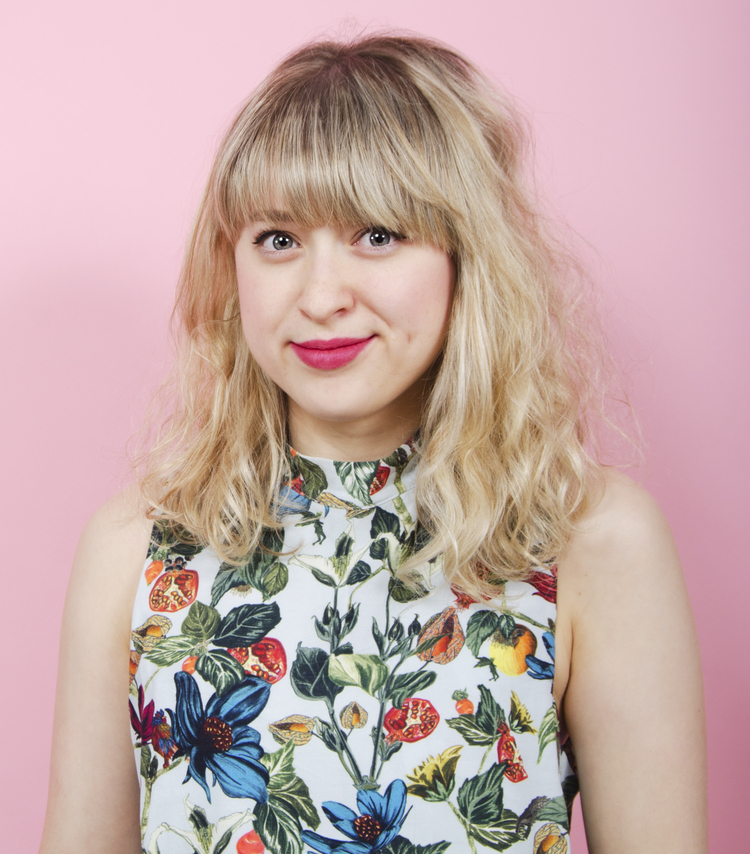 Allison’s artistic practice explores themes of female representation, the construction of femininity, beauty, youth, identity, and performance from a feminist perspective. She uses self-portraiture as a tool with which she can control her images and challenge the male gaze by consciously performing for the camera and herself.

Congrats to  2016 Photo Grad, Heike Reuse on landing her dream job photographing wildlife in Rouge Park!  Check her out on CBC’s  Metro Morning! 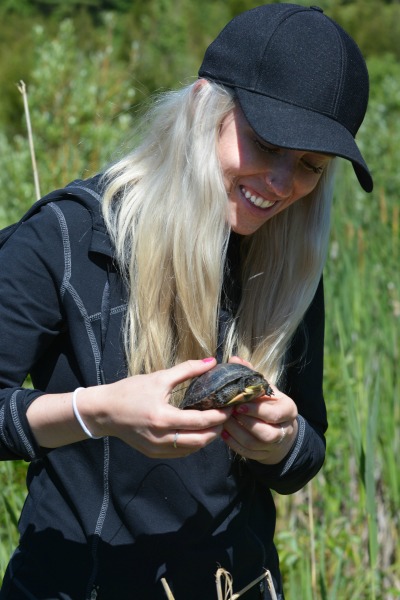 As the Park’s first  resident photographer, Heike will spend the summer on the park’s trails, documenting its landscapes, wildlife and the visitors who come to escape the city just beyond its borders.

You can read more about the Heike’s residency experience in this feature by the Metro.

BIO: Heike Reuse is a Canadian-based landscape and wildlife photographer, with a curiosity for urban exploration. After receiving a BFA in photography at OCAD University, Heike has been pursuing a photography contract with Parks Canada. As an artist, Heike is fascinated by wildlife and the idea of nature as an unstoppable force. She predominantly shoots landscapes, many echoing a theme of industrial abandonment or exploration and rediscovery of forgotten spaces. For Heike photography is not solely about the image, but also the thrill of adventure and exploration of the natural world. 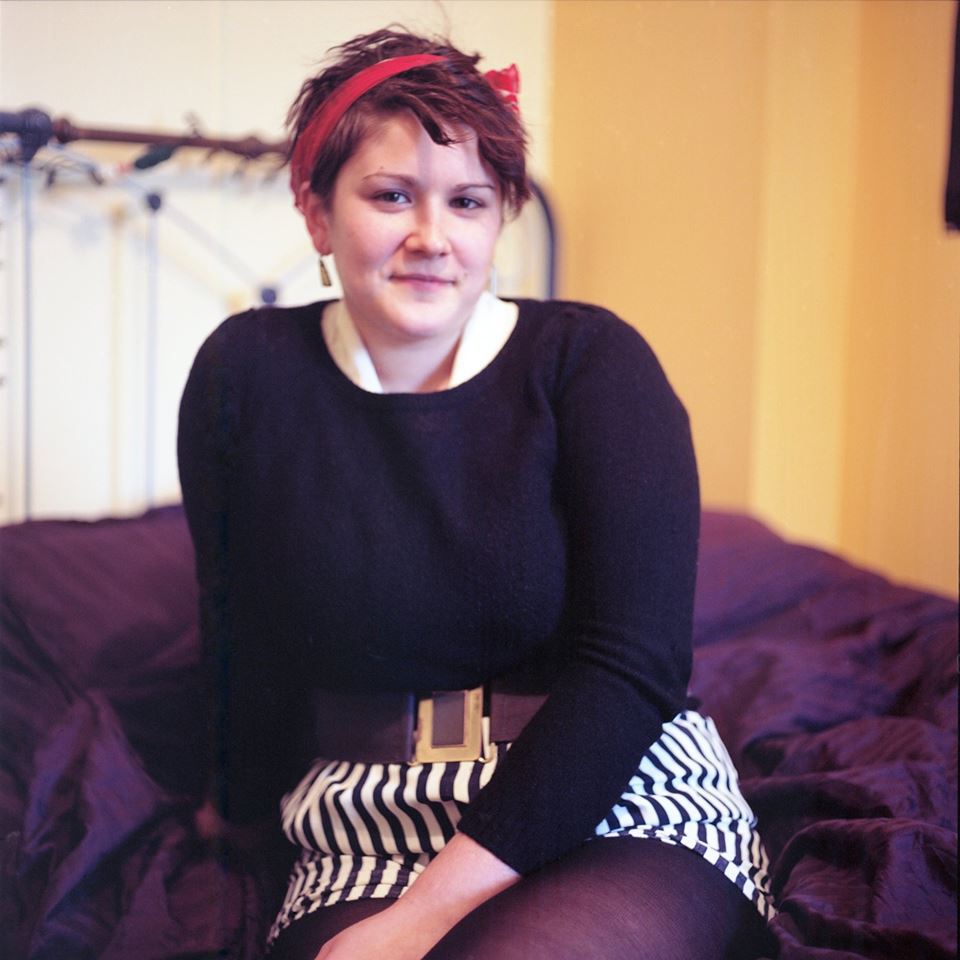 BIO:  Morgan is a Canadian-born visual artist currently working and living in Toronto, and attending OCAD University. Her art practice explores and is influenced by feminist and queer movements, contemporary and intersectional feminist art practices and archiving, and interpersonal communication. Experimenting through zines, artist books, and lens-based works, She explores interpersonal relationships, queerness and erasure, online sexual harassment and violence, and disability. Storytelling is a common tread in her work, where she is a facilitator rather than a narrator, focusing on the voices of the individuals in my work who can speak to their personal experience. 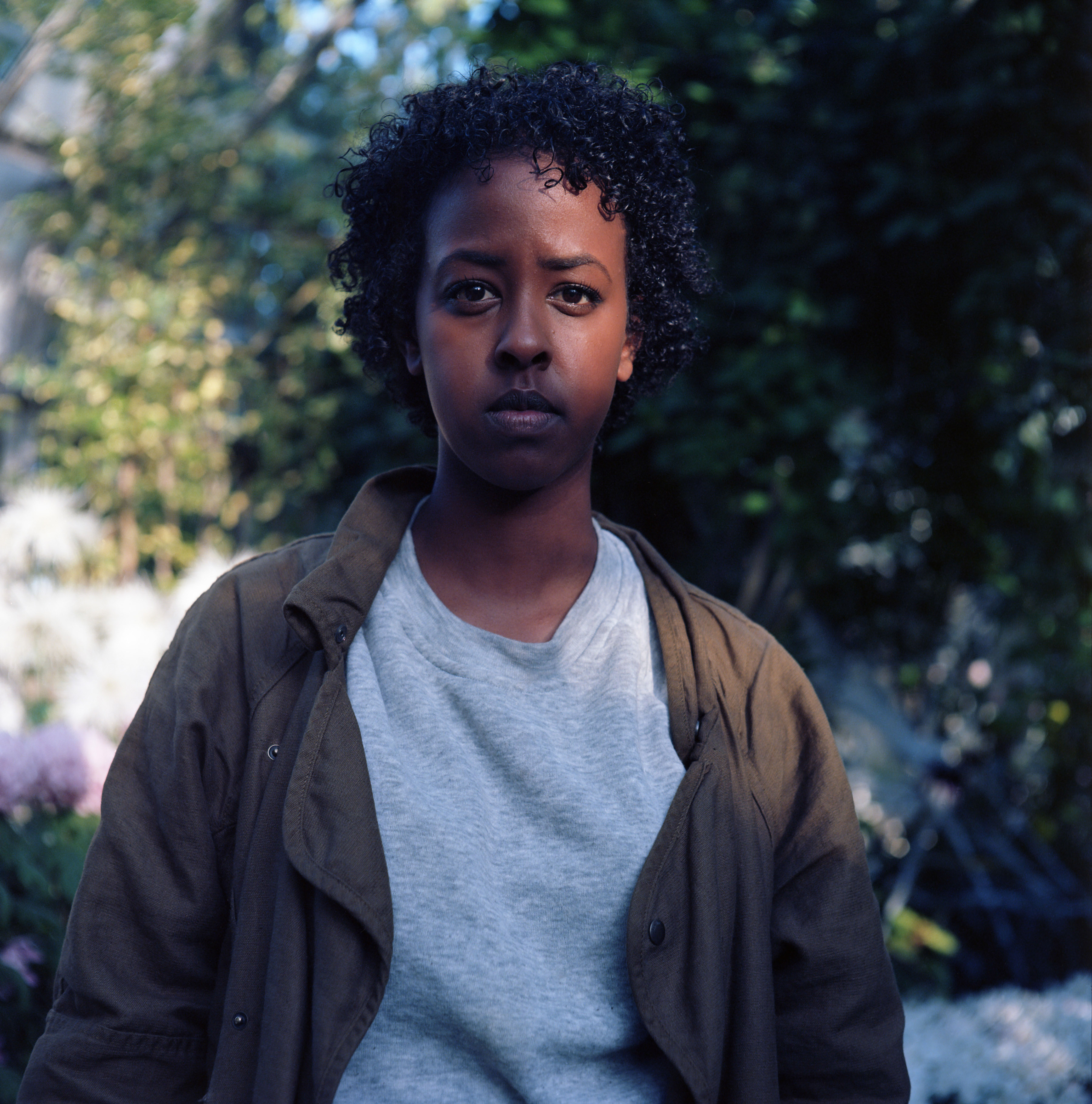 Congrats to Photo Alumni Melissa General on her upcoming exhibition: 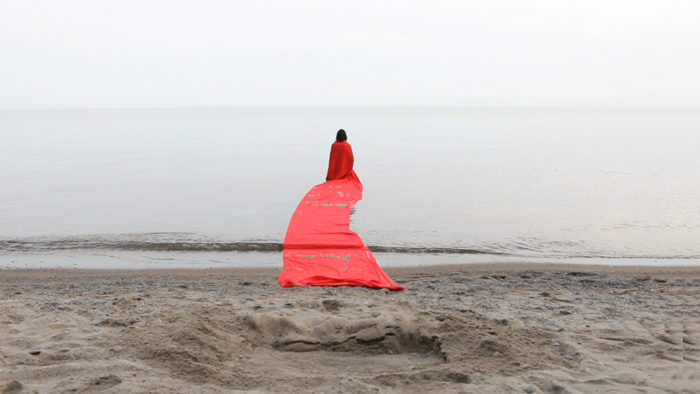 Featuring artists Melissa General, Kristina Guison, Trudy Erin Elmore, Anna Eyler, and Safiya Randera, this exhibition encounters Nature as a medium for creating options in relation to the established socio-economic order. From the physical movement of bodies from one place to another, through the regenerative qualities of fire and water; to expanded virtual landscapes and digital subjects; these artists engage with the elements of nature to alter, transfer, move, and reorganize established social systems or prescribed modes of thinking and acting. In resisting the naturalization of socio-political hegemonies, these works find in the earth the tools to rethink our histories and futures.

Bio : Melissa General is from Six Nations of the Grand River Territory. She is a graduate of OCAD University and completed a Masters of Fine Arts degree at York University. Working in photography, installation and video, concepts involving memory, history, land and her Indigenous identity have been a focus in her practice. Her work has been exhibited at The Robert McLaughlin Gallery, Harbourfront Centre, Art Gallery of Peterborough, Gallery 101, Gallery 44 Centre for Contemporary Photography and has been included in the 2016 Contemporary Native Art Biennial in Montreal. 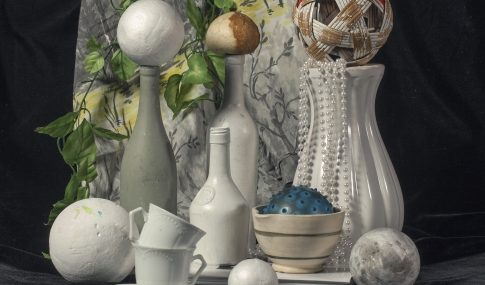 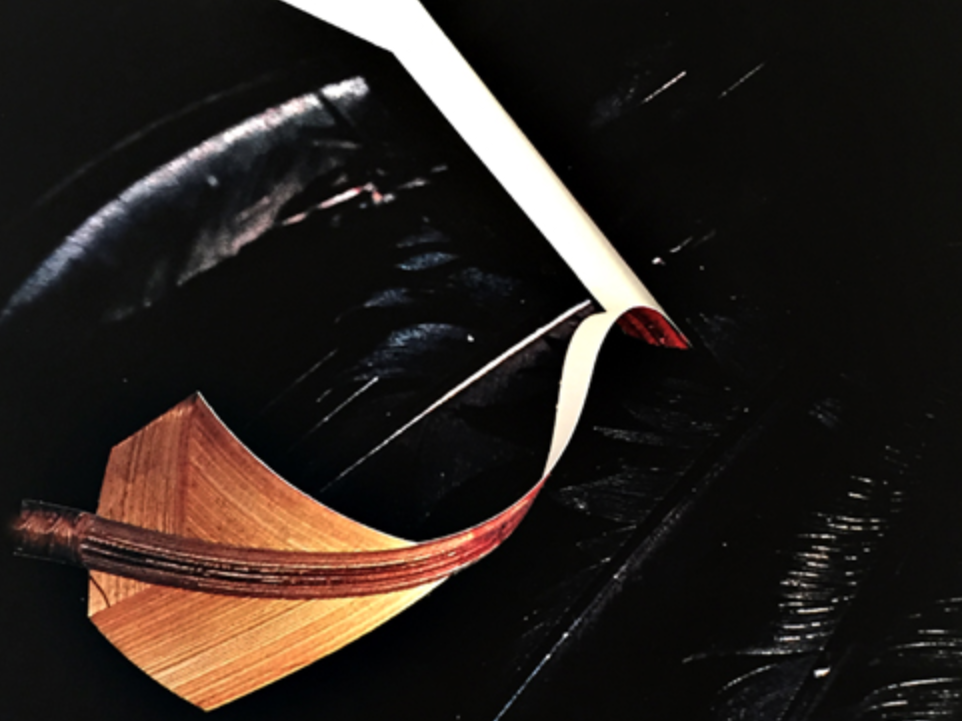 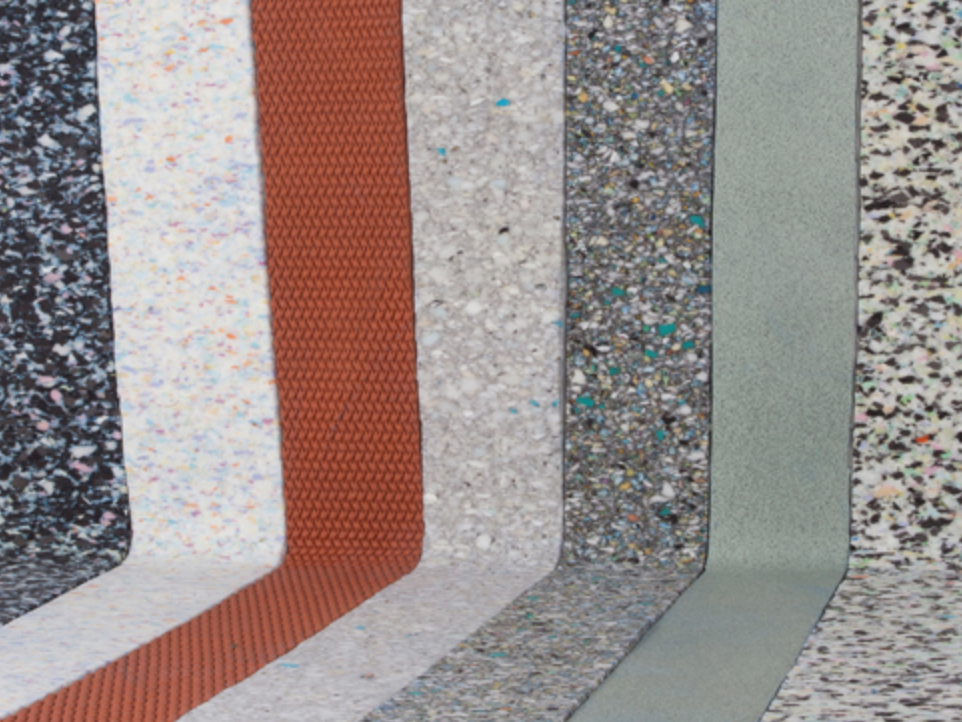 OCAD U offers work- and community-integrated learning opportunities in a number of exciting ways. Field Placements and Independent Studies can supplement your learning, help you to develop professional skills and expand your network, all while working towards completing your undergraduate credits!

What is a Field Placement?

Each student has individual strengths and interests that would enable him or her to perform jobs outside of the defined program areas. For example, students have held positions at galleries such as Gallery 44 and Prefix Gallery, various Magazines such as Flare, and worked individually with professional artists.

Please note: The Experiential Learning Placement Program has eliminated the step of submitting a project proposal**

**Specific dates may be updated** Please check online at http://www.ocadu.ca/academics/field-study.htm for updates or contact the Office of the Registrar (ext. 235), or Experiential Learning Program Coordinator (ext.3844)

***For more information or to apply for a Field Placement or Independent Student, you can contact the OCAD U’s Experiential Learning Program Coordinator:

Navigate Paris’ urban change from the 19th century-today, trough the eyes of Charles Marville, Eugène Atet, and Peter Sramek on your iPad! Search Marville or Sramek in the Apple App Store.