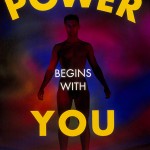 This track is culled from the audio installation that I was producing at the time of Rob’s death – for an installation that we were collaborating on at the time. The installation was tentatively titled The Eternal Cosmic Love Machine, and addressed the moment of transformation from life to death. I recall Rob’s joking suggestion that the show might alternately be titled Rob’s Theatre of Blood (said in a mock horror movie accent).

“Rob’s Dream of the Inspirational Vibration” is named for a dream that Rob told me about on a number of occasions. The dream first occurred when Rob was travelling in India, with his close friend Tim Guest. In the dream, Rob is floating, horizontally in a circular path around an arena or stadium where a large mass of people are gathered. They are watching him float above them, cheering and waving. He is emitting beams of healing light from his wrists that wash over the crowd, dosing them with wellbeing and love as he passes over.

This track is included in This Is True To Me, the bookwork w audio CD that was produced/published by The Eternal Cosmic Love Machine Collective (Kathryn and Brian Brownlie, Julie Gibb, John Flack, Christian Morrison, AZ) during the 12-month period following Rob’s death.

There were two collectives operating in that calendar year (November 1993 to November 1994): the ECLMC and the Rob-O-Rama group – each producing an exhibition and publication to mark the one year anniversary of Rob’s death. The ECLM presented at Cold City Gallery with the show, This Is True To Me, and the other group—including Stephen Andrews, Alan Belcher, Carlo Cesta, Andy Fabo, Janice Gurney, Micah Lexier, Regan Morris, Lisa Neighour, Andy Patton, David Rasmus, Chrysanne Stathacos, Julie Voyce, and Robert Windrum—exhibited Rob-O-Rama at YYZ. I performed a live “remix” of material culled from This Is True To Me at the opening of the Cold City show.

(image: Power Begins With You by Robert Flack, a full-colour poster project intended for public hoarding in the city, 1991-1992)