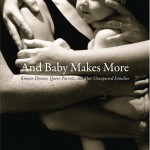 I look up from the floor of the pharmacy, where I am trying to prevent my nearly-two-year-old son, Rowan, from stripping the shelves of their contents. He has an ear infection, one in a seemingly endless series of ear infections this fall. We’ve just come from the doctor, and now we’re waiting for the prescription.

I locate the asker, a burly, bearded, young guy in a hunting jacket, and I’m about to answer him, when I realize that his question wasn’t directed towards me. Rather, it’s been lobbed over my head to Rob, who is waiting with us.

Rob is not prepared for this. He fumbles the question, and misses. It hits him hard in the chest and then shatters and begins to drip — warm, wet — down the front of his coat and puddle in his shoes. He looks like a deer caught in the crosshairs of a rifle sight. He begins to stammer an answer, but is obviously too panicked to come up with anything coherent.

“Twenty-two months,” I tell the guy, who glances at me briefly and then beams at Rob in what I can only assume is a guy-to-guy — a dad-to-dad — bonding kind of way.

“My little guy is 16 months,” he tells Rob, who has regained enough composure to smile weakly and nod. “But he’s big! About his size.” Hunting jacket gestures towards Rowan, who has moved on to the homoeopathic stress remedy section. More nodding and smiling. A bit of toddler small talk until we get our prescription and make our getaway.

Of course, I think to myself, this guy thinks that Rob’s the father. He thinks we’re the parents.

And then I remember: Oh yeah, he is. We are.

Moments like these come up all the time these days, and we don’t seem to be getting any more graceful at handling them. By “we,” I mean me, Rob, and my spouse, Rachel. If I try to strip things down to the barest, most rudimentary, of facts, the story would go something like this: Rachel and I wanted kids. We needed sperm. Rob provided. I got pregnant, had a baby, and a couple years later we did it all over again. And now there are these two beautiful boys, Rowan and Isaac. And they have two mothers. And a … Rob.

Beyond that, depending on your perspective, things either get a bit murky or are crystal clear.

It’s not that we’re embarrassed or ashamed about the situation. It’s not even that we’re scared of the responses we might get. It’s just that it’s taken us a while to come up with an easy way to describe the situation in those blink-of-an-eye, waiting-in-line-at-the-pharmacy encounters. And so we stammer and nod and smile, stumbling along to the steps of the parental dance of recognition, searching for a language that somehow describes three partners instead of the assumed two.

On the surface, things seem relatively simple. Rachel and I are the primary parents, the hands-on, day-to-day people who live with the children, make the decisions about their lives, provide the bulk of the care and the discipline. We’re the ones on call 24/7, the ones — as we all agreed at the outset of this process — with all the rights, all the responsibilities. When we fill out forms, our names go under the slots for “parents” (or, maddeningly, “Mother” and “Father,” which we cross out and replace with “parent.”)

Rob is a man who went from being a friend on the further reaches of our circles to dead centre. He flew across the country for successive rounds of insemination, then for a baby shower, then to visit that baby as a newborn, and then every few months until a job opportunity opened up and he arrived to stay for a year, during which time we conceived and I delivered a second child. During that year, he saw us — Rachel, Rowan and me — several times a week. He’d come over after work and roughhouse with Rowan in the basement while Rachel and I made dinner. Or he’d make dinner, arriving with groceries and Haagen Dasz and elaborate plans. He’d use every pot we owned, and then stay to help clean up while one of us put Rowan to bed. He babysat. He set up intricate toy train tracks on our living room table, and helped Rowan navigate the cars around them. He made lattes and Pillsbury cinnamon buns every Sunday morning, and Rachel and I ate them on his couch while he and Rowan made forts in the bedroom. The day Isaac was born, a Saturday, Rob — so anxious — took Rowan for the day (and even managed to get him to nap) while I laboured at home with Rachel to support me. And when the baby arrived, we called Rob first to tell him the name: Isaac Robert.

Which is to say that somewhere along the way Rob became our family.

But did he become a father? A parent? Or was he one at the outset? And how do you explain it all to the guy in line at the pharmacy?

Something jaded in me notes that so many so-called “traditional” fathers play the same role as Rob: show up for a year, or a month, or a week, or for dinner; roughhouse with the kids for an hour or two before bed; take them to the playground for the afternoon. They come and go according to the various forces — jobs, love, demons, desires, obligations — that shape their lives. And therein, perhaps, lies the difference between the boys’ mothers and their Rob: for Rob, Rowan and Isaac are cherished, but only one of the many forces that shape his life at a practical level. For me and Rachel, Rowan and Isaac are, at least for now, the central force.

And that’s okay. We and Rob agreed to nothing more — in fact, much less — at the outset. He never wanted to be a parent, has carefully refrained from offering his opinions or advice on the decisions we make, has never tried to suggest that he is an equal partner in this endeavour. Every visit, every hour of babysitting or roughhousing, every meal we share, every drink that he and Rachel and I pour at the end of the day when the kids are finally in bed — each of these acts has come about as part of its own, organic process.

But what does it mean?

If I could put it all on a T-shirt, I would. Instead of, “I’m with stupid,” and an arrow pointing at Rob, I could have, “He’s the donor, not the father. Sort of.” Rowan and Isaac have both outgrown the baby onesie that declared, “I ♥ MY MOMS,” but maybe we could silkscreen up new messages for them, things like, “My father is my other mother,” or “We’ll discuss later what to call our father,” or “Nobody knows I’m the child of two moms (and their sperm donor).”

Of course, none of those does the situation justice, either. And, frankly, how much information is too much information? I mean, all the guy at the pharmacy wanted to know was Rowan’s age, not his provenance. More to the point, I sometimes wonder who died and left me in charge of policing other peoples’ interpretations of my family, “correct” and otherwise. Why do I care?

Because I do care, apparently. Not all the time, and not in every moment, but every so often it creeps up on me or hits me full in the face, the weight of all this invisibility, the way people work so hard to see what they want to see. Me and Rachel: Sisters? Two friends out with the kids? The “real” mom and the inconsequential one? Me and Rob pushing the stroller: a married couple, out with our children? I chafe at the assumption that I’m straight, but it’s awfully hard to blame people for assuming I am as I navigate the bookstore or the farmers’ market or the pharmacy with the father of my children in tow.

Of course, there are the folks who just get it — at least, most of it — without us having to say a word, who beam at baby Isaac snuggled in the sling against Rachel’s chest and congratulate the two of us on our beautiful children, the waitress at the greasy spoon who knows our orders by heart and tells us she remembers when her kids were the same age as ours, the little old lady at the next table who practically abducts the baby and then says, “Well, I like that,” when we explain that we are both “the mom.”

It’s an adage central to the language of queer rights: love (as in, not simply legality or biology) makes a family. In fact, Rob himself has two fathers: a biological one, whom he refers to as his “father,” whom he saw for the last time in his teens and whose funeral he didn’t attend, and his “Dad,” the gentle man who married (and later divorced) his mother and whose last name he took — and who disappears from his life for months at a time. Rob of all people knows that biology doesn’t make for fatherhood — and that neither does nomenclature. Maybe it’s because he knows how easy it is to screw up, how tenuous (and how relentlessly all-encompassing) this fatherhood game is, that he has opted to take on a role in our lives, and in those of our sons. Maybe that’s why he moved across the country to be with us for that year, and is still trying to find a viable way to make our hometown his hometown. And maybe that’s why he hasn’t opted for full-time parenthood.

Is Rob a father? A dad? An uncle? A parent? A very good friend? Something in between all of these? Is it that we don’t know, or that language fails us when it comes to the words to describe our relationship?

Maybe, in fact, it’s just the opposite: maybe we’re the ones failing language. Maybe it’s that we lack faith in the ability of words to stretch and bend and accommodate our realities. If Rob is a father, does that somehow negate Rachel’s status a mother? If Rob is a father, then are his parents (his father? his Dad, whom I didn’t meet until Isaac’s first birthday) grandparents? If Rob is a father, can he still leave for months on end, disappear for weeks at a time without phoning, choose when he will and won’t visit, opt out of diaper changes and discipline and night feedings (assuming we relegated such tasks to him, which we didn’t and don’t)? It seems odd that the three of us have yet to come up with a snappy answer to the questions posed by the well-meaning strangers in the grocery stores and playgrounds and pharmacies and restaurants that encompass our daily lives. It seems even odder that we haven’t come up with a snappy answer for ourselves.

Or is it? None of us — me, Rachel, Rob — entered into this arrangement, this relationship, expecting it to be simple, uncomplicated. None of us wanted, has ever been about, easy explanations, tidy answers. And, now, in the day-to-day rhythms of our lives — especially, and perhaps sadly, now that Rob no longer lives in the same city — it doesn’t seem to matter as much. Rachel and I are mom and mom. Rob is, simply, Rob: at once viscerally important and ephemeral, vital and, somehow, optional.

You can read more of Susan Goldberg’s work at www.mamanongrata.com 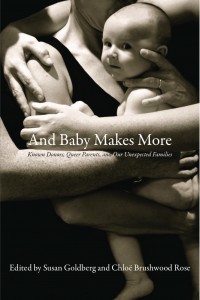