Even though I had not yet come out, I started attending Pride in the mid-80s—performing, dressed as Mayor Art Eggleton wearing a pig’s snout. He wouldn’t recognize Pride as an official day; now politicians fall over themselves to appear gay-positive.

After I did come out in 1986, I was M.C.ing the only stage when Jackie O’Keefe heckled me, yelling “We always knew you were a dyke!” I said, “Who told you?” She brilliantly shot back, “Your mother.” 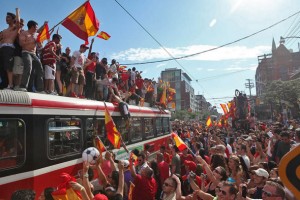 The long weekend just passed, and although an awful lot of Toronto wanted nothing more than to leave the city and “get away from it all,” I felt the opposite. I wanted to dive into it all like it was a lake. I wanted to swim in the city, through the throngs.

July 1st, and on Bloor Street some people were dressed to celebrate Canada Day, others to support Italy or Spain– who were to clash later in the afternoon for the Euro Cup final– and even more were dressed for the Pride Parade, an event that would see 1, 000, 000 lining the streets of the city on a scorching hot day.

Near Bloor and Yonge a young beggar sat on the sidewalk beneath the shade of an awning. He had his shirt off and he was pale, bruised and unpredictably tattooed. He seemed messed-up, and as people passed by he reached out for each one, as if taking a swipe at their legs. People were avoiding him like the plague, but a beautiful woman in provocative red hot pants with a Canadian Maple Leaf on each ass cheek stopped in front of him and bent over as if posing for a Page 3 shot. She then put both her hands on his face and kissed him.

The Time Warp blared from a float and a riot of middle-aged men in tank tops and red pom-poms exploded in front of us. Joyously performing a carefully choreographed dance number, their teeth could not have shone any brighter. Teenaged girls, their bodies covered in glitter, wove through the crowds as the scent of pot wafted by indifferent, happy police officers. Drag queens, like Barbie Dolls melting in the sun, smiled bravely from their flotilla perches, waving past us like the celebrities they’ve always known themselves to be.

The palest Goth girl in the world sat in a wheelchair that was being pushed along the sidewalk by a large Indian man in a kilt. All in black and wearing a Hijab, a small woman with bony, root-like hands squeezed through the crowds smiling and taking photographs.

A hopeful young man wandered about armed with two massive water guns. As if performing a public service, he asked everybody, “Free water spray? Free water spray?” He delighted when an elderly couple declared that they wanted one. Smiling and still holding hands, they raised their arms and closed their eyes as if on a roller coaster, and the young man sprayed them cool, the nearby crowd cheering encouragement.

A mother was taking a photograph of her daughter standing beside a wall of Pride Posters. The girl was perhaps 18, and both she and her mother were wearing the convenient, floppy hats of tourists. The girl held a Rainbow flag and even though she was smiling, her eyes were inflected with a touch of melancholy. Who knows what journey led the two of them to this place in time? The song Like A Prayer rolling down Bloor Street, the two of them walking away now, arm in arm. 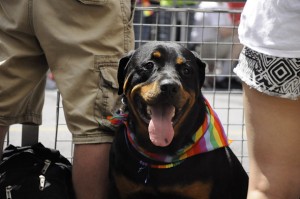 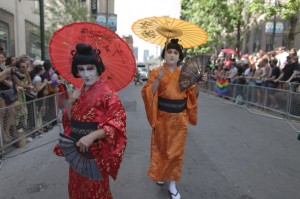 Saturday August 17, 1974, was a bright sunny afternoon. I was walking towards Alan Gardens. My stomach was in a knot. I saw a handful of people on the north side of the park and a pile of placards.

I was just back in Toronto after two years in South America. I had been following a young man who I was in love with, but afraid to tell.

When I finally hitchhiked back to Canada in the spring of 1974 I knew I couldn’t live with this kind of trauma drama. I had to either come out or jump off a bridge.

I had heard about The Body Politic, and although completely paranoid that someone might find me with them, I managed to read a couple of issues sitting in the middle of an abandoned playing field where I could see anybody coming from a quarter mile away. The paper had gotten me used to the term gay. It no longer made my stomach twist like the word “homosexual” did. But I didn’t actually know any gay people. There were ads for bars and baths, but the thought of going to a gay bar conjured up terrifying images of drag queens or leather men. I had no idea what a bath was. I was from Beaverton after all.

Then I saw an ad for a Gay Pride March. I’d been on my share of marches and demonstrations. I knew what you were supposed to do at that kind of thing.

Still, that hot Saturday afternoon, I hung around at a distance for a while before I jumped in. There was no one in drag or wearing leather or chains. In fact, most of them seemed pretty normal. So when they were almost ready to go, I quickly walked over and picked up a sign that said “Gay Liberation Now” and started marching down the sidewalk thinking, “if there’s a TV camera I wonder if I can induce a heart attack and die by holding my breath.

But there were no TV cameras. A gaggle of people walking down the sidewalk with hand-drawn placards, was hardly newsworthy, even in 1974. Another advantage of the group being so small was that everyone recognized a new face in the crowd. At the end of the march I was snapped up, taken home, had sex with for the first time, given a bunch of gay liberation literature and told to come back for more when I had finished reading.

I was a quick reader.