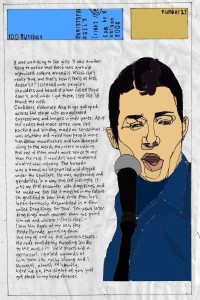 I was around seven years old when my mom caught me kissing a television guide picture. I think I was curious to know what kiss that I had seen on television felt like. It was a picture of Linda Carter as Wonder Woman. My mom thought I was kissing the picture next to hers which was Harrison Ford as Hans Solo. She proceeded to give me a talk about the birds and the bees. I stayed quiet and a bit confused since she kept pointing at Hans Solo. Although I did find Hans interesting in his vest and rugged good looks, he was no long-legged, sparkling blue-eyed Wonder Woman! Yet I wasn’t about to correct my mom lest she continue talking. I just wanted her to stop talking about the boys and girls, so I stayed quiet and listened so she would hurry up.

My childhood was a bit sheltered. My parents were young and had immigrated from Colombia. Our household was Roman Catholic and I attended the separate school system. My social life was school and going to the library. I didn’t really question my sexual identity, I was attracted to both men and women. However, I knew that some of my thoughts as I hit puberty weren’t acceptable. Hell, church said that marriage and love was between a man and a woman. Why would I question that? I went to school, went home, and escaped in books, VHS movies, and music. I had boy crushes and girl crushes, but as an overweight teen the fear of rejection was far too great to put any action into it. Even if I did, I thought girls would think me a freak if I admitted my attraction to them.

It wasn’t until I went to university that I found a bit of freedom and met the girl of my dreams.  Well, we were good friends first, but I soon found myself skipping classes just to see her.

My first sexual experience was with her and it confused me to no end. Although she was the most understanding and open person I had ever met then, I just couldn’t bring myself to accept what we were doing. A combination of my upbringing, religious guilt, and a childhood trauma all came up as barriers to fully being there for her. Instead of pushing me away, she wanted to be closer, but that only made me feel like pulling away. My reaction was hypocritical and the worst: I cheated on her many times.

Although we loved each other, we fought often, and eventually we grew apart. On top of the guilt I felt for my actions, the confusion in my disenfranchisement with everything grew worse. Honestly, looking back now I wonder if it would have been better if I had told my parents about it all then. I wish I had told them many things, but my nature has always been to repress confusion and push through it. Little did I know that being honest would be a far greater thing for me.

I took a break from love or dating for a while. In fact, I was planning on dedicating my life to the church after graduation. I didn’t want to deal with the pain my chaotic brain was causing me at the time. I soon realized that I was using religion an escape from acceptance, but as much as it helped me once when I was younger, it wasn’t helping me then. I quit religion altogether for various reasons soon after. It was an internally tumultuous time and instead of questioning my motives I questioned everything, which was for the best. During that break I took out Jeanette Winterson’s book, Oranges Are Not The Only Fruit from the library. The change in perspective that book brought in me made me feel less alone and little bit more grounded. I was also in therapy for depression and it’s hard to say when things got better, but they did. I accepted who I was without guilt or shame. I wasn’t any different than anyone else. It was society that was unaccepting of difference. Love is nothing to be ashamed of and in a world full of messes and despair, we have to take in happiness whenever we are able to find it. Life’s too short to question the goodness in it.

I soon started dating again and I reconciled somewhat with my first girlfriend. We kept in touch even after I got married, and closer when I had my kids. We lost touch again several years ago, our lives got busy: her, the eternal academic, and me with my family. It was with great sadness that I received news from her partner of her passing. It was only later that I found out that we both shared continual bouts of depression in our lives.

I think of her often and never regret what we had together. I celebrate it. It wasn’t a phase. I am proud of the truth she tried to make me see. I am a bisexual woman and I loved her.