Typography has changed considerably since 1450 when Johann Gensfleisch zum Gutenberg compiled the technology necessary to build a mechanical printing press. (Meggs 80) This Blog will cover a selection of the advances made in the period of time just before Gutenberg’s death in 1468 to the early 20th century.

In this roughly 600 year span we see many significant changes in the technology relating to the printing industry. Along with technological shifts we see a morphing of styles and conventions in the industry. Despite these changes we also see a remarkable continuity. The first iterations of fonts made for the purposes of printing where intended to look as if the letter forms were made by hand. This humanist style proved popular for a time probably due to readers familiarity with the style. Probably a significantly less important reason but oft repeated story is that of Johann Faust who financed the work of Gutenberg. Faust seeking to turn a profit on his investments seized Gutenberg’s press and several nearly completed 42 line bibles. When attempting to sell the bibles Faust was accused of witchcraft due to their profound similarity (Meggs 81)

Today we can still see examples of conventions established before the birth of the printing press. The continued importance of the glyph 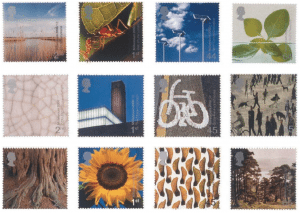 is one of these conventions. A glyph is an image conceived to denote specific meaning as supposed to a phonograph an image made to denote specific sounds. See David Hilman’s “Millennium Stamps” from 1999 for a (somewhat) contemporary of the use of the glyph. (Meggs 517)

The advance of analog mediations in printing was most pronounced in in the nineteenth century. Several technical achievements made it possible to craft more accurate reproductions of font as well as images. Typewriters and typesetting machines became commonplace driven by a desire to speed up the process of putting printed words on a page. (Meggs 161) Steam powered printing presses made printing faster and cheaper. Chromo-lithographic presses allowed people for an expanded use of color printing on an array of substrates or materials. 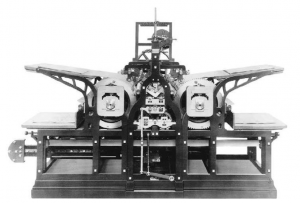