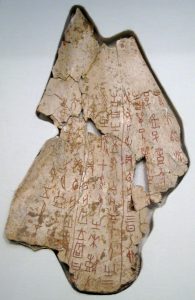 The Chinese book culture is closely related to the development of writing, language, literature, art, and technology. As one of the most ancient cultures, Chinese typography have a long revolving history over thousands of years which generate a variety of calligraphic forms. Chinese characters have a noticeable feature: each are identical and individually developed. It was based on glyphs, by using an original and complex methodology of combining sound, form and meaning as a whole to establish an enriched writing system. The characters are both phonographic and logographic, found earliest in engraving on bone known as the oracle bone script  (“jiaguwen”) around the Shang dynasty with the purpose for manuscript and divination. Later transformed into Bronze inscription as the record for the nobilities’ ritual activities. Since then the great revolution began, especially with the emergence of “small seal” style during the Qin dynasty, when the first emperor Qin Shin Huang seeking for a monarchical power to unifying the countries. The “small seal” style marks the transition from the ancient script to a more rationalized and legitimate writing system, which its legibility started to become similar to the modern Chinese characters. 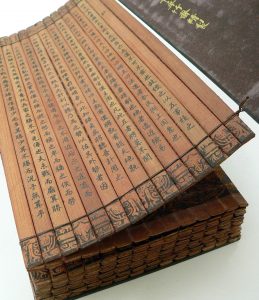 Many of the great creation have grown and expanded at the same time through the long process of book development. As the beginning of Chinese book culture, many natural materials were used such as the turtle shell and bone, and the characters were mostly done by hand carving. Later with the development in the Qin dynasty, the book binding technique of bamboo slips was invented, which made by weaving strips of bamboo, or wood with twine, or leather. With the major technological invention of paper-making during the Han dynasty, the Chinese book cultural become even more influential and significant, which plays a major role in the formation of modern Chinese writing, language and literature.

The webpage is to introduce a further understanding of Chinese book culture from three general historical aspects: aesthetic, technology, and political.