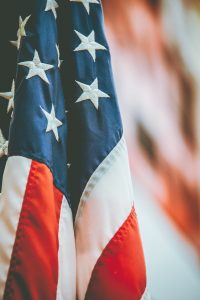 2008 was the year political poster art made a huge comeback, thanks to the former president of the United States of America, Barack Obama. Through his election, Obama’s campaign produced one of the most iconic posters of the 20th Century: The Hope Poster. Created by Shepard Fairey, the famous artist behind the “OBEY” street art movement, the ask would challenge his contemporary street style and bring it into the world of politics. What he did not know was that he produced one of the most famous pieces of American poster art that would inspire a new generation of voters. 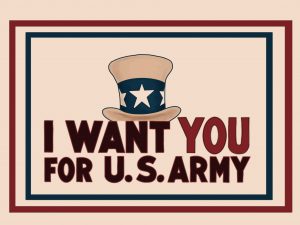 When approaching the HOPE poster, the first thing you notice is its use of bold colour choices. The use of a deep red, clashed with a subtle blue only to be rounded out with yellow makes Obama look heroic and full of optimism. That, paired with the single word HOPE, Fairey created arguable one of the most recognizable political posters to date, even considered as modern day pop art. However, this is not the first time we’ve seen political posters like this. Fairey’s design is reminiscent of American propaganda from the early 1910s and 1920s, when the government was recruiting for the army. Similar to the famous “I Want You” poster featuring none other than Uncle Sam, the HOPE poster pays tribute to classic America. This is a prime example of postmodern referencing, where an artist references looks and designs from past eras, and uses the aesthetic to convey a new message. 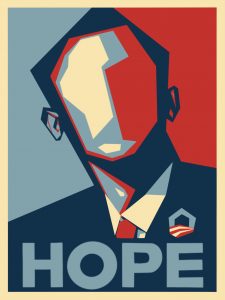 Regardless whether Fairey drew inspiration from American propaganda or not, one thing is certain; that same poster art style is timeless when it comes to politics and winning votes. Ultimately, Obama won the 2008 election and served as president of the United States for 8 years. In turn, the HOPE poster went on to being apart of American history. Even though the same style and typography has been used to create parody posters, this shows the impact what great design can do.