Beginning in the 1950s typography benefitted from many technological advancements which spurred experimentation and innovation as well as an exploration of previous styles and trends.

Phototypography was a technology first explored in the 1920s which stored letterforms on a transparent film and used projected light to expose letters onto a photosensitive intermediate material.  The first machine operating this way was the Thothmic photographic composing machine which was revealed in London in 1925, after which the technology was slowly refined but not fully taken advantage of until the 1960s. 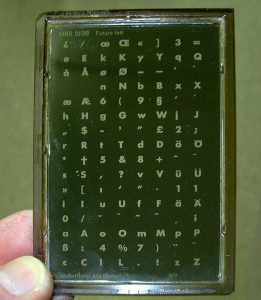 Phototypography provided advantages for both those creating type and those using it.  For people interested in creating letterforms, the costs and requirements were drastically reduced.  Previously, the process to create new type involved designing the forms, cutting the punches, stamping the matrices, and then finally moulding the piece of cast type, each of these steps may have required a specialist and dedicated machinery, and every size of each letter would have required a repetition of that same process.  Phototypography collapsed all those steps into a much simpler process, perhaps allowing a single person to easily create a new typeface with relatively little cost.

For people laying out type, this new technology offered many advantages as well. Physically, each typeface was a simple piece of film that took up little space, rather than the metal sets required in multiple, at every size.  The fact that the letterforms were projected allowed greater flexibility in the rendering because the letters could be manipulated via lenses or filters to adjust the version on the page. Herb Lubalin was a designer who took full advantage of Phototypography and created designs that would not have been possible with previous technologies.

Another side of Phototypography was the ease in which typefaces could be copied and reused.  Because the typefaces were created via a chemical process rather than a physical one, they could be replicated with relative ease compared to metal type.  This allowed to an exploration and reexamination of older typefaces, especially decorative type that had been dismissed due to the prevalence of International Typographic Style, however it also lead to serious problems due to the unauthorized usage of commercially produced typefaces because essentially any specimen book could now be used to create a usable typeface.  To help combat the issue of piracy, Herb Lubalin, along with several others, set up the International Typeface Corporation to sell licensed typefaces in 1970. 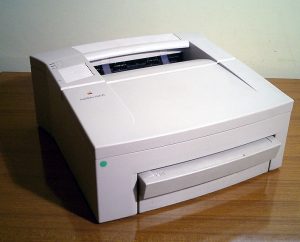 Several decades after the popularization of Phototypography there was a new set of inventions that again revolutionized typography known as Desktop Publishing.    Apple Computers revealed a new computer in 1984 which featured the relatively high resolution of 72 dots per inch on a monochrome screen, and a hand-held control device called a mouse.  These two elements opened the door to a new way of thinking about how computers could be used for graphics work. Previously, all control of a computer was done via the keyboard via a set of rigid commands, requiring an analytical and pragmatic approach.  The mouse and the high resolution screen allowed an operator to do things in a way that was more natural and more equivalent to doing things in the physical world. The new input (mouse) and output (screen) devices allowed graphics programs to be developed that opened new possibilities.  Adobe released PostScript, a way of laying-out graphic content, and Aldus released PageMaker, a program to create graphical components that would be rendered via the underlying PostScript system. Apple also released a laser printer which allowed for the immediate and economical production of a physical proof from the on-screen design. 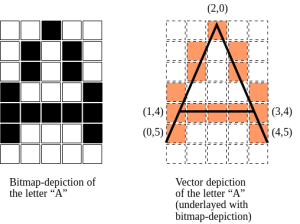 The early days of digital typography saw designers making large compromises to work with the limitations of the new systems.  Early typefaces were stored as bitmapped data requiring designers to create fonts at a specific size by choosing which of the pixels on the grid would be light or dark, these fonts were optimized for the specific substrate of the screen, but could not be enlarged or used in other mediums.  Later developments involved storing typeface information as vector data by representing the letter forms with a series of coordinates and Bezier curves, which allowed greater flexibility because sizes could be adjusted without losing quality, and the letterforms could be rendered sharply on higher resolution mediums like print.

Much like how Phototypography greatly simplified the process of producing type, Desktop Publishing drastically reduced the requirements for designing for the page. Previously, the creation of a dynamic design including words, illustrations, and photography would have required the expertise of many different specialists each with their own set of equipment, and now one person with a single device was able to do almost anything they could think of in the world of layout and design. The use of the computer for Typography and Design would later lead to the world of mobile devices and the internet that we now know today.