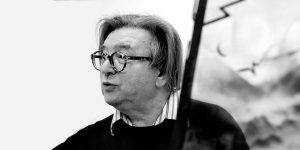 Q. Hello, I’m Jooeun Kim. Today we are here with Wolfgang Weingart a famous graphic designer, who is best known for his collaged lithographic works during the 1970s and the 1980s. Through his expressive typography he has influenced the design world even to this date. Could you tell us a little bit about yourself?

A.  I was born in Germany, I became a typesetter for number of years, then started to teach typography at Basel School of Design in Switzerland to international groups of designers. One thing people notice about me is that I love experimenting and I love to break boundaries to create something new.

Q. So, you worked as a typesetter for number of years, but some people refer to you as a “typographic rebel”—could you tell us why people call you that?

A. People call me a “typographic rebel” because, like I said, I really enjoy working outside the box. I mean that quite literally! As I was typesetting and teaching, I noticed how rigid the typography is on designs, so I decided to have an open mind, and I was the first designer to break away from the grid and the strict Swiss aesthetic principles of design. My rebellion can be seen in my work actually.

Q. That’s interesting, could I ask which one specifically?

A. Yes, my poster Schreibkunst, that I created in 1981 for the calligraphy exhibition at the Kunstgewerbemuseum, displays some of my rebellious ideas. I used a sans serif font throughout the poster, and instead of sticking to one point size, I used variety of different sizes. If I remember, the letterforms on the poster had big leading and kerning. To add more, I used contrasting colours to interfere, yet work with the text, such as the white shapes added to the black text, and not only black but, incorporating white text. I guess these factors led me to be a “typography rebel.”

Q. Since we are on the topic of Schreibkunst poster, could I ask you to talk a bit about the work?

A. So, because the work was for a calligraphy exhibition, I tried to incorporate the idea of calligraphy into the poster by bringing in different elements, such as the fountain pen nib and the writing. I thought works at the time were too fixed and stiff, so I went for a joyful design by layering various visual effects, such as bringing in halftone dots to give richness to the surface.

Q. Hearing about the work, it sounds very technical. Did you use one technique to create this piece or did multiple techniques come together?

A. I used various different processes to create this poster. The introduction of transparent film in the 1970s allowed me to experiment with elements by overlapping them to create a collage. With transparent film, I layered lithographic text and images. The repro camera allowed me to manipulate type and combine it with various rasterized film templates. There were ways to make things easier, because phototypesetting methods started to play a role, but I preferred hand-craftsmanship, because it allowed for the unexpected and the happy accidents that I favour.

Q. That sounds like a lot of techniques. Did you have any trouble creating Schreibkunst poster?

A. I didn’t face any technical troubles, but I had some artistic difficulty, and went through different iterations to get the perfect result. I dedicated about forty days into this work, from first draft to printable film. After it was finished, I decided to rework the image again, because the fountain nib pen for me was too realistic. In the end, I used my own money to get the posters reprinted.

Q. The work is beautiful! I wondered if this piece inspired any other work?

A. Over ten years I tried to produce designs with the same complex technique, so they all share some of the same qualities, but one later work that does look similar to Schreibkunst is Das Schweizer Plakat, that I created in 1984 for the exhibition Swiss Posters. Both designs share the overlapping planes that shift between being transparent and opaque. Also, the halftone dots for both posters are enlarged to be visible to the viewers. They are both quite freeform with similar graphic elements, like the lightning bolt. I guess, the only major difference is that one is coloured and the other is not.

Q. Thank you so much for your time. Your designs will forever be influential in the world and your way of breaking the boundaries inspires so many other designers to pursue their own style.

A. You’re very welcome, thank you for having me.