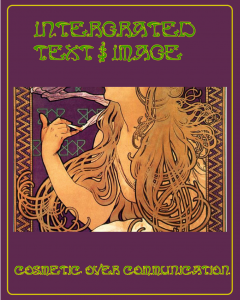 The font I decided to use is inspired by the classic French Art Nouveau. It is based on the works of Alphonse Mucha and the Paris signage of this era. Alphonse Mucha’s JOB Cigarettes advertisement and inspired my composition and incorporates image and text in a flowing, curvilinear fashion. My text, “integrated text & image, cosmetic over communication” relates directly to the Art Nouveau ideal of beauty over all else. Through my composition, I depict this by highlighting the most detailed part of Mucha’s 1887 JOB Cigarettes advertisement and placing my text around it. I chose to do this to show the viewer the focus on the beautiful, curvy lines in the Art Nouveau style. 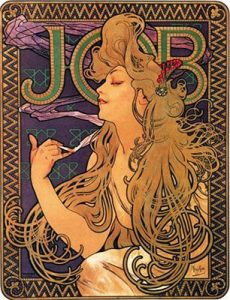 Industry rises with the smoke clouds.

If this design where to be described through the sense of taste, then I would describe this piece as something akin to a bag of orange and citrus flavoured hard candies.   The bright psychedelic colours of the design give a sour candy-like taste to the piece, and yet is very sugary and sweet.  The organic movement and shape of the words and image gives the taste of an organic-based synthetic food, more specifically orange and minor citrus flavoured with 10% real fruit juice.  The solid lines give a kind of hard-candy texture and taste, something that one would suck on rather than chew and take one’s time in absorbing and tasting the flavours.  The flow of the design means that this is no meal, there is no transitioning of flavour and texture, it does not move from salty to sweet or from fruity to meaty, it remains much the same throughout the design. 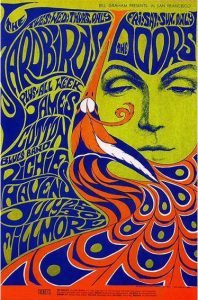 In terms of the Psychedelic movement itself another sense I would associate it to would be the feeling of running your hand through two or three inches of multiple paints as they mix, more specifically the viscosity of house paint.  The flowing movement of shapes in the movement while at the same time remaining large and solid are what give it its particular viscosity, a fluid but not very fluid density to evoke its natural-like flow while still very thick and slow to mix like syrup akin to the large solid shapes that appear in the movement.  The very different exotic and bright colours give the feeling of other paints slowly meeting and mixing, the slightly different temperatures and textures slowly merging and crossing as the textures inch closer to becoming one.