The concept of creative synesthesia occurs when individuals experience one physical sensation that evokes another with a sense; such as, tasting food with the use of imagery as someone explains it to you. For this post, it will revolve around, the 1969 Coca Cola ad, where James Brown’s was featured, designer yet to be found. During this time, Coca Cola had changed their original slogan from, “Things Go Better with Coke to It’s the Real Thing”, during this switch James Brown had recorded a new song for the new slogan, which also landed him to be featured on the ad. For this composition, the undiscovered designer incorporated warm, citric colours that provide a bright, refreshing and summer-like feeling. Aside from the relation of the fizzyness in the beverage and the organic lines as the background, this particular colour palette, evokes the sensation of taste, as a burst of citric flavors come to mind. This pop art composition reminds me of the pop rock candies, where every mouth full provides you with a POP and a burst of new flavours. It displays a significant amount of happiness, which is clearly demonstrated on James Brown’s face, also, with the dominance of yellow, orange and golden yellow, the sensation of happiness and joy is greatly presented. Pop rocks candy provides every consumer with a new burst of excitement as every taste is different. The small organic shapes included in this design around the ears and on small sections of the body represents the different shapes of the little pop rock candies that come inside of the packages, as they are all different sizes. 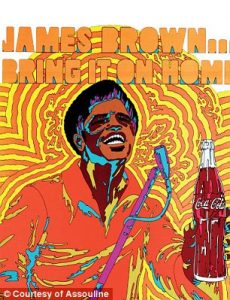 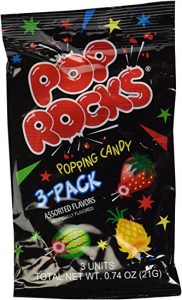 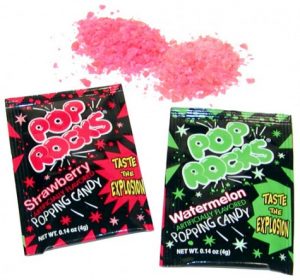