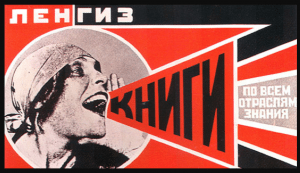 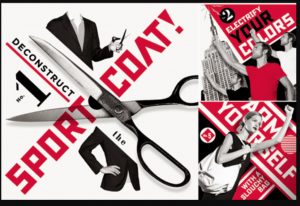 The images I chose to speak about are Rodchenko’s “books” advertisement and the modern day piece that took inspiration from it, the Saks on 5th advertisements for their line. The similarities between these pieces are uncanny and the fact that Saks on 5th took heavy inspiration from Rodchenko’s work is evident, from the dramatic and poignant lines to the red white and black colour pallet, even down to the use of collaged images to create a certain aesthetic that directly reflect what Alexander was doing with his posters in the 20’s and 30’s.

Alexander Rodchenko was a designer who explored many mediums but in this example he has chosen graphic design and collage, using photography and type to create an impactful image with the style known as photomontage. He was part of the Russian Constructivism movement and was greatly influenced by cubism and futurism.

Saks on 5th uses the same colours and themes as well and photomontage in their adverts however the meaning and symbolism does not come from the same place. They are emulating the propaganda of the 30’s and 40’s to make their own tongue in cheek statement about their feelings on the recession in America.