The International Style, also known as Swiss Style, is a formulaic, simple and visually pleasing form of graphic design that has been used Internationally since it’s inception in 1950’s Switzerland. The goal of the Swiss Style was to create an internationally understood form of design that doesn’t leave any room for bias or misconceptions. This was a time where international trade was rising, henceforth the importance of these non-propagandist designs were more crucial than ever to be able to communicate effectively. Whether the design is asymmetrical or linear, it follows a grid. There are formulas to the process that have been perfected and are religiously followed, which are easy to distinguish in this movement.

Josef Muller Brockmann effectively communicates in the Zurich Opera House poster all of the important details about the event without any construed/distracting info. Rodo Abad, 40 years later, critiques the Swiss Style and makes basically the same poster as Brockmann, (since there is a formula to follow it is very easy to compare the two), and declares that anything written in Helvetica is art. The formula is a work of art and I have to agree with Rodo Abad, even though he is kidding. He is critiquing that the entire movement all looks the same, and that it leaves no room for creativity.

In conclusion, Rodo Abad takes inspiration from Brockmann and the entire Swiss Style movement to critique and mock the entire style for being too constructed.

“Creative Synesthesia is a condition in which one type of stimulation of the senses evokes the sensation of another.”

This perceptual phenomenon applies to Filippo Marinetti’s “At Night In Her Bed”. The father of Futurism, the goal of Marinetti’s work was to reject all that was traditional and celebrate urban culture and advanced technology. The Futurism movement wished to portray movement, speed, power and violence through a modern lens.  Marinetti’s main subjects/inspiration were the automobile and war, which represented all of these components.

In “At Night In Her Bed”, Marinetti depicts how sound would look. He has created a visual frequency of the sounds, using elongated or large type to show us a particularly higher/louder sound compared to the sounds that are smaller, which we can assume are shorter or quieter. He is showing us a bombing that is keeping a woman awake at night. It is an allegory, because she is thinking of her partner who is on the front lines fighting in the war. She is awake because she is imagining the bombings. It is total chaos, we feel the anxiety the woman is experiencing through Marinetti’s jagged lines. There is an influence from the Vorticism movement in this piece; the text is exploding upwards in a circular motion away from the woman imagining it. This piece is unique where it has already aided me visually to experience synesthesia. It’s very illustrative with the text, which brings me to interpret the sound of a bomb.

The Victorian Era (1837-1901) was when fat faces were always used in their posters and illustrations. Large and loud, it was designed to grab the attention of people walking by. With yellow-books that were being made at this time, they were cheap and sold at every train station. The content would be of vampires, werewolves(mythological) or criminals. 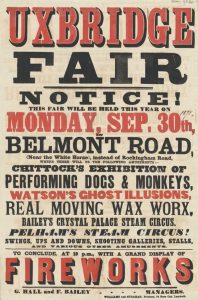