Street art should be included in the next of Graphic Design: A New History because it is the most accessible form of non-commercial graphic design. In fact, you can find these works for free on the streets which makes it part of your environment: it’s easy to interact with it. Street art is used as a form of power and protest because it is often considered a form of vandalism. (Figure 1) 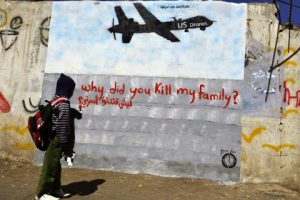 Figure 1. Murad Subay’s street art criticizing the use of drones by the USA in Yemen, 2014 (Source: https://theboylanblog.wordpress.com/2013/12/16/street-art-as-protest-against-drone-warfare-in-yemen/)

In terms of graphic design, the anonymity of street art gives artists the chance to experiment with typography and many have been successful in using only type as their medium (Figure 2). On the other hand, other works have both text and images: some use type to strengthen their message (Figure 1), others use type to form their images (Figure 3). 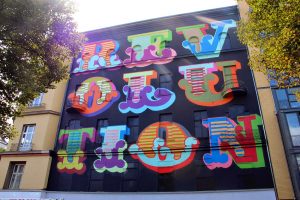 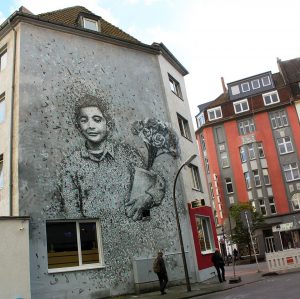 In the 80s, graffiti in New York City subways played a crucial role in the hip hop scene. In fact, artists used this form of expression to grab the attention of music producers and promote their music. Since then, it has become a style for hip hop posters and album covers and has been known as the “punk” scene (Figure 4). 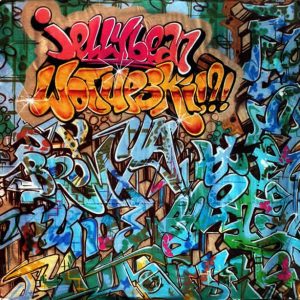 To this day, numerous street artists have had huge success. One of them is Jean-Michel Basquiat who became the star of the 1980s New York art scene. He used both texts and illustrations is his works to defend causes such as poverty or racism (Figure 5). Another example is the anonymous Banksy. He uses powerful illustrations and satirical phrases to defend different causes. His works are found around the world and he is one the most famous street artists today (Figure 6). Although the work of street artists is mostly non-commercial, their pieces have influenced many designers and should received greater mention in Graphic Design: A New History. 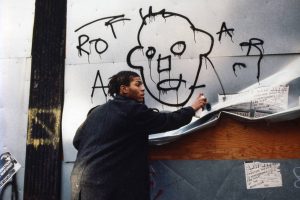 Figure 5. Jean-Michel Basquiat executing one of his street art works in the 80s. (Source: https://www.widewalls.ch/street-art-legends-best-of-basquiat-art/) 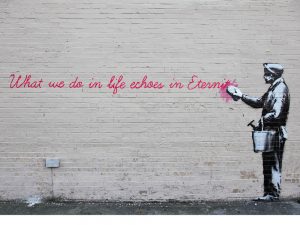 Street art/graffiti has also become a “style” for new digital designs. In fact, many street artists use stencils to execute their work as fast as they can. The use of stencils has inspired a number of digital fonts (Figure 7) and poster illustrations (Figure 8). 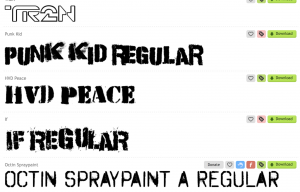 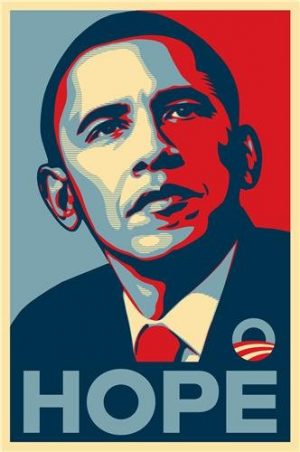 Another street art style that has been used in a digital form is the abstract geometric forms used to create letterforms. Paula Scher used these forms for the London 2012 Olympic logo (Figure 9). The bright colors, the geometric shapes, the abstract forms and the overlapping are all characteristics that can be found in street art.

So, we can say that street art played an important role in graphic design to the point that the style has been often digitized for logos, typefaces or posters. In addition, some of the best known contemporary artists such as Basquiat and Banksy are street artists. This is why, in my opinion, street art and graffiti is an area of graphic design that should be included in Graphic Design: A New History.