Super Smash is known for its multiplayer mode but its 1 player mode is also enjoyable and must be completed in order to unlock all the characters. When starting the game you see the introduction where a hand with a white glove comes sets up a scenario and places the toys into it. The toys are the characters in the game and the hand is controlling them and forcing them to fight. This is the story line of super smash bros.

Once you choose 1 player mode you are left with a few options. You can choose the 1 player game; fighting at different stages and finally facing the final boss, the master hand. There is also training which is helpful if you are new to the game and you can also choose to practice the 2 bonus rounds: break the targets and touch the platforms.

The one player storyline begins by you choosing which character you will play as and what difficulty you are going to play. Once you choose your character you start of by facing Link at the Hyrule Castle. For every stage in the 1Player Game you only have 5:00min to defeat your opponent. Since this is the first stage, Link is a very easy opponent to defeat and once you have beaten him you move on to the next stage. 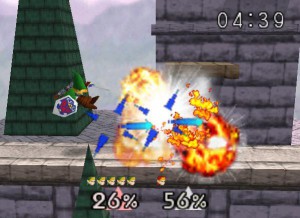 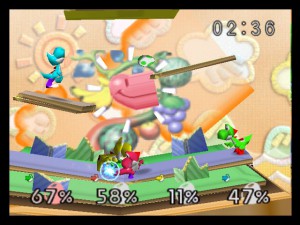 Now once at the 3rd stage you are put against Fox McCloud on a 1 vs 1. This can be a tricky match up because Fox has a very strong up kick that can knock you far and can force you to lose a life. He only has one life and since it is only the 3rd stage of the 1 player mode it should not be too hard for you to defeat him. 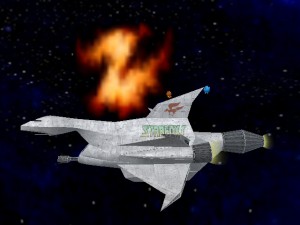 The first bonus stage starts after you beat Fox. For every character the bonus stage is a bit different because the character’s strengths and weaknesses are taken into consideration and the map layout is created with that in mind. This bonus stage can be practiced with any character before entering the 1 player game. 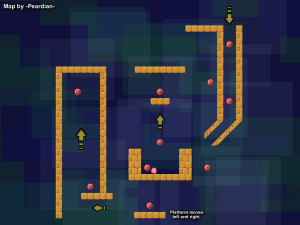 This is when things start to get a bit tricky. The map of this stage is Peach’s Castle. You are provided with a random ally who will help you face Luigi and Mario. If you kill Luigi before Mario then you will also get bonus points after the match. 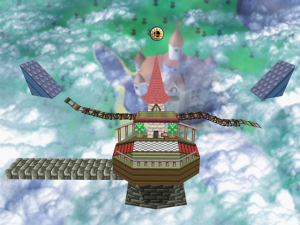 Next you must face Pikachu at the Saffaron City map. This map is one of the hardest maps to play on in my opinion. It is set up in such a way where it is easy to fall and hard to get back up. There are pokemon that come out and attack you and there is also your opponent of course. So it becomes a bit difficult but since it is so easy to make a mistake and kill yourself chances are the computer will do the same and you can win to move on to the next stage. 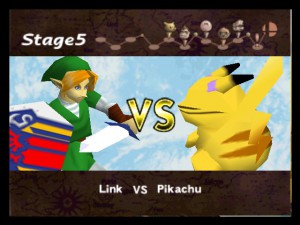 One of my favourite stages, here you must fight a 3 vs 1 against Giant Donkey Kong. He is much bigger than normal Donkey Kong and can take much more damage before you can knock him into the air. You do have help from 2 computer allies but this can be a tricky stage if played on the harder difficulties. 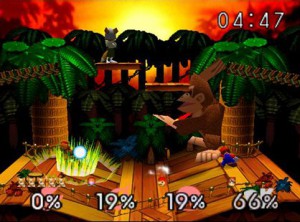 The 2nd Bonus level is Board the Platforms. On this stage you must hop onto the platforms and change their lightbulb colours from red to green. Again similar to Bonus Level 1, the map layout is based on your character. 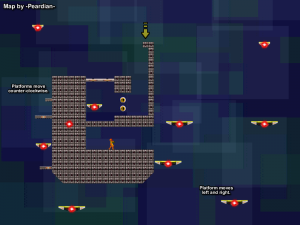 Another Favourite of mine the Kirby Team stage where you must fight all the different types of Kirbys on their home court map, Kirby’s Dreamland. Similar to the Yoshi Team the Kirbys are weaker than just facing one but you are in a handicap vs 3 at a time. 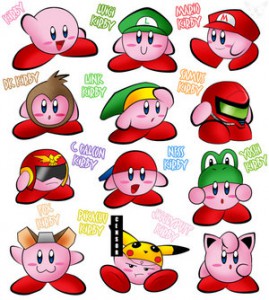 On Stage 8 you must face Samus on his map. This map has lava coming up and effecting the gameplay but overall it is surprisingly not a hard stage and easy to beat if you can dodge the lava. 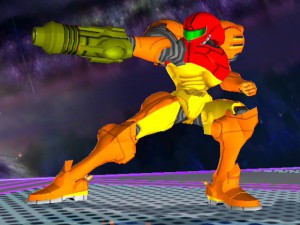 Stage 9 you enter one of the maps which is not playable in multiplayer, the metal kingdom where you must fight Metal Mario. To defeat him you must use a lot of combos and strong attacks to build a high percentage before you can knock him into the air. He is similar to Giant Donkey Kong because he can take a lot of damage and it is very hard to get him into the air so that you can juggle him. 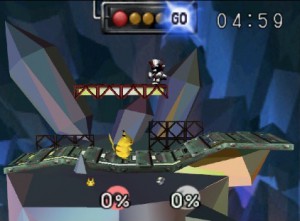 Now you enter the 3rd Bonus Level stage, this bonus level you can’t practice before playing the 1 player game. It is the easier out of the 2 bonus levels and it’s always the same. You only have 1 minute to run through a few obstacles and a few opponents that are thrown at you. The faster you finish the more points you will get. 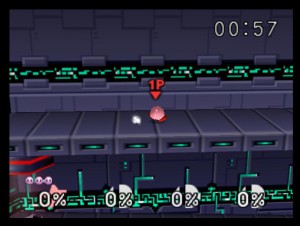 Stage 10 which is 1 stage before the final boss you most face what seems like endless polygon opponents. This stage is called the Fighting Polygon Team, which is all the characters but they have a polygon costume. To make this stage easier for yourself, you must try to kill 2 or more polygons at once and you have to attack as many of them as fast as possible. Throwing them is also very good to split them apart and fight one on one. There are some health power ups that drop and are very useful to use so that you can face the final boss with as many lives as possible. 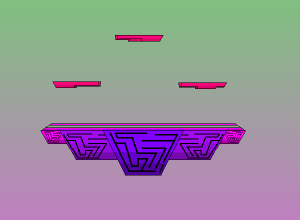 You have finally reached the ultimate boss, the Master Hand. Going back to the intro of the game where the master hand is setting up the scenario and making the toys fight each other. Now the toys don’t want to fight each other any more and have turned against the Master Hand so that they can become free. Fighting the Master Hand is very different than any of the other opponents, you can’t knock it into the air or kick it of the platform. His moves all charge up so you have time to see what it’s about to do. Also after attacking it will just hover for a few seconds which leave you an open window of time for you to inflict the damage. Unlike all the other opponents the master hand starts of with 300% health and instead of damage building you must decrease the damage. Once you defeat the Master Hand it blows up in space and your character is free from its power controlling it. 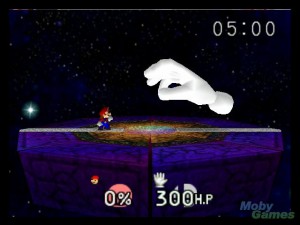 Unlockables
There are 4 characters that you can unlock: Captain Falcon, Jiggly Puff, Ness, and Luigi. They can all be unlocked by beating the one player mode with certain conditions.
Captain Falcon: Beat the game in 20 min. or less in any difficulty. Then defeat captain falcon.
Jiggly Puff: Defeat the game with any difficulty and any number of lives. Then when Purin appears defeat him.
Ness: Finish the game under normal difficulty with 3 lives remaining and without continuing. Then defeat Ness.
Luigi: Complete the 1st bonus stage with the original 8 characters and a bonus character which can be done in the practice. Then defeat Luigi, if you lose to him then you can successfully complete the 1st bonus stage again with any character and you will get a rematch.
There is also one map which you can unlock, mushroom kingdom. To unlock this map you must successfully complete the game under normal difficulty with all 8 original characters, but continues may be used.
The 1 player mode of Super Smash Bros. is still enjoyable and is important to finish in order to unlock the hidden characters so that there are more characters to choose from in multiplayer. Also having a bonus map is nice in case if you are already bored of all the other maps.
This entry was posted in General Posts. Bookmark the permalink.