Posted on October 24, 2011 by Giovanni Lombardi

Online poker has made it possible for people all around the world to come together via the internet to take part in not only playing the game but in deciding how far one wants to go.  The choices one has when playing online poker are endless, they go from playing with play money suited for a person who places the game for the love of playing to playing in high stake tournaments.    Online poker allows the player to first choose which type of game he/she is interested in playing.  The games choices being; Hold’em, Omaha, Stud, and other which includes elements of the three game choices.  In online Hold’em there are various games that one can play at the same time, each table has a specific category of amounts that one can start with.  A player can choose to play at a table with a high amount which can range from $15/$30 to  $1000/$2000, a table with a medium amount which ranges from $5/$10 to $10/$20, a table with a low amount ranging from $0.50/$1.00 to $3.00/6.00, a table with a micro a table with a micro amount ranging from $0.02/$0.04 to $0.25/$0.50, or a player can choice to play “all” and decide to play any range at the same time.  Hold’em also allows the player to choose a no limit/pot limit game with high, medium, low and micro amounts to bet, and a play money game with a fixed limit, a no limit, and a pot limit amount.  A player can choose to play Omaha poker which has two games; Omaha and Omaha Hi/Lo.  With Omaha the player is dealt 4 cards, 5 community cards are placed on the table for all players to use to make the best hand with 5 cards.  Omaha Hi/Lo enables the highest 5 cards and the lowest 5 cards to win, splitting the pot.  Omaha ranges from play money to $200/$400; Omaha Hi/Lo ranges from play money to $1000/$2000.  Another game a player can choose to play is Stud. Online Stud has 4 catergories to choose from, 7 card Stud , 7 card Stud Hi/Lo, Razz and Triple Stud.  Seven card Stud ranges from play money to $100/$200, 7 card Stud Hi/Lo ranges from play money to $100/$200, Razz ranges from play money to $100/$200 and Triple Stud which Ranges from play money to $30/$60.  In 7 card Stud only the best 5 card hand wins, in 7 card Stud Hi/Lo the pot is split between the best 5 card hand and lowest 5 card hand, in Razz the lowest 5 card hand wins and in Triple Stud 3 different games are played in a determined time period.  In the first time period 7 card Stud is played followed by 7 card Stud Hi/Lo and ending with Razz.  Beside these basic games, a player can choose to play “other” section with allows the player to choose from 3 different games; Draw, Mixed games and Badugi.  The game Draw has 3 different versions; 5 card Draw, 2-7 triple Draw and 2-7 single Draw.   Mixed games has $ different versions; 8-game, horse, Hold’em/Omaha and Triple Stud. Badugi allows the player to have a different ranges of buy in’s

With online poker, a player can also participate in different tourneys which range from VIP, to Regular, to Satellite, to Tourney Special.  To play in the VIP tournament a player needs to have obtained a centain status which goes from Bronze Star, Silver Star, Gold Star, Platinum Star to Super Nova.  Bronze Star involves players with the lowest status and Super Nova involves players with the highest status.  Regular tournaments allows  everybody to play regardless of status.  Regular tournaments have different ranges of buy in’s thereby giving everybody the opportunity to participate at his/her comfort range.  Satellite is also open to anyone wishing to participate regardless of status, this tournament allows the winning participant to enter into a larger tournament. In the satellite tournament the player can use money, points earned in previous games, or a player can re-buy entry into this tournament.  There are also Special tournaments which occur at various times, these to are open to any particiapant.  A participant can choose to play in freeroll tourneys where the player puts no money in and if he/she wins, wins money or wins a ticket to participate in a tournament.  Regional tourneys are tournaments where players play in selected parts of the world and private tourneys are small tournaments for beginners to give them a feel of the tourney experience..

Another interesting component that online poker offers players is Home Game.  In Home Games the participant creates his/her own club to play with an invited group of friends. The group of friends choose which poker game to play, and what the betting amount is.  This component allows a group of friends to come together at a poker table without having to their homes, the game has the same dimensions as if this group were sitting at a poker table at a friend’s house, what obviously is missing is the physical human interaction.

Online poker provides a world of playing opportunities and possibilities. It exposes players to the various poker games, it teaches a person who knows nothing about poker the rules and regulations associated with the game. A player can pick up strategies from other players, a player can also chat with the other players to share opinions, views and strategies. Online poker can be a means of people coming together to play just for the fun of playing, playing with play money and thereby not risking anything, just having fun, or it can be a means of gambling and thereby risking a considerable amount. It is up to the individual player therefore to keep his/her involvement in perspective. Games are created to be played, games not created to play the player. 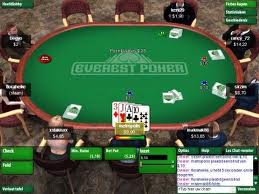 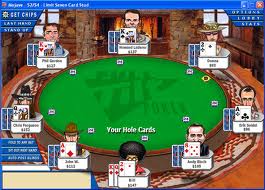